WWoHP Food Testing in Hollywood – What to Expect

It was raining, it was dark out, and once we were escorted into the park, we were greeted with smiles and a fresh butterbeer and thus ushered into the most famous Harry Potter pub, the Three Broomsticks.

I don’t know about you, but I couldn’t have asked for a better setting to be introduced to the Hollywood Wizarding World – I felt like I was actually transported into the books. Right as you enter the park, Hogsmeade awaits you, with the Hogwarts Express off to your right. Then you have Weasleys’ Wizard Wheezes Joke Shop on your left, followed by Honeydukes – leading straight up to the Three Broomsticks. Upon our arrival, we were given complimentary drinks, and you could hear music from Harry Potter and the Prisoner of Azkaban in the background, along with occasional snorts and grunts from the hog head that was plastered in the middle of the wall behind the cashiers at the bar.

There were unlimited drinks, but of course, they were alcoholic, so unfortunately, being underage, I was unable to partake in ALL of the festivities they had to offer. However, I can say with all accuracy that butterbeer is now my favorite beverage.

It is a sweet concoction that tasted of butterscotch and had the texture of a smooth slushy – simple, but one of the most famous drinks to grace the Harry Potter world and as of right now, definitely my favorite. After we enjoyed the drinks, we were ushered into the second part of the pub – the room where the feast took place. Prepared by a British chef, we were introduced to breakfast, lunch/dinner, and dessert.

I wished that I had a larger stomach because I wasn’t able to try everything, but I can assure you that their presentation was scrumptious to look at. Buffet style is a marvelous way to present it.

The lunch/dinner was served up first and consisted of the Great Feast; shepherd’s pie with garden salad; fish and chips’ lemon herb-roasted chicken; a spare ribs platter; turkey leg; bangers and mash; beef, lamb and Guinness stew; English ale and cheese soup; and a vegetable entrée! 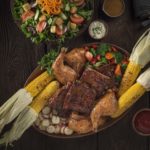 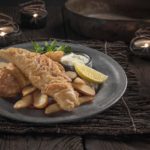 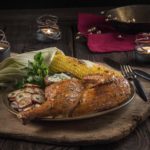 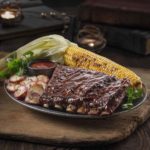 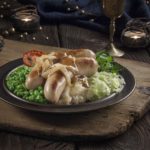 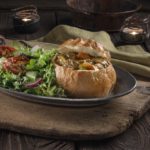 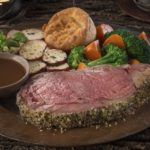 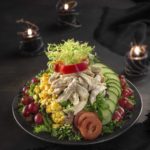 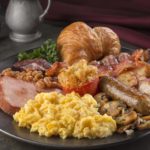 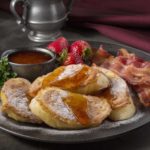 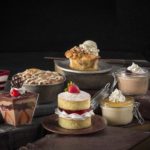 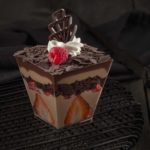 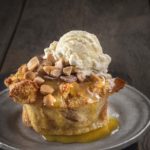 It was an extensive list that was matched with tasty flavors. The lemon herb-roasted chicken wasn’t any different from any other chicken I had tasted, albeit a little dry, while the spare ribs were delicious, and the sauce was a maple and brown sugar mix that wasn’t overpowering. However, my favorite lunch/dinner meal was definitely the bangers and mash. In American terms, it’s a grilled English sausage that’s joined by creamy mashed potatoes.

The breakfast – traditional breakfast and eggy bread – was brought out next. After that, the dessert was ready for us. My suggestion to you: Don’t overeat any of the meals or else you won’t have the room for the delicious sweets that want to be devoured.

Overall, it was a satisfying taste test that exhibited the success of the restaurant. All I know is, I can’t wait for the park to officially open on April 7, just so I can go back and eat the other meals to my heart’s content!