Continuing on with House Pride Month and Women’s History Month, let’s look at another founder of Hogwarts, Ms. Rowena Ravenclaw.

Rowena Ravenclaw was born during the tenth century in Scotland. Renowned for her creativity and intelligence, Rowena was one of the greatest witches of her age. She was most often referred to as beautiful but intimidating. Rowena was tall, with fair skin, long black hair, and dark eyes. Some of her most noteworthy traits were her intelligence, creativity, forgiving nature, and pride.

Magical historians are unsure how or when Rowena received a wand, but she managed to get herself one. One theory is that she bought the wand from a member of the Ollivander family. This is quite possible, seeing as how the Ollivanders have been creating wands since 382 BC. The other theory in circulation is that she created the wand herself. At some point during her life, Rowena gave birth to a beautiful baby girl named Helena. She also made a magical diadem that enhanced the wearer’s mental ability.

Rowena’s most famous achievement was aiding in the founding of Hogwarts around 993. It is theorized that Rowena came up with the name and location of the school from a dream that she had. She was also the creator of the castles continuously changing floor plan. Rowena made the decisions regarding the students she selected for her House based on the values she prided herself on. This House prides itself on wisdom, creativity, cleverness, and a ready mind.

Rowena died in the eleventh century after falling grievously ill. The legend surrounding her death is that she died of a broken heart from her daughter’s betrayal.

Rowena Ravenclaw was definitely a witch ahead of her time. Not only was she the founder of one of the most prodigious wizarding schools in Europe, but she also designed the entire campus. The name, the location, even the castle itself, were all courtesy of Rowena. What other witch or wizard could have come up with an ever-changing blueprint? Also, though it is only a theory, she possibly created her own wand. Locating the proper wood and core combination for herself would have proved a challenge, although it probably would have been easier with the magical diadem that she created. I would love a magical headdress that increased my intelligence.

Break out your blue and bronze and represent Ravenclaw today! Happy Ravenclaw Day!! 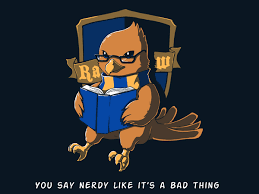