Maggie Smith Proves Once Again That She Is a Rock Star

On March 31, a private lunch was held at the National Liberal Club, honoring the winners of the 2015 Critic’s Circle Award. Among the worthy candidates was none other than Dame Maggie Smith who was presented the Critics’ Circle Award for Services to the Arts, receiving an engraved crystal rose bowl. 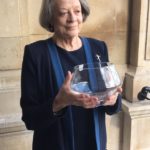 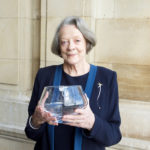 Even under the weather, she was honored to step behind the microphone and did so with true grace and beauty. Retelling stories from the beginning of her acting career, she tells a memorable one about the time she picked up a newspaper during the filming of Othello and read a negative review.

There was a review in there, and it was absolutely lethal and truly frightening. It was for The Master Builder at the National, and I remember bursting into tears.

With her during this moment in history was her Othello co-star, Frank Finley, who gave her a great big hug followed with a particularly laughable piece of advice:

What you must think about is how many actresses you’ve made very happy.

Of course, her role in Othello would soon go on to earn her her first Oscar nomination, but she was scared nonetheless. Little did she know that she would eventually go on to rule the world of theater, film, and television.

Her Wikipedia page has a longer list of accomplishments than anyone I have ever seen, prompting me to question my top five favorite roles she has played (which was very difficult, I might add).

What are your favorite Maggie Smith roles? Let us know in the comments and watch her full acceptance speech for the Critics’ Circle Award for Services to the Arts below!