Usually, we tell a tale of a bride infatuated with the series who falls in love with a soon-to-be groom in desperate need of an initiation to the wizarding world. This is not one of those times. Jessica grew up with the novels and culminated her experience with the infamous lines for the Deathly Hallows films. Jesse, meanwhile, had a preference for the audiobooks and was making his way through the Order of the Phoenix when his cousin decided to play matchmaker. Why not introduce him to a fellow Potterhead she had known? It was an excellent decision.

What followed was a Potter-filled devotion complete with matching Ravenclaw uniforms, cats named Bellatrix and Narcissa, and even a dog named Regulus. In May of 2013, during a visit with family at the Wizarding World of Harry Potter, Jesse guided Jessica to the backdrop of Hagrid’s hut and asked the big question.

They would both work tirelessly planning and budgeting the wedding for the next two years until finally the moment arrived. As the ceremony began, the bridesmaids made their way down to the sound of Beauxbatons’s ethereal entrance music in Goblet of Fire. Similarly, the groomsmen crushed it to Durmstrang’s formidable tune. And Jessica? She wore a gray gown with navy blue accents and a Rowena Ravenclaw-inspired diadem. The bouquet was fittingly fashioned out of a copy of Order of the Phoenix. Flanked by her parents, she glided to Harry’s “Wondrous World,” all the while forgetting her vows. Yet she managed to wing it with only the occasional modification. As for the officiant, according to Jessica,

We found an AMAZING officiant named Scott DeMarco who wrote us a truly magical ceremony that was focused around the world of Harry Potter but also included some nods to another shared love of ours: Doctor Who. In fact, we got married on Amy and Rory’s 5th anniversary and made sure to end our vows with ‘Together, or not at all’.

The couples exited to the sounds of Quidditch World Cup fanfare and made their way to the reception, affectionately dubbed the “Weasley stomp.”  The butterbeer flowed (simple cream soda and butterscotch schnapps) alongside a pumpkin cake topped with a Golden Snitch. Those who wanted to grab some grub could retreat to the themed tables.  The Gryffindor table was comprised of faux-gilded mythological statues, Hufflepuff’s bore strange plants, Ravenclaw’s was adorned with books and bird cages, and Slytherin’s would not be complete without potion bottles.

The magic continued through the themed dance floor with the help of suspended floating candles. Naturally, “Dark Lord Funk” was a popular request. At one point, a Quaffle from the Gryffindor table made its way out to become the belle of the ball. Even as the party wound down, there was another bit of magic just around the corner. The next morning, Jesse and Jessica departed for the very special theme park that was at the core of it all.

Congratulations, Jesse and Jessica! Be sure to pick up some tips from their Q&A below. If you have an event that you would like shared with the fandom, then be sure to get in touch with us. We would love to hear your story.

Q: What's the best piece of advice you have for anyone planning a themed event?

J&J: Give yourself more time than you think you'll need and be flexible! You'll have a vision and sometimes it isn't materializing and pieces you loved individually may look like a hot mess when put together. Just take a moment for yourself and then grab some gold spray paint to make the offenders match!

Q: Were there any proposal/newlywed perks you encountered at the Universal Studios?

J&J: They gave us pins that said "I'm Celebrating!" and wrote "Just Engaged" on them. We also got a book of coupons for the city walk but nothing too exciting. On the honeymoon we got the same pins but with "Honeymoon" on them and people would congratulate us. I took every opportunity to mention that we had a Harry Potter wedding and that resulted in some random perks like being offered the fast line on rides and even some free butterbeer! Both times the Wizarding World workers were kind and so thrilled for us.

Q:  What was the reaction from guests who weren't familiar with the series?

J&J: We were told that our wedding was beautiful and unique by people who weren't familiar with the wizarding world. Our goal was to have a "geek chic" wedding and steer away from some (sometimes tragically awesome) ideas that might look like it came from a HP birthday party plan on Pinterest. We wanted the guests who didn't know Harry Potter to see a beautiful, jewel tone wedding with some quirky things they might not understand and the Potter fans to feel immersed in the wizarding world when they stepped through the doors of the "Great Hall". It seemed to work!

Q: What item from the series would you most want for a wedding gift?

Jesse: Deluminator. No arguing about who has to turn off the light if we've both gotten comfy.

Q: Were there any big modifications made to the plans during the two years?

J&J: The biggest change to our plans was the date itself. I always wanted a fall Harry Potter wedding so when we got engaged in May 2013 we decided on September 19, 2014 (Hermione's birthday). However, as the plans started to be set in motion, we decided to push it to June 26, 2015 (Amy Pond and Rory Williams' wedding anniversary in Doctor Who) to have an extra tax return to budget with. And I got to shop lots of fall clearance sales for the look I wanted! It was a tough decision to make. We couldn't wait to be married! We almost eloped a year before our wedding but it was all well worth the wait. 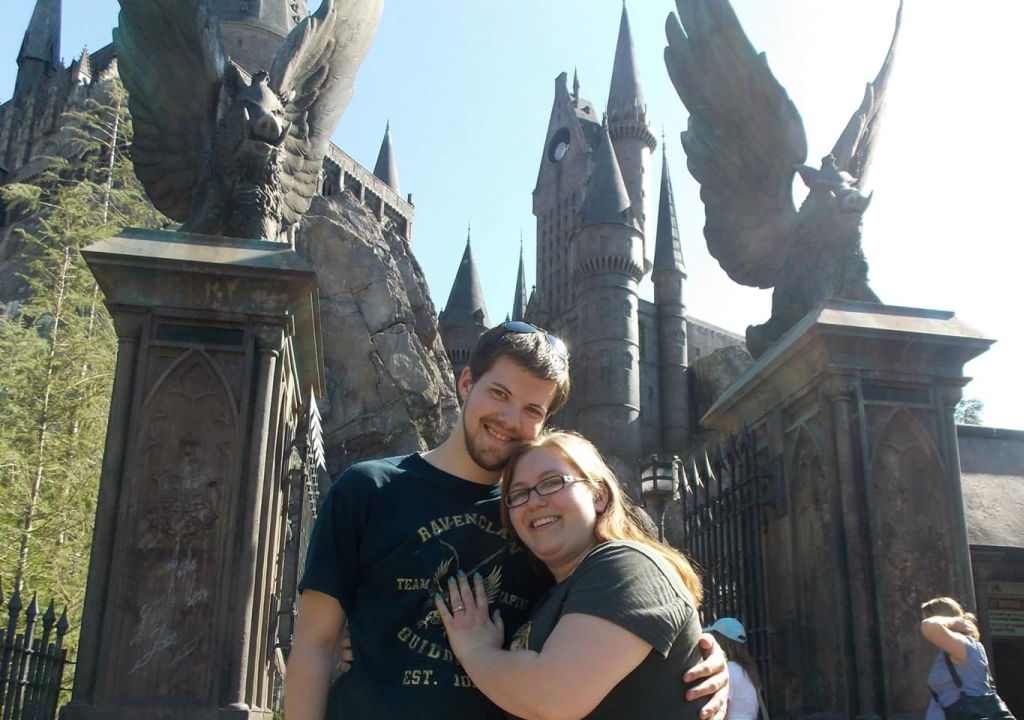 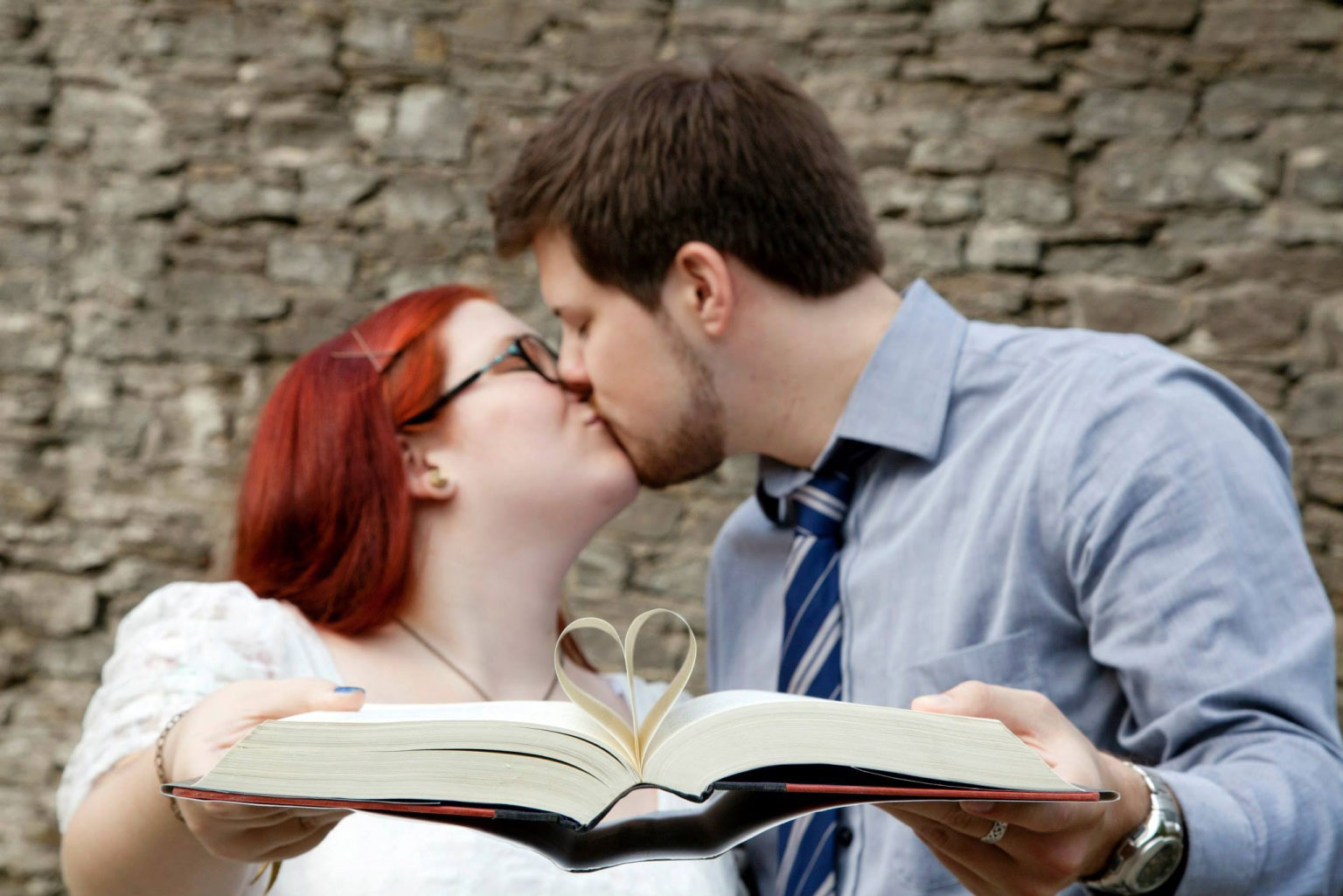 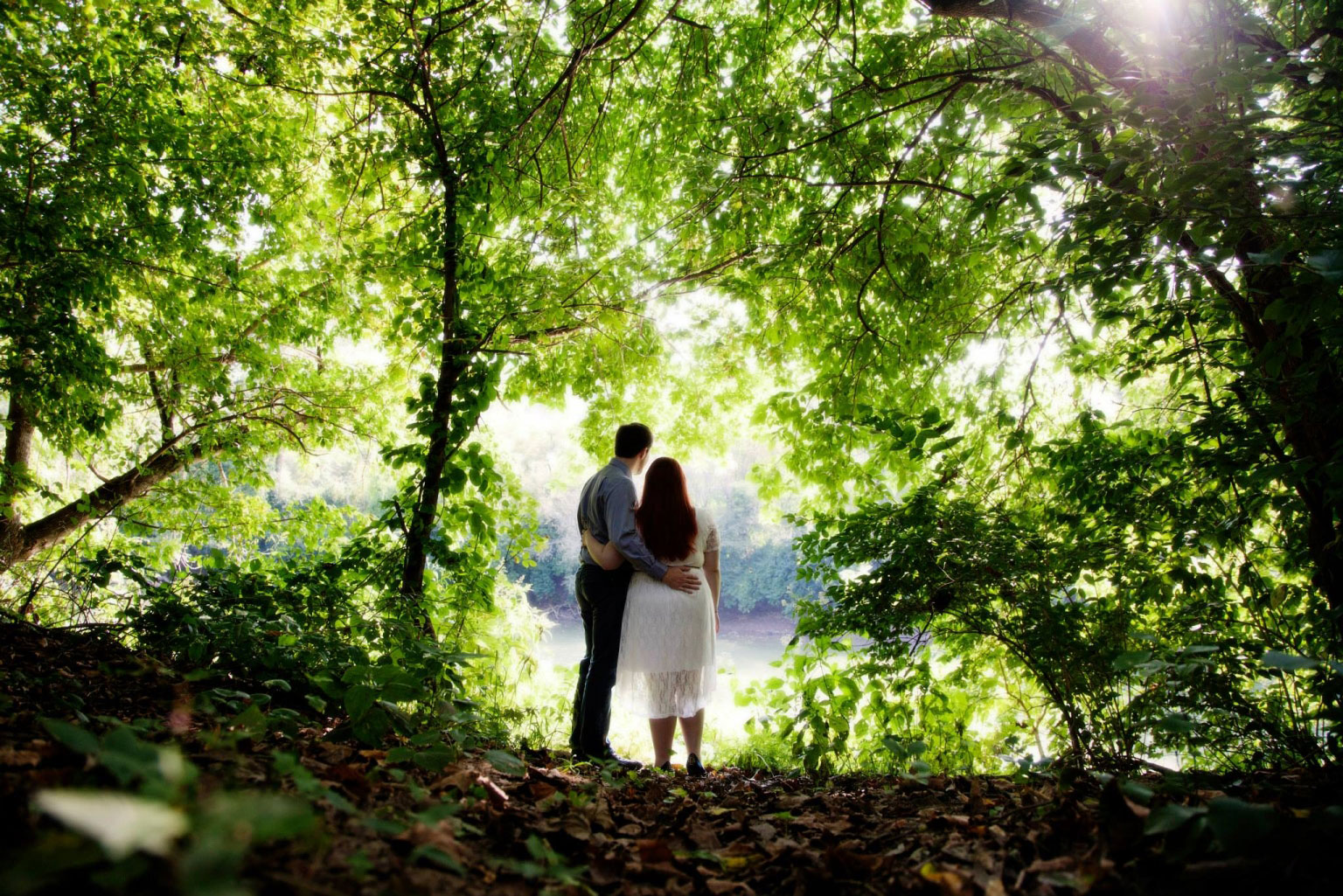 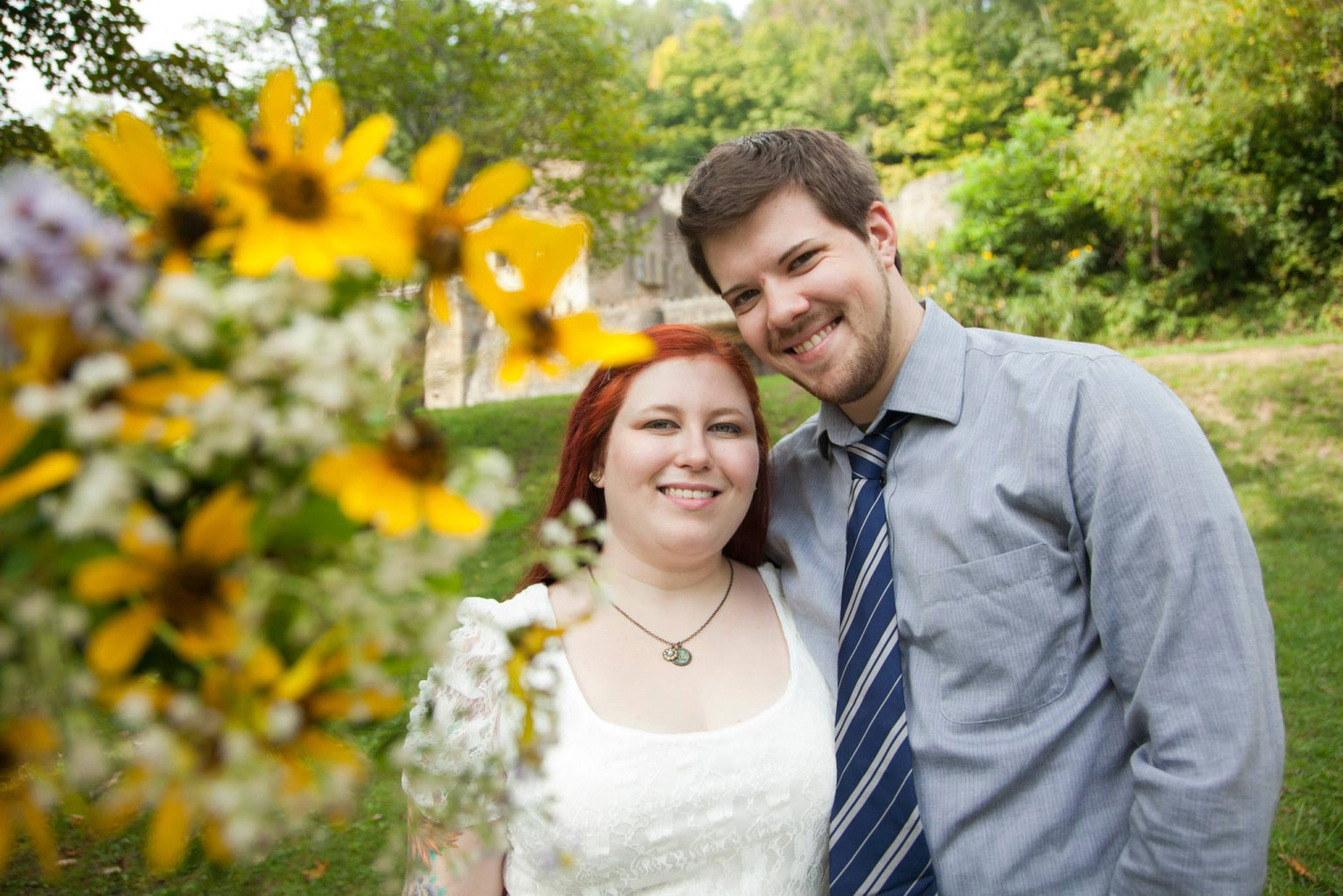 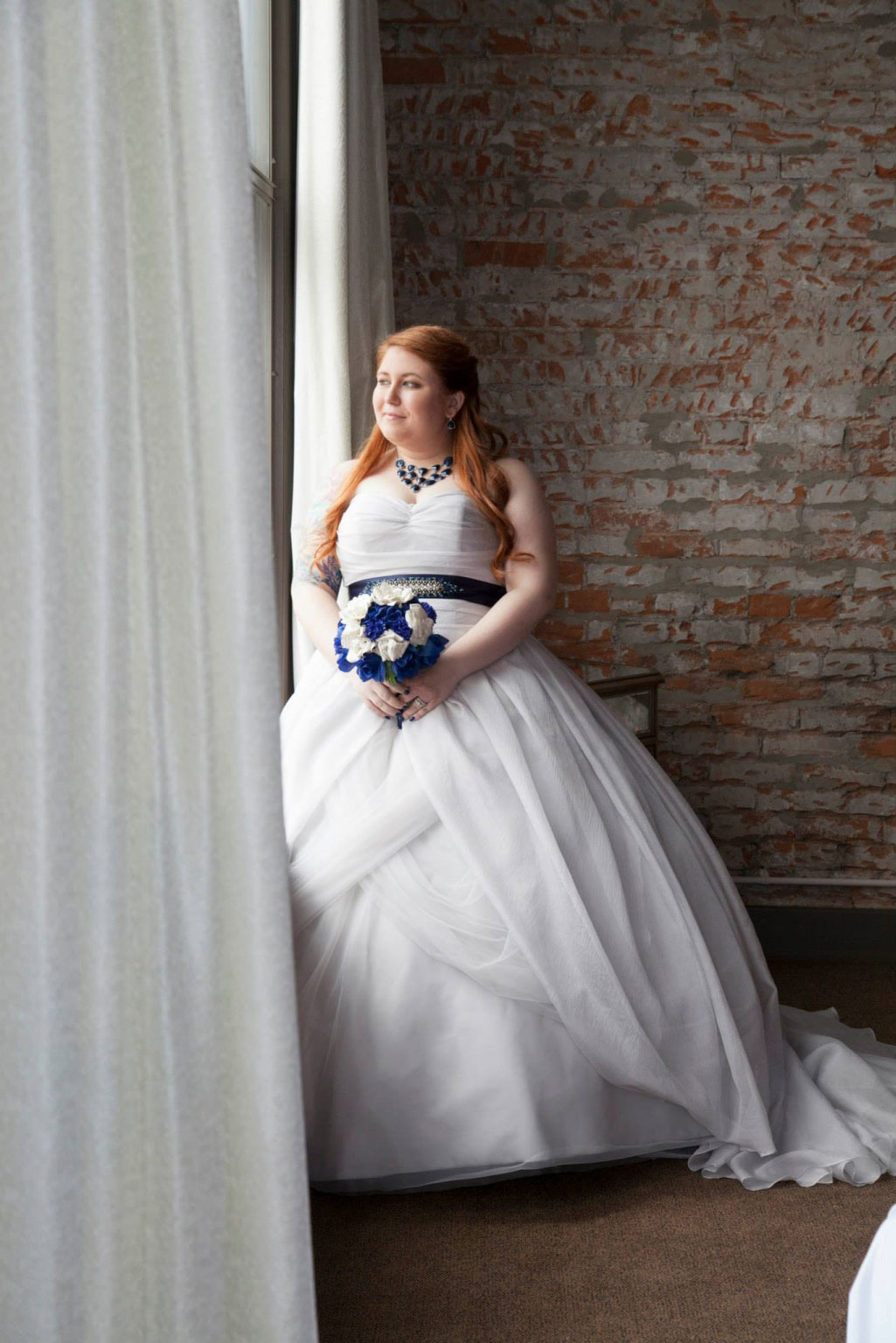 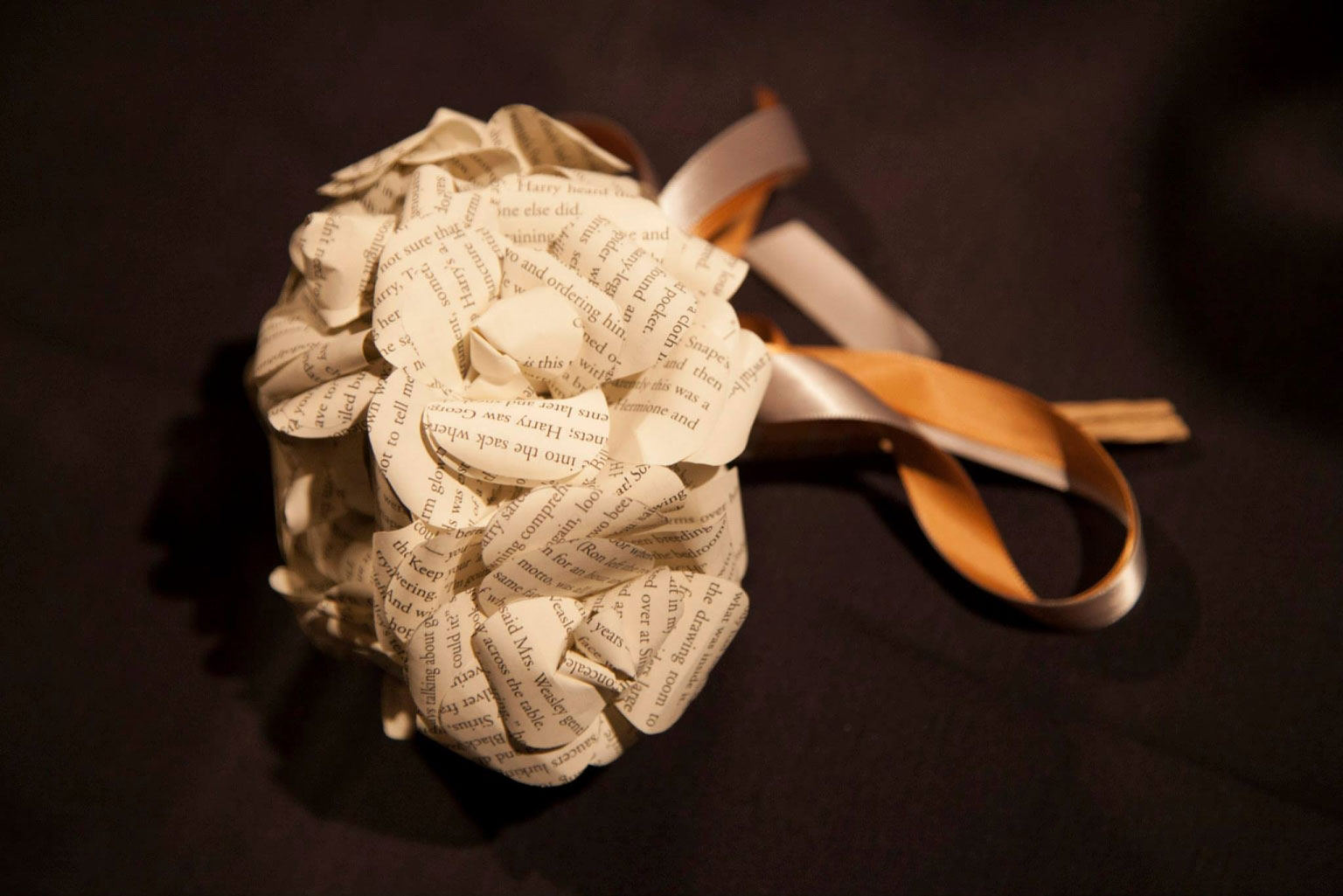 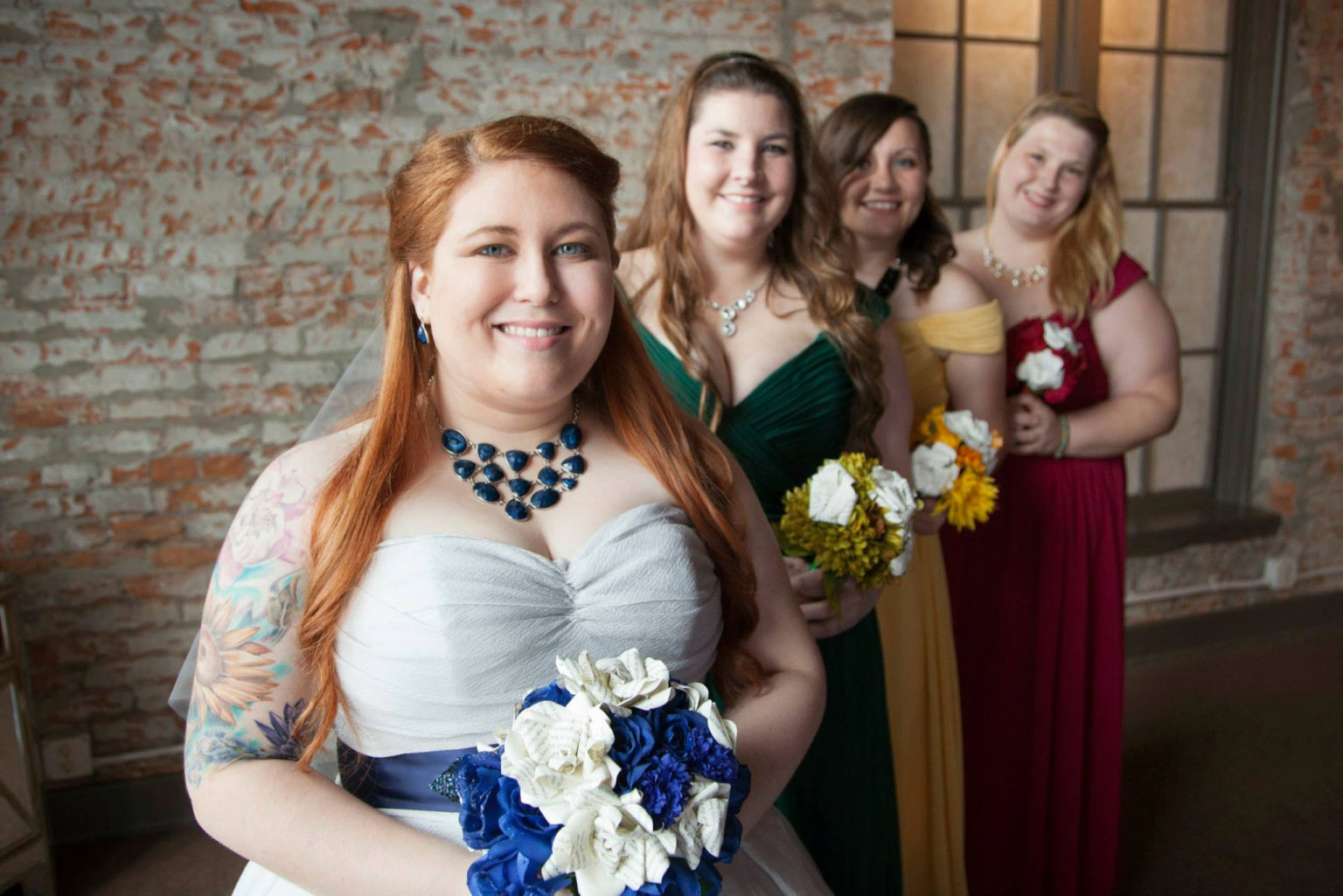 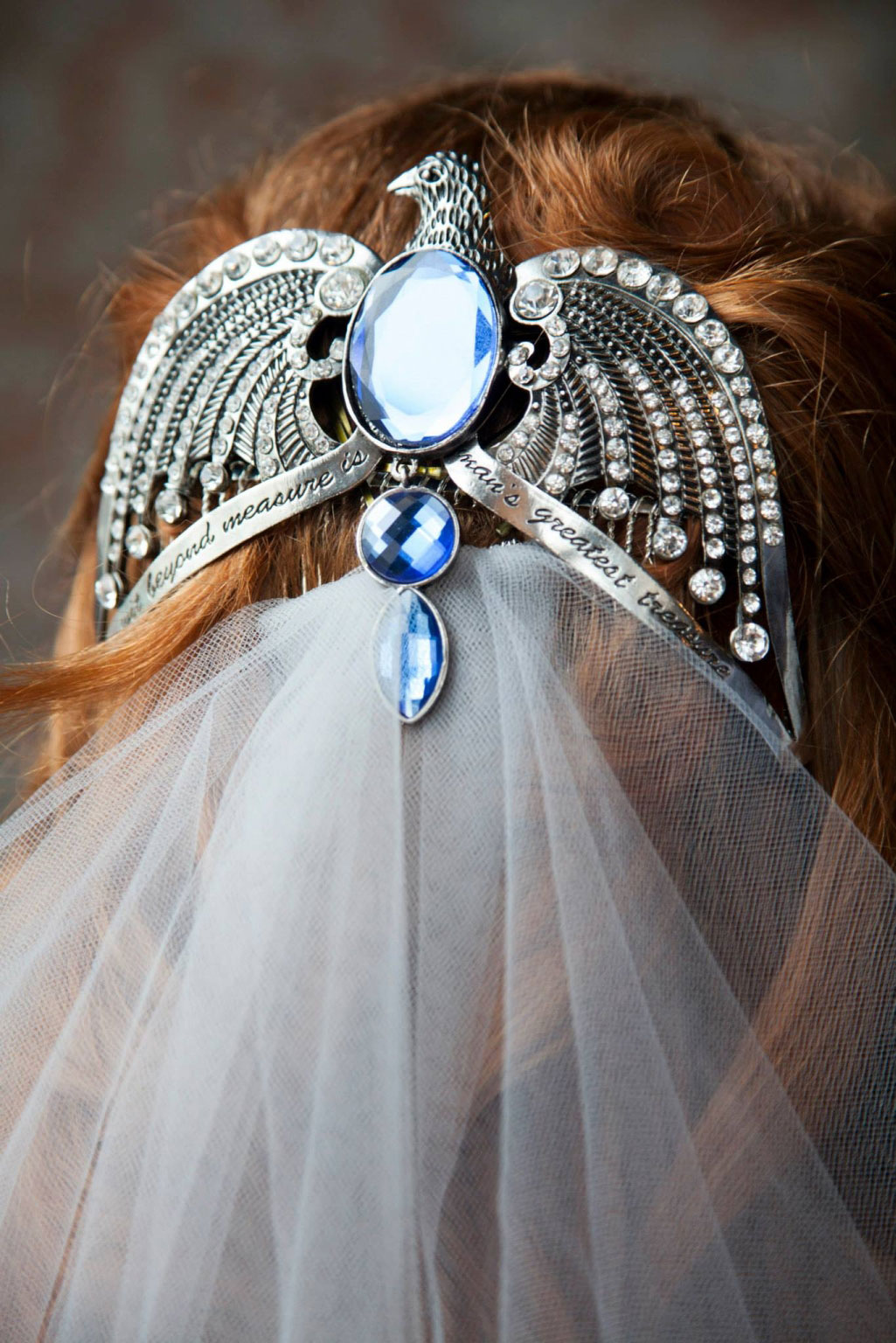 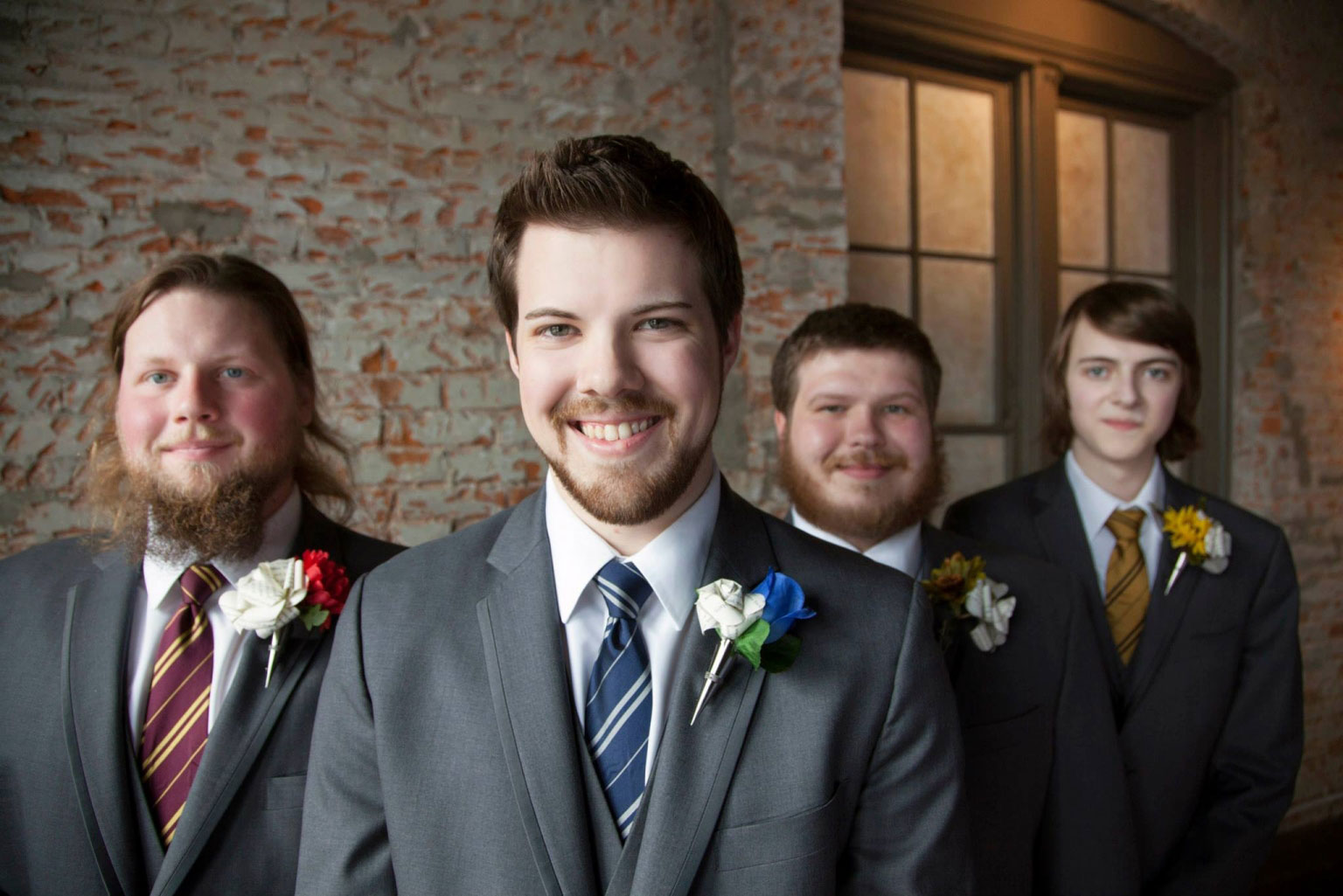 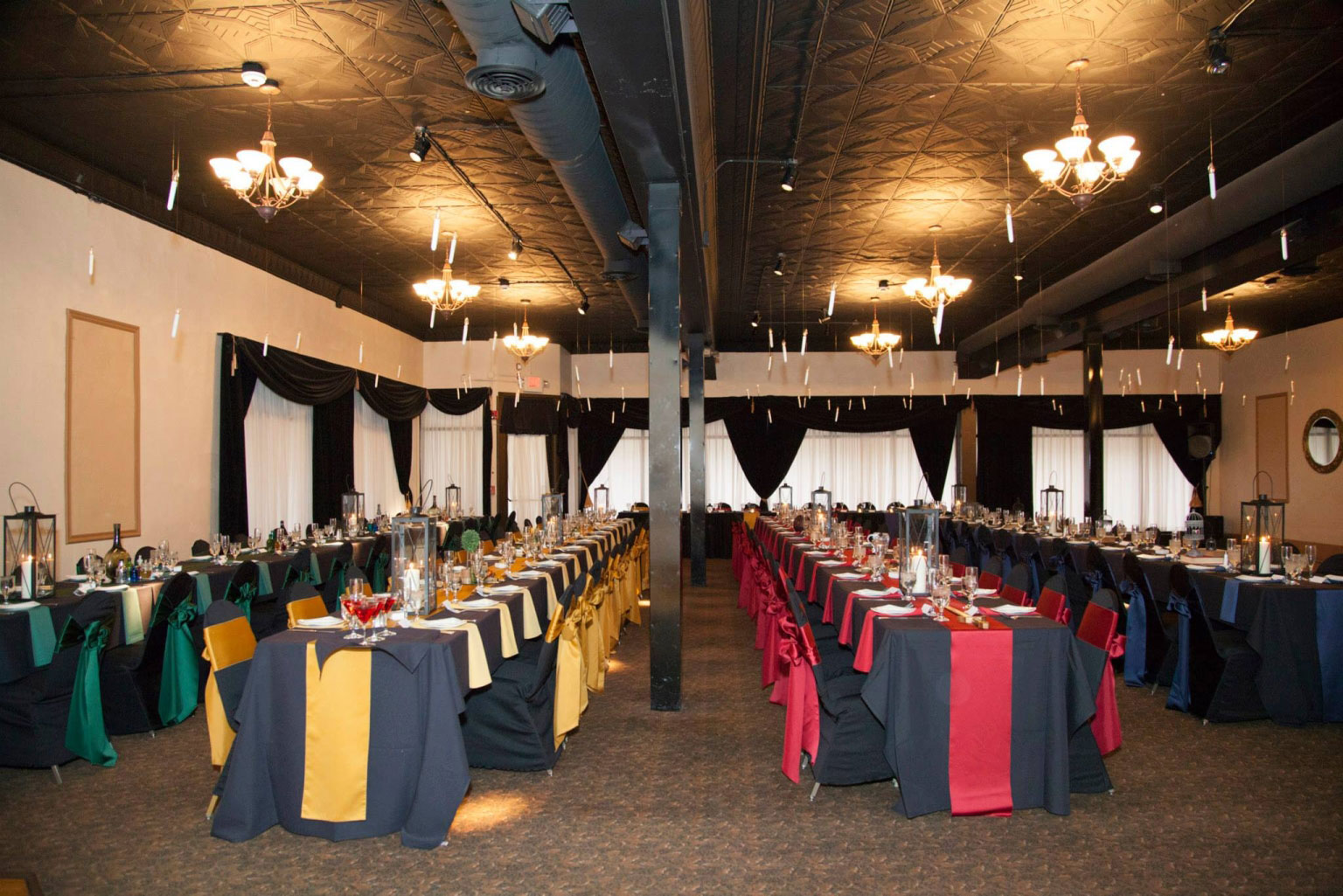 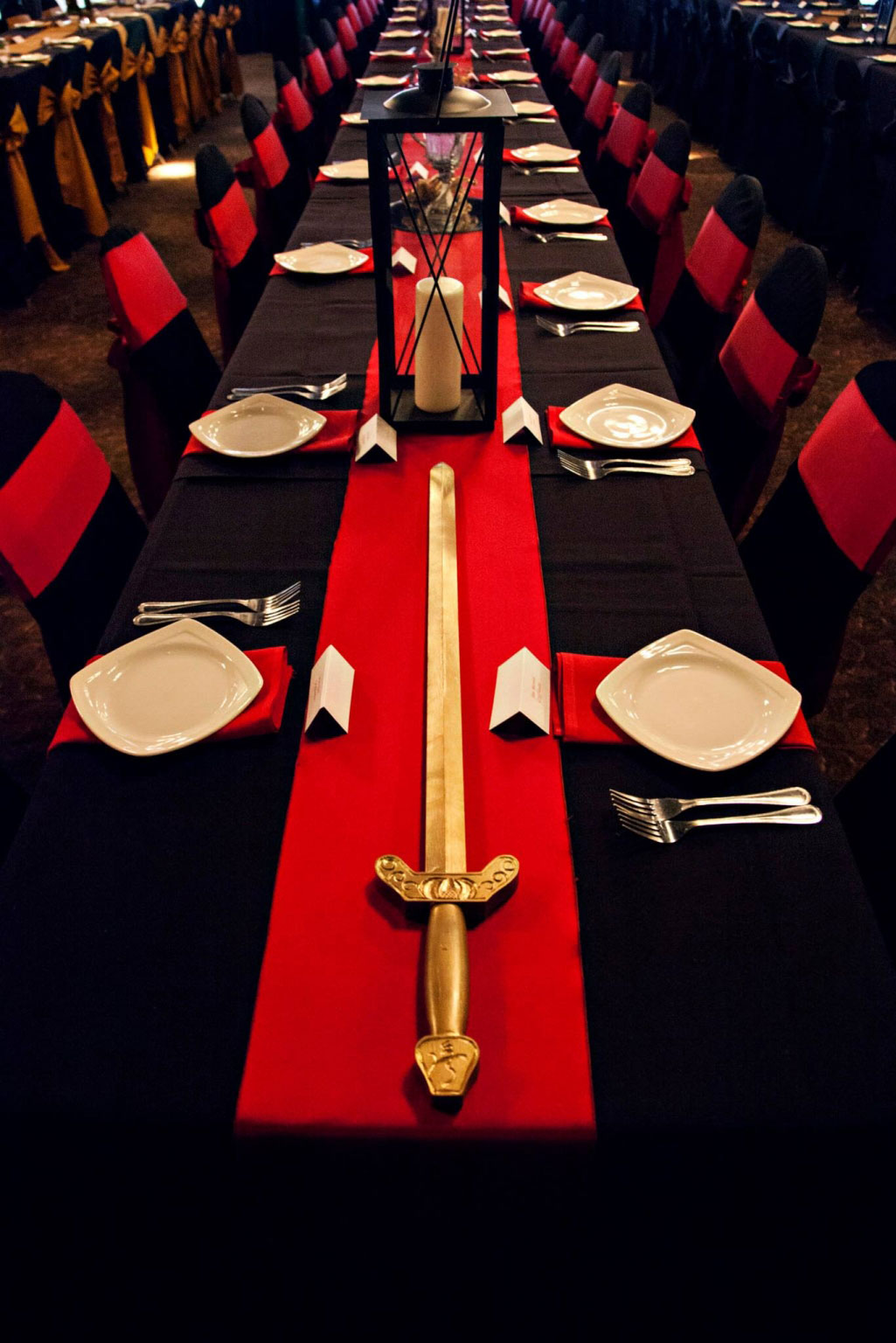 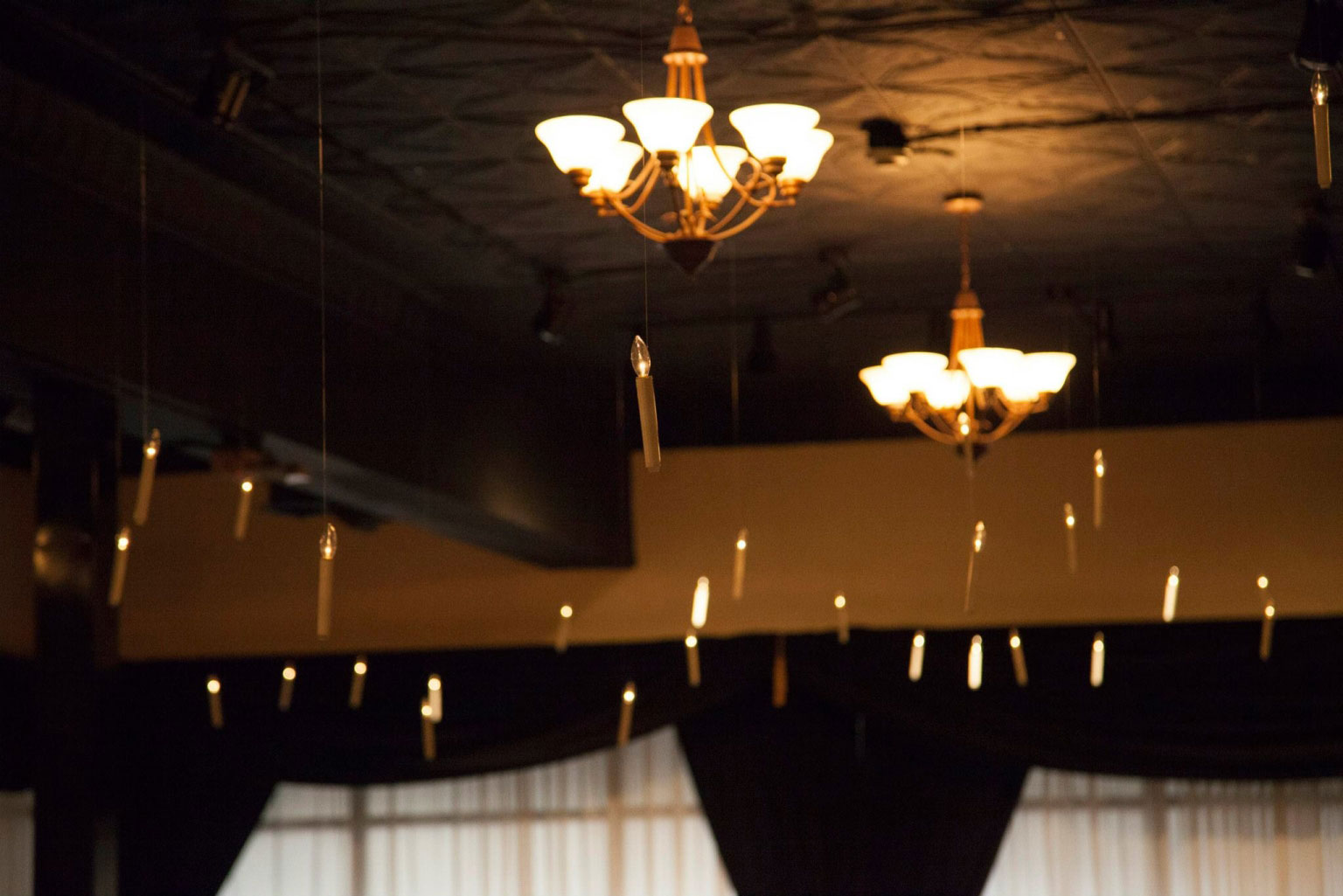 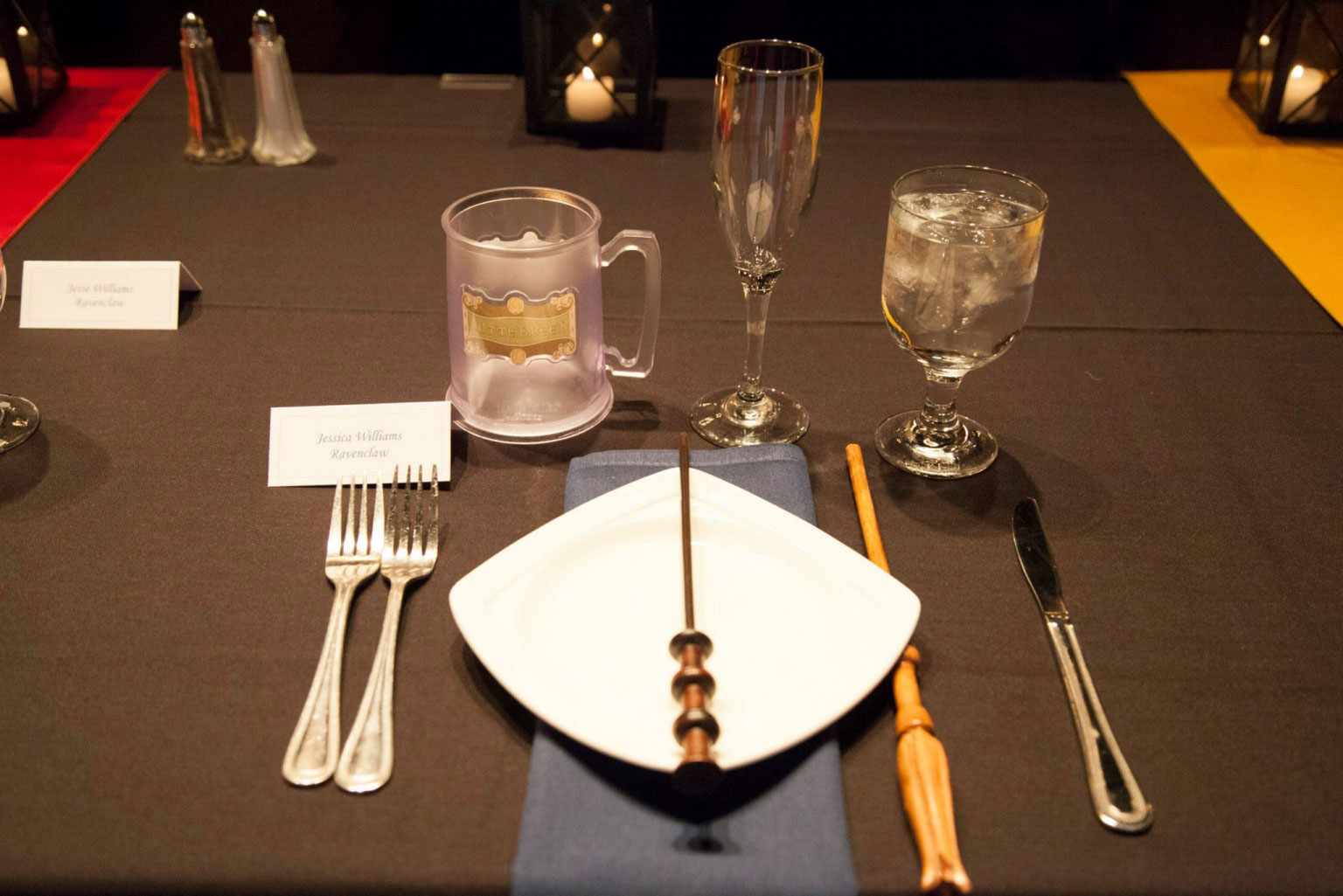 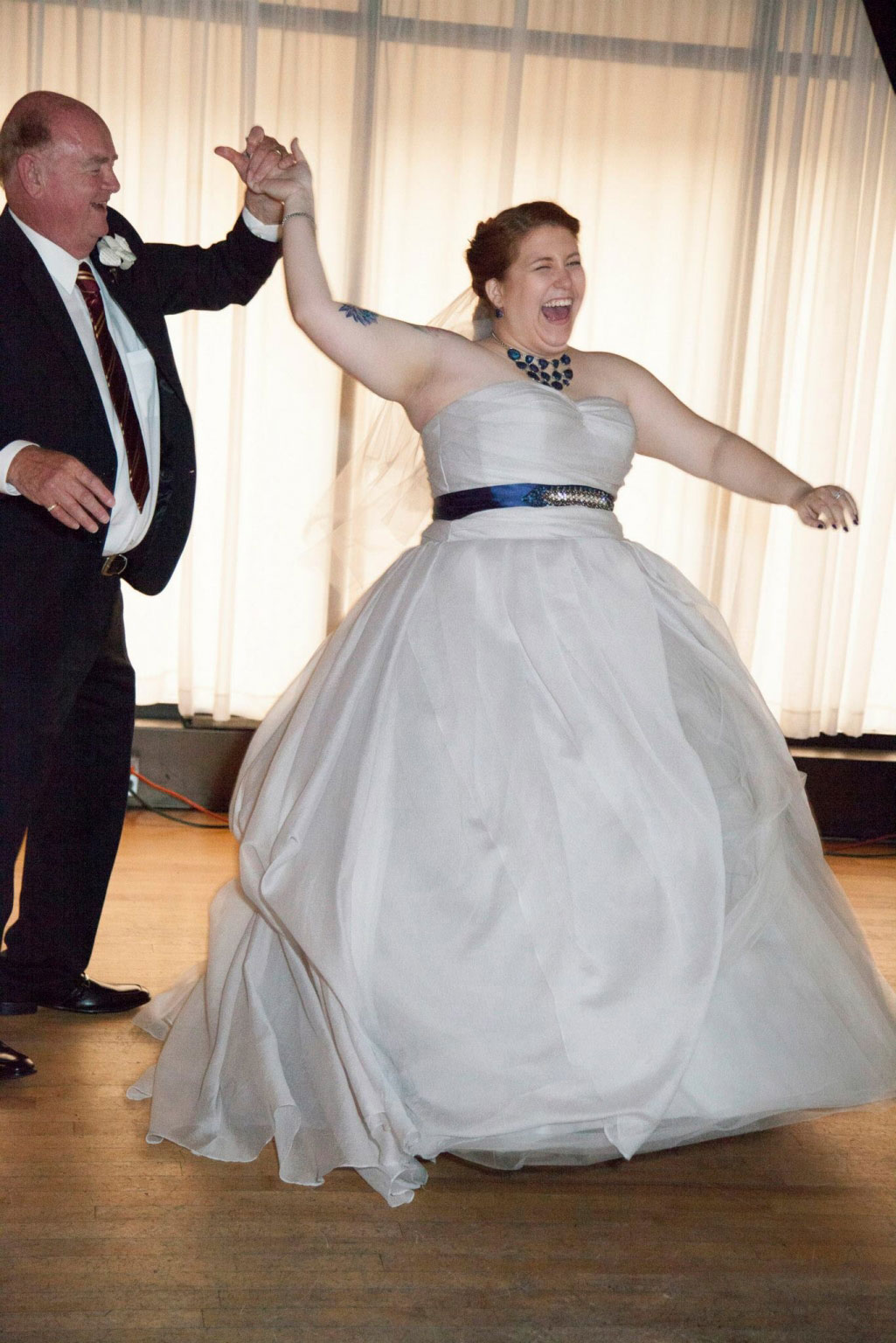 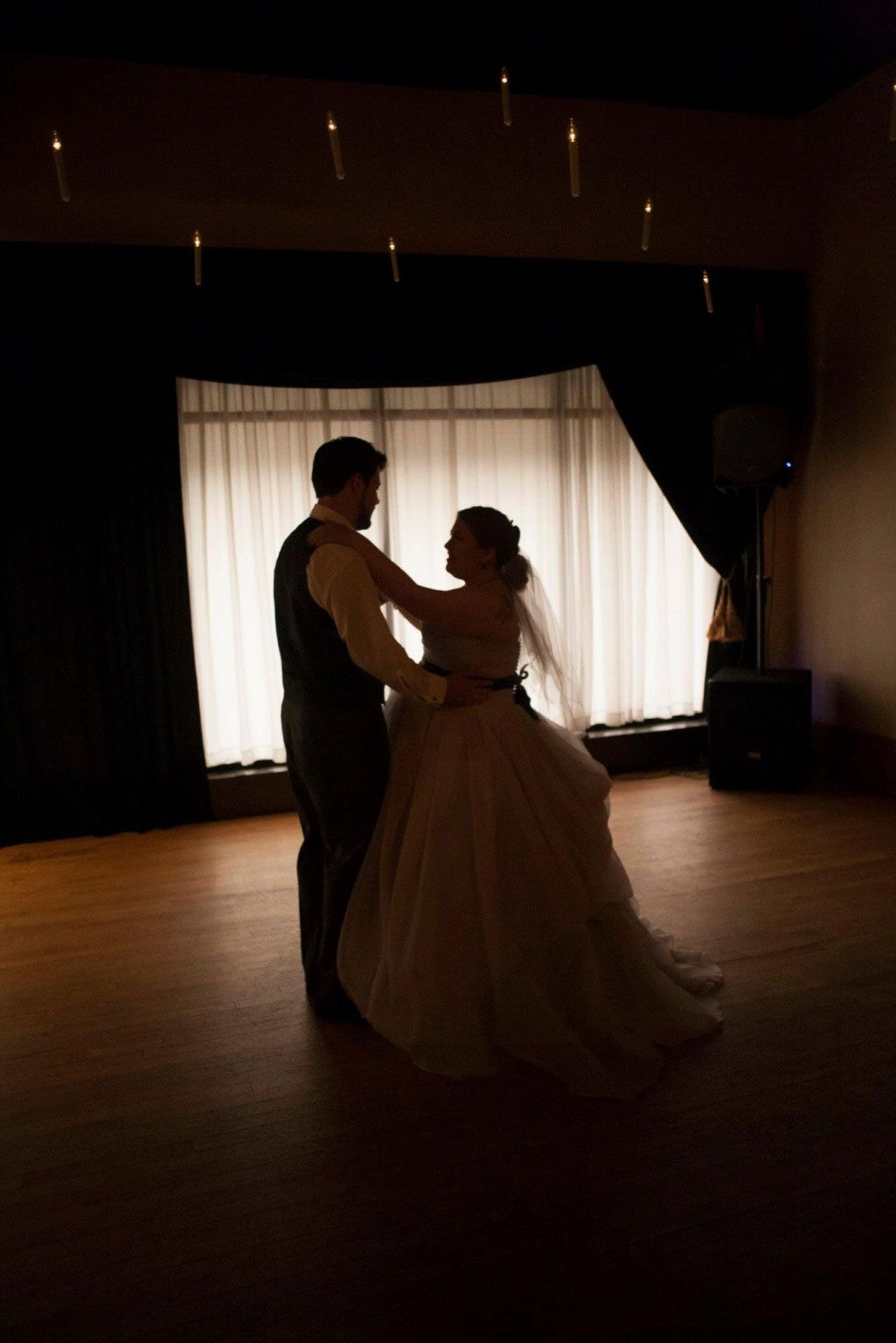 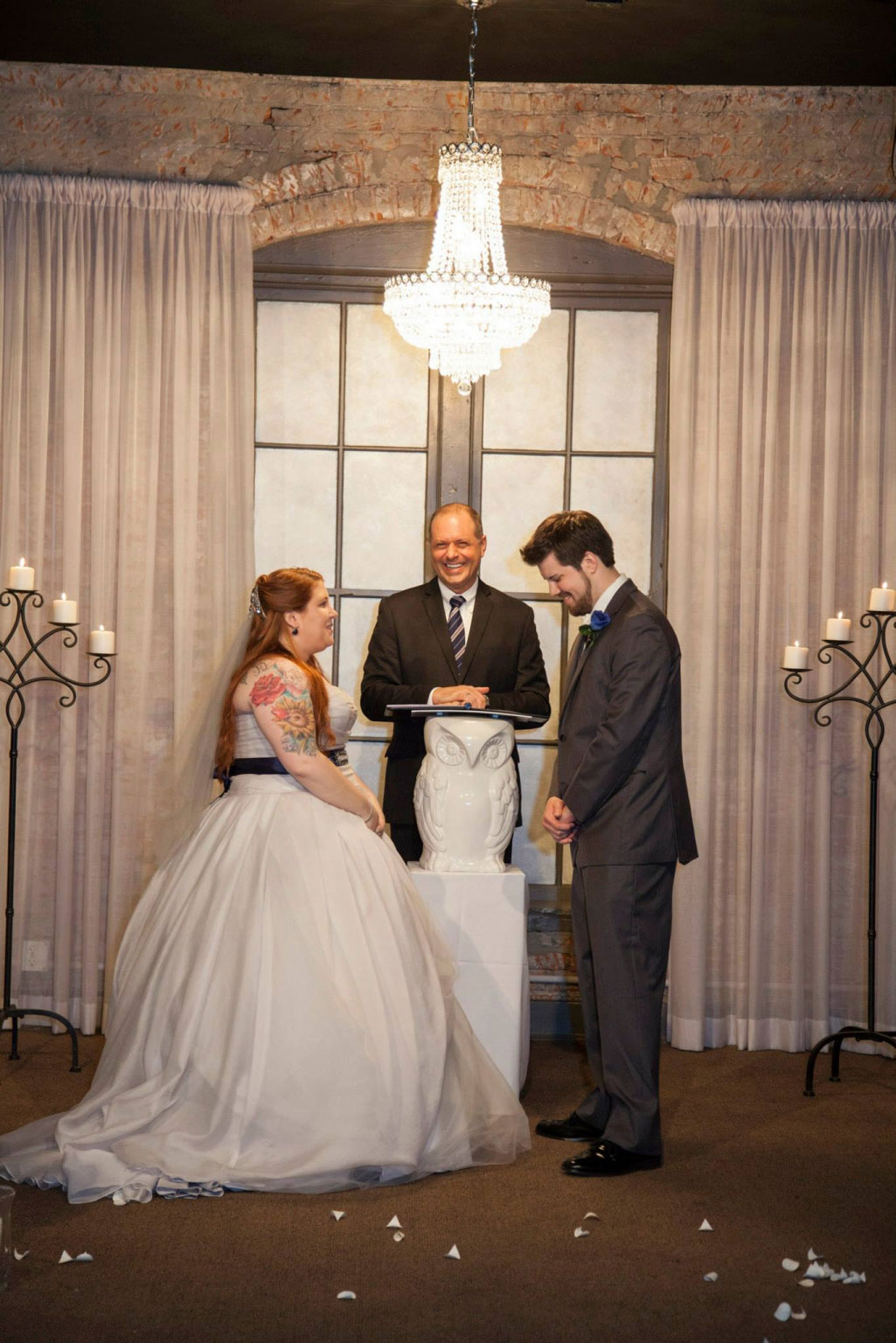 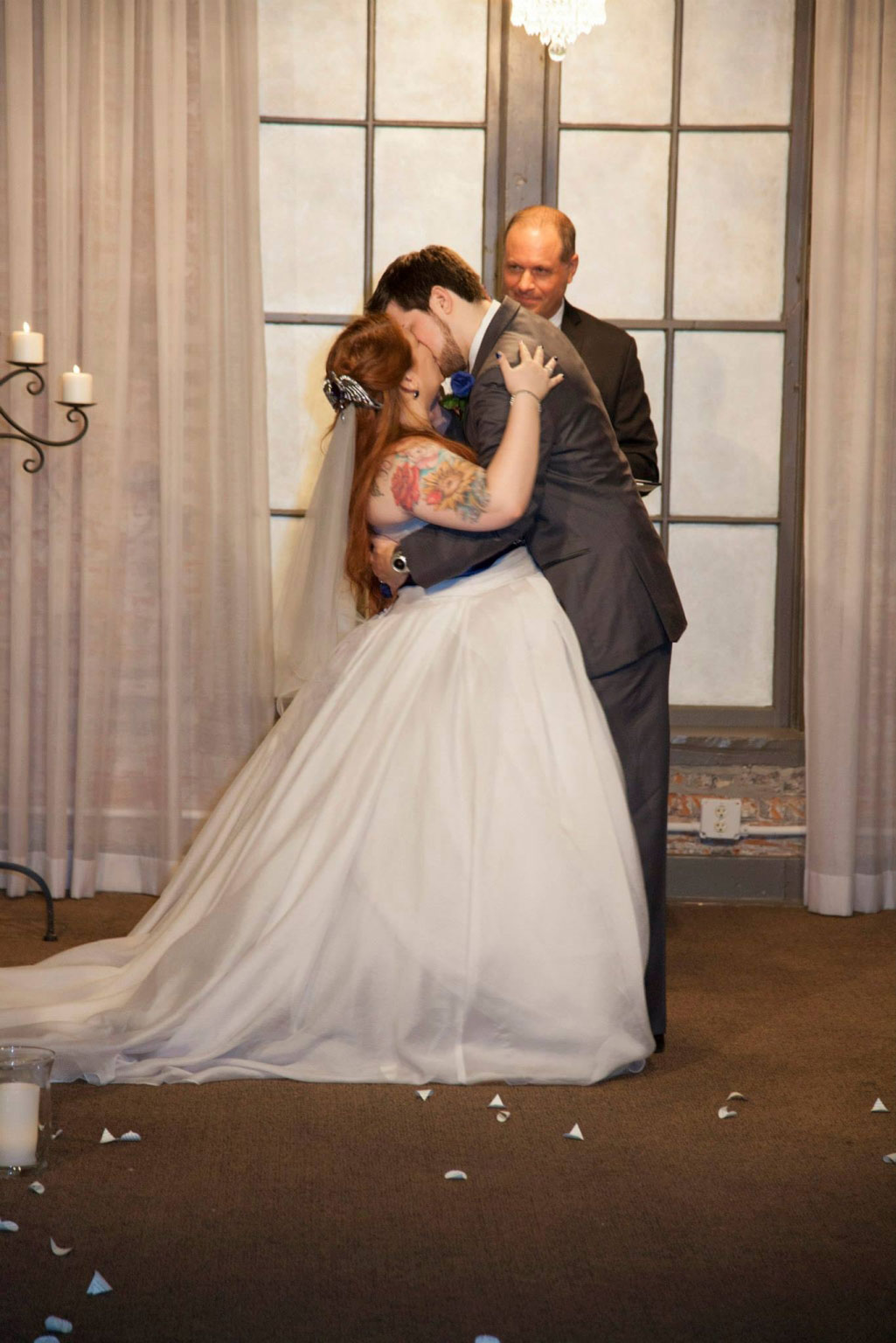 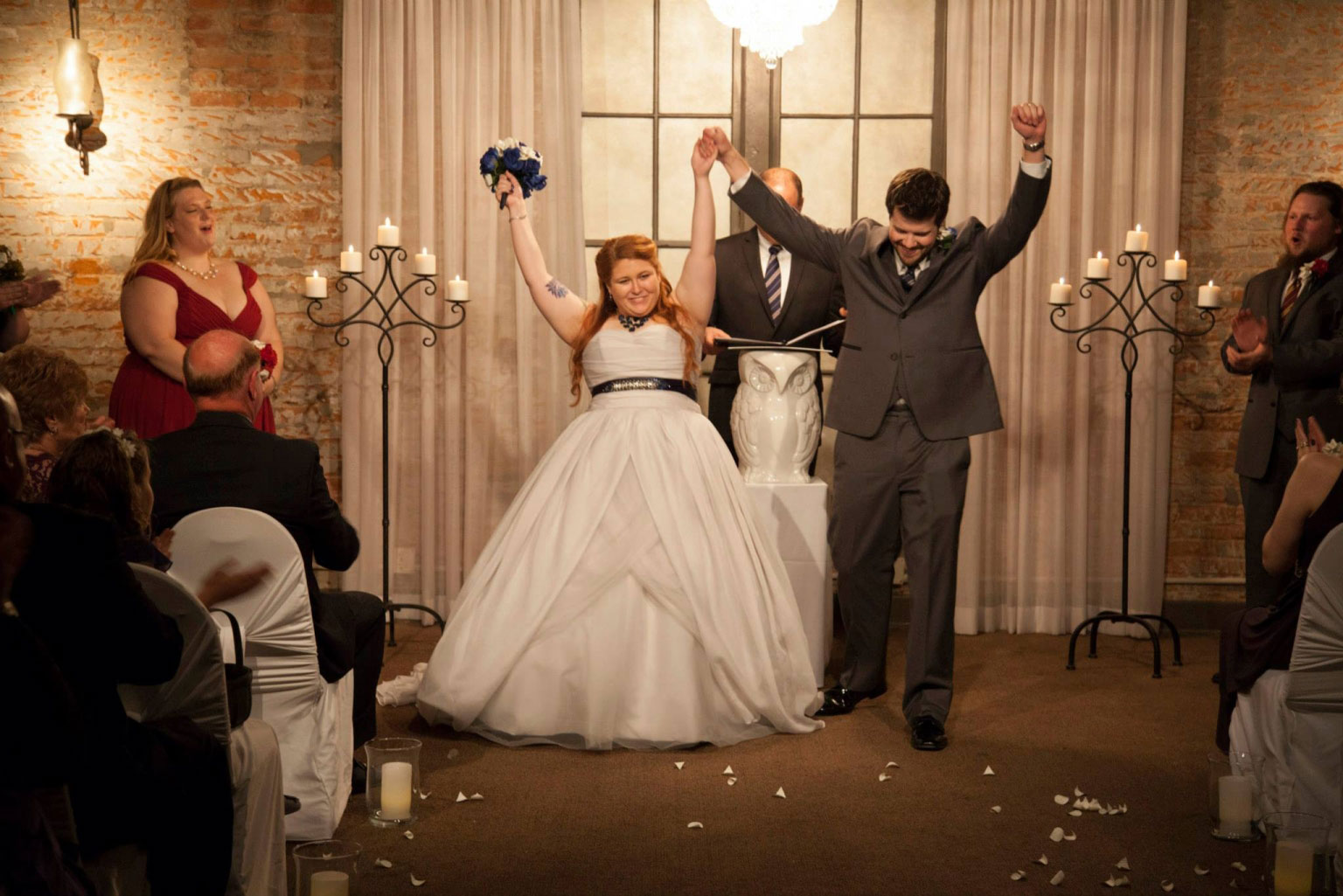 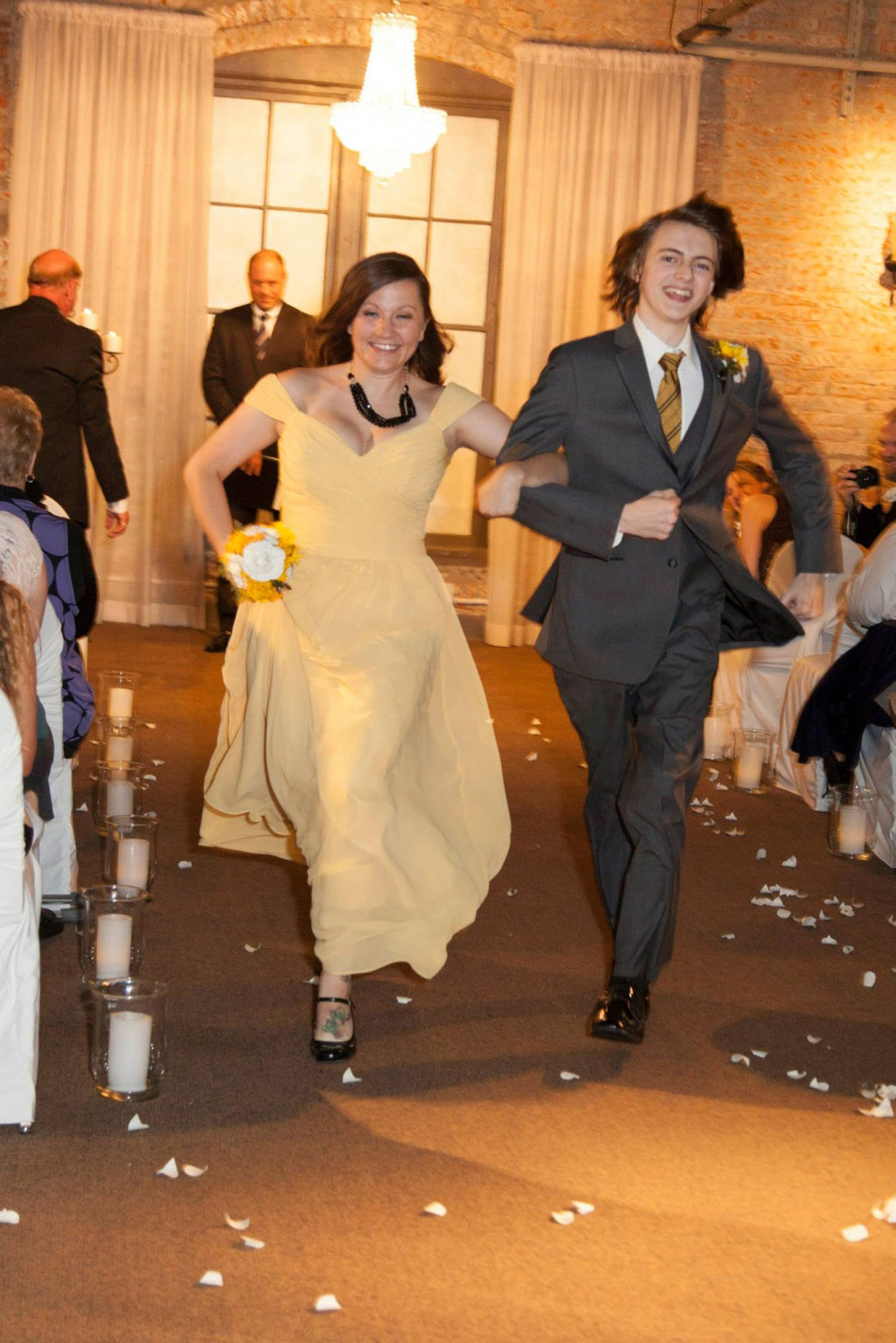 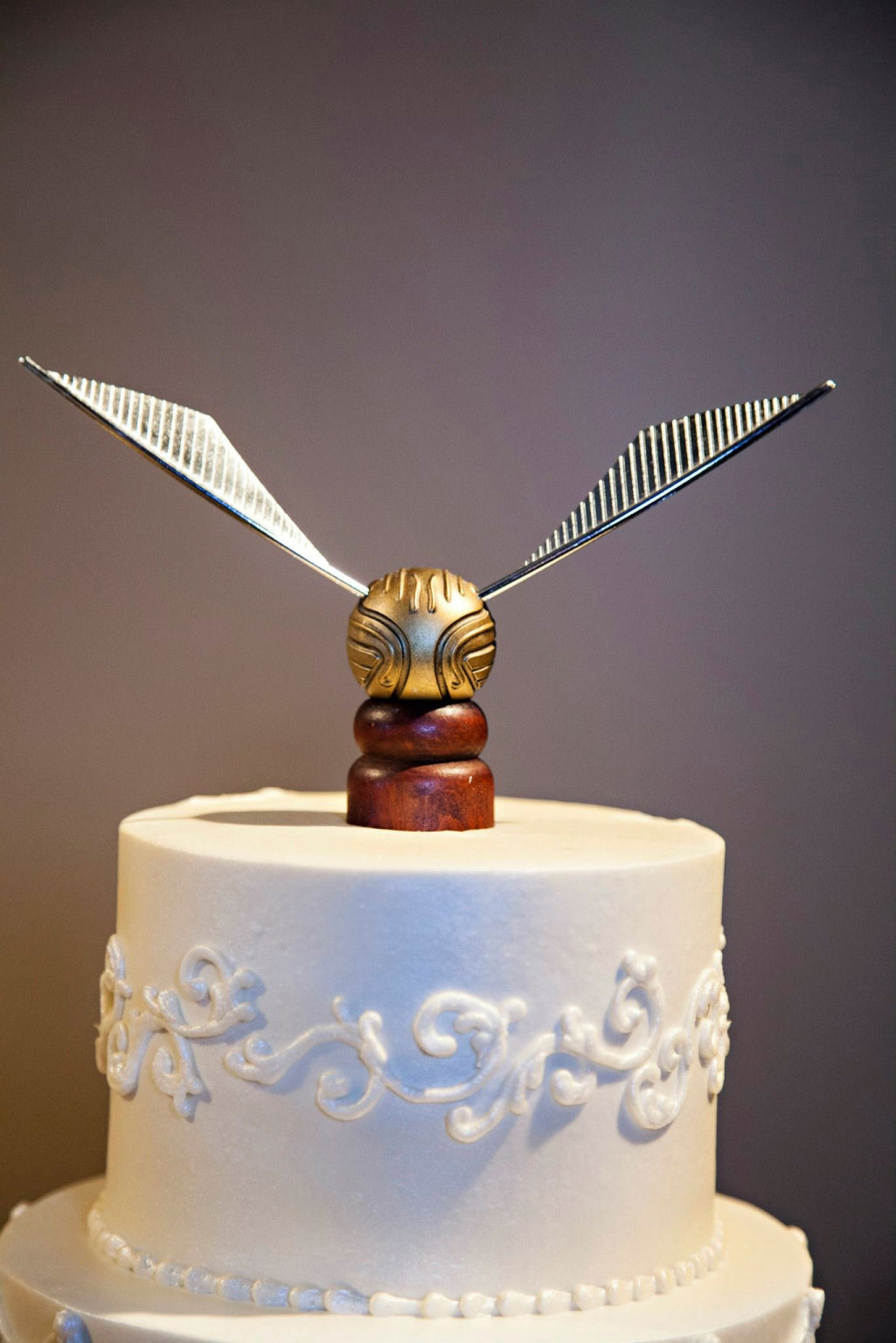 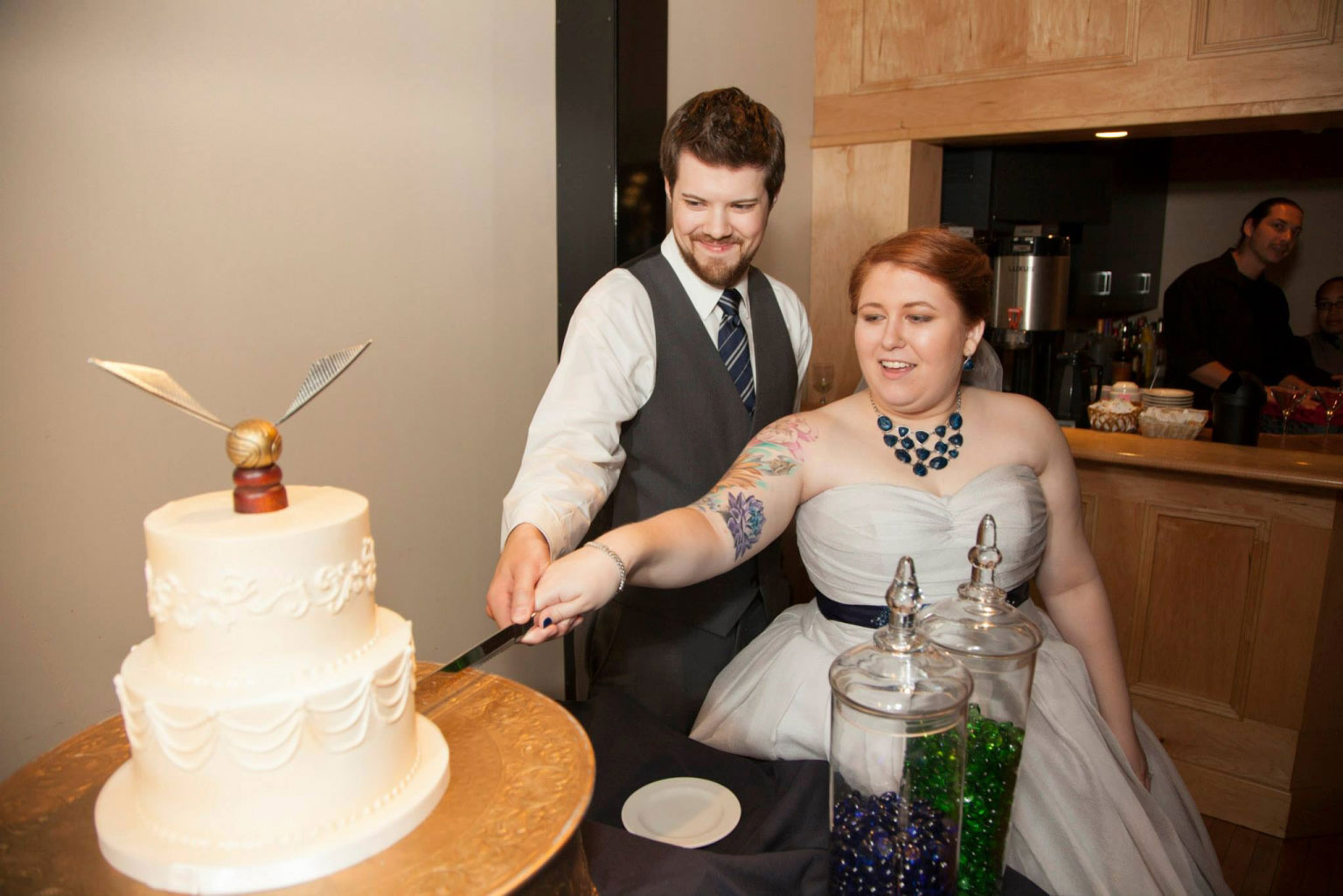 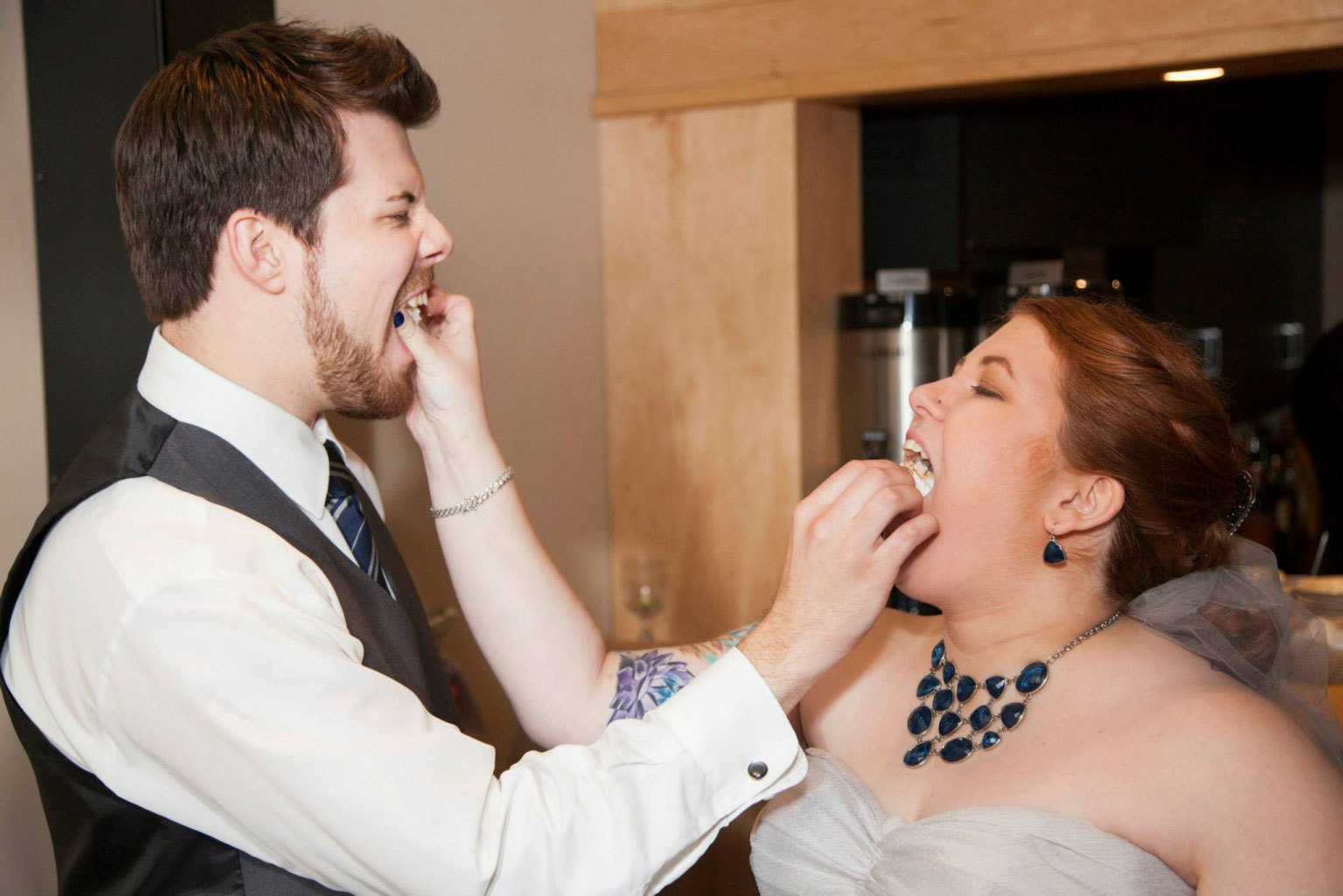 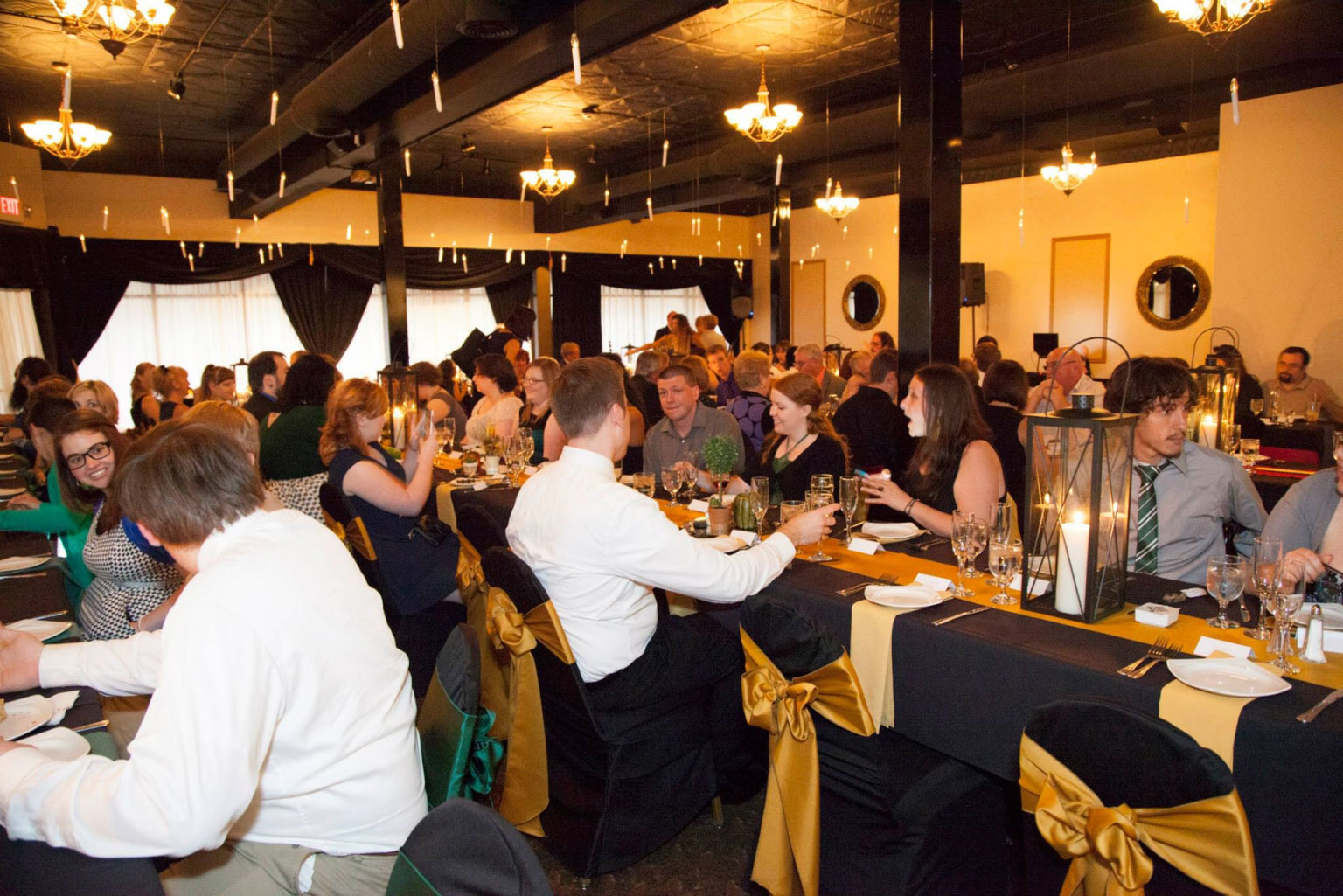 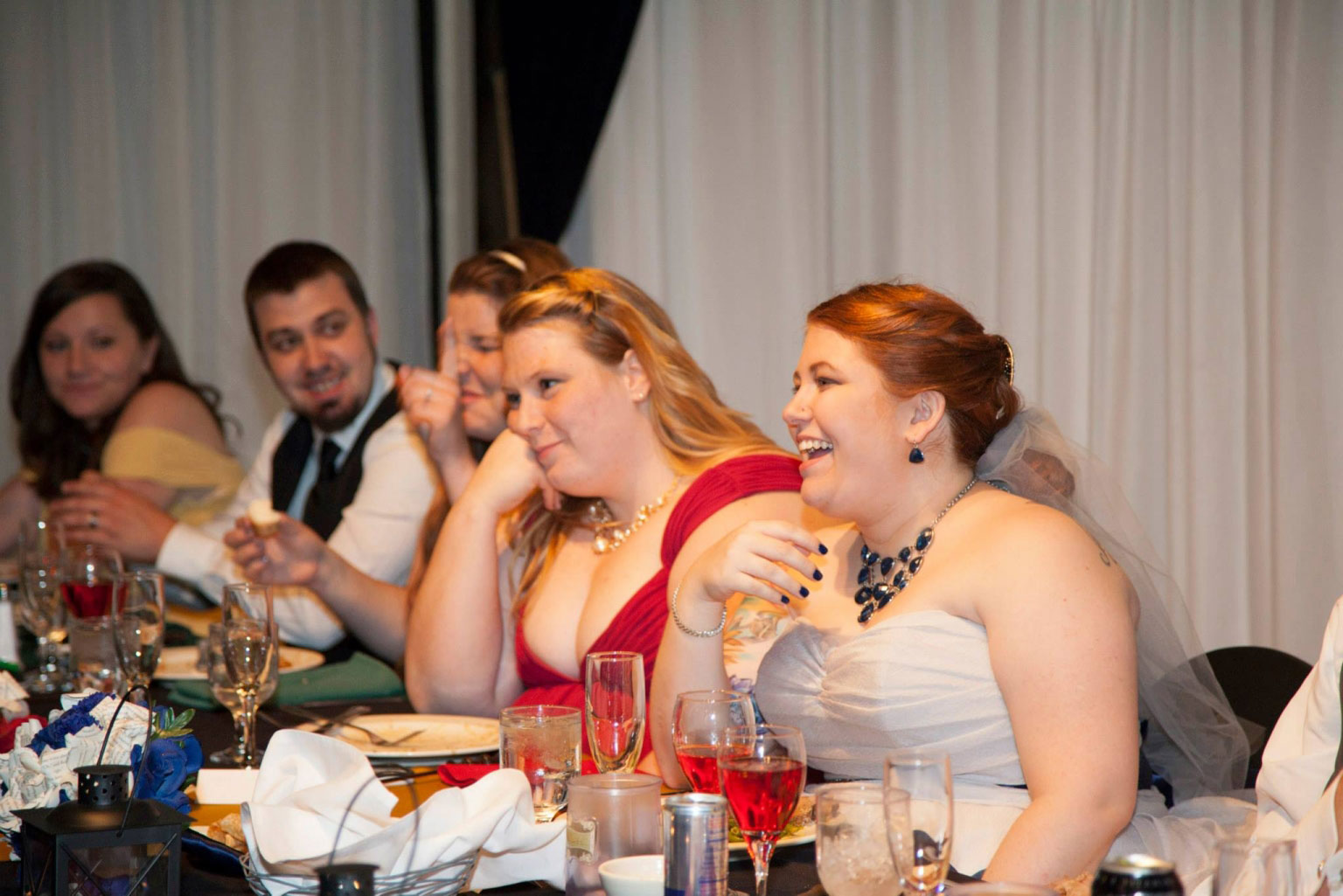