Role Call: The Dark Side Is Calling!

This week, we celebrate an honorary degree winner, learn more about an Imperial Officer, reveal a spy returning to the fold, and listen to a track featuring a certain Hufflepuff who is well known on the convention circuit! All this and more in MuggleNet’s weekly Role Call!

Fans who have attended a convention or two, such as GeekyCon or LeakyCon, have definitely come across this guy. Nick Shirm, who portrayed Hufflepuff Zacharias Smith, is known for more than just his role in Harry Potter. The talented actor also happens to be a member of the band Manifesto and was recently featured on a new track from Goldsmoke. You can listen to the new track, “Cold Call Lover”, via Soundcloud here.

David Tennant (Barty Crouch, Jr.) was recently presented an honorary degree from the Royal Conservatoire of Scotland, and did he ever look smart in his graduation robes! Take a look at some pictures from the event, as well as a video of his acceptance speech. Congratulations, David! 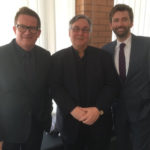 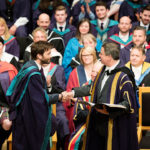 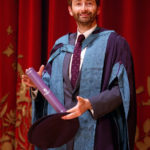 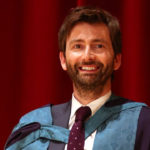 Have you been wondering about the backstory for Domhnall Gleeson‘s (Bill Weasley) General Hux in the new Star Wars: The Force Awakens film? Not much was known about his character until this week, when his first name was finally revealed in the latest addition to the Star Wars novels. Thanks to revelations found in Aftermath: Life Debt, we now know that Domhnall’s villainous character is named Armitage.  According to Digital Spy, some backstory was also brought to light, as readers of the novel found out that General Hux was born out of wedlock to an Imperial Officer and grew up with the notion that he was meant to rule the universe. Hopefully, fans will learn even more about Domhnall’s character next year, as the sequel to The Force Awakens is slated to be released on December 15, 2017.

Harry Potter producer David Barron and director David Yates are making the media rounds this week as the new Legend of Tarzan hits theaters across the country. The pair sat down with HeyUGuys to talk all things jungle, plus a smidge about Fantastic Beasts and Where to Find Them. Take a look!

Potterheads, whether they realize it or not, have already been exposed to the inner workings of how a spy operates. As Harry, Ron, and Hermione set out to bring about the downfall of Voldemort, they used all sorts of spy tricks to gain information and gather intelligence on their targets. Also no stranger to spying, Gary Oldman (Sirius Black) is set to return to his Tinker, Tailor, Soldier, Spy role as superspy George Smiley. The sequel, confirmed by Oldman at a recent event in Las Vegas, is currently being written and is based on the John Le Carré sequel novel called Smiley’s People.

Well, I am back. We are in discussion. There is a script, but I don’t know when we will shoot. I do miss George, but oh, no, to come back is terrifying because it’s got to be better.

Warwick Davis (Professor Filius Flitwick/Griphook) will be on hand this month at the Burghley Film Festival, and he’s taking your questions! The film festival will be showing two of the Harry Potter films to kick off the event, Philosopher’s Stone and Prisoner of Azkaban. Later in the evening, Deathly Hallows – Part 1 and Part 2 will be shown.

I can’t wait to be at Burghley for this terrific day of ‘Harry Potter’ in such a spectacular outdoor setting, and I’m really looking forward to chatting with fans, so come along with plenty of questions.

He will appear on July 27 on a special stage and will be ready to answer your questions. You can submit your questions to jo.tinker@burghley.co.uk and learn more about how you can attend the festival by visiting the website here.

That wraps up this week’s Casting News – don’t forget to check back in with us every week to find out what your favorite Harry Potter actors are up to, and feel free to comment on the latest projects – we love hearing from our readers and seeing what your thoughts are!