In this week’s Casting News, we find a hosting gig for a guy with a big personality, see an Order of the Phoenix member taking a role in the DEA, get a sneak peek at Alfred Enoch‘s day job, and then try to decide: Salt Lake City or India? Answers to that question and much more in MuggleNet’s Role Call!

Love her or hate her, the talented actress who portrayed Dolores Umbridge will soon be singing her way into homes across the world. It was announced this week that Imelda Staunton‘s 2015 London revival of Gypsy, in which she plays Mama Rose, will be included in a number of musicals that will be released on Blu-ray. You can pre-order your copy of Gypsy through Shout! Factory here, prior to the November 1 release. Additionally, Gypsy will also air this fall on PBS as part of the PBS Arts Festival, so check your local PBS station for air dates.

We had previously reported that Domhnall Gleeson (Bill Weasley) had been cast in the new Tom Cruise thriller, Mena. The film has undergone several changes since then, including having its release date moved from January 2017 to September 29, 2017. In addition to the push back of the release, the film has been renamed American Made. Based on a true story, Gleeson will play Monty Schafer, a US Drug Enforcement Agent who is tasked with supplying information to drug smuggler Barry Seal, played by Cruise.

Is anyone else dying to know more about Wes on How to Get Away with Murder? Entertainment Weekly‘s “Spoiler Room” writers must be trained in the art of Legilimency, because they spoke with executive producer Pete Nowalk and then gave us the teeniest, tiniest hint of what is to come next season for Alfred Enoch‘s character, saying,

The instant aftermath is Wes is standing there in his father’s blood. We will answer a very important question right when we pick up in the show, and then we will move past it. I think the question is what happens in the immediate aftermath of Wes telling this man, ‘I think I’m your son,’ and him getting shot while the man is on the phone? It’s basically what will happen to Wes in those instant moments, and there might be some reveal within that.

The Shondaland series is set to return on September 22 to ABC. Until then, let’s take a look at some stills from an Entertainment Weekly photo shoot with the cast, featuring that tall drink of water, Alfie, who portrayed Dean Thomas in the Potter films. He really looks great in a suit, yeah? 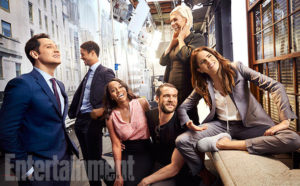 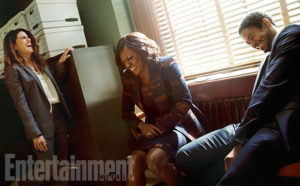 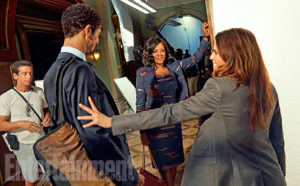 Jason Isaacs (Lucius Malfoy) has joined the film Hotel Mumbai, which is based on the true story of the Pakistani attacks on the Taj Mahal Palace Hotel in India in 2008, as told through the documentary Surviving Mumbai. While his role is not yet known, here is a brief description of the story the film will tell:

For 68 hours, hundreds were held hostage as shots rang out [amidst] a raging fire. More than 160 people died and as in Hotel Rwanda, it was the courageous actions of a few that prevented a much higher death toll in the hotel itself.

The season of the fan convention is far from over, folks! We have news of at least two former Potter stars who will be attending events in the coming months. First, push those “I didn’t get my Hogwarts letter again this year!” blues out of the way, because the wonderfully talented and bubbly Evanna Lynch (Luna Lovegood) will be spending September 2 to 3 at Salt Lake Comic Con! On the complete opposite side of the world, the kind and gorgeous Afshan Azad (Padma Patil) will travel to India to attend the Hyderabad Comic Con on September 24 and 25, and the actress is happy to make this her first trip to India, saying,

I am so excited to visit India and to see all the fans at the Hyderabad Comic Con. I’m sure it’s going to be a great event and I hope to see everyone there soon!

Star Wars fans, let me hear you! You want John Williams back to score the next episode of the film franchise? Consider it done! The award-winning composer is rolling up his sleeves with the intention of getting down to the business of scoring Star Wars: Episode VIII within the next few weeks. The composer told fans during a recent performance at Tanglewood Music Center that he only agreed to come back:

. . . mainly because he was enchanted by actress Daisy Ridley’s portrayal of Rey and does not want another composer scoring her scenes.

Domhnall Gleeson is also set to return as General Hux in the next episode.

Lastly, it’s all fun and games until someone pokes an eye out. We have a feeling Warwick Davis (Fililus Flitwick / Griphook) might be thinking the same thing about his next gig, which was recently revealed to be as the host of Tower of Ten. The show is produced by Initial for ITV Daytime and will feature contestants vying for money if they can successfully name anything that would be on a top 10 list. Here’s a brief description:

Over the course of each game, players step up to take on a top ten question which could be anything from the most populated European capital cities to best-selling Madonna singles or the most common phobias. For every correct answer they find within the top ten, the contestant moves up the money ladder. ‘Tower of Ten’ is played by a team of five people – four team mates and one team captain – who know each other well; be it work colleagues, pub quiz teams, friends or families. The aim is for the team captain to get as many teammates through to the final whilst earning as much money as they can. The more players that get through to the final, the more chance there is of walking away with a potential jackpot of up to £100,000.

‘Tower of Ten’ takes our obsession with top ten lists and turns it into a new highly addictive play-along quiz for the whole family to enjoy. With unique questions, exciting reveals, and the legendary Warwick Davis at the helm, it’s going to be a lot of fun. We are thrilled to be making it for ITV.

That wraps up this week’s Role Call! Which role announced this week is your favorite? Would you rather be composing music with John Williams or helping Warwick Davis manage money-hungry contestants on Tower of Ten? Perhaps you’d rather fly with Afshan to India and get a taste of something exotic? Let us know which role you would tackle by leaving your thoughts in the comment section below!