Role Call: Cormoran Strike Is Back

This has been one busy week! Cormoran Strike got a face, and some of our favorites like Timothy Spall, Imelda Staunton, and Gary Oldman have begun projects bound for the Academy Awards. Not to mention a film student in the UK is raising money to feature Emma Watson in his film for nine seconds. Find out why and what many other Harry Potter alum are up to in this week’s Role Call!

Fans of Robert Galbraith’s (*cough* *cough* J.K. Rowling!) Cormoran Strike series, listen up! Tom Burke has just been cast to star as Cormoran Strike in the upcoming crime-drama TV series on BBC based on the books. The series will consist of a three-parter of The Cuckoo’s Calling, a two-parter of The Silkworm, and another two-parter of Career of Evil, in which each episode will last an hour. The drama will begin shooting this fall in London. Can you picture him playing Strike? As far as Tom Burke goes, you might recognize him from BBC’s War and Peace or The Musketeers, but the role of Cormoran Strike will present him an entirely new opportunity.

I’m overjoyed to be immersing myself in the role of Cormoran Strike, who is as complex as he is larger than life. I know I’m joining an extraordinary team of people on a series that for me is peppered with moments of real emotional depth and meticulously grounded in the page-turning momentum of these novels. Cormoran’s world is rich and raw.

This casting has caused a little controversy as many readers pictured someone entirely different as the main character. Let us know what you think about this casting in the comments below!

As we look forward to the release of Fantastic Beasts and Where to Find Them, Ezra Miller, who will star as Credence in the film, elaborates on how he got the role. In an interview with Pottermore, Miller relays his struggle between wanting to enter the magical Harry Potter universe and playing the Flash, a role he had already signed up for at the point of his audition. He decided he wanted both.

So I’m thinking about the part, I’m dreaming about it, I want it, and I know deep down that I will do anything for it, so I start emailing Warner Bros. and I say, ‘Look at Humphrey Bogart!’

Warner Bros. truly moved mountains when it came to making it work in the end. Now, Ezra Miller cherishes his role in Fantastic Beasts, and I can’t wait to see it play out on the big screen.

Bridget Jones’s Baby is released next weekend on September 16, and we will be able to see, yet again, the brilliant stylings of Emma Thompson (Professor Trelawney). In the movie, she will star as Dr. Rawling, Bridget’s enviable OBGYN. The trailer portrays Thompson as absolute comedy gold, so her role is probably the one I am most looking forward to see on the big screen. Well, that and Patrick Dempsey’s beautiful face, but that’s just a given.

If you have yet to see the trailer for Bridget Jones’s Baby, watch it below and catch the movie in theaters next weekend!

Julie Walters (Molly Weasley) will meet Willy Russell in an upcoming program on BBC Two. On the program, Russell will tell the story on how, after dropping out of school at age 15, he became one of the most successful playwrights in modern British theater history.

In an ‘unforgettable’ reunion, Walters and Russell will rehearse a John McGrath play on the new Everyman Theatre stage, visit the legendary men’s toilet at the Philharmonic Pub, which inspired the play ‘Stags And Hens’, encounter eccentric local residents on the terrace house streets where Ringo Starr grew up – and dissect how the notion of ‘working class’ theatre has fundamentally changed since the heyday of Liverpool’s legendary The Everyman Theatre.

Their meeting is sure to bring about magic and laughter. The program does not have an air date yet, but it will premiere this autumn.

Julie Walters will also star in a four-part series on Channel 4 in which she will travel some of the UK’s most famous coastal railway routes. She will journey through Scottish beaches, Cornish fishing villages, and a variety of other landscapes.

Timothy Spall (Peter Pettigrew) and Imelda Staunton (Dolores Umbridge) have been cast together in an upcoming romantic comedy, Finding Your Feet! In the film, Staunton will star as a woman who, after discovering her husband has been having an affair with her best friend, flees to live with her estranged sister. The storyline regarding Spall’s character is unknown at the moment, but we will know soon as they begin filming next month in Europe.

Timothy Spall will also begin filming The Changeover this week when he arrives in Christchurch on September 13. The film is a supernatural romance thriller set in a post-earthquake Christchurch.

The story centers on a 16-year-old who lives in a low-rent suburb on the edge of earthquake-scarred Christchurch with her mother and four-year-old brother. When an ancient spirit attacks her brother and slowly drains the life out of him, she discovers her true identity and the supernatural ability within her, which she must harness to save her brother’s life.

The Changeover is set for worldwide release in late 2017. It sounds a bit (a lot actually—I am just trying to appear strong) creepy…

A film student in the UK is currently raising money and support to feature Emma Watson (Hermione Granger) in his upcoming short film, which tackles topics like gender equality, Brexit, and clueless youth. His name is Edoardo Galeone, and all he wants is nine seconds of Emma Watson at the end of his film. Check out the video below to get a better feel for the project.

The project is called Looking For E, and the fundraising ends tomorrow, so if you would like to donate anything to this cause, visit his Indiegogo page. If you are unable to give, you can use his hashtag #9SecondsOfEmma on Twitter.

Darkest Hour, the upcoming film starring Gary Oldman (Sirius Black), has just added John Hurt (Ollivander) as Oldman’s co-star. In the film, Oldman will star as Winston Churchill alongside Hurt as former prime minister Neville Chamberlain. The plot of the film is as follows:

Within days of becoming Prime Minister of Great Britain, Winston Churchill must face one of his most turbulent and defining trials: exploring a negotiated peace treaty with Nazi Germany, or standing firm to fight for the ideals, liberty and freedom of a nation. As the unstoppable Nazi forces roll across Western Europe and the threat of invasion is imminent, and with an unprepared public, a skeptical King, and his own party plotting against him, Churchill must withstand his darkest hour, rally a nation, and attempt to change the course of world history.

It has been said that with this film, Gary Oldman is potentially setting up a run at the 2018 Academy Awards, so here’s to wishing him the best in the role! The release date for Darkest Hour was recently announced as November 24, 2017.

In a recent interview with the Irish Examiner, Fiona Shaw (Aunt Petunia) walks around the Ireland town of Cobh, discussing the death of her father and the recent influx of tourism in the area. Along the way, a few photos were snapped of her, which you can check out below. 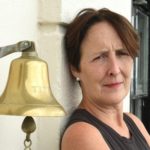 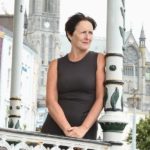 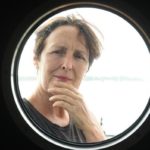 He died five years ago, but he knew everything about Cobh. When he died we had the lunch in The Water’s Edge restaurant here. A huge boat came past when we were sitting down to lunch and everyone just stopped to look at it. Somehow it felt like a last salute to him. You know when you feel that there’s something else present, that you’re experiencing an inanimate visitation? It was strange. My father would have loved it.

While on the tour around the east of Ireland, Fiona stops at The Titanic Experience Museum in Cobh, Kilkenny City, Jerpoint Abbey, Huntington Castle in Carlow, and so many others—each of which seems to hold a special place in her heart. The interview is not lengthy, but Fiona Shaw’s words hold so much meaning.

Writer of Harry Potter and the Cursed Child Jack Thorne will have another production opening in Bristol this February. Junkyard, with a book and lyrics written by Thorne himself, is a comedy musical set in 197os Bristol and follows a rabble-rousing group of teenagers who come together to build an adventure playground. Junkyard will run at Bristol Old Vic, but has two productions in front of it before its premiere in February.

Alfonso Cuarón (director of Harry Potter and the Prisoner of Azkaban) is teaming up with Participant Media to direct a film which chronicles a year in the life of a middle class family in Mexico City in the 1970s.

This film is close to my heart and my first in Mexico since ‘Y Tu Mamá También.’ I am thrilled to be making it with the Participant team.

The project is untitled at this point, but it is sure to be a work of art given his track record.

Shakespeare Live! from The Royal Shakespeare Company will air on PBS on December 23 at 9:00 p.m. ET. The performance will be hosted by David Tennant (Barty Crouch Jr.) and Catherine Tate, screened live from the Royal Shakespeare Theatre in Stratford. The star-studded gala marks 400 years since the death of the Bard and celebrates Shakespeare’s plays.

That’s a wrap on this week’s Casting News! What do YOU think of the Cormoran Strike casting? Who’s rushing to the theater to see Bridget Jones’s Baby? Let us know in the comments below!