In this week’s MuggleNet Casting News, we experience chocolate week with Emma Thompson, fly high with Jack Thorne, and answer trivia questions with Warwick Davis. All that and more in this week’s Role Call!

Last week, Noma Dumezweni (Hermione Granger, Cursed Child) participated in Letters Live, which has been running since 2013. The annual charity event invites well-known faces from within the entertainment and publishing community to publicly read historical letters as a way to raise funds for literacy charities. Toby Jones (voice of Dobby) and Miriam Margolyes  (Professor Pomona Sprout) are scheduled for later dates still to be announced.

Cursed Child playwright Jack Thorne is set to write a spec script for an adventure pic that is based on a real-life event following two hot air balloonists. According to Deadline, the rumored story is focused on a man and woman who fly hot air balloons higher than any other balloonist has. Keep checking back with us to find out more on The Aeronauts as details become available!

As if you needed any other reason to celebrate chocolate, last week was chocolate week. Emma Thompson (Professor Sybill Trelawney) jumped on the event bandwagon and offered one of her recipes to a book titled Sensational Chocolate, per the Manchester Evening News. You can find her recipe for chocolate brownie pudding with salted caramel and toffee pecans here, or you can purchase the book, which will aid the charity Children’s Air Ambulance.

Imelda Staunton (Dolores Umbridge) is set to appear in Follies in 2017 at the National Theatre. Director Rufus Norris said,

Imelda’s performance in ‘Guys and Dolls’ at the NT is the stuff of legend and I am delighted she is to take the lead in ‘Follies’ under the direction of Dominic Cooke.

Bill Nighy (Rufus Scrimgeour) appeared at the London press conference for Their Finest alongside costar Sam Claflin. Here’s a synopsis of the film, based on the book Their Finest Hour and a Half:

The movie tells the story of a British film crew that attempts to boost morale in Britain during the Second World War through making propaganda films.

As he has for the past several years, Warwick Davis (Griphook/Professor Filius Flitwick) is set to join this year’s Christmas panto of Snow White and the Seven Dwarfs in Woking. He had this to say about his involvement this year:

I am very proud of the show that we have created and I am lucky enough to be involved with the script and direction of the show. I can guarantee you and the family will have a great time.

The show will run from December 10 through January 8, with signed and captioned performances on December 27 and 28, respectively.  To book tickets visit www.atgtickets.com/woking or call 08448717645.

Davis is also set to host yet another television program. Tenable, a quiz show that has teams of five contestants attempting to answer “top ten” trivia questions, is set to premiere next month. If the team successfully answers all questions, they win prize money. If not, then they are deemed “untenable.” The show began filming late in September, according to this tweet from the man himself:

In a rare public appearance, Dame Maggie Smith (Professor and Deputy Headmistress Minerva McGonagall) attended the Purbeck Film Festival at the Rex Theatre in Wareham last weekend, followed by a second appearance at the Harry Warren House in Studland. The actress appeared after a screening of her film The Prime of Miss Jean Brodie and took time to answer questions from the audience. Among the many things we learned from this question-and-answer session is that she has not read her own autobiography, she refused to wear a corset for her role as the Dowager Countess in Downton Abbey, and she praised the hard work of her young Harry Potter costars. She also addressed her retirement, saying,

I am just about getting used to it but it’s something that can be distressing. The much-anticipated sequel to the worldwide hit family film finds Paddington happily settled with the Brown family in Windsor Gardens, where he has become a popular member of the community, spreading joy and marmalade wherever he goes. While searching for the perfect present for his beloved Aunt Lucy’s hundredth birthday, Paddington spots a unique pop-up book in Mr. Gruber’s antique shop, and embarks upon a series of odd jobs to buy it. But when the book is stolen, it’s up to Paddington and the Browns to unmask the thief…

According to FanCarpet, Gleeson will portray a safe-cracker named “Knuckles” McGinty, who will aid Paddington in his search for the thief. Heyman also commented on Gleeson’s being added to the cast roster, stating,

I am thrilled to be back in the warm embrace of Paddington Bear, again under the inspired direction of Paul King. And I’m delighted to welcome Hugh and Brendan to our exceptional cast.

Speaking of Julie Walters, the actress was spotted in costume last week, filming in Cornwall. The Royal National Lifeboat Institution (RNLI) outfit she was wearing is apparently for a television series for Channel 4, although details remain a mystery. You can see a few photos taken by St. Ives resident Chris Oats while the crew and Walters completed a training exercise, along with a video. 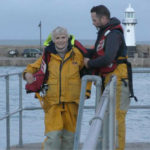 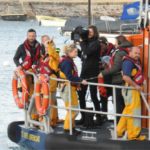 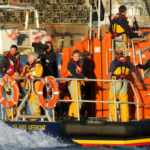 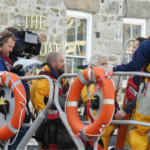 A spokesperson for RNLI confirmed that the filming was for the series, which Walters is set to present next autumn.

We previously reported that Tom Felton (Draco Malfoy) had been present at the London premiere of his film A United Kingdom, but what we didn’t know is that Tom was lobbying for a role on the theatrical stage! During one of his interviews, Tom let it slip that if he were to attend a performance of Harry Potter and the Cursed Child, he’d be likely to jump on stage! Watch the video confession below:

Speaking of Draco, let’s take a look at the creepy new promo for A Cure for Wellness, which his film father, Jason Isaacs (Lucius Malfoy), is starring in.

In A Cure for Wellness, Isaacs portrays the facility director of a wellness spa in the Swiss Alps. His role in this thriller is still unknown, but with his ability to portray the villain, we can only assume it won’t be good! The film is set to debut in February 2017. You can also check out the film’s official website here. Hope you’re ready for your “treatment”!

That’s all for this week’s Role Call! Join us next week as we explore the new roles and projects announced by our favorite cast and crew from Harry Potter and Fantastic Beasts and Where to Find Them!