Our Potter stars have previously donated items, including shoes and jeans, to auctions raising money for good causes. So it’s no surprise that many of our stars have donated sunglasses to another celebrity charity auction, called Specs Appeal. The auction is being run by Sightsavers, a charity that helps prevent sight loss and helps improve the lives of those who have lost their sight.

We want avoidable blindness to be eliminated. We want equality for people with disabilities.

You can find out more about the appeal in the video below.

Money raised from the auction will allow Sightsavers to

continue […] work in places like Uganda, where your donations have helped saved the sight of many young children, including six-year-old Criscent.

Emma Watson has donated a pair of Miu Miu Noir sunglasses, and Daniel Radcliffe a pair of Moscot Lemtosh monochrome sunglasses. The sunglasses come with a signed message and photo. Other Potter stars who have donated sunglasses include Stephen Fry (UK audiobooks), Zoë Wanamaker (Madam Hooch), Dawn French (The Fat Lady – Prisoner of Azkaban), and Robbie Coltrane (Hagrid). You can see a selection of the glasses in the gallery below. 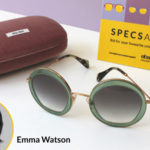 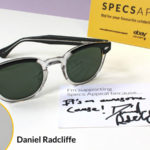 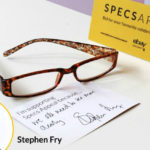 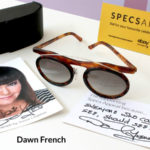 The auction runs until Monday, December 5, when it ends at 3 p.m. ET. More details about the auction are available here. If you’re interested in owning a pair of sunglasses previously owned by one of the Potter stars, then make sure to get your bid in now before it’s too late and you miss out. Not only could you own a piece of unique memorabilia, but you would also be supporting a great cause.

While the prices for Emma and Daniel’s glasses are already considerably higher than some of the others, it’s worth keeping an eye on the bids and getting yours in – even if you can’t stretch to Emma or Daniel’s glasses, you might end up with a pair of glasses once owned by Hagrid or Madam Hooch!