We only found out recently who would be portraying Cormoran Strike and Robin Ellacott in the TV adaptation of Robert Galbraith’s Cormoran Strike crime novels (Tom Burke and Holliday Grainger, respectively), but filming is already well underway. The first read-through for the series took place earlier this month, as documented by Robert Galbraith (a.k.a. J.K. Rowling).

Today, we’ve got our first look at Holliday Grainger and Tom Burke in character as Strike and Robin. Check out the images below! 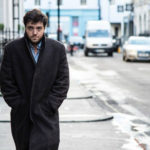 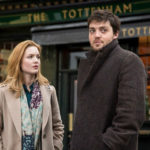 As you can see, the detecting duo is shown outside Strike’s favorite pub, the Tottenham, and we can’t wait to see more images of the duo – as well as, hopefully, a trailer!

Filming is currently underway and will continue until April 2017. Produced by Bronte Film and Television, the series will be shown on BBC1 in the UK and HBO in the US, and as previously reported, the series will have seven 60-minute episodes. No release date has yet been announced.

What do you think of the initial images? Are you excited to see the Cormoran Strike novels come to life on TV?