We’re really excited to offer MuggleNet readers our first giveaway of 2017! A new year means a plethora of new opportunities, adventures, friends, and memories. To help you make some spectacular memories in 2017, MuggleNet has partnered with BoxLunch to bring you a pretty awesome prize.

Thanks to the designers over at BoxLunch, you can now travel the world with your very own Harry Potter trunk-inspired luggage! Check out some great photos of the luggage and get all the details below: 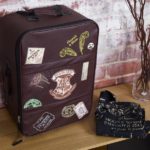 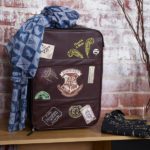 Not only are we offering you a chance at winning this great piece of luggage if you live in the US or Canada, but we also have a few other surprises! If you’d rather not take a shot at walking away empty-handed, BoxLunch is offering a special discount to MuggleNet readers worldwide if they want to purchase the luggage or other Potter-inspired items on the site.  Check out the savings below. good through the month of January 2017!

$10 off $40, CODE: MUGGLE10 – Valid only at boxlunch.com through 1/31/2017. Not combinable or stackable with other promotions. Promotional price will reflect in shopping cart. Not valid towards prior purchases, gift card purchases, taxes, shipping, donations, Harry Potter Noble Collection, Exclusive Overwatch Reaper Pop! or select styles. Associates of Hot Topic, Inc., BoxLunch and its affiliates are ineligible. BoxLunch reserves the right to end or modify this promo at any time.

In addition, purchasing items on the site does some good for those in need. Since opening its first store in October 2015, BoxLunch has been partnered with Feeding America and has donated more than three million meals! For every $10 you spend at BoxLunch, a meal is donated to help feed those who are hungry. You can learn more about BoxLunch’s partnership with Feeding America here.

Now that you know all the details, what are you waiting for? Enter our giveway now for a chance to win this awesome luggage from BoxLunch, and then head on over to their site to check out all the cool Potter-inspired merch available! Don’t forget, any purchase of $10 helps to feed someone in need. Sounds like we’re starting 2017 off just right!