Daniel Radcliffe on Returning to the Stage and “Cursed Child”

Daniel Radcliffe is returning to the West End once again, following his success in previous plays, including Equus and The Cripple of Inishmaan.

Daniel is currently in rehearsals for Rosencrantz and Guildenstern Are Dead (by Tom Stoppard), in which he is starring alongside his friend, and previous co-star, Joshua McGuire. Joshua has also appeared alongside previous Potter alumni in films such as Mr Turner, About Time, and Cinderella and so is sure to be a surprisingly familiar face to Potter fans. In an interview with Digital Spy, Daniel spoke about the challenges of taking on the play and how he felt the first day of rehearsals.

Just very excited and a little intimidated. The size of the thing you’re taking on. It’s a lot to learn; it’s a challenging show but incredibly fun and rewarding to do.

Daniel worked alongside Joshua before in 2012 and spoke about working with Joshua again.

We’ve worked together a few years ago and have kept in contact – and our careers have these sort of weird parallel paths. We worked together on Young Doctor’s Notebook and also playing interchangeable versions of each other. On Young Doctor’s Notebook, he was an even younger doctor. Then on Privacy, we played essentially the same character; Josh did it off Broadway. Then in this play, we’re slightly interchangeable as well. It’s a cool, odd kismet.

Being friends already greatly helped the pair going into rehearsals.

Imagine if you didn’t like them. It would also be a very different play. That would come out. You could play these characters as not liking each other, probably. Or you could play them where they frustrate each other, but essentially, they’re friends.

In the pictures below, you can see Daniel and Joshua in rehearsals. 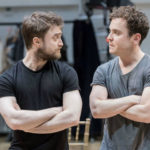 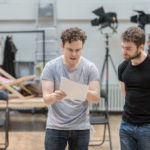 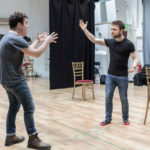 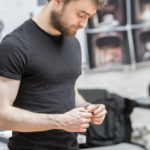 And finally, what about that other unmissable West End play? Has Daniel seen it yet?

I’m not trying to stay away from the show. I’m trying to stay away from what could potentially be the experience of seeing it. I know other people from the cast have gone to see it; I just feel like if I [were] sitting in an audience of Harry Potter fans, it would […] possibly be a slightly different show, and it would possibly be that I would be watching it as much [as] feeling people watching me watch it. This could all be in my head, but I just envisage it possibly not being relaxing.

You can catch Daniel in Rosencrantz and Guildenstern Are Dead at the Old Vic in London from March 7 until April 29. Previews begin on February 25. Tickets are available here. Are you going to see the play? Let us know in the comments.