Have you ever wondered about the stories behind the four different illustrators of the UK editions of Harry Potter?

Thomas Taylor did the very first illustration for Harry Potter at a time when Bloomsbury was taking a chance on an unknown author. Just as it was J.K. Rowling’s first book, it was Taylor’s first commission. Fresh from art school, he dropped off his portfolio with Bloomsbury; the upshot was landing a career-making project. 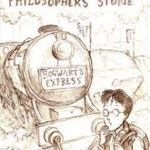 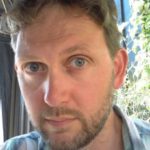 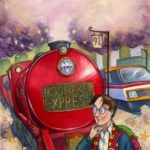 At the time, he was ecstatic:

My first illustration job – Yay! I no doubt bought some new pens to celebrate, and a bottle of Belgian beer. There was an incomplete manuscript to read, roughs to do, and then the painting. The final image — a faint pencil sketch, painted with concentrated watercolour (Doc Martins, I think) and then outlined with a black Karisma pencil — took two days, and all things considered I was quite pleased with it. I think I delivered it by hand.

Now, he isn’t as happy that his very first work is also his most well known:

back then [my style] had only seat-of-the-pants consistency, and my samples were all over the place in terms of age-range.

Although he professes to have only read the first three books, it appears he can’t get away from the association. One of his newer illustrations, drawn in 2012, is for a book called Dan and the Dead… you can draw your own conclusions about its similarity to Harry Potter. Taylor’s biggest regret from the experience is that he never bought one of the first editions sitting in his shop – now worth thousands of dollars.

As for who that wizard might be on the back cover, Taylor revealed that he was commissioned to draw “a wizard to decorate the back cover,” and so he created a generic wizard (based on the likeness of his father) that “disappeared in a puff of smoke” to make way for Dumbledore when the publishers kept being asked to explain who the wizard was.

There were rumors that the wizard’s name was “Wizzy” when it was revealed in the filename, but Taylor dispelled this, stating a filename is all it ever was.

Once Harry gained popularity, the publishers chose to employ a more experienced illustrator for the next two books: His name was Cliff Wright.

What do you think of Thomas Taylor’s interpretation?