It’s an All-New Cast for “Harry Potter and the Cursed Child”!

As the current Cursed Child cast begin the slow descent towards the end of their run in the award-winning play, new cast members were announced along with rehearsal and debut details.

This week, an entire new principal cast started their Potter journey with rehearsals in anticipation of their May 24 debut on the West End. The change in actors isn’t entirely unexpected, as we previously reported that actor Anthony Boyle was rumored to be leaving his role as Scorpius Malfoy. Director Jack Thorne spoke with Pottermore about the changes.

Think of Doctor Who: new generations happen all the time. People like seeing new actors and their different approaches to characters. We like to see different actors and actresses playing Hamlet, for example — or Lady Macbeth or James Bond.

While some original background cast members will remain, all of the key roles have been recast. Take a look!

Harry Potter will be portrayed by Jamie Glover, with Emma Lowndes taking on the role of his wife, Ginny. Rakie Ayola will take on Hermione Granger while Thomas Aldridge rounds out the casting of the trio as Ron Weasley. James Howard will tackle Draco Malfoy, and already has experience with Cursed Child, having been a part of its original cast.

Theo Ancient will appear in his first professional stage role as Albus Potter along with Samuel Blenkin as Scorpius Malfoy. Rose Granger-Weasley will be played by Helen Aluko, who is an original actor from the Cursed Child theatre company. You can see photos of the principal cast below as well as the full company that will debut on May 24. 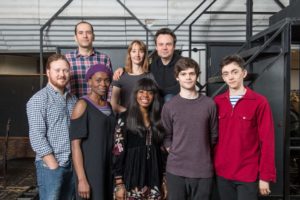 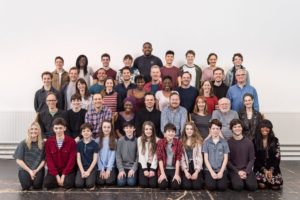 Producer Sonia Friedman also spoke about the new cast and what types of performances to expect.

They’re not emulating anybody else. Great plays, great work, will always be reinterpreted by great actors. We’re really looking forward to seeing what they bring to the parts.

For more on the new cast, check out the play’s cast announcement and the press release below!

Rehearsals began this week for the new West End cast of Harry Potter and the Cursed Child who will start their performances at the Palace Theatre in London’s West End on 24 May 2017 following the final performance from the current cast on 21 May 2017. Jamie Glover will play Harry Potter with Emma Lowndes as his wife Ginny Potter and Theo Ancient as their son Albus Potter. Thomas Aldridge will play Ron Weasley with Rakie Ayola as Hermione Granger and Helen Aluko as their daughter Rose Granger-Weasley. Playing Draco Malfoy will be James Howard with Samuel Blenkin as his son Scorpius Malfoy.

Harry Potter and the Cursed Child is the eighth story in the Harry Potter series and the first official Harry Potter story to be presented on stage. The critically acclaimed production received its world premiere in June 2016 at the Palace Theatre and is now the recipient of thirteen theatre awards including the Evening Standard Best Play Award. Earlier this month it was announced that Harry Potter and the Cursed Child was nominated for a record-breaking eleven Olivier awards, making it the most nominated new play in Olivier history.

Harry Potter and the Cursed Child is currently booking to 29 April 2018. The next advance ticket release will take place on 25 April 2017. Tickets are priced from £15 per part and for every performance there are over 300 tickets at £20 or less per part. Further ticket releases will be announced throughout the year, details of which will published via the official Harry Potter and the Cursed Child website, social media channels and the official newsletter.

It was always difficult being Harry Potter and it isn’t much easier now that he is an overworked employee of the Ministry of Magic, a husband and father of three school-age children. While Harry grapples with a past that refuses to stay where it belongs, his youngest son Albus must struggle with the weight of a family legacy he never wanted. As past and present fuse ominously, both father and son learn the uncomfortable truth: sometimes, darkness comes from unexpected places.

Jamie Glover (Harry Potter) was last on stage in What’s in a Name? for Birmingham Repertory Theatre. His other theatre credits include The Rehearsal, An Ideal Husband and If Only all for Chichester Festival Theatre, Donkeys’ Years at the Rose Theatre Kingston, Noises Off at the Old Vic and Novello Theatre in the West End, The Chalk Garden for the Donmar Warehouse, The Shawl and The Man Who Had All the Luck both for Sheffield Crucible, The Novice for the Almeida Theatre and The Invention of Love for the Theatre Royal Haymarket.  For the Royal Shakespeare Company his credits include All’s Well That Ends Well, The Roman Actor and Edward III.  On film his credits include These Foolish Things, Sacred Life and Age of Treason.  He is best known on television for playing Andrew Treneman in Waterloo Road and James Lacey in Agatha Raisin, and has also been seen in Endeavour and Doctor Who: An Adventure in Space and Time.

Emma Lowndes’ (Ginny Potter) many television credits include Bella Gregson in Cranford, Mary Rivers in Jane Eyre and Margie Drewe in Downton Abbey. She can soon be seen as Carla Davis in Channel 4’s The Trial. Her theatre credits include The Herbal Bed at the Royal and Derngate Theatre Northampton, Children of the Sun and Thérèse Raquin for the National Theatre, The Accrington Pals, Port, The Rise and Fall of Little Voice and The Seagull for the Royal Exchange Theatre and Whose Life is it Anyway? at the Comedy Theatre.  On film her credits include Mother’s Milk and All or Nothing.

Theo Ancient (Albus Potter) trained at RADA and will make his professional stage debut in Harry Potter and the Cursed Child.

Thomas Aldridge (Ron Weasley) is currently appearing in Les Misérables at the Queen’s Theatre.  His previous theatre credits include The Lion, The Witch and The Wardrobe for Birmingham Rep, Made in Dagenham at the Adelphi Theatre, A Midsummer Night’s Dream and The Taming of the Shrew for the Open Air Theatre Regent’s Park, The Secret Garden and Peter Pan – A Musical Adventure for West Yorkshire Playhouse and Birmingham Rep, His Dark Materials on UK tour, Only the Brave for Soho Theatre, and High Society at the Shaftesbury Theatre.  His television credits include Undercover, Titanic, Call the Midwife, Silent Witness, Hope and Glory and The Support Group.  His film credits include Flea and Blasted.

Rakie Ayola (Hermione Granger) was last on stage in The Rest of Your Life at the Bush Theatre.  Her previous theatre credits include King Lear at the Royal Exchange Theatre where she played Goneril, Crave/4.48 Psychosis for Sheffield Crucible, The Curious Incident of the Dog in the Night-Time at the Apollo Theatre, Dido Queen of Carthage for the Globe Theatre, The Winter’s Tale for the Royal Shakespeare Company and Welcome to Thebes for the National Theatre.  Her television credits include No Offence, Vera, Under Milk Wood, Black Mirror, Doctor Who, Silent Witness and Holby City.  Her film credits include Been So Long, Dredd, Now is Good and Sahara.

Helen Aluko (Rose Granger-Weasley) is an original member of the Harry Potter and the Cursed Child company.  Her previous theatre credits include Doctor Faustus for the Royal Exchange Theatre, Once Language, Many Voices for TNT, The Price for Walking Forward, The Wind in the Willows for Sixteen Feet Productions and Beauty and the Beast at Theatre Royal Stratford East.  Her television credits include The Driver.

James Howard (Draco Malfoy) is an original member of the Harry Potter and the Cursed Child company.  His previous theatre credits include Brave New World for Northampton Theatre Royal, Romeo and Juliet, As You Like It, Mojo, King Lear and Morte D’Arthur for the Royal Shakespeare Company, Twelfth Night and Ivanov for Donmar Warehouse and The Duchess of Malfi for the National Theatre.  His television credits include Black Mirror, Dark Matters, Skins, Spooks, Inspector Lynley Mysteries and Dream Team.  On film his credits include Survivor, The Theory of Everything, The Oxford Murders and Penelope.

Samuel Blenkin (Scorpius Malfoy) trained at the Guildhall School of Music and Drama and also makes his professional stage debut in Harry Potter and the Cursed Child.

Every Friday, The Friday Forty takes place at 1pm when 40 tickets are released for every performance the following week for some of the very best seats in the theatre.  Subsequent ticket releases take place each Friday for performances the following week.  Priced at £40 (£20 per part) tickets will secure a seat for both Part One and Part Two on consecutive performances.  Customers will be selected at random for the opportunity to buy tickets online and will be able to purchase a maximum of two tickets for both Part One and Part Two in one transaction.  To ensure that as many people as possible have the chance to access these tickets, they will only be available to buy online www.harrypottertheplay.com/ticket-information

Returned and other late-release tickets may also become available at short notice. These are not guaranteed, but any tickets that do become available will be sold on a first-come-first-served basis, online or in person at the Palace Theatre box office at full price.

A new batch of tickets to see the play will be up for purchase starting April 25 and the results of Cursed Child’s 11 Olivier Award nominations will be announced on April 9.

What do you think of the new cast? If you’ve already seen the play, are you excited to see a new take on the characters after experiencing the original cast?