Welcome to Role Call: MuggleNet’s weekly casting news column where we discuss what our favorite Harry Potter actors are up to since leaving the wizarding world. Read on to learn more about David Tennant’s newest Disney endeavor, Sir Kenneth Branagh’s newest accomplishment, and Stephen Fry’s newest audiobook secret reveal! Oh, and you’ll also fall in love with Dame Maggie Smith all over again. All that and more in this week’s Role Call!

David Tennant (Barty Crouch Jr.) will take over Disney XD as Scrooge McDuck in the brand new cartoon series DuckTales! Much like the original ’80s cartoon, this new revival is packed full of adventure, family, and downright hilarity! The first season of the show, which lands on Disney XD this summer, is composed of 21 half-hour episodes and two hour-long specials…and guess what?! It has already been picked up for a second season! This upcoming animated show will focus on Tennant’s gold coin–diving millionaire Scrooge McDuck, his nephew Donald (hmmm, sounds familiar), and three grand-nephews: Huey, Dewey, and Louie. The family will also be joined by Mrs. Beackley and her granddaughter, Webbigail Vanderquack, as well as Scrooge’s personal pilot, Launchpad McQuack. Watch the action-packed, silly trailer for DuckTales below! Have a good time trying to get this song out of your head for the rest of the day.

David Tennant’s Broadchurch will continue in Australia tonight at 8:30 on ABC! The episode will follow Ellie and Hardy and the rest of the Broadchurch CID in an incredibly difficult investigation! Tune in tonight!

Even though Hurt has passed away, this new audio drama is not the last we will hear of him. Starring as a terminally ill screenwriter, he can be seen in his last role in the upcoming film That Good Night.

Sir Kenneth Branagh (Gilderoy Lockhart) will receive the Special Award at the Olivier Awards 2017 on April 9! Branagh was first awarded Best Newcomer at the Olivier Awards, but this newest honor will be in recognition of his outstanding contribution to British theater. Since his first award in 1982, Branagh’s career has spanned from television to stage and film, earning him award after award along the way. You can learn more about what earned Branagh this particular award at the Official London Theatre. Tune in live on March 6, when the nominations will be live-streamed. Congratulations to Kenneth Branagh!

Channel 4’s Catastrophe is back in full swing, but this week’s guest star has us all in a tizzy! The show’s lead actor took to Twitter last week to announce his excitement and disbelief.

Thanks for watching the new episode of Catastrophe. Domhnall Gleeson joins the show next week if you can't believe that. I can't.

That’s right! Domhnall Gleeson! Our very own Bill Weasley has gone on to act in some blockbuster films since Potter but has also dabbled in a bit of television! This week, Gleeson will be playing a recruitment consultant, undoubtedly tasked in helping Rob Delaney’s character find a new job. Catch Domhnall Gleeson in Catastrophe on Channel 4 Tuesday night! Here is a sneak peak of his new character! 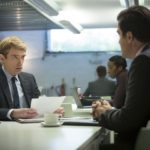 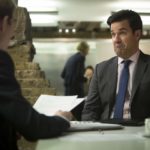 Jason Isaacs (Lucius Malfoy) has joined forces with the Marie Curie charity to help launch its annual Great Daffodil Appeal. To celebrate the charity’s biggest fundraising campaign, Isaacs met with a couple of nurses to try to raise money to help people and families nearing the end of their lives.

Inspiring day with these 2 angels from @mariecurieuk to help launch the Great Daffodil Appeal https://t.co/y5cRIYYpms pic.twitter.com/teArtI5v0S

A new clip for Sir Michael Gambon‘s (Albus Dumbledore) newest film, Viceroy’s House, was released on Monday, in which we saw Gambon star as one of the key servants. His voice is so iconic. I closed my eyes and saw Dumbledore immediately. That being said, Viceroy’s House is one of those films that you absolutely must see, especially this year:

The film’s story unfolds within that great House. Upstairs lived Mountbatten together with his wife and daughter; downstairs lived their 500 Hindu, Muslim and Sikh servants. As the political elite – Nehru, Jinnah and Gandhi – converged on the House to wrangle over the birth of independent India, conflict erupted. A decision was taken to divide the country and create a new Muslim homeland: Pakistan. It was a decision whose consequences reverberate to this day.

The film is told through the lens of love and marriage between people of many faiths and backgrounds, celebrating tolerance. The film was released in the UK on March 3, coinciding with the 70th anniversary of the independence of India and the founding of Pakistan, an important event in the movie. Watch the newest clip below, and if any of you lucky ducks in the UK have seen it already, let us know in the comments how it was!

Michael Gambon also visited Shears Green Junior School in Northfleet on World Book Day, when thousands of children across the country visited in their favorite Harry Potter attire. Gambon answered questions in true panel fashion, posed for photos with the kids, signed autographs, and even allowed a few interviews! 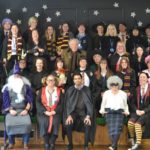 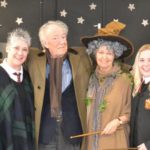 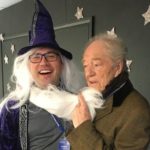 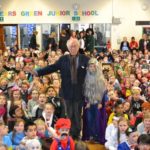 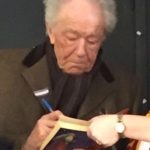 This event was made even more special because it was a totally adorable surprise to the kids, who were probably just excited to dress like Harry Potter. Their expectations were blown out of the water! The deputy head of the school was just as excited as the children:

Everyone is still buzzing. He popped in yesterday morning and spoke to the adults first, and we gave him a tour… He was such a nice guy, nothing was too much for him. He was so down to earth and laughed and joked. He referred to himself as Dumble’bore’ saying he wasn’t very interesting.

What a truly amazing experience for those kids!

Want to see Helena Bonham Carter (Bellatrix Lestrange) in a truly brilliant getup? Hold your horses (pun intended)! This past Thursday night, Bonham Carter attended Save The Children’s “A Night Of Country” event in London, fully embracing her cowgirl style, complete with a holster and imitation gun. It is safe to say that Helena Bonham Carter was the cowgirl of the evening.

Will Bill Nighy have a part in the upcoming Love Actually sequel, Red Nose Actually? Emma Freud, director of Red Nose Day, has been teasing fans all week with little hints about the sequel. So, will Nighy return? You be the judge.

'I've had some work done but it seems to have worn off'. #14yearslater #rednosedayactually #guesswho

Robbie Coltrane (Rubeus Hagrid) and Julie Walters‘ (Molly Weasley) newest television collaboration is now available to stream on Hulu! National Treasure, a four-part drama, has been in the works for ages! We are so excited to see the project come to fruition and to see this duo work together to tell this powerful story.

‘National Treasure’ follows Paul Finchley, an ageing, beloved comedian, a hero to TV audiences and peers alike, after he is arrested following an allegation of rape dating back to the 90s. The four-part drama follows the story from arrest through to verdict and focuses both on the investigation, and the effect of the case on Paul and his family; his wife of 40 years, Marie, and his troubled daughter, Dee. ‘National Treasure’ is a story that goes behind the headlines to look at the human and emotional impact when a whole life is called into question. It explores memory, truth, age, doubt, and how well we really know ourselves and those close to us.

Stream National Treasure on Hulu now by clicking the image below!

Stephen Fry (voice of UK audiobooks) released a very exciting bit of news this past week! Those of you who are Sherlock Holmes fans, GET READY! Fry, a lifelong fan of Doyle’s series, will narrate the complete works of Sherlock Holmes for Audible.com – 56 stories in all! What can possibly be better than that? See him finally share his secret project below!

Stephen Fry has returned to Bones as Dr. Gordon Gordon Wyatt! His return is long overdue!

Bones is on Tuesdays at 8:00 p.m. on Fox! Check out the clip below for a sneak peek of last week’s episode.

Fiona Shaw (Petunia Dursley) will direct a new adaptation of Medea, which will highlight the Wexford Festival Opera’s program this year. Shaw previously played the lead of Medea, even earning a Tony Award nomination for her performance. The festival will last 18 days, starting on October 19. We can’t wait to see what Fiona Shaw does with this production!

In a recent interview with the Guardian, Dame Maggie Smith (Minerva McGonagall) and her friend and costar Judi Dench both agree that if they were to have started their acting career in today’s entertainment industry, they would not have been as successful as they have been.

I think they are so brave, the young actresses of today. They seem to have to strip off every second. I can’t imagine how they cope with it today, I really don’t. They are required to do the most extraordinary things.

I can’t imagine Maggie Smith not being a successful, formidable icon in the industry, but she admits that her on-set reputation is largely due to fear and her persistent nerves. Bless her.

The awful thing is, I’m very aware when I’m being difficult, but I’m usually so scared. And that’s shaming, at the age one is because every time I start anything, I think, ‘This time I’m going to be like Jude [Dench], and it will all be lovely, it will be merry and bright, the Quaker will come out in me.’ But it never works. Jude has a wonderful calm, it’s very enviable. I think it would be hairy if she let fly, but I’ve never seen that.

Taking this into account, Smith says that if she changes things up a bit, being nicer and jubilant on set, that she would only frighten her coworkers, and they would wonder what she was up to.

But perhaps I should try it … ‘Hello! What fun! We’re going to be here all day! And then filming all night too! Goodie! And it’s so lovely and cold!’

Maggie Smith is a true twinkle in one’s eye, a one-of-a-kind soul, and an absolute legend. You can read the full interview with the Guardian here.

The Sense of an Ending, Jim Broadbent‘s upcoming film, will come to the big screen on March 10, but until then, we’ve been teased with several new photos from the film. 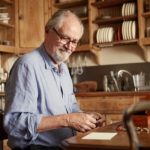 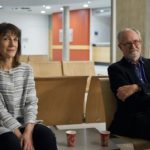 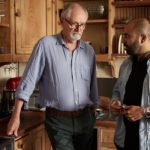 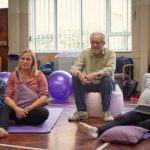 The film follows main character Tony Webster, played by Broadbent, as he searches for closure as bits of his past come back to haunt him. The Sense of an Ending will be released in limited theaters, but you can watch the trailer below!

Game of Thrones fans UNITE! In a recent interview with ScreenCrush, Jim Broadbent divulged lots of information on his upcoming Game of Thrones character!

I’m a maester, an archmaester. I’m an old professor character… I did five episodes. I did sort of one major scene in each episode.

Broadbent also noted that he shares scenes with Sam Tarly, played by actor John Bradley. With the release of this information, we can all just assume that he will be playing Maester Marwyn who, after years of traveling across the Seven Kingdoms, is now on the search for Daenerys. Keep an eye out for more information on his character! We will let you know when the episodes are supposed to air.

Catch Little Big Shots, one of ITV’s newest shows, with host Dawn French (the Fat Lady) on Wednesdays at 8:00 p.m. The popular show started on March 1 and follows some of the most talented, hilarious children of all time, from pianists and dancers to football fanatics. Dawn French is truly a gift to humankind in this latest program.

And that’s a wrap on this week’s jam-packed Role Call! There is some really good stuff brewing, and I personally can’t wait to see it all come to fruition! What was your favorite part?