In this week’s Casting News, we learn more about those silly Downton rumors, bite our nails in terror at a haunting film starring a fan favorite, and get teased by a MuggleNet Live! 2017: Nineteen Years Later guest about a new project! Check out this week’s Role Call!

Cherrelle Skeete (Rose Granger-Weasley), one of the darlings of Harry Potter and the Cursed Child, has joined an adaptation of The Seagull. Announced via Twitter, Cherrelle is set to portray Masha, starting October 10 through November 4 at the Lyric Hammersmith. Not much is known about her character at this time, as this is an adaptation of the play. In the original, Masha is a dark and depressed character.

Here’s a brief synopsis of the play:

On a summer’s day in a makeshift theatre by a lake, a bold new play is to be performed. It is the work of a young, would-be playwright, Konstantin, who is searching for a new, more authentic dramatic form. The play stars his beautiful muse and neighbour, Nina. The assembled family audience includes his actress mother, Arkadina, who has just arrived from Moscow with the famous novelist, Trigorin. What happens during, and in the days immediately after, this play’s first performance will change not just the course of the summer, but the lives of everyone involved, for ever after.

Fantastic Beasts stars Colin Farrell (Percival Graves/Grindelwald) and Carmen Ejogo (Seraphina Picquery) are starring in the new thriller Roman Israel, Esq. alongside Denzel Washington. Not much is known about Ejogo’s character, except that she has been hired as the female lead in the film and will play a civil rights worker. No word on who Farrell will play in the film either, but given the premise, he will probably be an evil lawyer of some sort. Principal photography has wrapped on the film, but no release date has been announced. The film was previously titled Inner City but recently underwent a title change. Here’s the plot of the film:

An idealistic defense attorney with strong morals, who is dedicated to helping those who are socially oppressed. He’s offered a job at a prestigious law firm after the death of his longtime partner, but he then takes on a case that has life-altering repercussions.

Ejogo can also be seen next in the Starz returning series The Girlfriend Experience as Bria Jones, as well as in her new film, It Comes At Night.

For those who have been a bit down since Downton Abbey stopped airing, we have some great news for you! Rumors had previously been swirling that a film was in the works and now we have a bit more information that indicates that the Downton movie is actually happening! Michael Edelstein told the Associated Press, “We are working on getting the script right, and then we’ve got to figure out how to get the (cast) together. Because as you know, people go on and do other things. But we’re hopeful to make a movie sometime next year.” What remains to be seen is if Dame Maggie Smith (Minerva McGonagall) will be involved. When the series ended last year, she made it quite known that she didn’t think that the Dowager Countess would be in the film, because she had to be over 100. Those of us who love the Dowager’s quips will continue to hold out hope for the return of the matriarch!

Katie Leung (Cho Chang) has a new film coming out, and the trailer released will have you holding your breath! The Foreigner, a story about the revenge of a London businessman whose teenage daughter has been taken from him, appears to be a return to the vengeance-action genre for Jackie Chan. How much is Katie in the film? Only time will tell. Take a look at the trailer for the film, which is set to debut in US theaters on October 13!

We’re super excited that Luke Youngblood (Lee Jordan) will be joining us in Orlando at Universal’s Diagon Alley this September as part of MuggleNet Live! 2017: Nineteen Years Later, and we’ll have the opportunity to ask him about his new job on the Nickelodeon network! The talented Luke posted this photo on his Instagram this week but didn’t really give followers a lot of detail.

Looks like we’ll have to find a way to make him spill the beans in September!

At least one familiar face has joined the cast of Road, an award-winning play by Jim Cartwright. Michelle Fairley (Mrs. Granger, Deathly Hallows) will star in the play, which will be directed by Cursed Child‘s John Tiffany, with sound by Gareth Fry, who also worked on Cursed Child. Road is set to debut at the Royal Court Theatre on July 21. Here’s the brief on the play’s plot:

Set in a working class area of Lancashire whilst Margaret Thatcher was in power, the play looks at the desperation in people’s lives through drama and humour. Set on a road on a busy night, the audience gets an insight into the characters lives by delving into the houses on the street.

We previously reported on the involvement of Jim Broadbent (Horace Slughorn) in the true story of the heist at Hatton Garden, the biggest heist in UK history. Stills from the set of Night in Hatton Garden have been released online this week, showing Broadbent looking completely relaxed. Take a look! 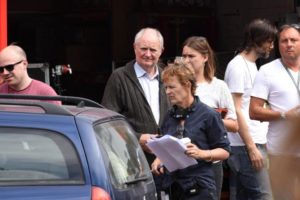 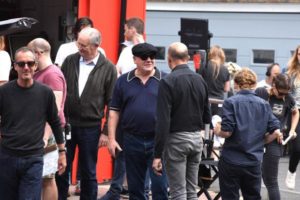 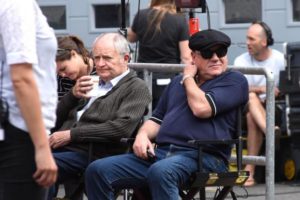 Finally, we previously told you about Domhnall Gleeson‘s (Bill Weasley) casting in The Little Stranger, but now the production has started to prep for filming! Starting July 6, filming on this project will begin in Winslow, but we have no idea if this means Domhnall will be in Winslow or if this is merely pre-production filming. Either way, we’re super stoked to see Domhnall take on this spooky ghost flick. Read the synopsis below!

The story is set in a remote English village after the close of World War II, when Gleeson’s local practitioner is called to the aged estate of Hundreds Hall to tend to a poorly parlour maid. The residence is also home to Rampling’s glamorous widow and her two grown children, played by Wilson and Poulter — a badly disfigured veteran of the war. The family welcomes Gleeson and he’s drawn into the mystery of the hall’s apparent haunting by a malevolent ghost, which ratchets up in intensity as he becomes more involved with the family.

That wraps up this edition of Role Call! Tell us what you thought about the latest roles for our alumni, and don’t forget to secure your ticket to hang out with us in Orlando on September 1! Unlimited butterbeer all evening, delicious food and desserts, talent panels and private experiences with our talented guests!