Special Viewing of “The Nighttime Lights at Hogwarts Castle”

Select park guests and various members of the media were treated to an exclusive viewing of the all-new projected light display “The Nighttime Lights at Hogwarts Castle” inside the Wizarding World of Harry Potter at Universal Studios Hollywood Wednesday night.

As the day drew to a close and the sun set over the park, guests and media flocked to the Triwizard Stage to get a view of Hogwarts Castle. Thrilled screams from the nearby ride, the Flight of the Hippogriff, and the excited chatter of those who had gathered filled the small space, mixing wonderfully with the music drifting from Hogsmeade. Park guests dressed in wizard robes took selfies in front of the castle, and children climbed onto the shoulders of their parents to get a better look.

Shortly thereafter, the lanterns in the viewing area dimmed, and “The Nighttime Lights at Hogwarts Castle” began.

The Sorting Hat, the show’s unseen narrator, leads viewers through an enchanting display of House pride. With stunning visuals and a medley of the films’ famous score – arranged by John Williams – this show is truly magical. Each House’s display, as well as the musical piece that accompanies it, is as unique as the Houses themselves. As the show draws to a close, the Houses unite to form the Hogwarts crest, and parts of the castle appear to fall away to reveal the iconic changing staircases and corridors within the walls. As the Sorting Hat finishes his speech, the House colors streak across the castle once more and collide, creating a beautiful shower of twinkling stars while “Harry’s Wondrous World” cheerfully plays over the speakers.

As a whole, the show was nothing short of spectacular. From the perfectly timed spotlights in the sky to the tiny, twinkling lights in the trees surrounding the audience, no detail was overlooked. Stephen Siercks, Senior Director of Entertainment Production at Universal Studios Hollywood, and a team of producers, designers, and technical managers, worked for over a year to tie every aspect of the show together – an effort that was clearly appreciated as the crowd applauded at the end of the five-minute display. Take a look at our video and photos from the event below! 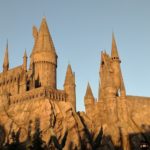 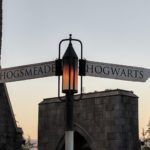 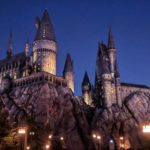 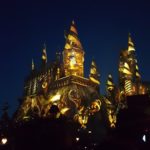 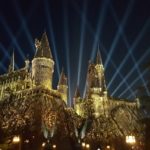 The show, which officially kicks off on June 23, will play multiple times per night throughout the summer so as many guests as possible can enjoy it. As is the norm with any special display at a theme park, if you want to get a good view, it’s best to show up early since the viewing area is small and quite crowded. So grab a butterbeer and a comfy spot near the Triwizard Stage, and get ready for a truly magical experience.

Can’t make it to Hollywood to see the show in person? No need to worry. Universal Studios Hollywood will host a Facebook Live event to stream the all-new “The Nighttime Lights at Hogwarts Castle” experience at the Wizarding World of Harry Potter on Friday, June 23 at 8:30 p.m. PST.

Press Release
Universal City, CA, May 18, 2017 – Beginning June 23, guests are invited to see “The Wizarding World of Harry Potter™” in a whole new light when Universal Studios Hollywood introduces its all-new “The Nighttime Lights at Hogwarts™ Castle,” featuring a dazzling light projection experience against the backdrop of Hogwarts™ School of Witchcraft and Wizardry.

As night falls on Hogsmeade village, “The Nighttime Lights at Hogwarts Castle” will shine brightly with an awe-inspiring spectacle that showcases the four houses of Hogwarts: Gryffindor, Ravenclaw, Hufflepuff and Slytherin that culminates with awesome beams of lights that fan into the night sky. The colorful state-of-the-art light display and special effects projection, designed to dance across the stunning Hogwarts castle, will be accompanied by a special musical arrangement created by Academy Award-winning composer John Williams based on his original scores composed for the film series. The musical arrangement that will emanate in a surround sound environment was conducted by prolific arranger William Ross and recorded by the London Symphony Orchestra in London.

This new summertime feature will take place multiple times a night during its run. Live rehearsals with annual pass previews and very limited guest access will begin in June in preparation for the June 23 grand opening. Inspired by J.K. Rowling’s compelling stories and characters that were brought to life in the Warner Bros. films, “The Wizarding World of Harry Potter” at Universal Studios Hollywood is a masterful recreation, faithful to the visual landscape of the fiction and films, including as its iconic focal point, Hogwarts castle.

From its snow-capped roofs and cobblestone streets to the historic British sensibilities that characterize the whimsical look and feel of the land, “The Wizarding World of Harry Potter” transports guests of all ages to the very places they watched on the silver screen. The architecturally stunning land also includes the incredibly captivating and highly acclaimed “Harry Potter and the Forbidden Journey” thrill ride, now enhanced with 4K-HD and ride film projecting at an astounding rate of 120 frames-per-second for an even more immersive glimpse into Harry Potter’s world, as well as “Flight of the Hippogriff™,” Universal Studios Hollywood’s first outdoor family coaster.

“The Wizarding World of Harry Potter” resonates with immense detail, inviting guests to revel in J.K. Rowling’s Wizarding World with the opportunity to enjoy authentic food and beverages at multiple locations, including Three Broomsticks™ and Hog’s Head pub, as well as the Magic Neep and Butterbeer™ carts. A foray through the shops adds to the authenticity of the land with eight retail venues and locations, including Honeydukes™, Ollivanders™, Owl Post™, Zonko’s™ Joke Shop, Wiseacre’s Wizarding Equipment, Dervish and Banges™, Gladrags Wizardwear and Filch’s Emporium™ of Confiscated Goods.