Review: Are Nano Metalfigs the Next Big Thing?

First off, I’m not much of a collector. I don’t own a Funko Pop!, character wands, or any special editions of the Harry Potter books. Now, don’t get me wrong; I think there is some fantastic merchandise out on the market, specifically MinaLima-related stuff, but I guess I just like saving money too much. So when it came time to receive some new exclusive figurines I was interested to see what all the fuss was surrounding collectibles.

Nano Metalfigs, only being sold at Walmart right now, is a brand new line of multi-franchise collectibles. Produced by Jada Toys, these small figurines, made with 100% die-cast metal, are a long-lasting addition to any Harry Potter collection. The Nano Metalfigs will be the smallest collectibles you will ever find on the market – they weight the same as about five quarters! With the price point of $0.97 for a single character and $4.97 for the five-figure packs, these will also be the cheapest products officially licensed with the Harry Potter named connected to it, including at garage sales. Yeah, I know, that price caught me off guard too.

After doing some digging on these Walmart exclusives, those prices turned out to be the suggested price point, which most physical Walmart locations are staying at. However, an online Walmart marketplace vendor, Toywiz, lists almost all of the individually packaged Harry Potter characters for $4.99 and the Dementor for $12.99. Crazy, right? Perhaps the price increased so drastically because they are selling like Wizarding World butterbeer in August. There was talk at the beginning of July that this was just going to be the first wave of characters, and now that Nano Metalfigs are selling out, that may become a reality. The characters being sold range from the classic Year 1 Harry Potter to the slightly freaky-looking Dementor. There are also three Fantastic Beasts Nano Metalfigs: Newt Scamander, Tina Goldstein, and Jacob Kowalski. My personal favorites are Year 1 Hermione and Newt Scamander. Both of the five-figure packs each include two exclusive figures that are not sold individually. In one pack, it’s Arthur and Percy Weasley, and in the other, it’s Marcus Flint and Professor McGonagall. 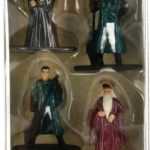 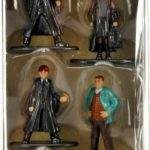 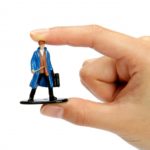 If you feel inclined to purchase these nano figurines, the best purchasing strategy would be to buy the two “5 Pack Figure Collectors Sets” first. This insures that you will get your hands on the exclusives right off the bat. As I have mentioned already, I am not a collector, but I am seriously debating on buying some more of these even though I already have ten. They are adorable, and totally worth it. Due to their small nature, any number of Nano Metalfigs would fit perfectly on a bookshelf or be a nice addition to a desk. The one downside to the figurines is that the painting, specifically on their faces, isn’t done that well. Year 1 and Year 7 Harry Potter both do not have eyes, just the rims of his glasses. Also, I couldn’t tell who the last figurine, Percy Weasley, was until I turned the package around to read the label. He is wearing his Ministry outfit and doesn’t have red-enough hair, so he just looks like a random Ministry worker. 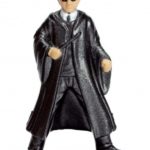 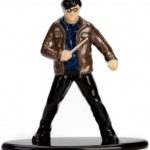 In all honesty, I’m totally sold on these. When I had shown these to my mom, we both agreed that they are almost too cool to take out of their packaging. Seeing as this is a new line of collectibles, I would like to add my wish list for future Nano Metalfigs into the imaginary suggestion box: Luna Lovegood, Dobby, the Fat Lady hiding behind a hippo, and a Demiguise.

These Walmart exclusives are only available until August 1, so hurry up and run to your local store to snag these adorable, unique collectibles. Or simply run over to your wallet so you can buy them on Walmart’s website.

Do you want to see the real Percy Weasley and maybe even take a picture with him and several other Potter alumni? Come join us at King’s Cross Station at Universal Studios Florida during the MuggleNet Live! 2017: Nineteen Years Later event!

I was first introduced to the Boy Wizard in 1999 through my aunt and fell in love with the stories when I started reading them in 2005. As a Hufflepuff with Ravenclaw tendencies, I'm a hard-working creative who loves Graphic Design, Landscape Photography, Doctor Who, and Disneyland.