Stephen Sondheim’s Follies has returned to London after 30 years for a breathtaking revival at the National Theatre. Directed by Dominic Cooke, Imelda Staunton joins a cast of 37 in the role of Sally and further confirms her legendary status in London’s musical theater scene.

Follies takes place over the course of one night at a reunion of the Wiseman Follies, the Wiseman Theater’s showgirls troupe, who have returned to New York City on the eve of the theater’s demolition. Set 30 years after their last performance, Follies follows the characters as they share exaggerated stories and reminisce about their shared past. Mixing nostalgia and memory, the story centers on the relationships between Sally (Staunton) and fellow ex-showgirl Phyliss (Janie Dee), and their husbands Buddy (Peter Forbes) and Ben (Philip Quast), as they regret what could have been.

Follies has a performance time of 2 hours 15 minutes with no interval. This can seem intimidating. Yet despite an initially slow start, the time soon flies by as you are wrapped up in the characters’ stories. Staunton gives a marvelous performance, encapsulating Sally’s emotional journey from initial excitement and naivety in her relationships, to her longing for the past and pain for a love that wasn’t meant to be. This emotional journey gives Sally some of the most poignant and moving songs in Follies, all of which Staunton delivers beautifully. “Don’t Look at Me” is a comedic take on meeting an old flame many years after the fact, tainted with the sadness and awkwardness that time creates, and her rendition of “Losing My Mind” sung by a broken and loveless Sally was one of the standout musical moments of the show. After receiving Olivier Awards for her previous performances in revivals of Sondheim’s Gypsy and Sweeney Todd: The Demon Barber of Fleet Street, accolades are sure to be on the horizon for Staunton’s interpretation of Sally.

Despite the considerable cast size, there are notable performances all around. Dee is particularly hilarious as Phyllis, delivering her dry and dark humor with excellent timing, and Di Botcher (Stella) gives her everything to the classic musical number “Broadway Baby,” much to the delight of the audience. Another standout musical moment in Follies is performed beautifully by Josephine Barstow, in which her character performs the operatic number “One More Kiss” with her younger self, who is dressed in her elaborate Follies Showgirl outfit.

The most intriguing thing about Follies is the use of both the character’s younger and older selves on stage. Each character is shadowed by a younger version of themselves who watches their older counterpart, allowing the audience to see their former glory and creating a physical interpretation of the metaphoric “shadow of their youth.” For Staunton and Dee, the lines between old and young are blurred further as the young characters start to react more and more to their older selves. It’s these moments that Dominic Cooke’s direction distinguishes Follies from other musicals dealing with similar themes of regret and memory and adds another level of meaning to this revival.

This imagery, coupled with the outstanding performances of the cast, makes this production of Follies a must-see for fans of musical theater! 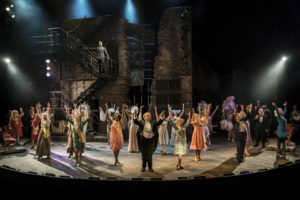 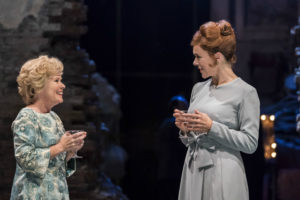 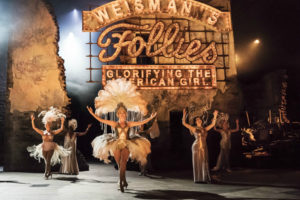 Follies runs until January 3, 2018, at the National Theatre, London, and tickets are available here. If you are unable to make it to a performance, the show will also be shown in movie theaters worldwide on November 16 as part of the National Theatre Live series.