MuggleNet has covered many conventions over the years. From cons specifically devoted to all the wizardy things to gatherings that encompass nearly every geeky thing ever created since the dawn of time, it’s a pretty safe bet that volunteer staff members Michele, Savannah, and myself will lose our minds at a comic con.

The folks over at ReedPop have been very good to us over the last few years, and this year was no exception. In addition to providing us with press passes to cover the convention, we received emails from exhibitors, artists and authors, letting us know where to find them and what great things they had in store for attendees. All of this extra information helped the three of us form a plan of attack for the four- day convention.

So, what happens when three social media and news staff members descend upon Seattle and experience all that Emerald City Comic Con has to offer? We sample the delicious local cuisine; we experience a cosplay crush that takes place when we meet the Hogwarts House founders cosplayers; and at the end of the night, we awkwardly make googly eyes at Matt Lewis from the seventh row of his standing-room-only panel in hopes that he’ll look over and recognize us.

Let’s start with the cosplay. To say that the fans we saw dressed in costumes were creative would be an understatement. Even descriptions such as stunning, amazing, and mind-blowing wouldn’t do it justice. The amount of thought and talent it takes to put together some of these outfits must be staggering. It’s not just that these fans pick a character from the books or films to portray. It’s the fact that they come up with group concepts, that they make their own jewelry. They carve their own wands. They pick fabrics and construct these designs with amazing finishing touches that make you stare with wonder, going over and over the costume and picking out some new detail you missed the first, second, and even third time around. We covered some of these amazing designs during the weekend over on our Instagram and MuggleNet Live! Twitter account, but now we want to share these cosplayers and their talent with you here! 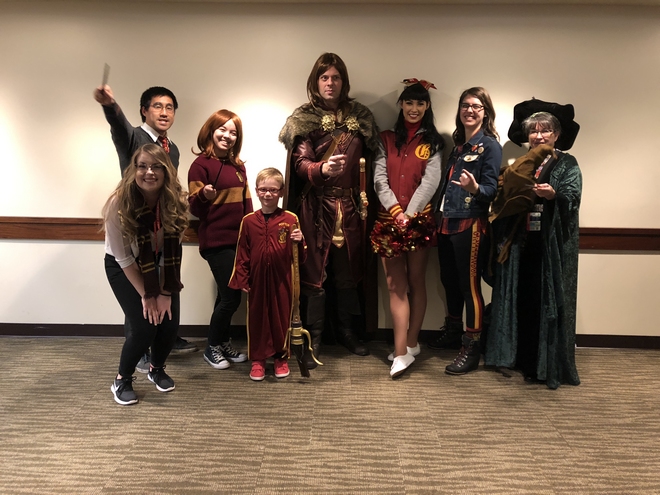 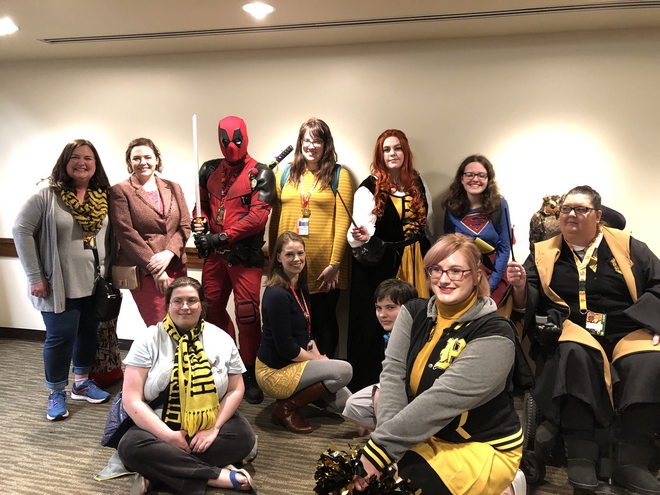 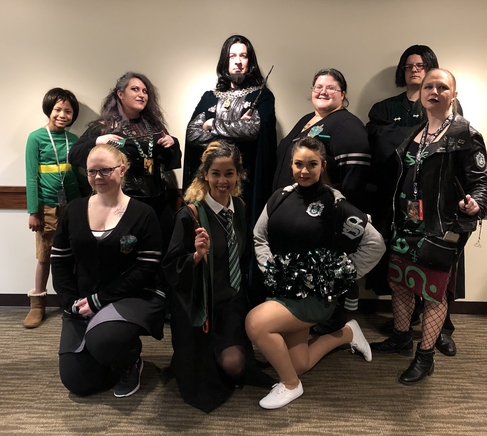 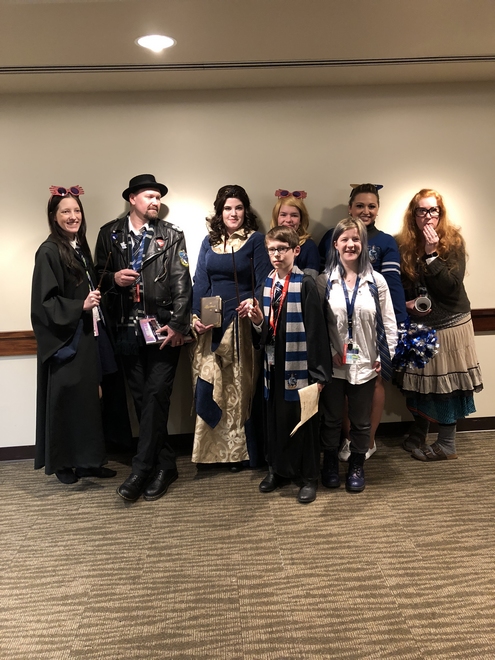 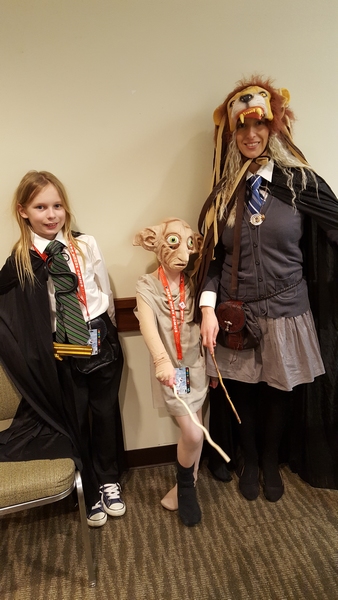 Amanda as Luna, McCallister as Dobby, and Lucien as a Slytherin student 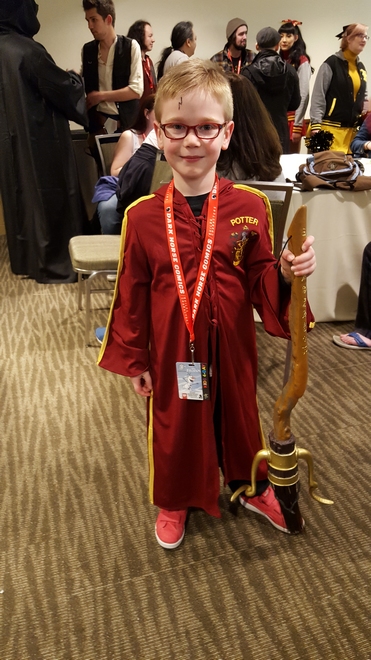 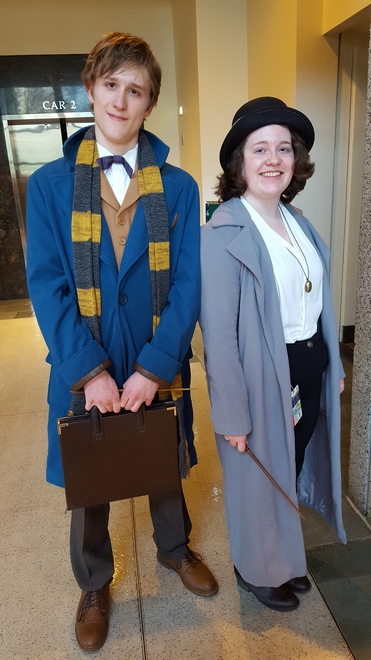 Newt and Tina cosplay by Carl and Meg 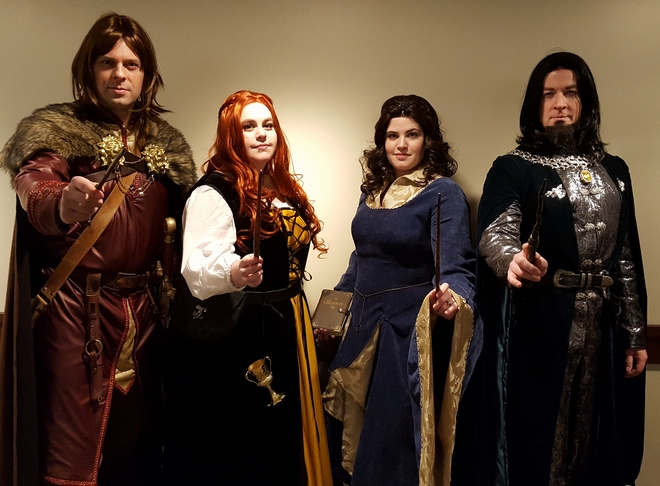 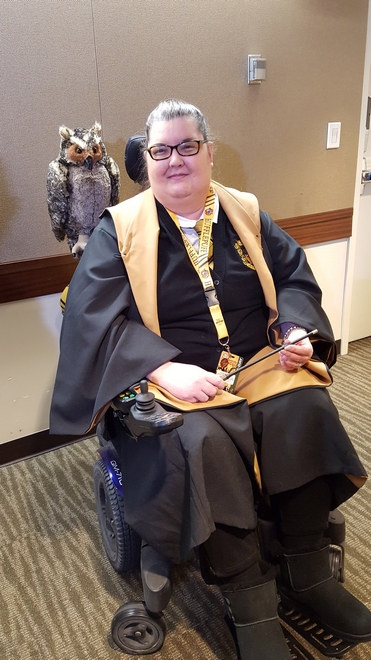 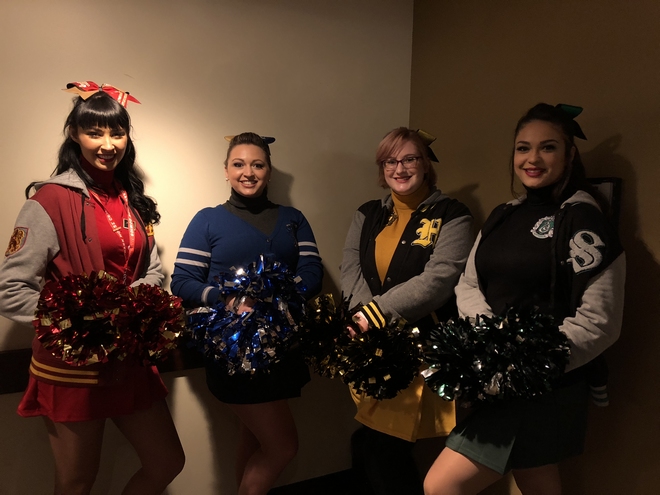 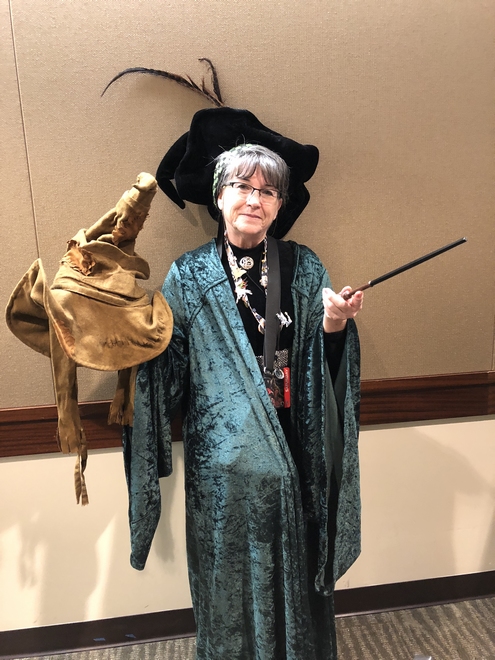 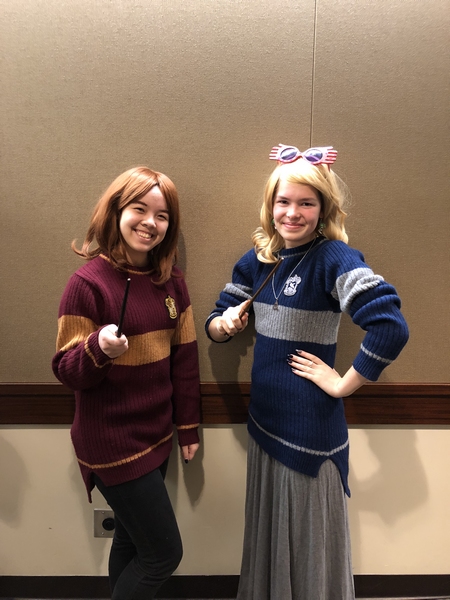 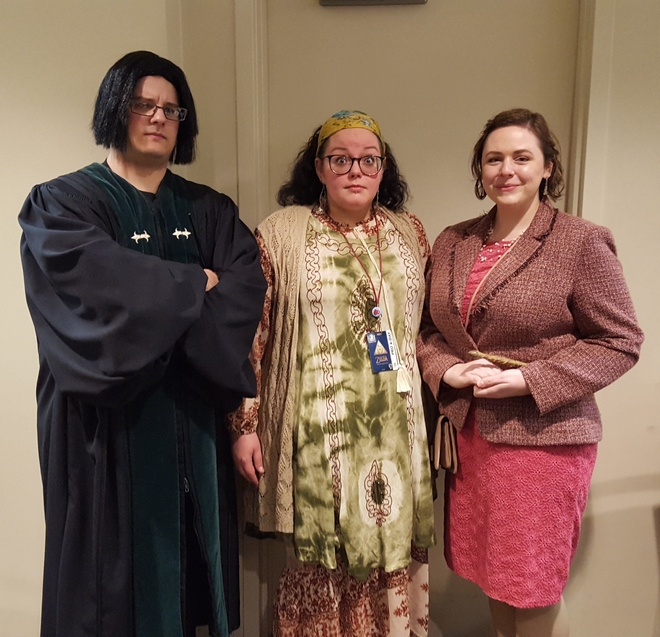 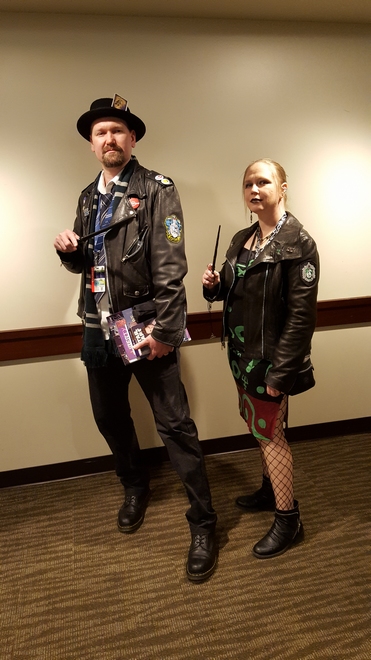 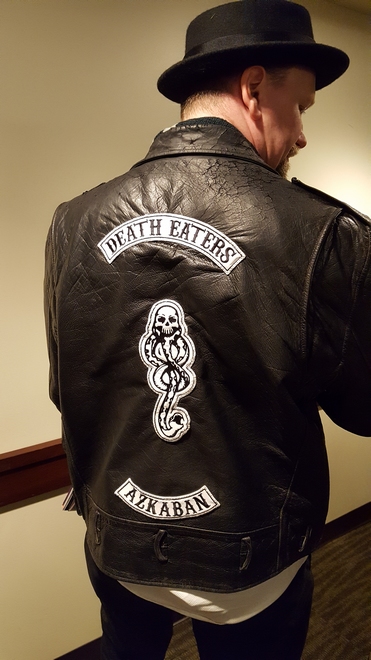 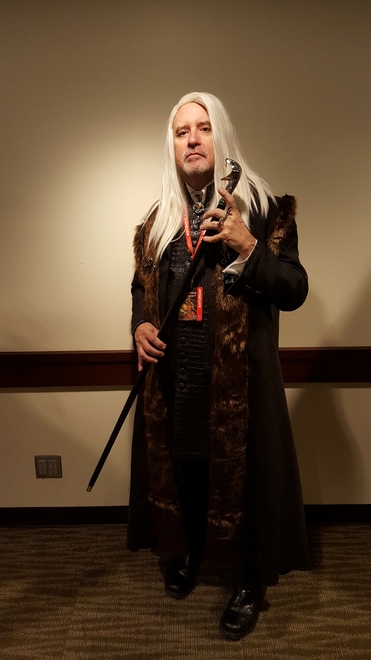 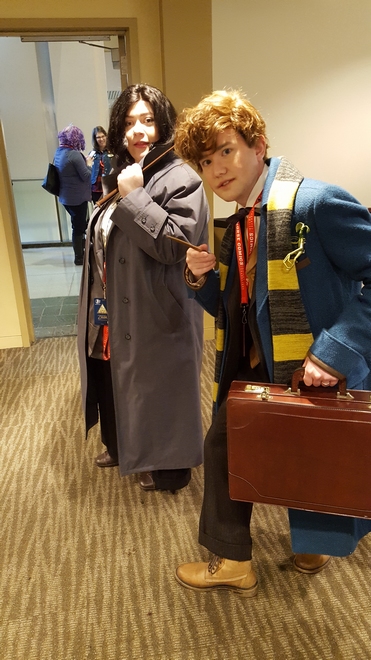 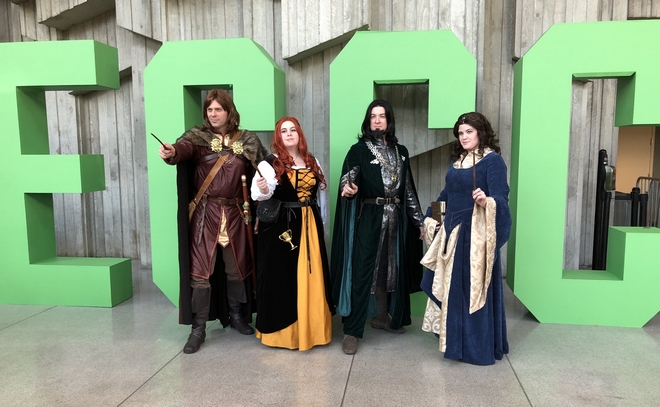 At the end of our day, we made our way to the ECCC Main Stage for one of our most-anticipated events of the convention: the Matthew Lewis panel. Savannah was able to get a photo with him earlier in the day and was so thrilled to even have a few seconds of his time. In his panel conversation, Matt relived some of his memories from auditioning for the Potter films, his first day on set of Harry Potter and the Sorcerer’s Stone, and doing his own stunts in the final film. He even hypothesized on what Neville’s Patronus would be. As an audience member recalled for Matt, in the books, Neville’s Patronus is only listed as “non-corporeal,” but Matt is pretty confident in saying that Neville would have had a full-bodied Patronus.

Matt also answered a question that has been debated among MuggleNet staff for a long time – whether the new term “Longbottoming” is objectifying him and how he feels about the term now being a part of pop culture.

Yes, yes. It’s very charming, it’s very nice. I’m not going to sit here and tell you, ‘Oh, woe is me. It’s so terrible, being thought of in these ways. It’s very objectifying, etc.’ because it’s just simply not true. It’s lovely. But I will also say, ‘I don’t think it’s really about me.’ Truthfully, I mean, it’s called Neville Longbottoming for a reason. It’s not called Matthew Lewising. It’s because it’s Neville [who] took that incredible journey. It’s Neville [who] evolved and became the hero, and it’s the character that Jo Rowling created and wrote and has gone on to inspire so many people. I wish I could say it’s me, but it’s not – it’s him. And so yeah, it’s very humbling, but I would have to stop and say, ‘That’s Jo’s character. That’s what she did.’ I’m a very, very small part of the big picture of Neville Longbottom. So it’s as much hers as it is mine, probably moreso.

Tom and I live quite close to each other so I see him quite often in the pub. Driving his skateboard around, busking in the street, playing his guitar. He can often be seen down by the beach, playing his guitar. I don’t think he takes money. He might do, I don’t know. He’s quite talented, so people might give him money.

Matt let it slip that he lost his pub buddy for a time however, as Tom is currently in South Africa filming a show. We’ll have to follow up on this tidbit and see where it leads us!

As far as for his friends on set, Matt gave a shout-out to a friend who hasn’t been returning his messages.

When I was on the film, I think probably Alfie Enoch, who played Dean Thomas, who’s now a big Hollywood star now, Alfie, doing various tv shows. He doesn’t even text me back anymore; he’s too big-time now, Alfie. [laughs] No, it’s not true, he’s fine. He was my best buddy throughout filming. He was a good guy.

Check back for Part 2 of our Emerald City Comic Con coverage, in which Savannah checks out the Doctor Who panel with David Tennant and then find out why we freak out in taking advantage of the Funko lottery to purchase ECCC-exclusive Pop! figures!