Appreciation for the Whomping Willow

Today is National Love a Tree Day, a time to show our appreciation for those wonderful arboreal friends of ours. The Whomping Willow is far from the friendliest tree. You probably wouldn’t want to sit in its shade or climb its branches (good luck trying). The Willow has some clear aggression issues, but taking out its anger isn’t always a bad thing in the end. Here are some reasons to thank the Whomping Willow for its bouts of rage.

1. It protected students from a werewolf (and a werewolf from students).

We can’t forget why the Whomping Willow was planted in the first place: to give Remus Lupin a safe, secluded place to transform every month, where other students couldn’t get near him. Other than a few unfortunate occasions, it did its job well, allowing Remus to attend Hogwarts without serious risk to himself or others.

2. It caused the Ford Anglia to veer off into the Forbidden Forest.

Much to Ron’s chagrin, his father’s flying Ford Anglia escaped into the Forbidden Forest after taking quite a beating from the Whomping Willow. But that made the car perfectly placed to rescue Harry and Ron from Aragog and his family of Acromantulas. Four for you, Whomping Willow. You go, Whomping Willow!

Although it certainly didn’t make life easy for Ron during his second year, the fact that his wand was broken turned out to be of the utmost importance. If Lockhart had grabbed a working wand from Ron in the Chamber of Secrets, he would have successfully Obliviated Harry and Ron, leaving Ginny to die and the two boys to live out their lives in St. Mungo’s. As much of a struggle as Ron had in classes, it was worth it to save his sister and keep his memories. Ten points to the Whomping Willow! 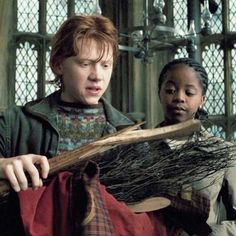 While it was heartbreaking to see Harry’s first broom smashed to smithereens, he ended up with a brand new Firebolt, courtesy of Sirius Black, on which he won Gryffindor the Quidditch Cup and successfully snatched a golden egg from a Hungarian Horntail in the Triwizard Tournament. It was sad to see the Nimbus go, but the replacement was even better.

There’s a sunny side to every situation, every cloud has a silver lining, and from each murderous tree blooms the tiniest bud. Maybe don’t try to give the Whomping Willow a hug today, but consider showing your admiration from a safe distance. Happy Love a Tree Day!