The United States National Team took first place at the International Quidditch Association World Cup this past weekend in Florence, Italy. This is the third gold medal for the team, following first-place finishes at the 2012 Summer Games and 2014 Global Games.

The US team showed up ready to go on the first day of the World Cup, winning all four of their matches. The scores for their first day of games were USA vs. Ireland: 230*–0, USA vs. Italy: 160*–20, USA vs. Australia: 90*–60, and USA vs. Brazil: 250*–0 (an * indicates a Snitch catch, rewarding the team 30 points). The US managed to catch the Snitch in all four games and even came away with two shut-outs. This placed them as the number third seed when entering bracket play on Day 2 of matches.

In the round of 16, the US faced off against Austria. This was the only match the US didn’t come away with a Snitch catch, but they still pulled off a win of 180–60*. Advancing to the quarterfinals, USA once again faced off against defending world champion Australia. They came out victorious with a final score of 100*–30. The team then went on to beat the United Kingdom in the semifinals 160*–40, setting them up to face Belgium in the final match. With a speedy 38-second Snitch catch by Seeker Harry Greenhouse, they defeated Belgium with a score of 120*–70, taking back the gold medal for the third time.

US national team coordinator Amanda Dallas was proud to see the team pull off another championship victory.

Our athletes and staff poured their hearts and souls into this redemption run… The coaches and I truly could not be more proud of this squad.

The United States has taken a team to the IQA World Cup all four years since it started in 2012. They took gold at both the Summer Games in 2012 in Oxford, United Kingdom, and the Global Games in 2014 in Burnaby, Canada. In the 2016 Quidditch World Cup, they were defeated by Australia in the final, taking silver.

The IQA World Cup has come a long way since its beginning, with only five teams attending in 2012 and seven in 2014. 21 teams competed at the 2016 World Cup and an additional eight teams joined this year to bring the total to 29 competing teams. Belgium, who took home the silver, and Turkey, who came in third to take the bronze, both won their first IQA World Cup medals this year.

145 players tried out for the 2018 USA team, participating in in-person training camps and tryouts across the US. The 25 chosen players came from 13 different US quidditch teams. Six of the players are members of Texas Cavalry, the back-to-back champion from 2017’s US Quidditch Cup 10 and the community division of this year’s US Quidditch Cup 11. The University of Texas at Austin also contributed six players and 16 other US universities were represented as well. This year’s team captain was Augustine Monroe, five-time IQA/USQ Cup champion.

All photos are courtesy of Miguel Esparza/USA Quidditch: 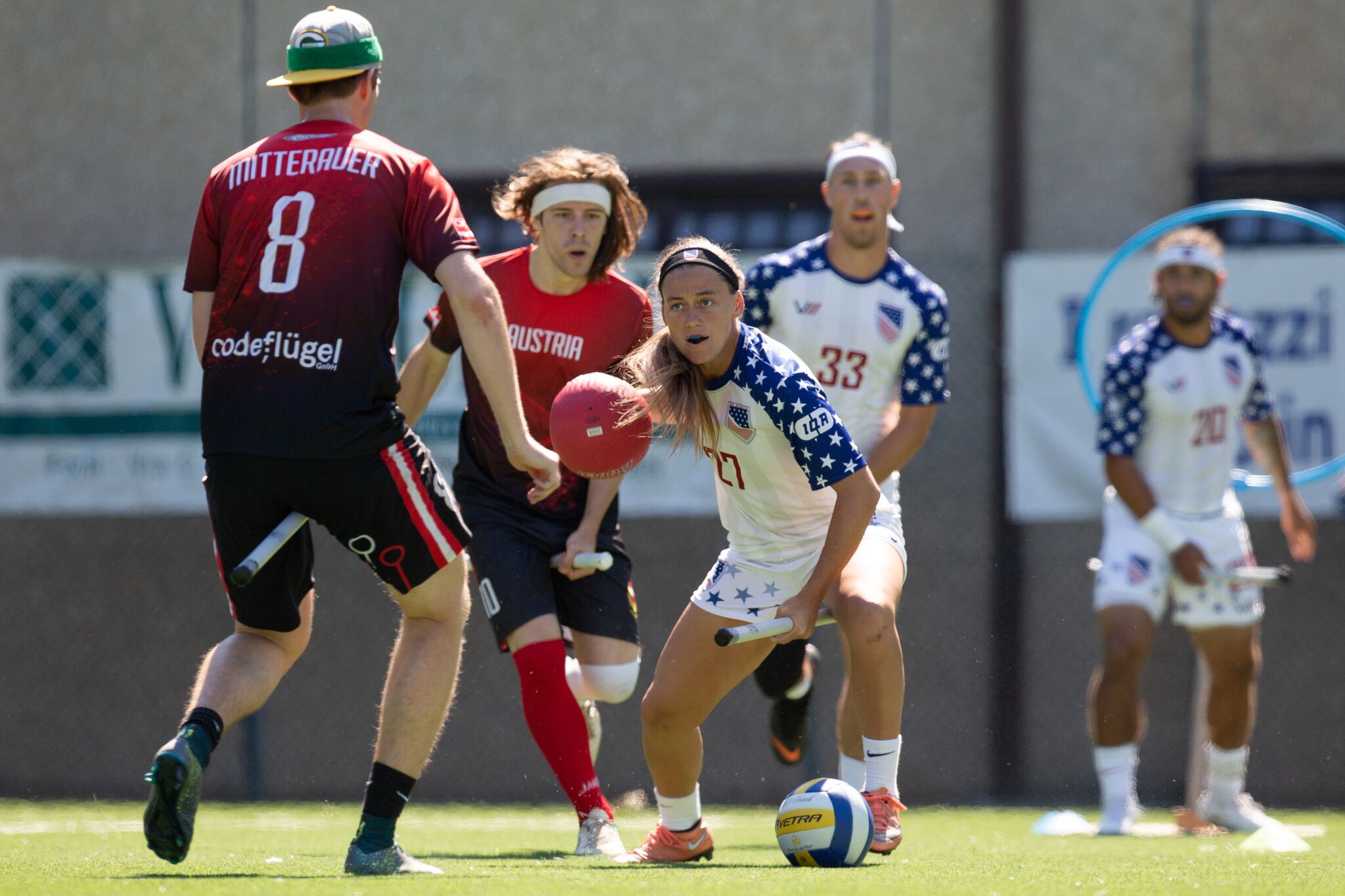 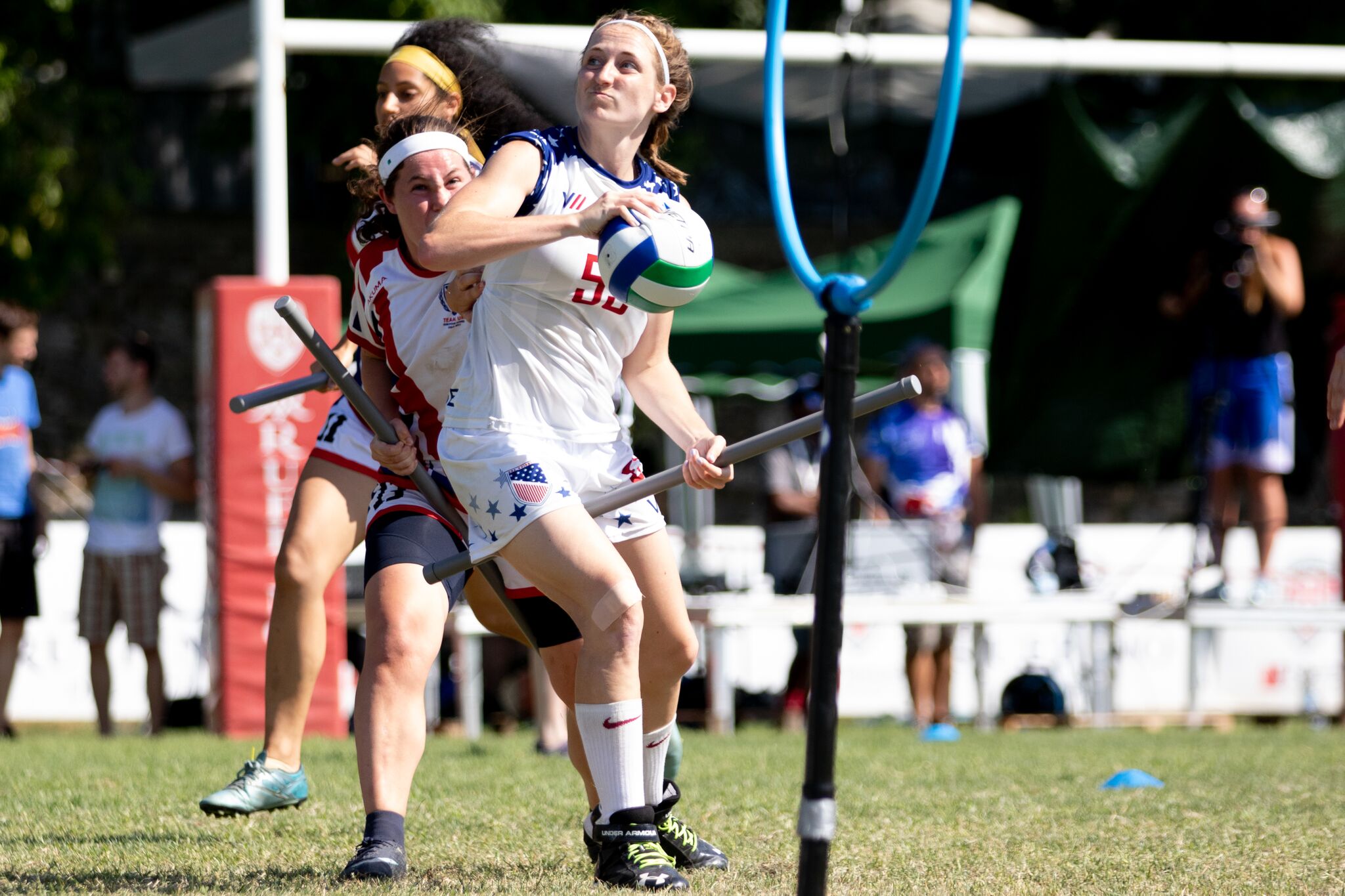 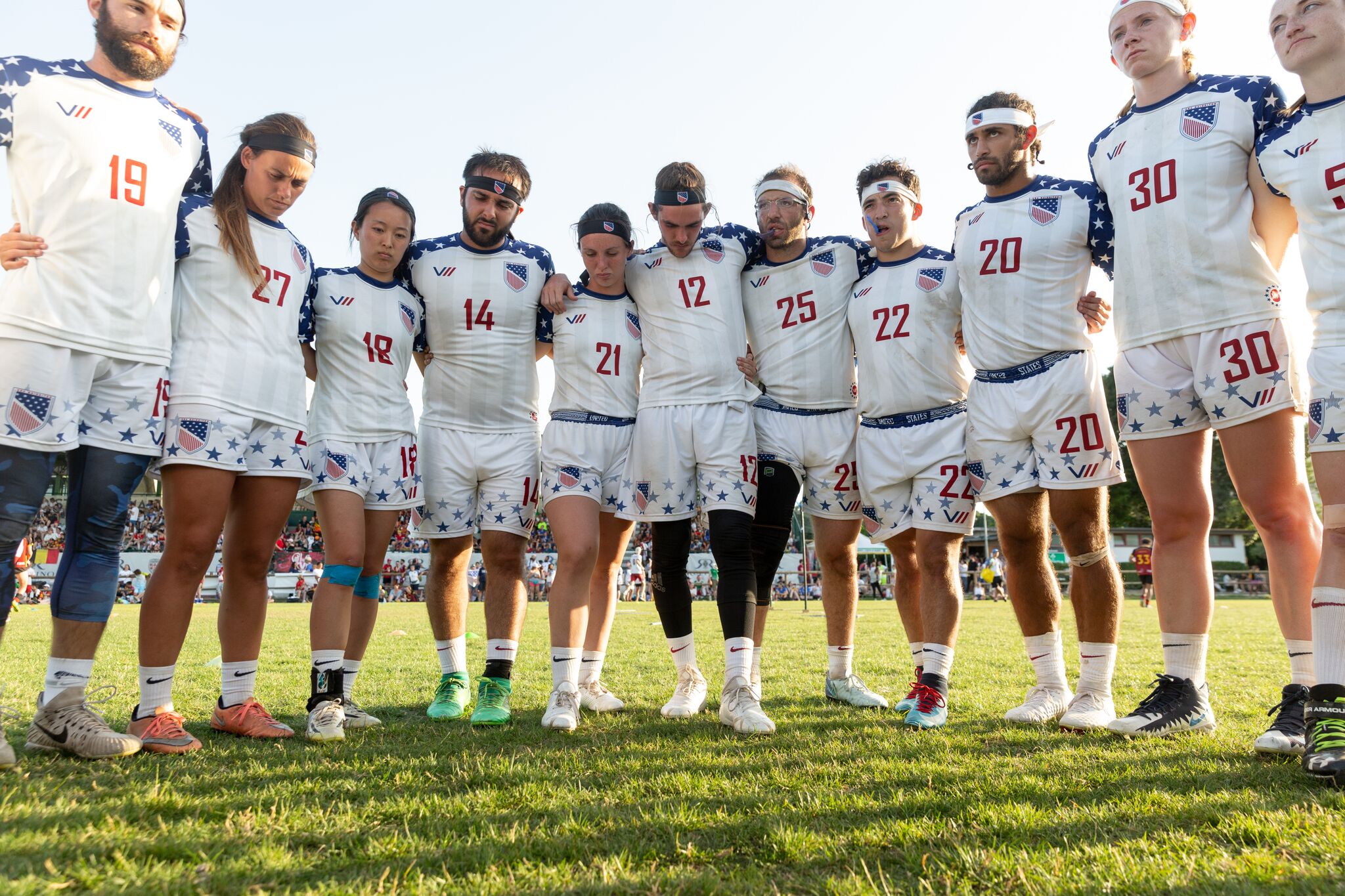 USA team before a game 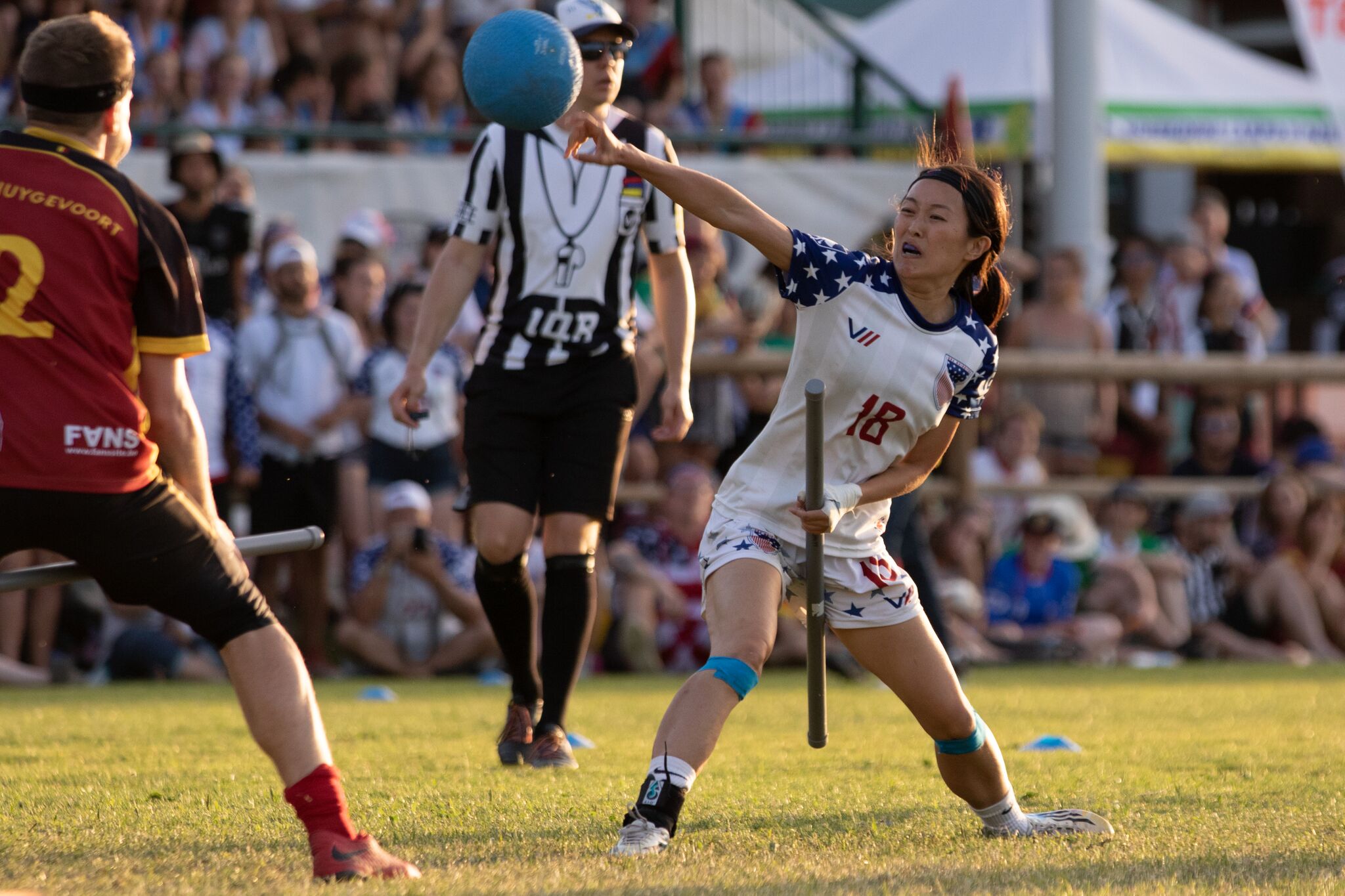 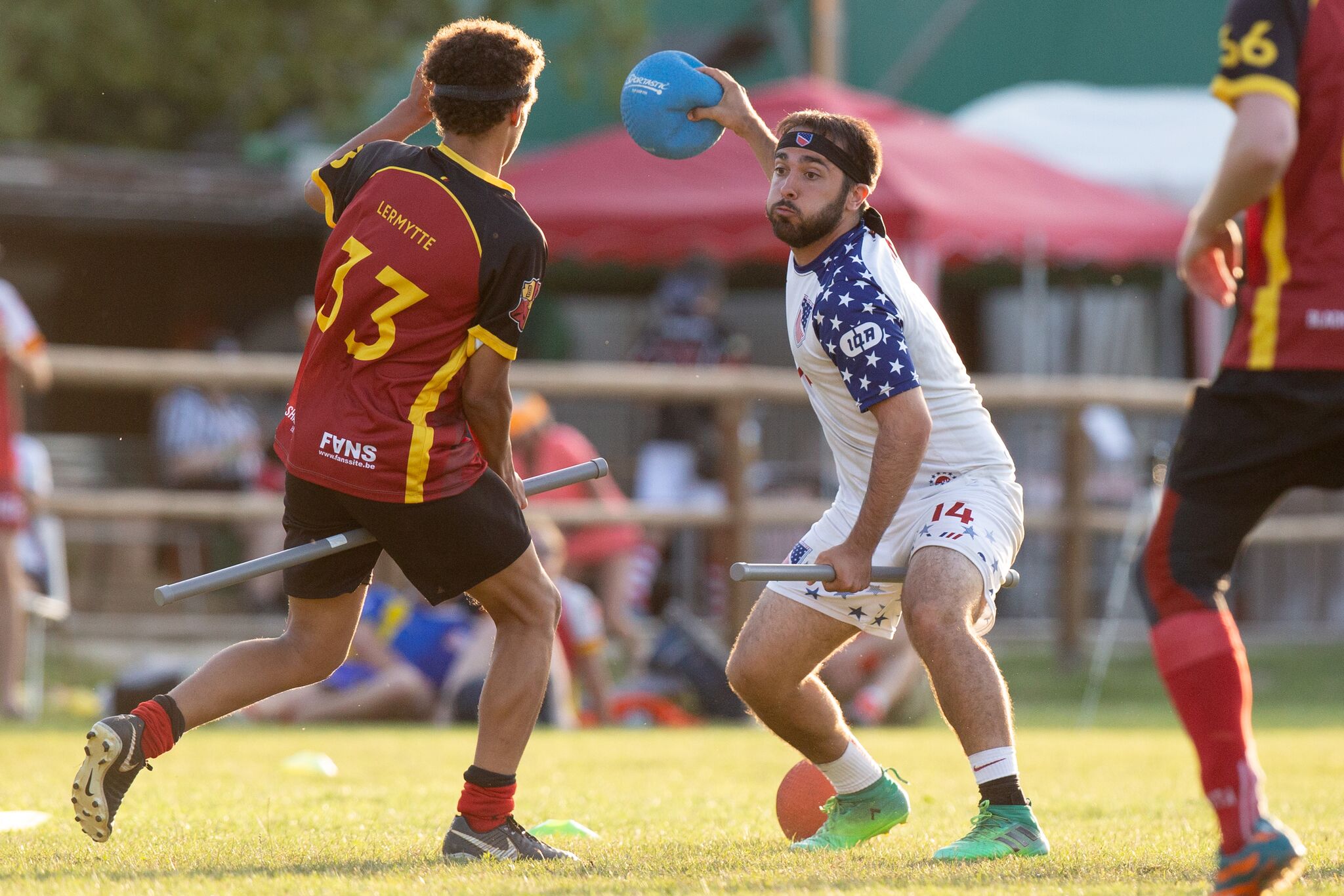 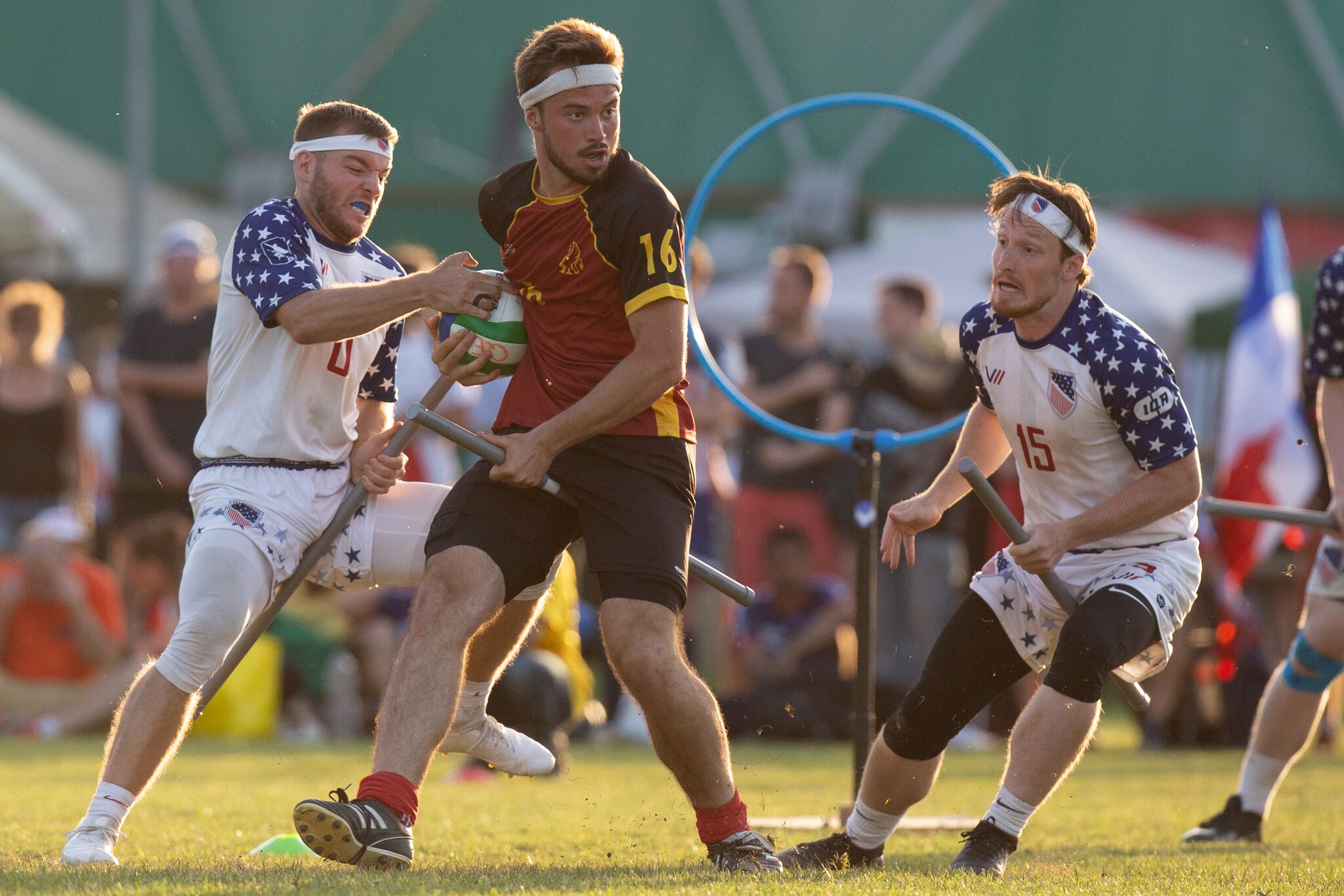 Chaser Andrew Axtell attempts to strip away the Quaffle from Belgium with Luke Langlinais on his right, during USA vs. Belgium 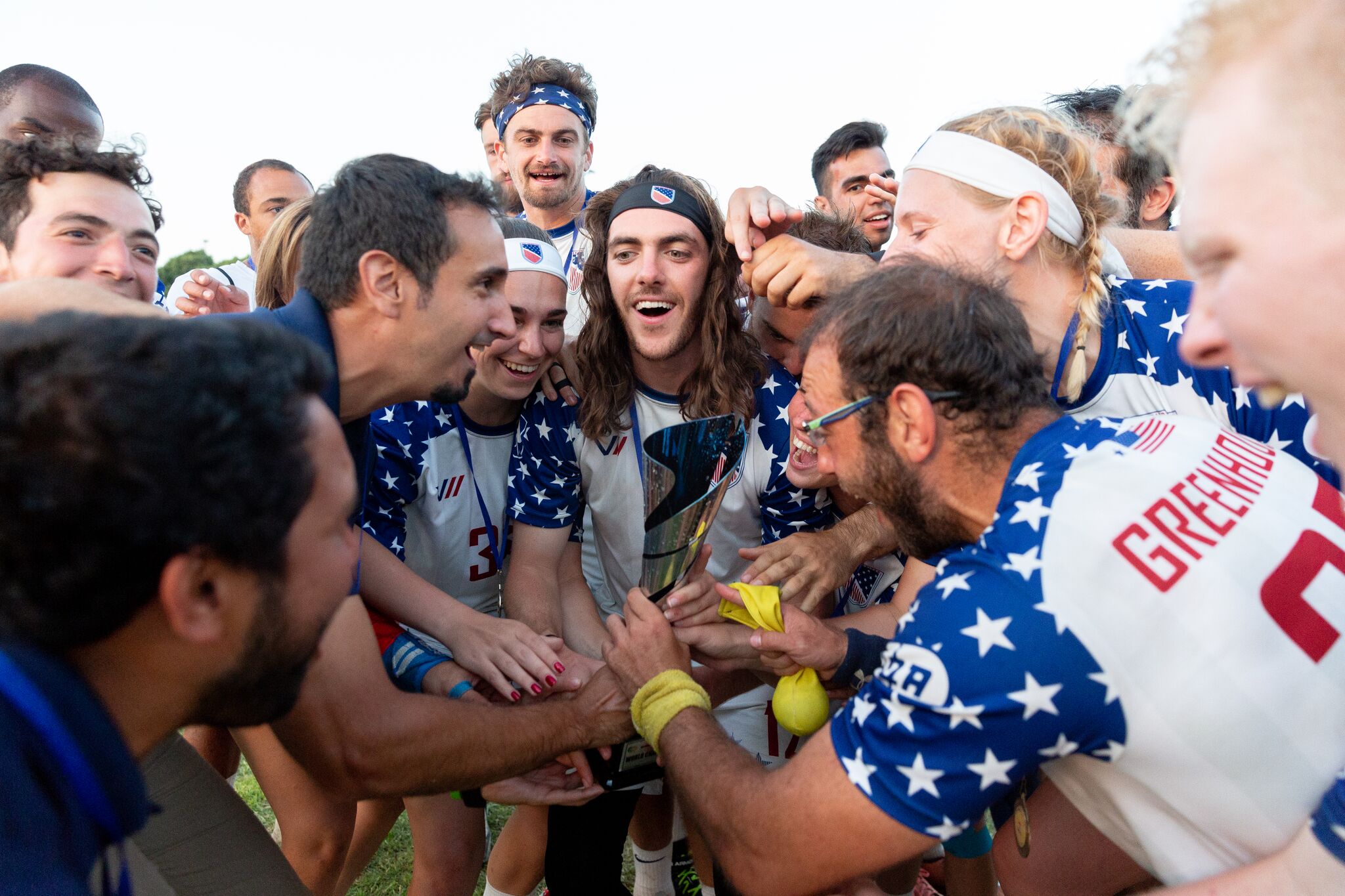 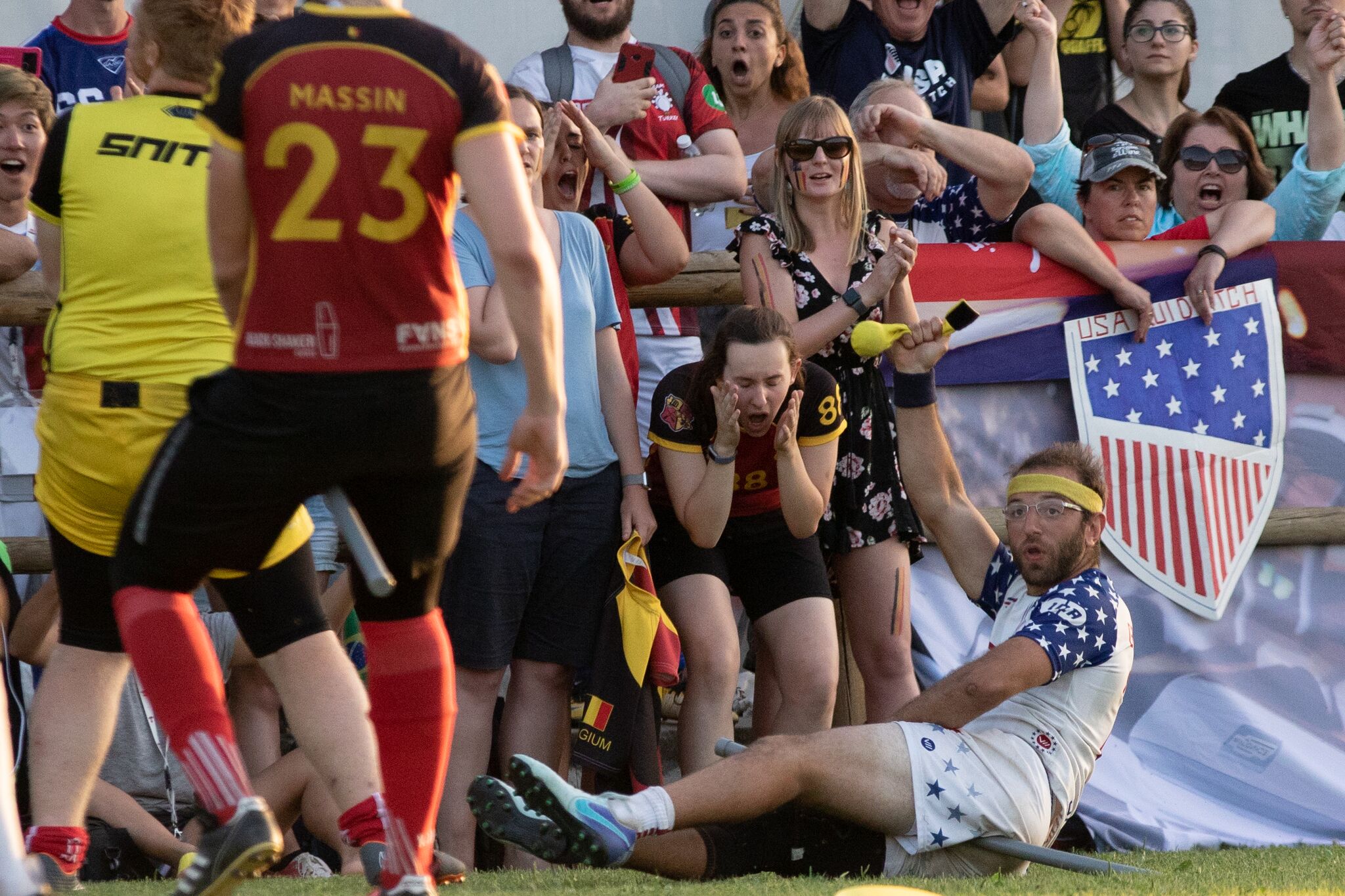 Harry Greenhouse right after catching the Snitch, during USA vs. Belgium 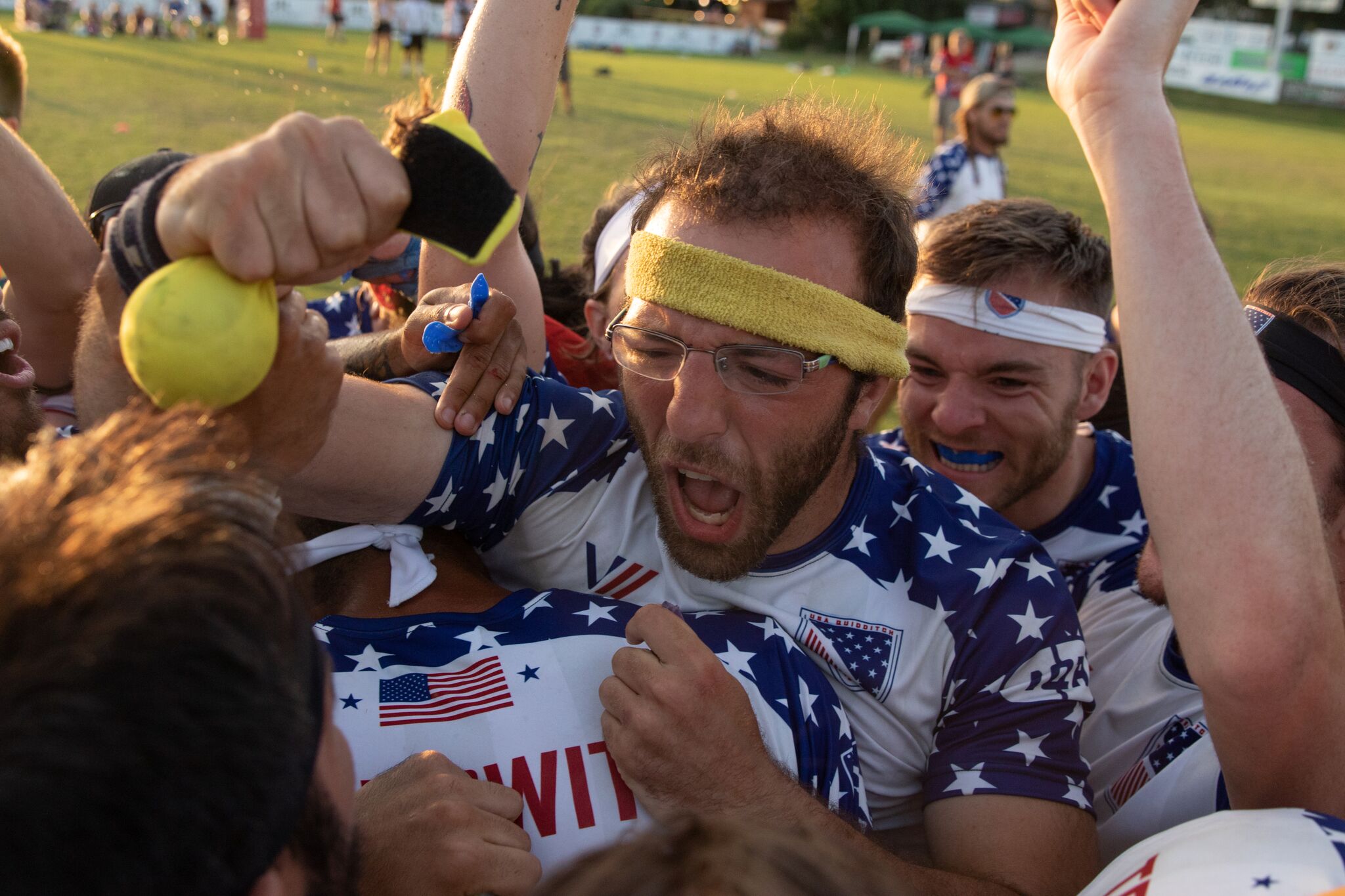 The US National Team (USNT) went 4-0 on day one, and entered bracket play as the three seed.

They defeated defending world champion Australia twice en route to the title match, both in pool play and in the quarterfinals.

After beating UK in the semifinals, the USNT won a victory over Belgium, 120*-70. This is the third gold medal for the team, having placed first at the 2012 Summer Games and the 2014 Global Games.

FLORENCE, ITALY — The U.S. National Team won its third IQA World Cup title on Sunday, defeating Belgium by a score of 120*-70 in Florence, Italy. Seeker Harry Greenhouse caught the snitch within 38 seconds, recording his sixth snitch catch of the tournament.

There were 29 teams in attendance at the quidditch world championship. Matches took place on June 30 and July 1 at Polisportiva U.S. Affrico, located in the Campo di Marte area of Florence. Belgium and Turkey received their first World Cup medals on the World Cup - Belgium with silver and Turkey with bronze.

"Our athletes and staff poured their hearts and souls into this redemption run," said Amanda Dallas, U.S. National Team coordinator. “The coaches and I truly could not be more proud of this squad.”

This tournament marks the fourth appearance of the U.S. National Team on the international stage, having previously attended Summer Games in 2012 (Oxford, United Kingdom), Global Games in 2014 (Burnaby, Canada), and the Quidditch World Cup in 2016 (Frankfurt, Germany). They received gold in 2012 and 2014 and took silver in 2016. The 2018 team saw 145 players try out. Athletes underwent a rigorous process that included in-person training camps and tryouts across the U.S. The 25 players who made the cut hail from 13 different USQ teams, with the most (six) coming from Texas Cavalry, community division champion at US Quidditch Cup 11 in April 2018. Six of the players went to University of Texas at Austin; 16 other U.S. universities are represented on the team. Five-time IQA/USQ Cup champion Augustine Monroe served as playing captain. The hashtag for the team is #RedeemTeam2018.

Quidditch was adapted from the Harry Potter novels in the U.S. back in 2005, growing rapidly with 400 local teams around the world. It combines elements of rugby and dodgeball to create a fast paced, full contact, gender-inclusive sport. Quidditch is played with seven players to a team all mounted on brooms. Three chasers score goals by putting the quaffle (a volleyball) through any of three hoops at the opposite end of the field. A keeper defends the hoops, while two beaters throw bludgers (dodgeballs) at opposing players to temporarily knock them out of the game. Meanwhile, each team’s seeker tries to catch the snitch: an autonomous yellow-clad athlete who has a tennis ball in a custom-made velcro tail hanging from the back of their shorts, similar to flag football. A game of quidditch ends when the snitch tail is caught, and the capturing seeker’s team is awarded an additional 30 points.

About the International Quidditch Association

The International Quidditch Association (IQA) is the governing body for the sport of quidditch. It was founded as the Intercollegiate Quidditch Association in 2009 following the very first intercollegiate quidditch match. In 2010, the IQA took its current name, and 2016 saw its induction as an international sports federation with its creation of the Congress. It now comprises more than 20 national associations governing quidditch in their respective nations.

US Quidditch (USQ), a 501(c)(3) nonprofit organization and the national governing body for the sport of quidditch, organizes US Quidditch Cup. USQ advances the sport by organizing events and programs that build community and empower all genders to compete together. The organization includes official club teams at traditional sports powerhouses like the University of Texas; University of California, Los Angeles; and University of Florida. Teams compete over a year ­long season. USQ hosts seven regional championships that crown regional champions and are part of the qualification process for teams attending the annual US Quidditch Cup. At these events, teams compete in one of two divisions: collegiate and community. US Quidditch is not affiliated with JK Rowling, Warner Bros., or Time Warner.

Notes to the Editors: U.S. Results Day One, Pool Play

Countries who attended the World Cup: