The 20th anniversary of Harry Potter and the Sorcerer’s Stone is quickly approaching and the United States is preparing for all the festivities. With the anniversary of the release of Sorcerer’s Stone falling on the same day the Hogwarts school year begins, it’s bound to be a magical day all around. We already have a new set of 20th-anniversary-edition books illustrated by Brian Selznick and now we can relive the joy of seeing the movie in theaters as well!

Cinemark Theatres is bringing Harry Potter and the Sorcerer’s Stone back to theaters for one week only along with the other seven Potter films and Fantastic Beasts and Where to Find Them! All 141 Cinemark XD locations are participating in the Wizarding World XD Week from August 31 through September 6. Individual tickets to the films can be purchased for $5 each, but if you want to see all nine, you can get a festival pass for $25 to have access to all of the movies all week long. 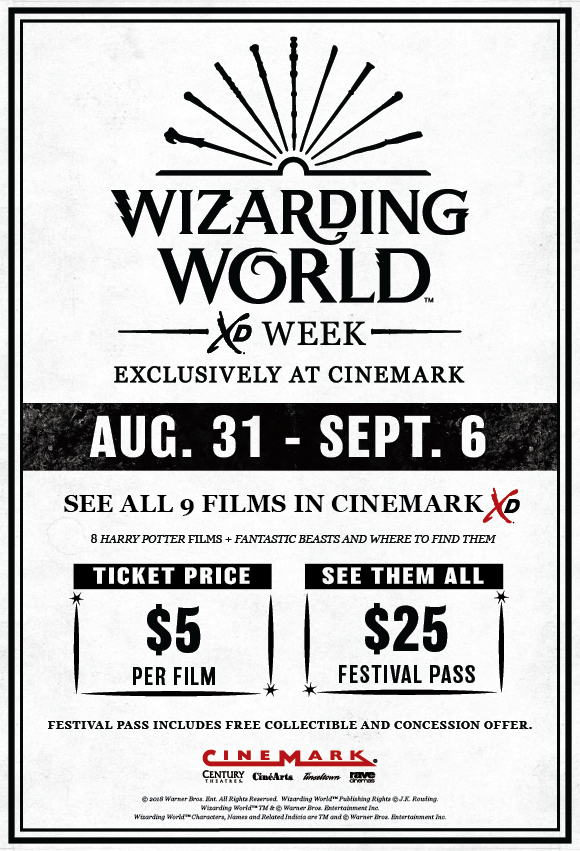 The festival pass includes more than just multiple hours of wizarding world movie magic – you also receive a collectible keychain, a commemorative festival badge, and a specially designed fillable collector’s cup. The cup can be refilled at Cinemark Theatres for just $3.50 for the remainder of 2018. There will also be a special Fantastic Beasts cup available for purchase that can be brought back and used again on November 16 before and during the premiere of Fantastic Beasts: The Crimes of Grindelwald. Participating Cinemark locations will also have exclusive wizarding world merchandise for sale.

Tickets for the Wizarding World XD Week go on sale August 3 on Cinemark’s website. Don’t forget to get your tickets early, because festival passes are limited!