Eddie Redmayne and Jude Law Head Back to Hogwarts

Yesterday, September 1, marked the yearly anniversary that wizarding students pack up their trunks, throw on their robes, grab their wands, and head back to Hogwarts. Potter fans gathered at Platform 9 3/4 at London’s King’s Cross station to celebrate Back to Hogwarts Day and were pleasantly surprised when Eddie Redmayne and Jude Law stepped out from behind the magical brick wall.

The actors of young(er) Dumbledore and his favorite Hufflepuff student lead the countdown to 11:00 a.m – the departure time of the Hogwarts Express. Harry Potter and Fantastic Beasts fans spent hours in line to try to snap a photo of themselves pushing a trolley “through” the brick wall at the platform. Redmayne and Law were there to offer their assistance with making those moments magical.

We will be returning to Hogwarts through the big screen this November with Fantastic Beasts: The Crimes of Grindelwald. Like many wizarding world fans, we are eagerly looking forward to it! Share with us how you celebrated Back to Hogwarts Day on our social media. 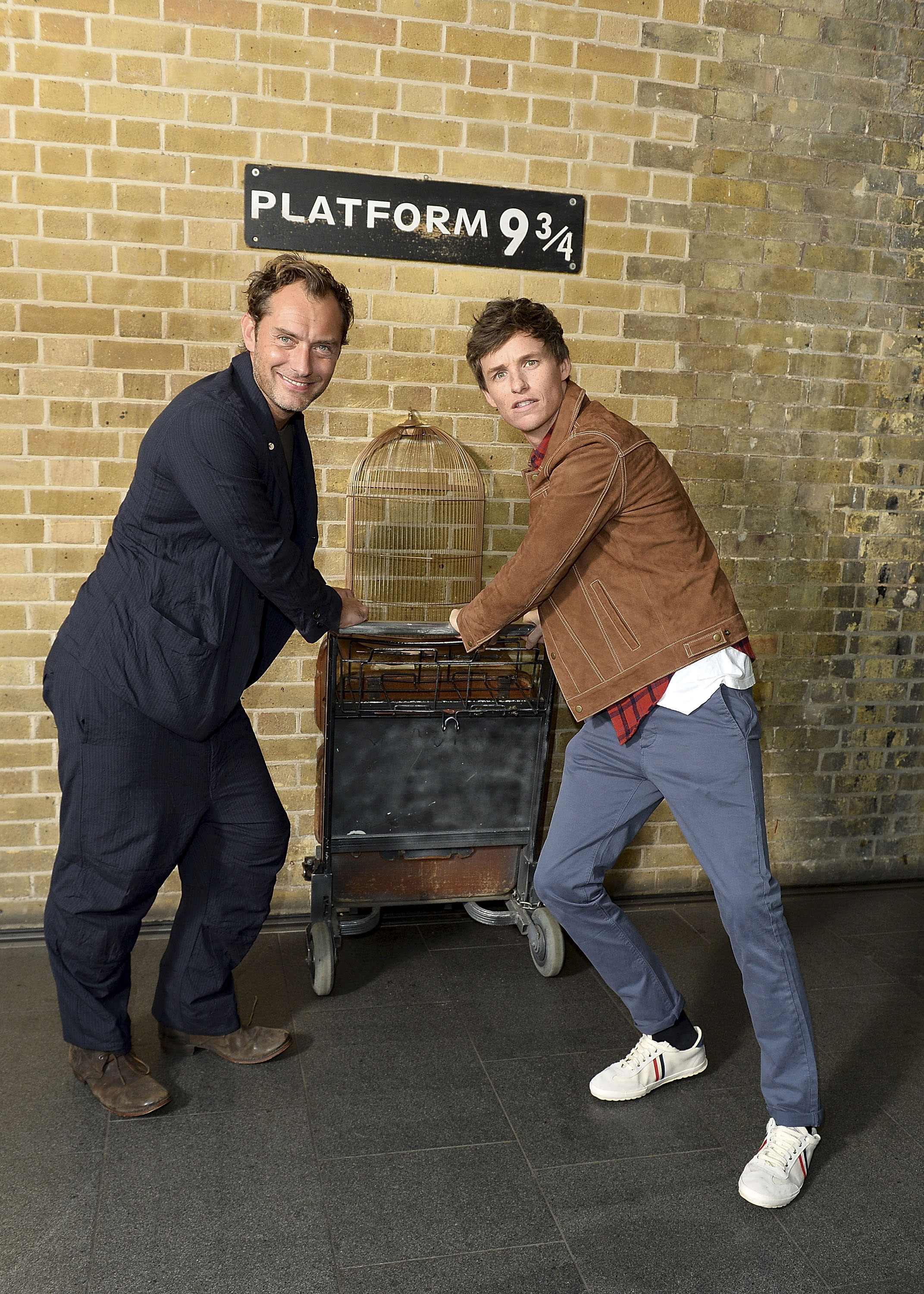 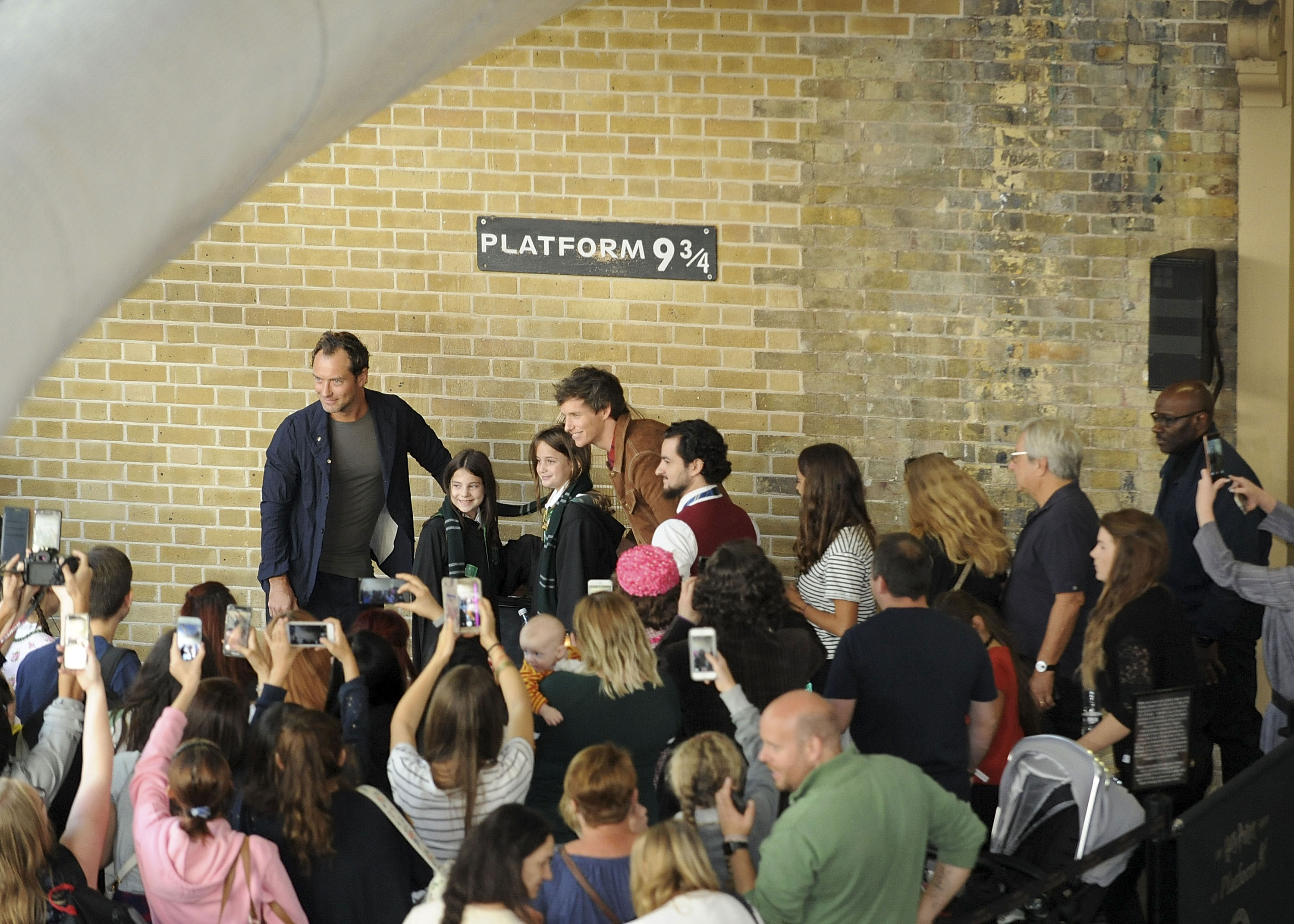 Law and Redmayne pose with two young fans celebrating Back to Hogwarts Day. 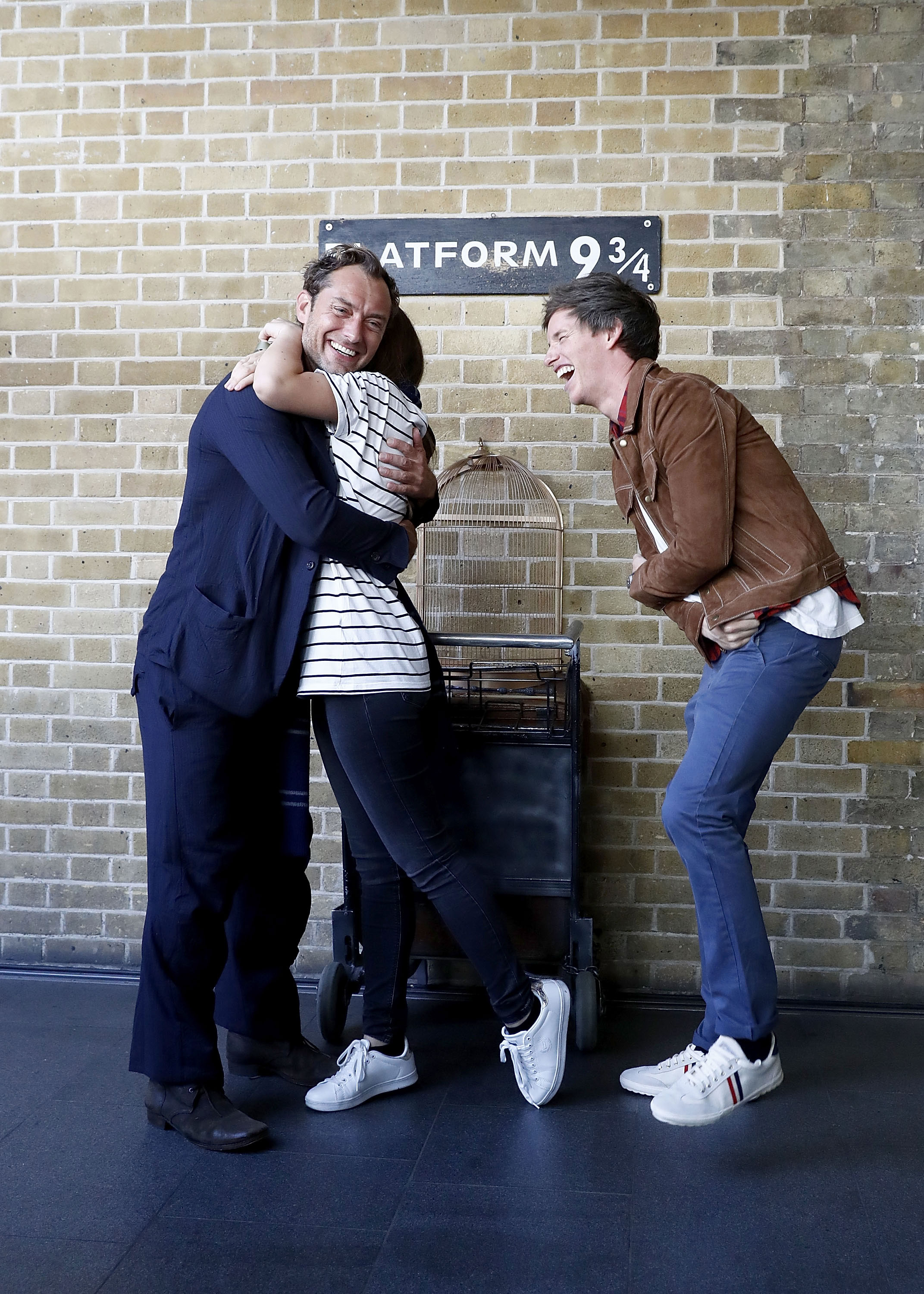 A lucky fan gives Law a hug as Redmayne laughs. 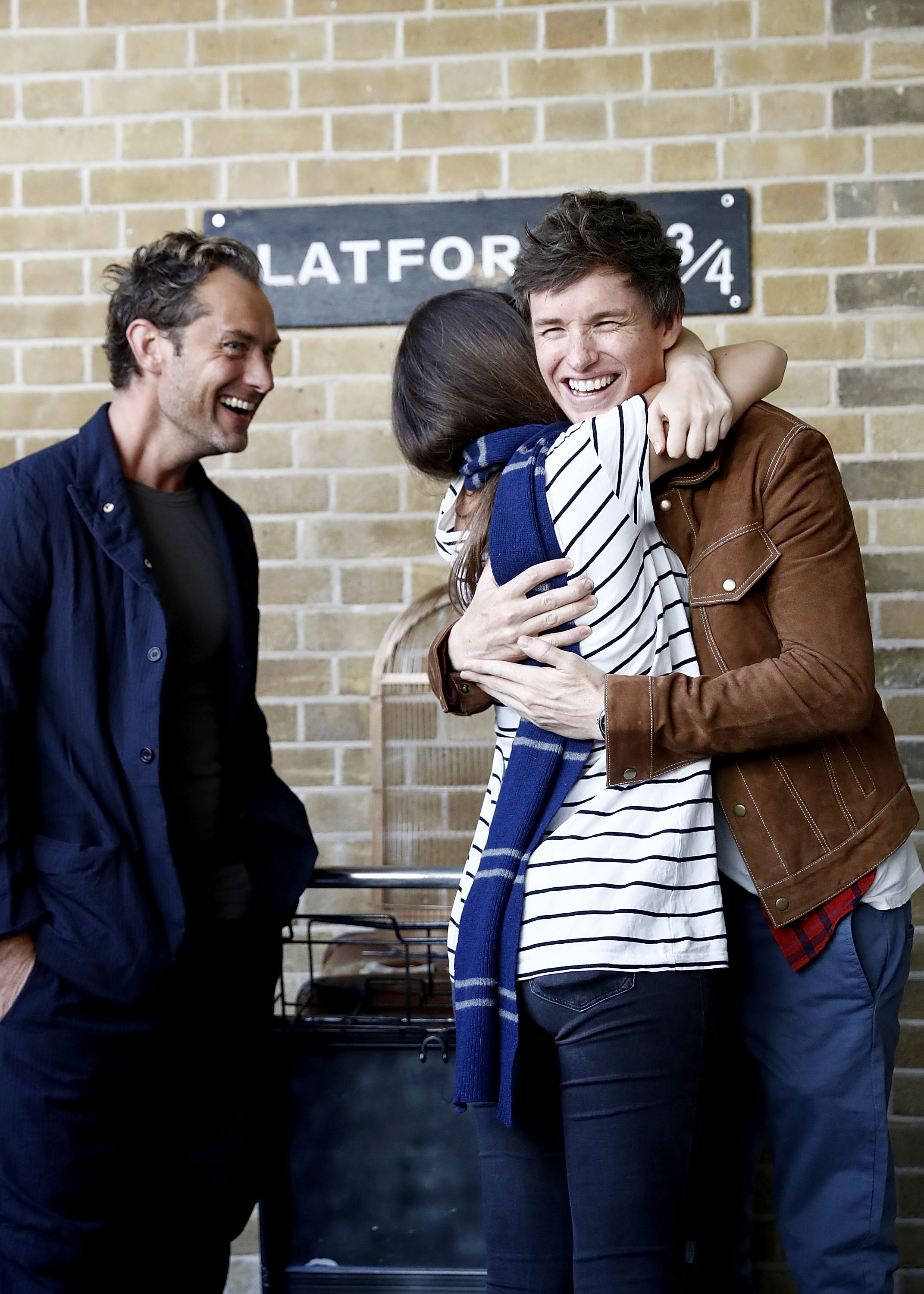 Redmayne’s turn to get a hug from a lucky fan 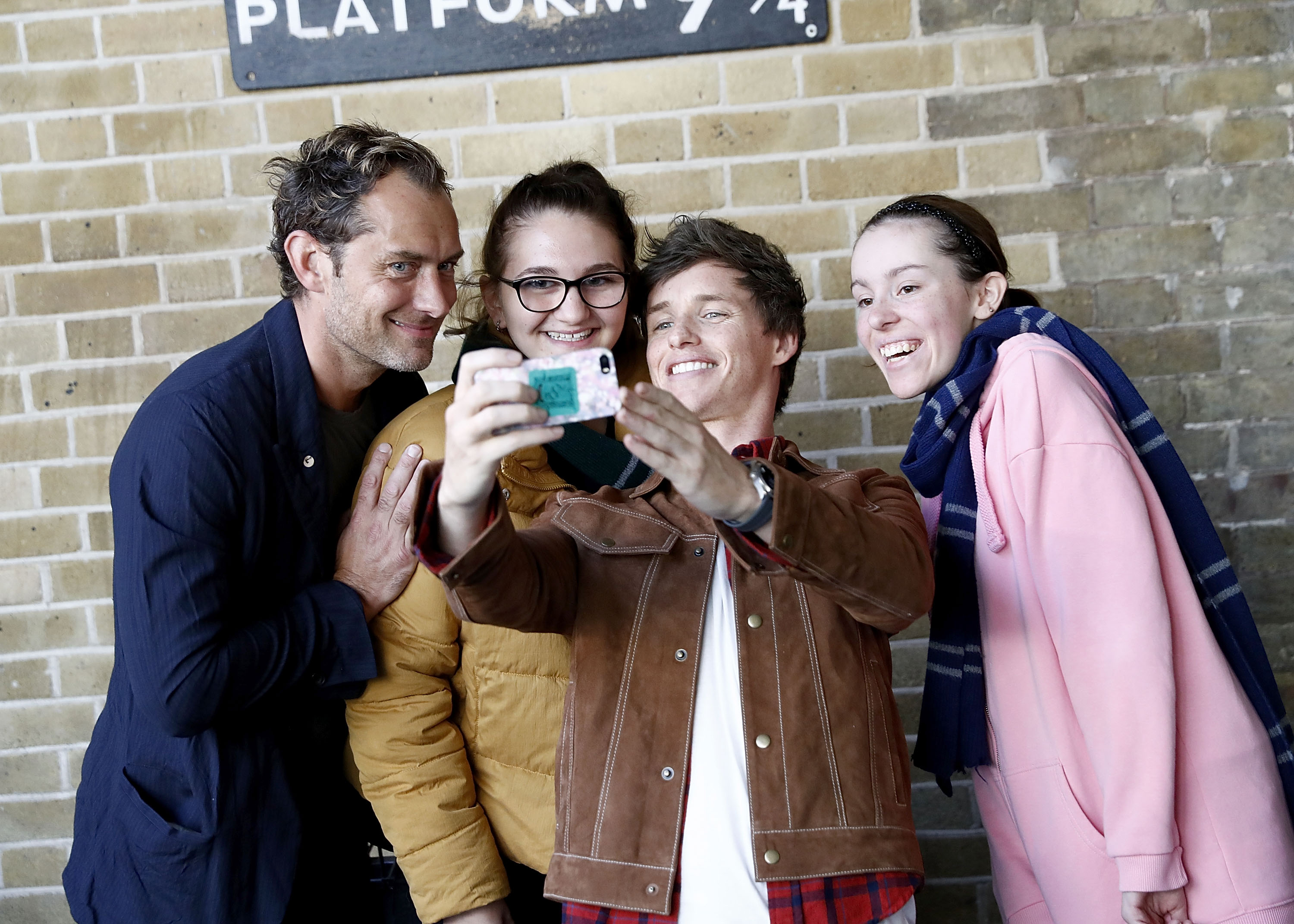 Redmayne snaps a selfie of Law and two select fans. 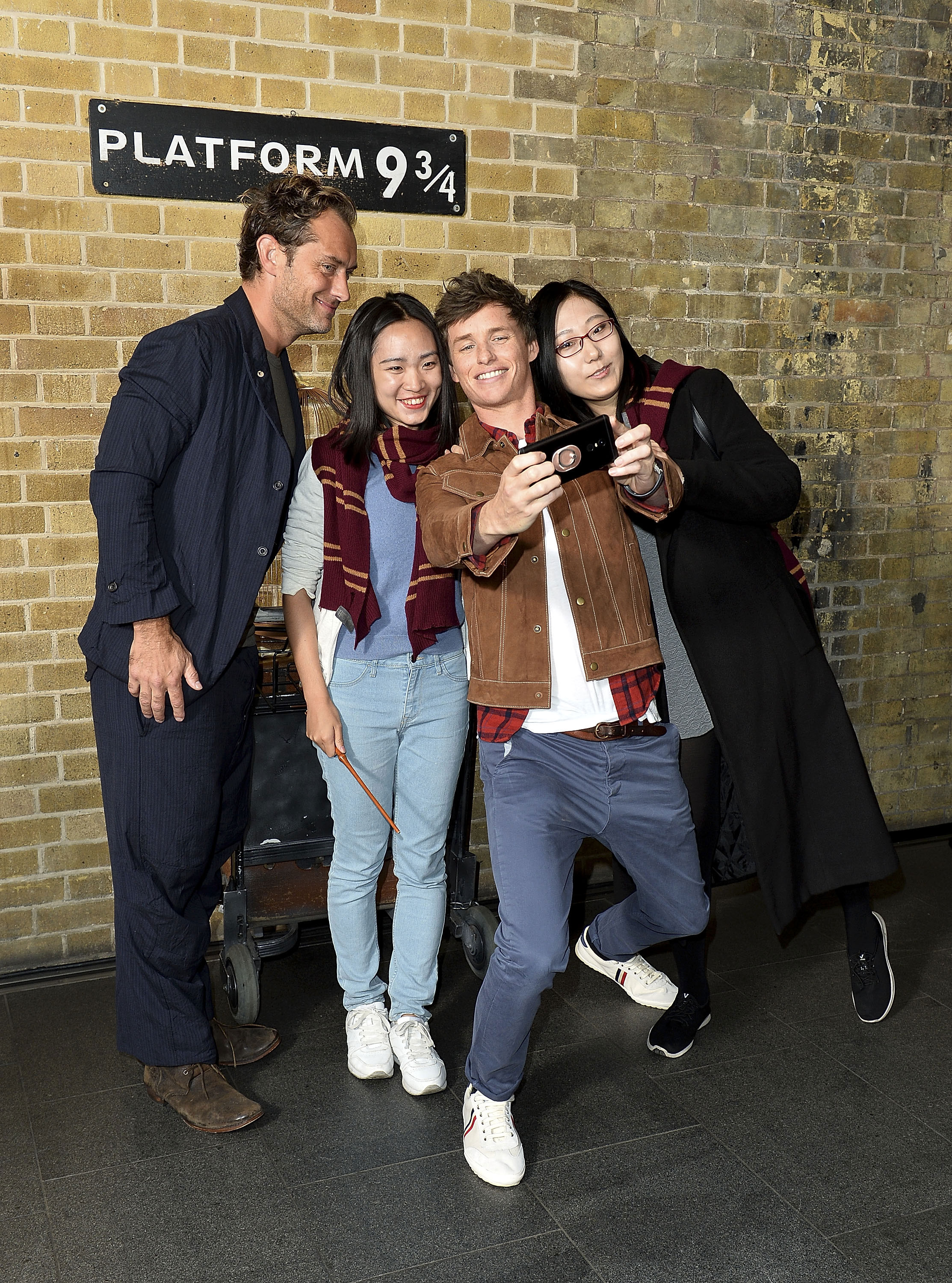 Redmayne holds the camera again, this time for a pair of Gryffindors. 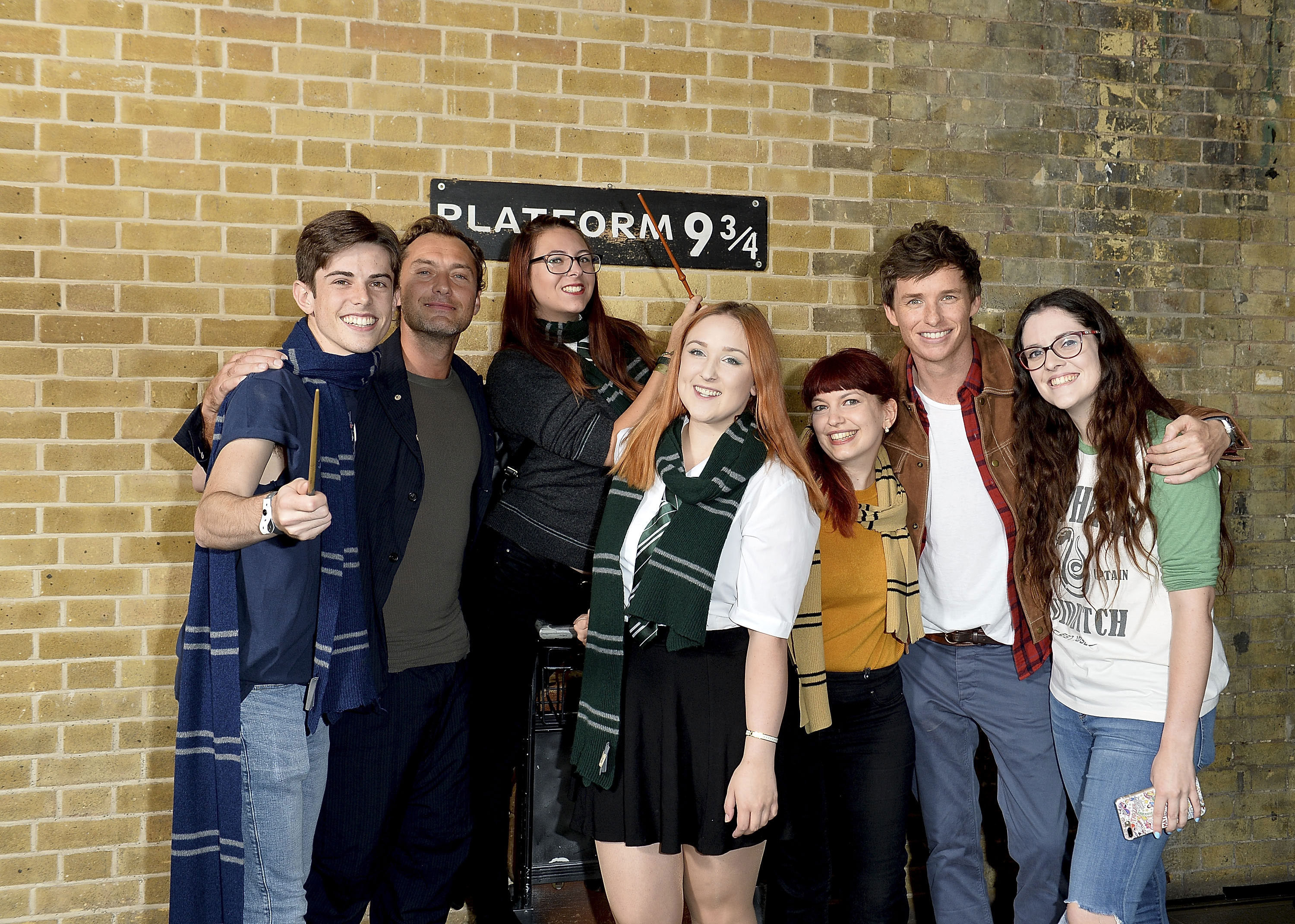 A group of fans from all the Houses poses with Law and Redmayne at Platform 9 3/4. 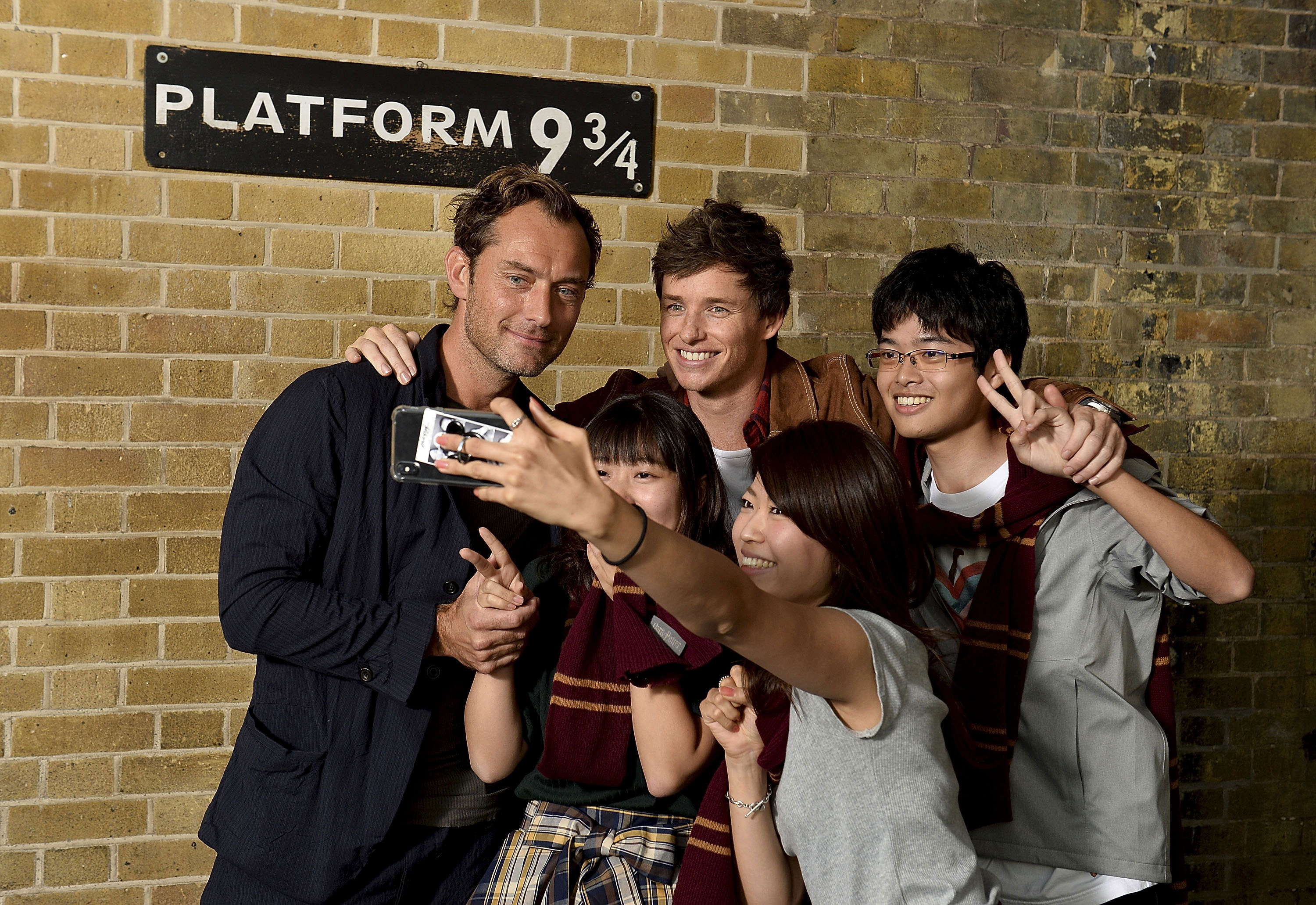 Redmayne is off the hook for this selfie as a group of Gryffindors snaps a photo. 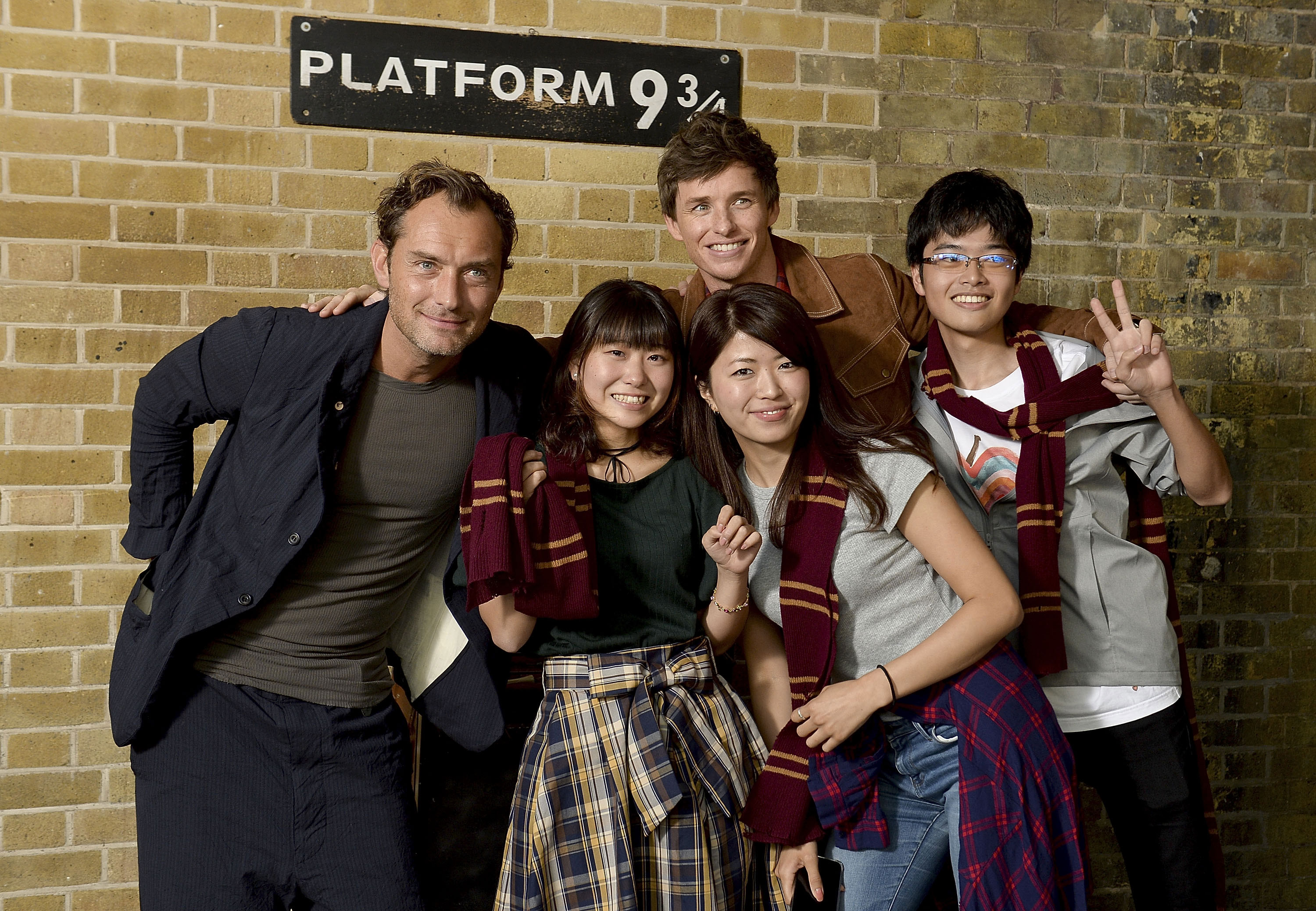 Law and Redmayne pose with the same group of Gryffindors for an official photo. 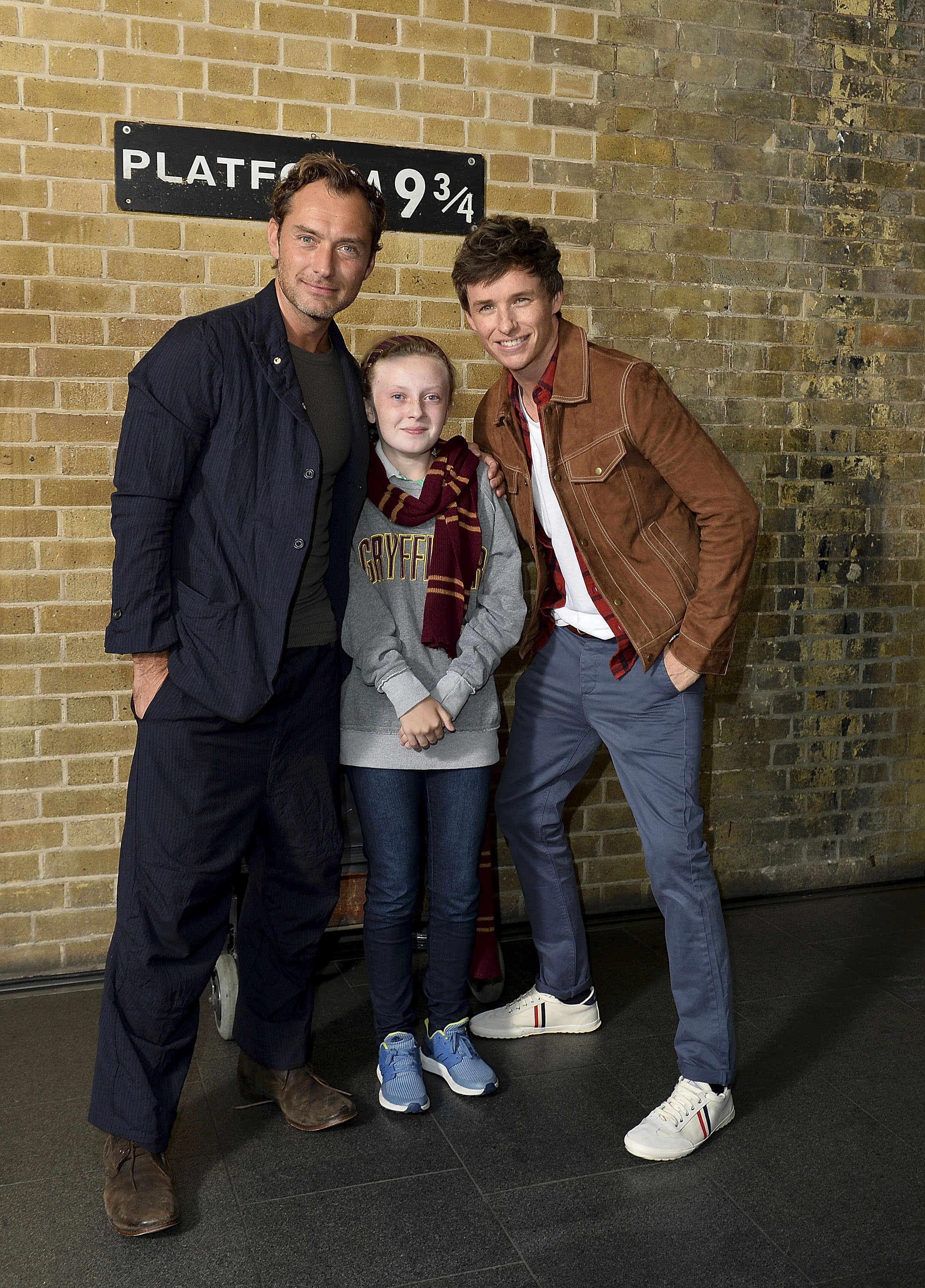 A lucky little Gryffindor gets her photo taken with Law and Redmayne at Platform 9 3/4. 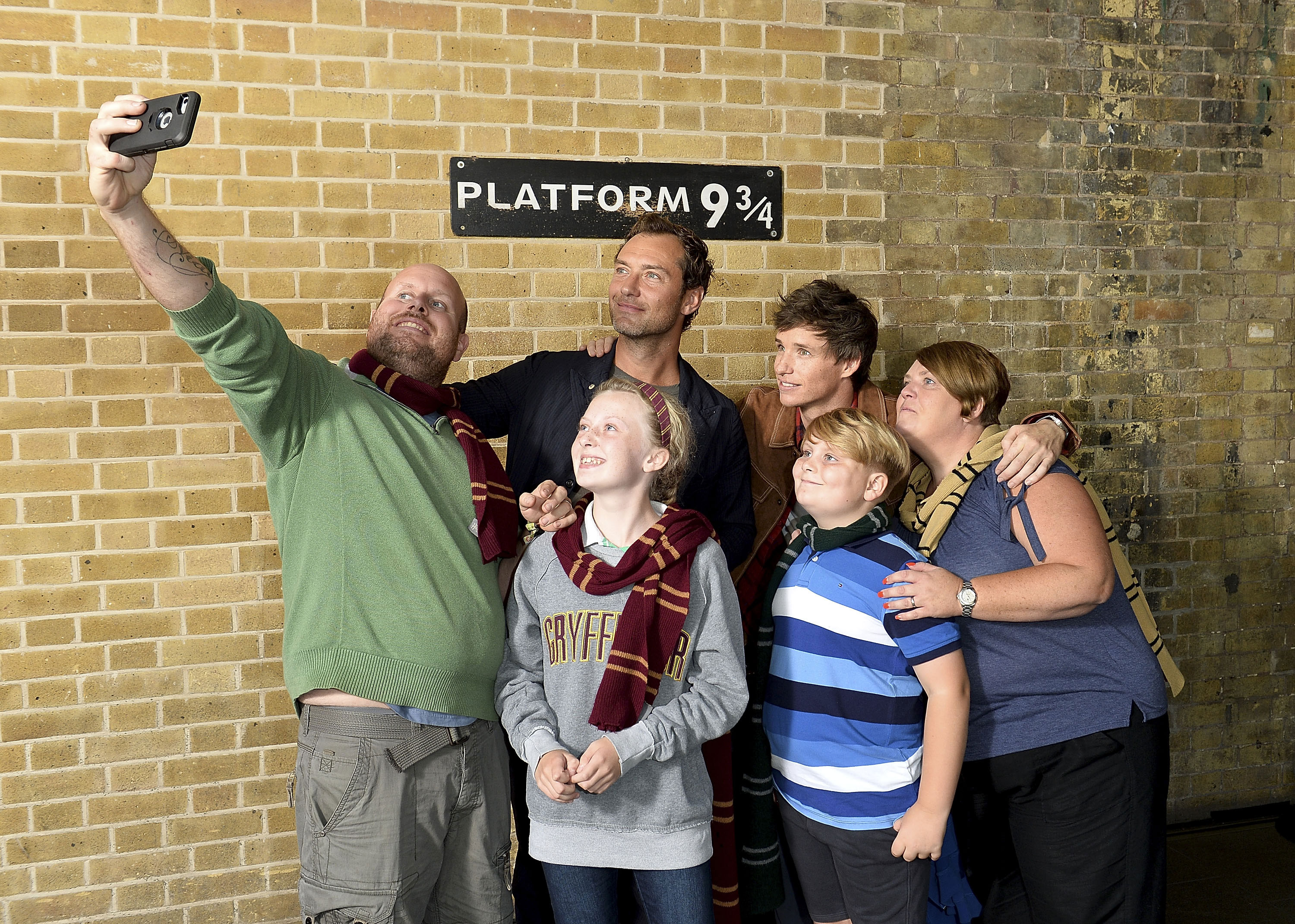 A family of fans – from three different Houses! – snaps a quick selfie with Law and Redmayne. 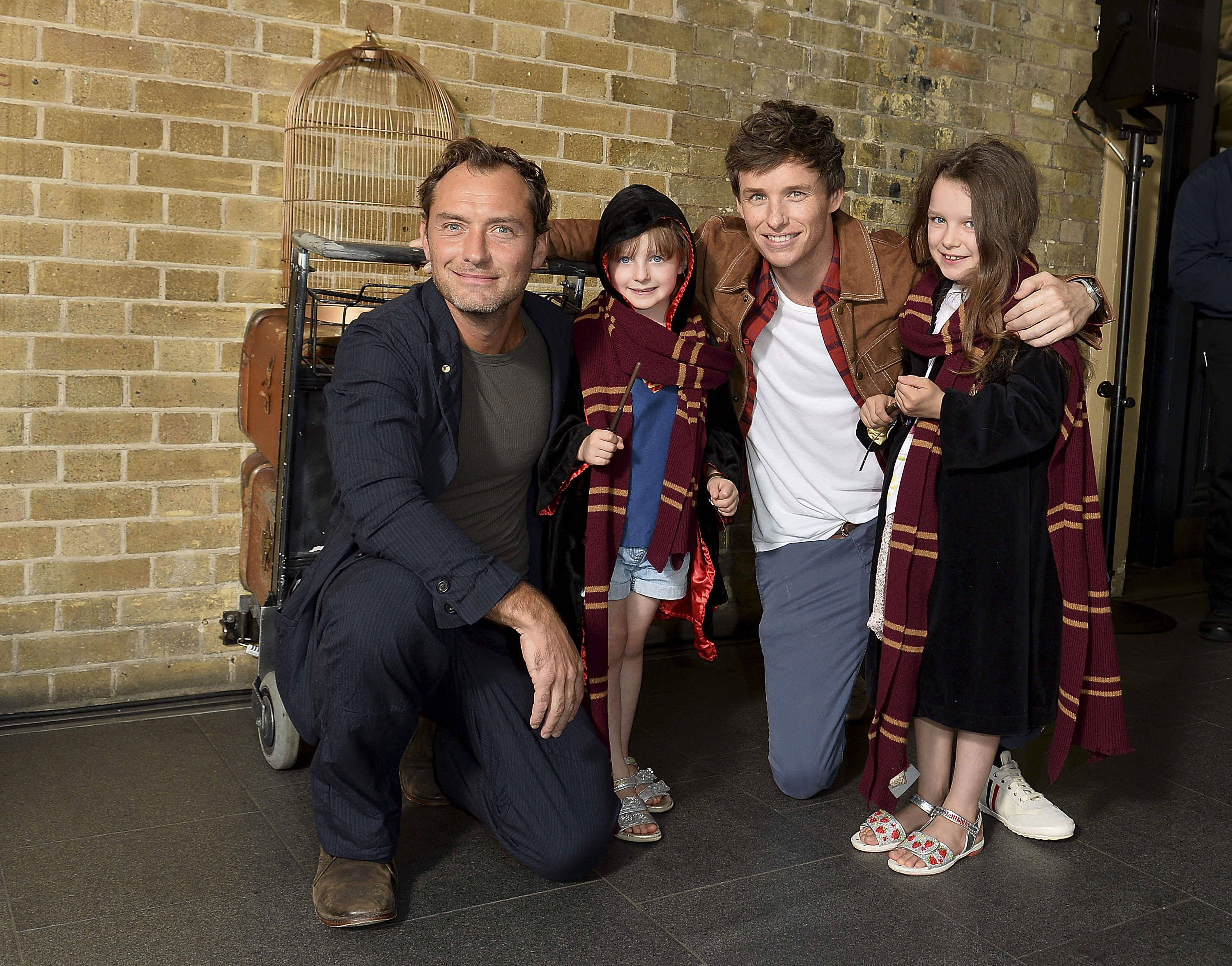 Two adorable young Gryffindors smile for a photo with Law and Redmayne in front of the trolley at Platform 9 3/4. 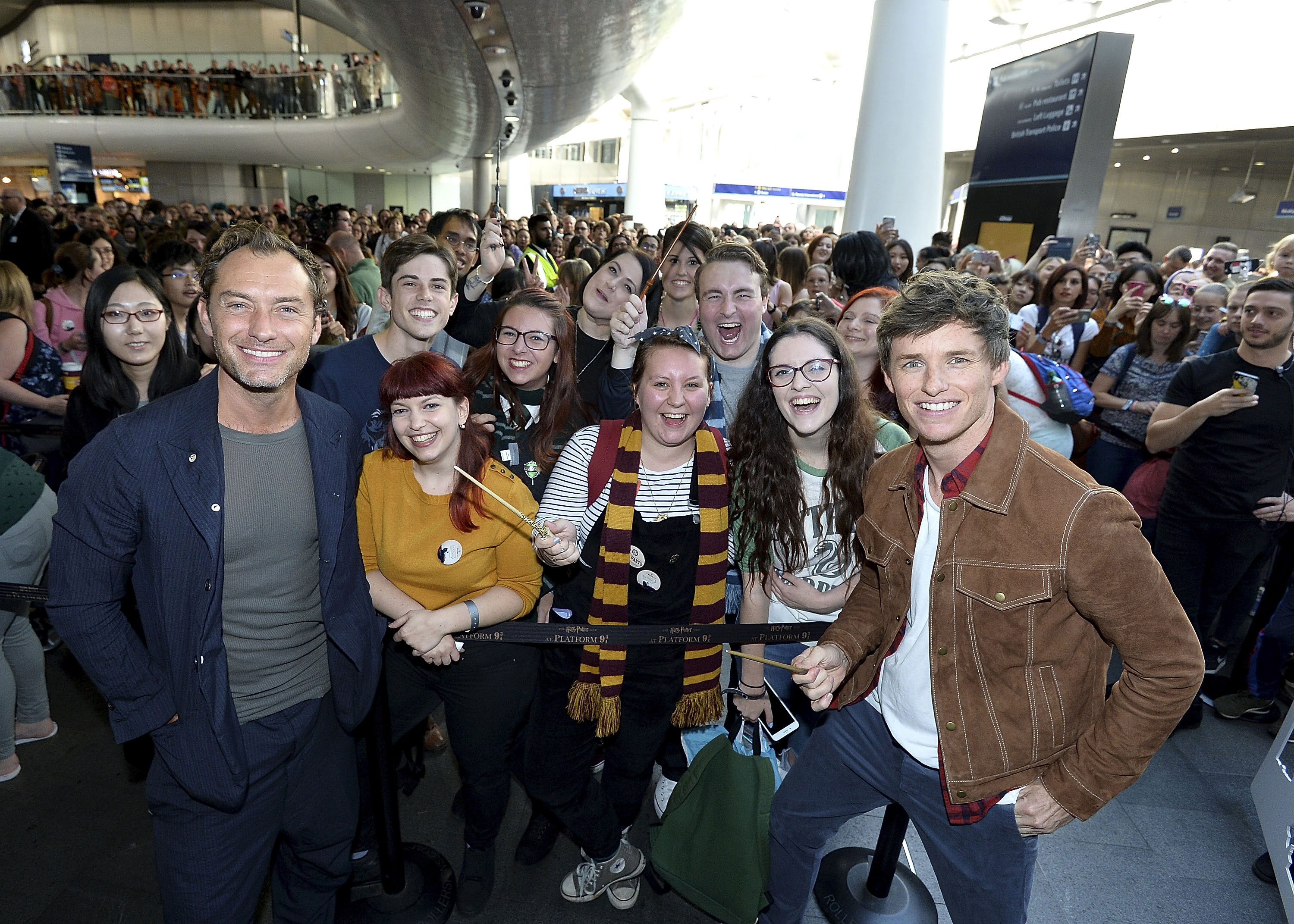 A crowd of fans smiles and cheers as they squeeze into a group photo. 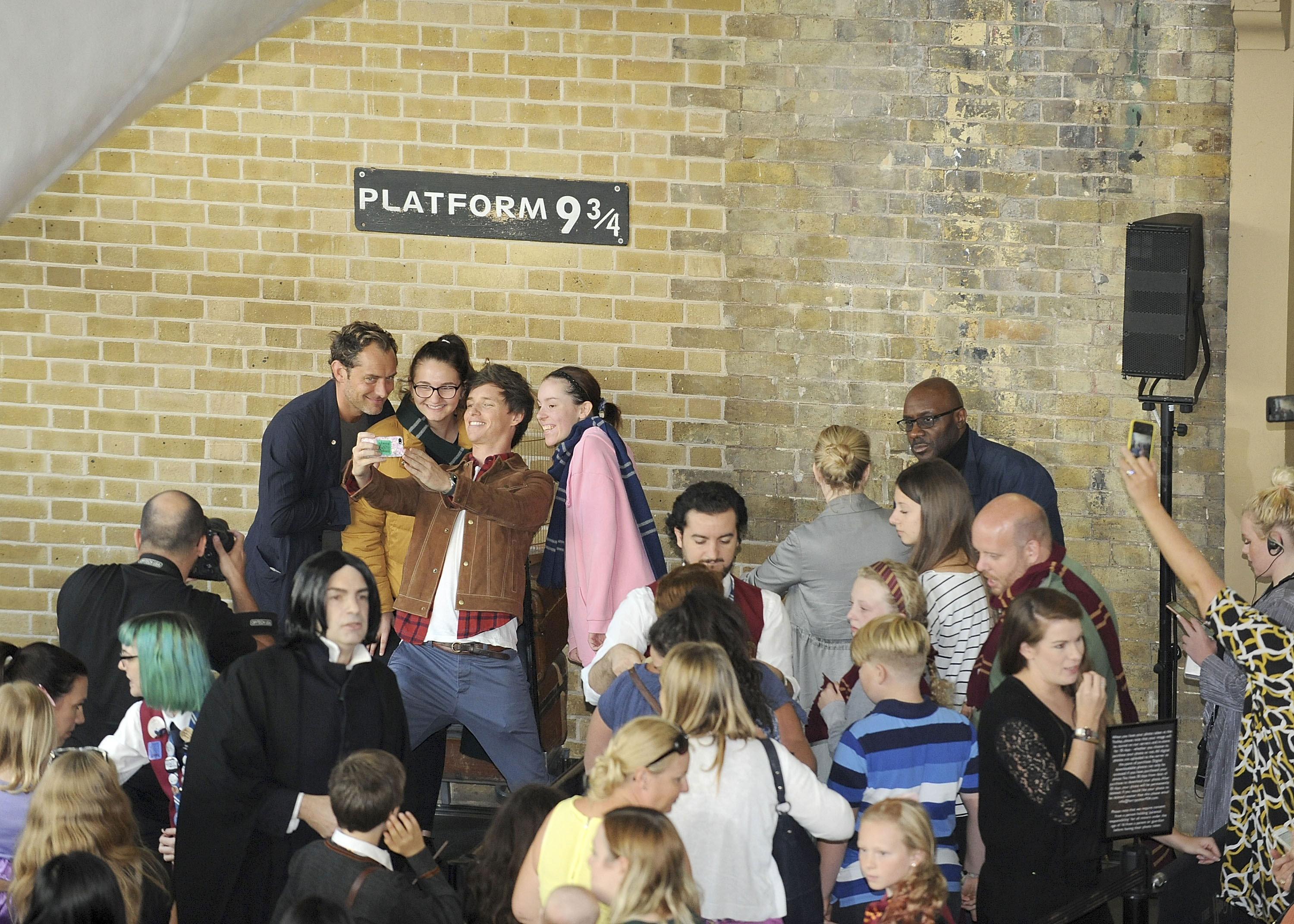 A photo of Redmayne taking a photo from afar 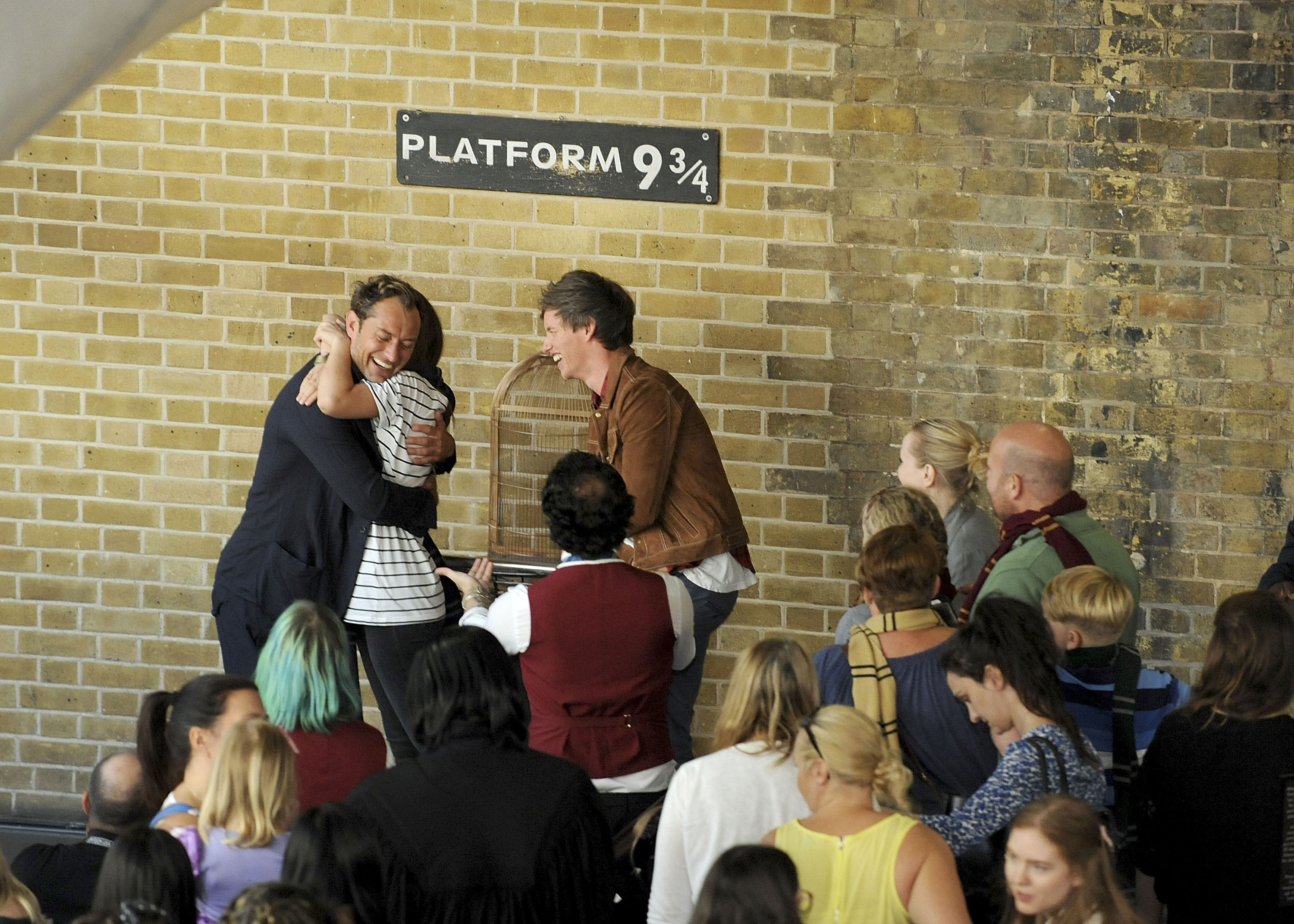 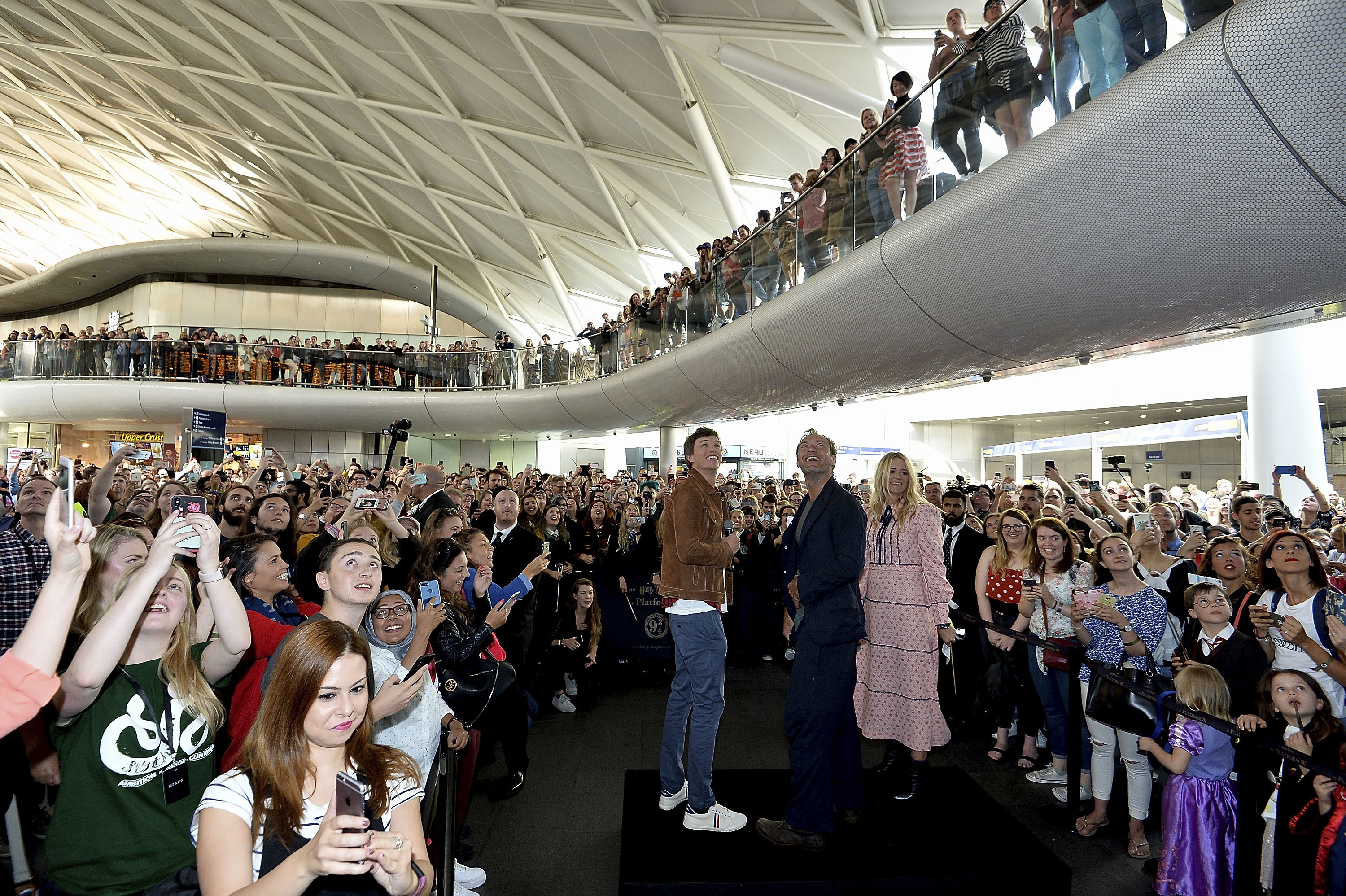 Law and Redmayne look in amazement at the crowd that has gathered to see them. 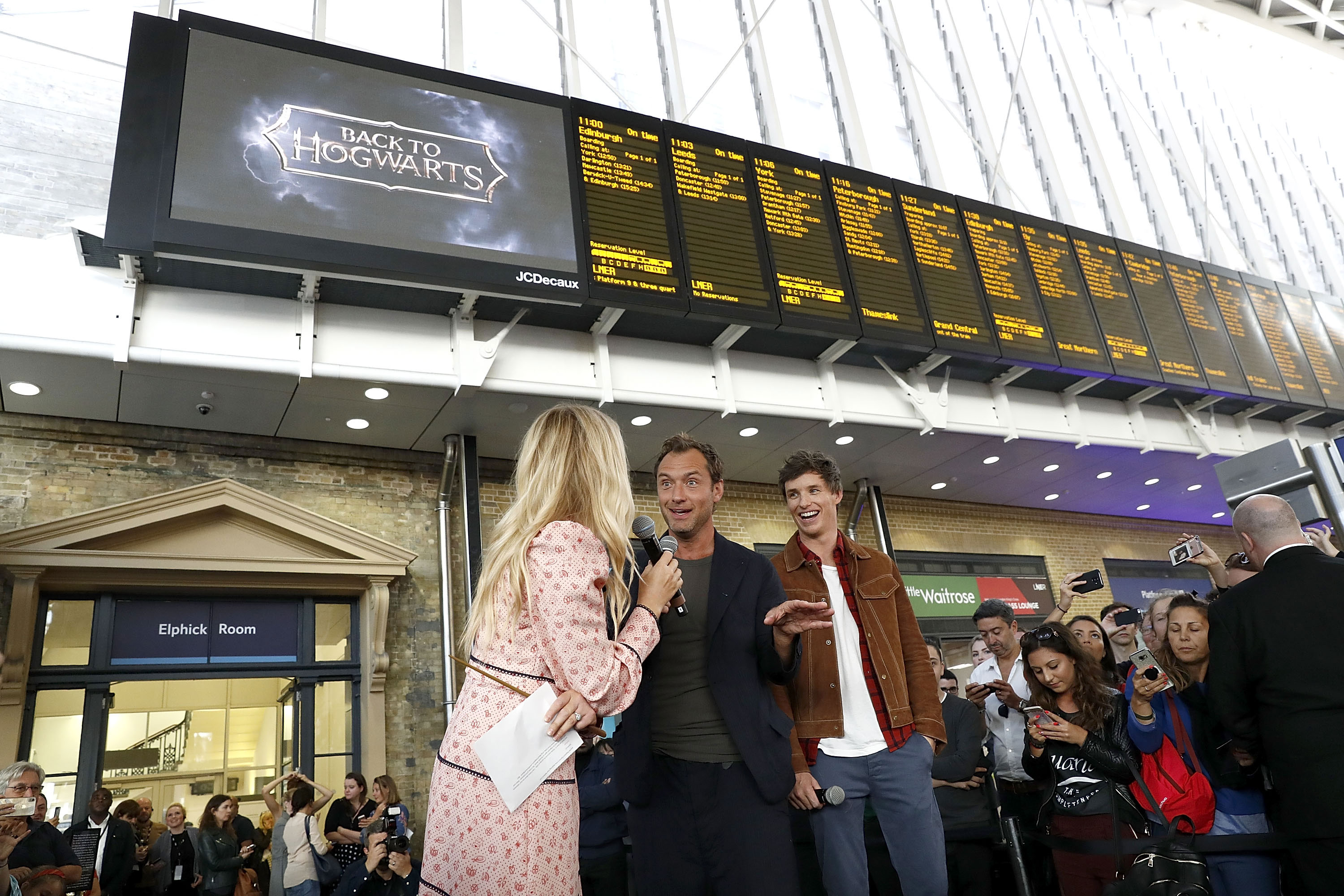 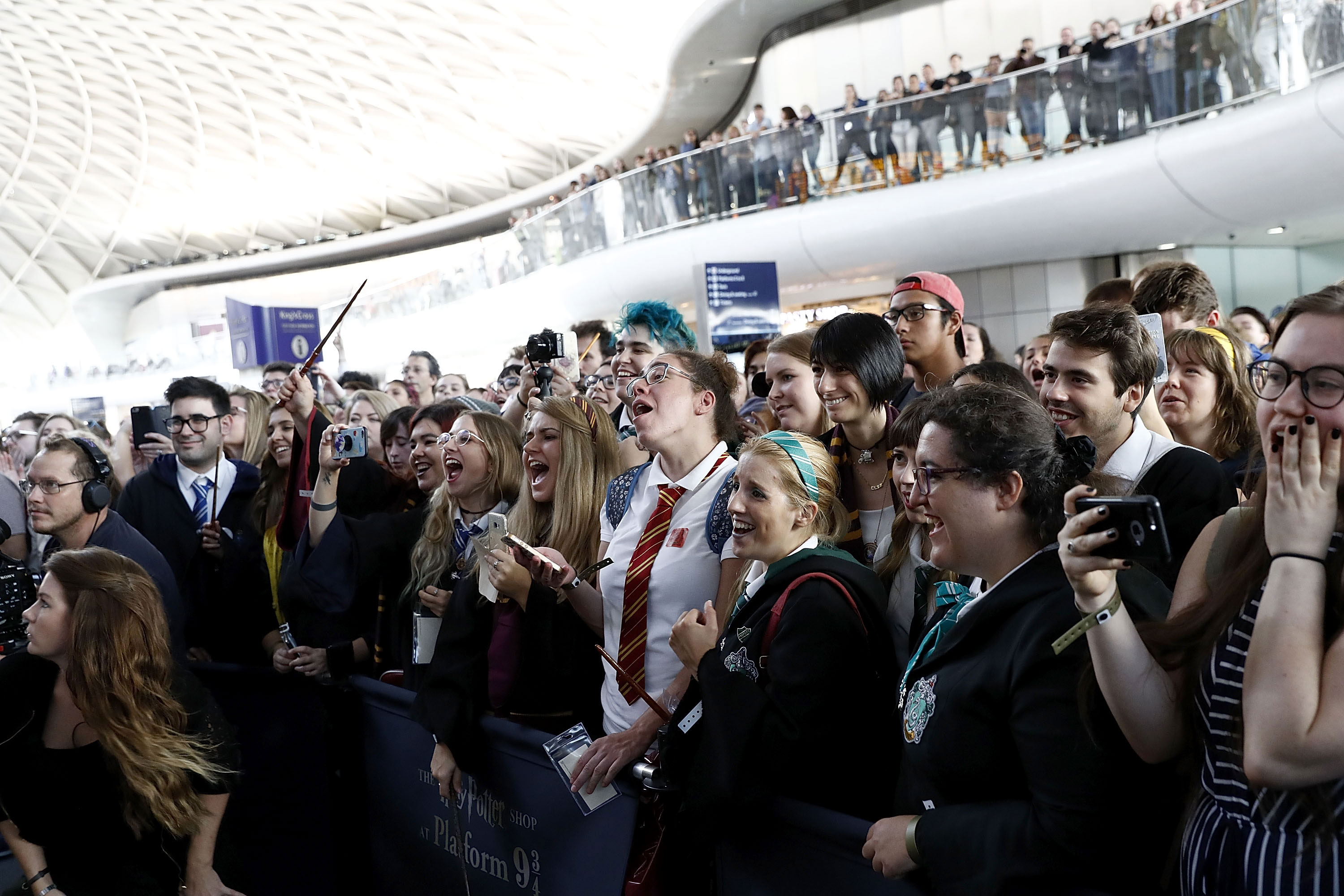 Fans are taken by surprise at the appearance of Law and Redmayne at Platform 9 3/4.
Press Release

EDDIE REDMAYNE AND JUDE LAW, STARS OF THE ALL-NEW WIZARDING WORLD ADVENTURE
FANTASTIC BEASTS: THE CRIMES OF GRINDELWALD,
SURPRISE FANS AT “BACK TO HOGWARTS” DAY CELEBRATION

LONDON, ENGLAND – September 1, 2018 – This morning, Wizarding World fans at King’s Cross railway station for “Back to Hogwarts” Day got the surprise of their lives when Eddie Redmayne and Jude Law, stars of the highly anticipated new big-screen adventure Fantastic Beasts: The Crimes of Grindelwald, apparated on Platform 9 ¾ to join the festivities and lead the countdown to the 11:00 AM departure of the Hogwarts Express.

The annual gathering is a big moment for the U.K.’s massive population of Harry Potter fans.  Each year on September 1st, they flock to King’s Cross by the thousands, often dressed as their favorite character from J.K. Rowling’s Wizarding World, to commemorate the day young wizards and witches from across the U.K. make their way to Platform 9 ¾ to board the iconic steamer that whisks them off to attend Hogwarts School of Witchcraft and Wizardry.

Fans lined up for hours at a popular photo point to get a shot of themselves pushing a luggage trolley “through” the brick wall to recreate Harry and others’ passage through the magical barrier and onto Platform 9 ¾, with staff on-hand to help with the finishing touches, such as their Hogwarts scarf.  But in the place of staff members, fans reached the front of the line to find none other than Redmayne and Law standing by to assist.

Following a lively round of photos, the two stars led the countdown to the 11:00 AM departure of the Hogwarts Express.

In the new film, Redmayne once again stars as Magizoologist Newt Scamander, with Law taking on the iconic role of Newt’s friend and one-time professor, Albus Dumbledore, decades before he becomes Headmaster at Hogwarts.

Fans can look forward to experiencing Hogwarts again when Fantastic Beasts: The Crimes of Grindelwald, the second of five all new adventures in the Wizarding World, comes to cinemas on 16 November, 2018, from Warner Bros. Pictures.

About Fantastic Beasts: The Crimes of Grindelwald

At the end of the first film, the powerful Dark wizard Gellert Grindelwald (Depp) was captured by MACUSA (Magical Congress of the United States of America), with the help of Newt Scamander (Redmayne). But, making good on his threat, Grindelwald escaped custody and has set about gathering followers, most unsuspecting of his true agenda: to raise pure-blood wizards up to rule over all non-magical beings. In an effort to thwart Grindelwald’s plans, Albus Dumbledore (Law) enlists his former student Newt Scamander, who agrees to help, unaware of the dangers that lie ahead. Lines are drawn as love and loyalty are tested, even among the truest friends and family, in an increasingly divided wizarding world.

Fantastic Beasts: The Crimes of Grindelwald was directed by David Yates, from a screenplay by J.K. Rowling. The film is produced by David Heyman, J.K. Rowling, Steve Kloves and Lionel Wigram. Tim Lewis, Neil Blair, Rick Senat and Danny Cohen served as executive producers. The film will be distributed worldwide in 2D and 3D in select theatres and IMAX by Warner Bros. Pictures.