Sending post by owl will probably never become a norm in the Muggle world, but an amazing alternative will soon be available, and it is going to make your mail look absolutely magical.

This October, in addition to some adorable Harry Potter costumes, British fans can also look forward to new Harry Potter stamps, the first to be released in almost five years, when the United States Postal Service produced a set in 2013 (seen below). The new set of Potter stamps will be released by Britain’s Royal Mail on October 16. These are no ordinary stamps – they have secret details that require the touch of a wizard to uncover. Each stamp will include hidden details that will only be revealed when it is placed under ultraviolet light. On top of these hidden details, the style of the “1” that depicts the value on every stamp will mirror the font used for the films, which also transforms the length of the number into a lightning bolt.

Fifteen stamps will be released, featuring a few of your favorite characters from the story:

A few surprise characters like Pomona Sprout and Professor Trelawney are also featured. That’s not all; modes of transportation from the films will also make an appearance, like Hagrid’s enchanted motorcycle, the Flying Ford Anglia, and the Knight Bus. The magic does not stop here – in the corner of the main characters’ stamps, you will find fun little details that reflect some of their most significant moments in the books. For instance, Harry’s stamp has a small Golden Snitch in the corner while Hermione’s has a Time-Turner. Ron’s has a gigantic chess piece and Neville’s has the sword of Godric Gryffindor. The other characters that are featured, like Severus Snape, are set against a backdrop of the Marauder’s Map, complete with fading footsteps.

Philip Parker of Royal Mail expressed his excitement over the new stamps:

The Harry Potter movies continue to thrill and delight audiences of all ages. The goal with our stamps is to capture the excitement of the [w]izarding [w]orld and the heroism of the students of Hogwarts School of Witchcraft and Wizardry.

This certainly provides one with more than enough reason to start writing letters again, so flex your writing hand, break out your quill, and go get your magical stamps. They are available for preorder right now and will be in post offices starting October 16. The stamps will be available in different packages, ranging from a set of ten special stamps to a prestige stamp book.

Check out some of the stamps below! 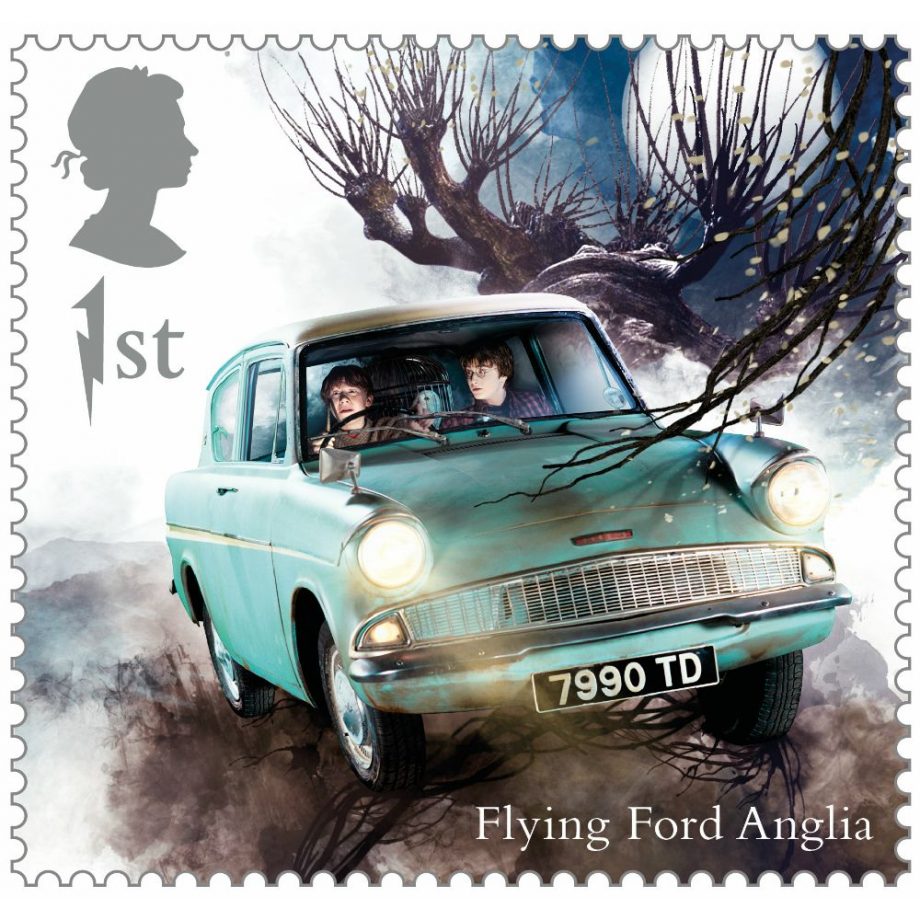 The Flying Ford Anglia is also featured, complete with Ron and Harry inside as they arrive for their second year at Hogwarts. Watch out for that tree! 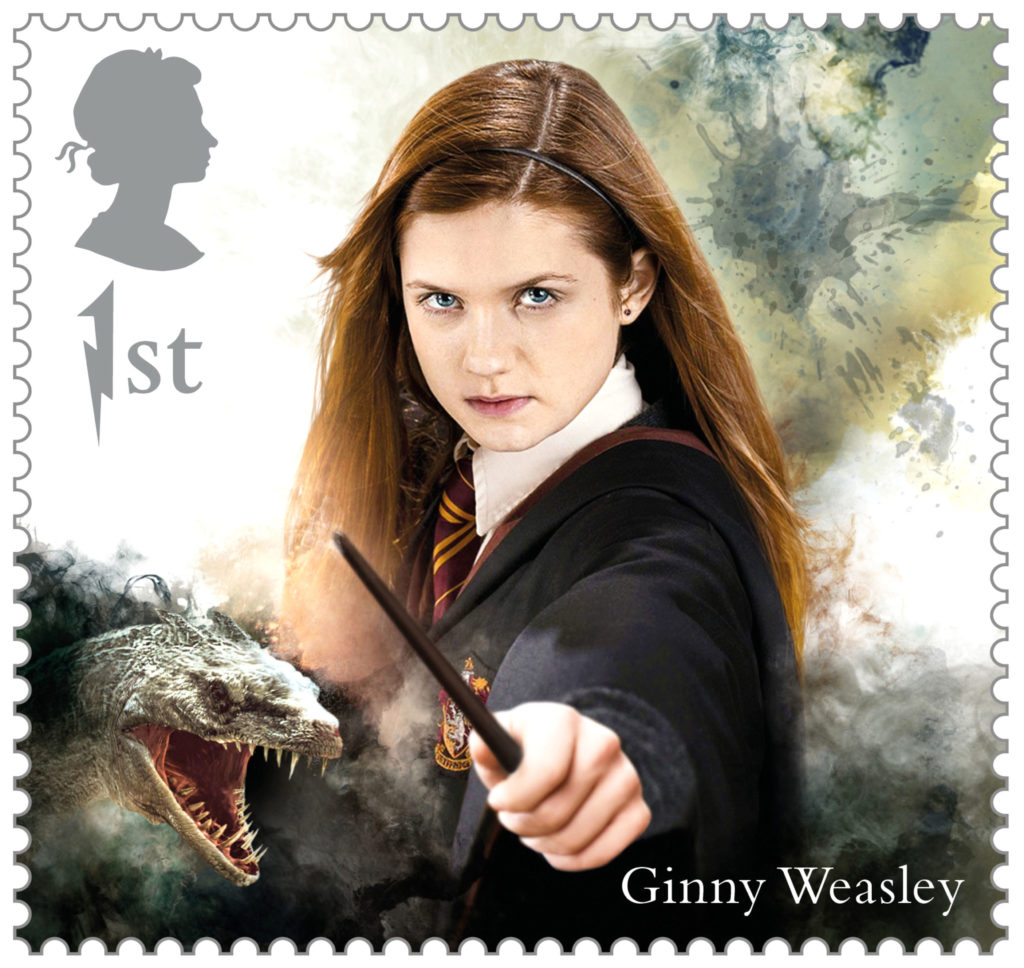 Ginny Weasley, the youngest member of the Weasley family and the love of Harry’s life, is also featured. 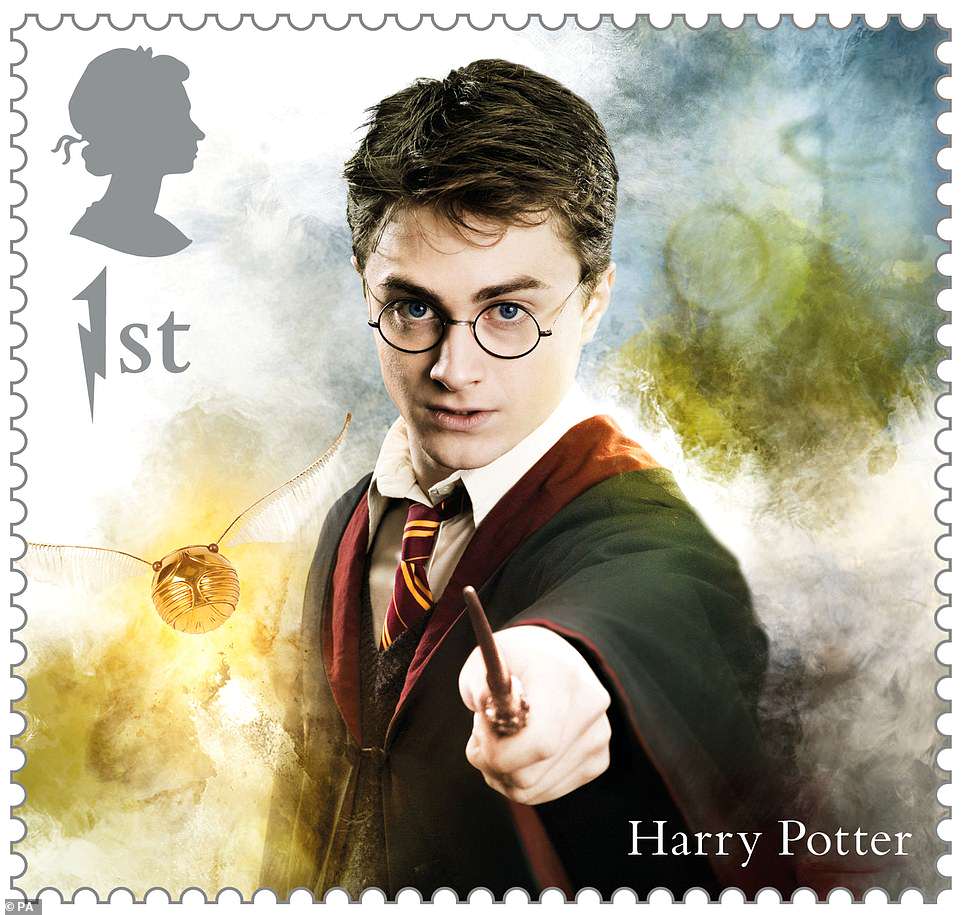 Harry is featured with the Golden Snitch. Who could ever forget that moment when he half swallowed it in his first Quidditch match? 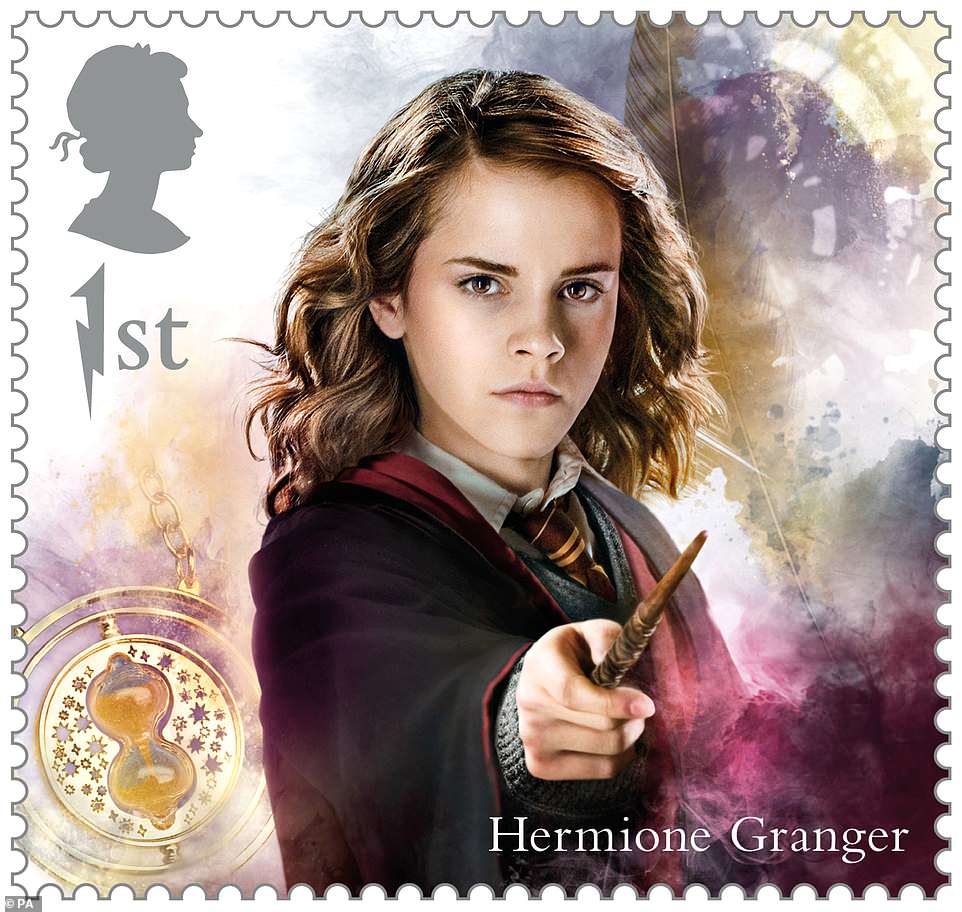 Hermione is featured with the infamous Time-Turner. At least we could see her punch Draco in the face a second time. 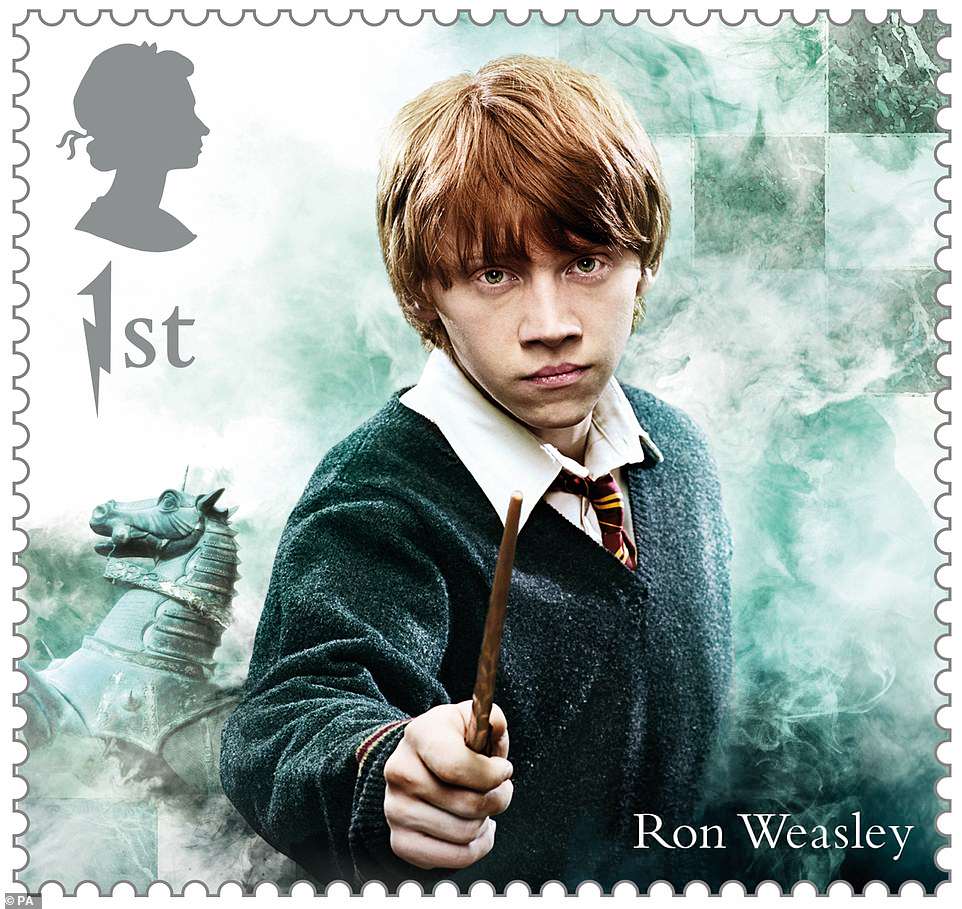 Ron is featured with a giant chess piece, representing the moment in “Sorcerer’s Stone” where he sacrificed himself so Harry could find the Stone. 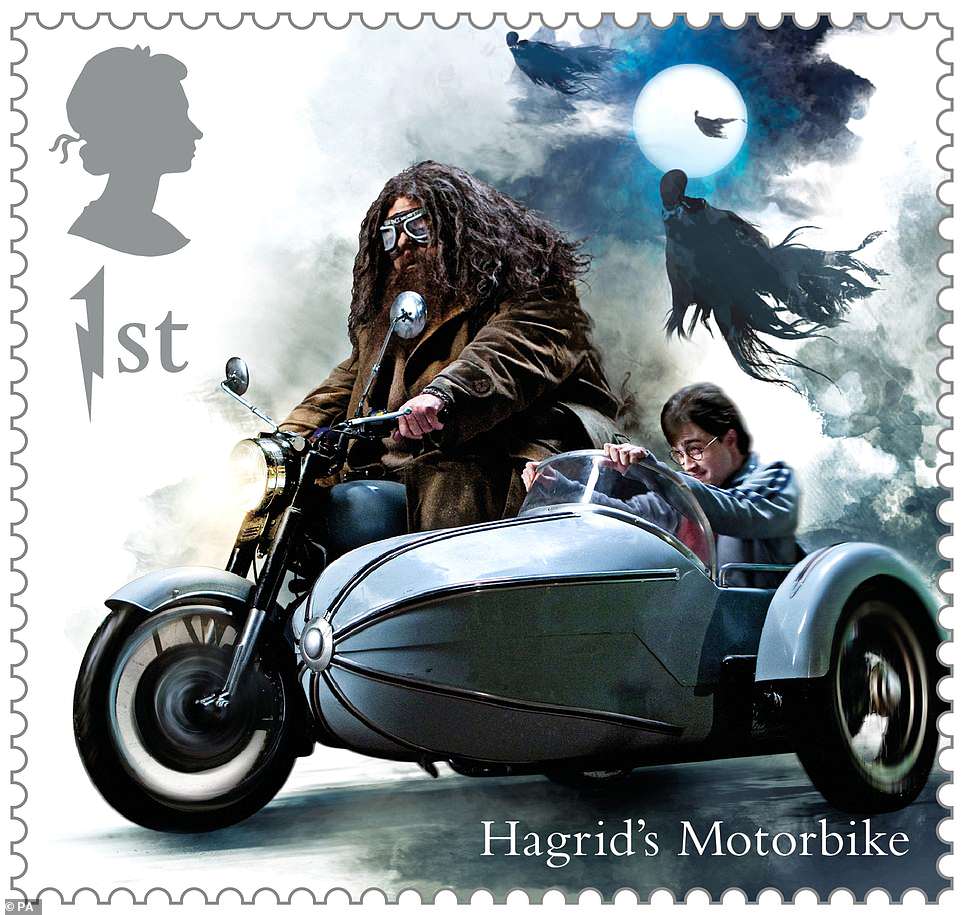 Stamps will also feature Hagrid’s enchanted motorcycle. It would be wise not to try kidnapping Harry from the sidecar; this motorcycle can literally spit fire! 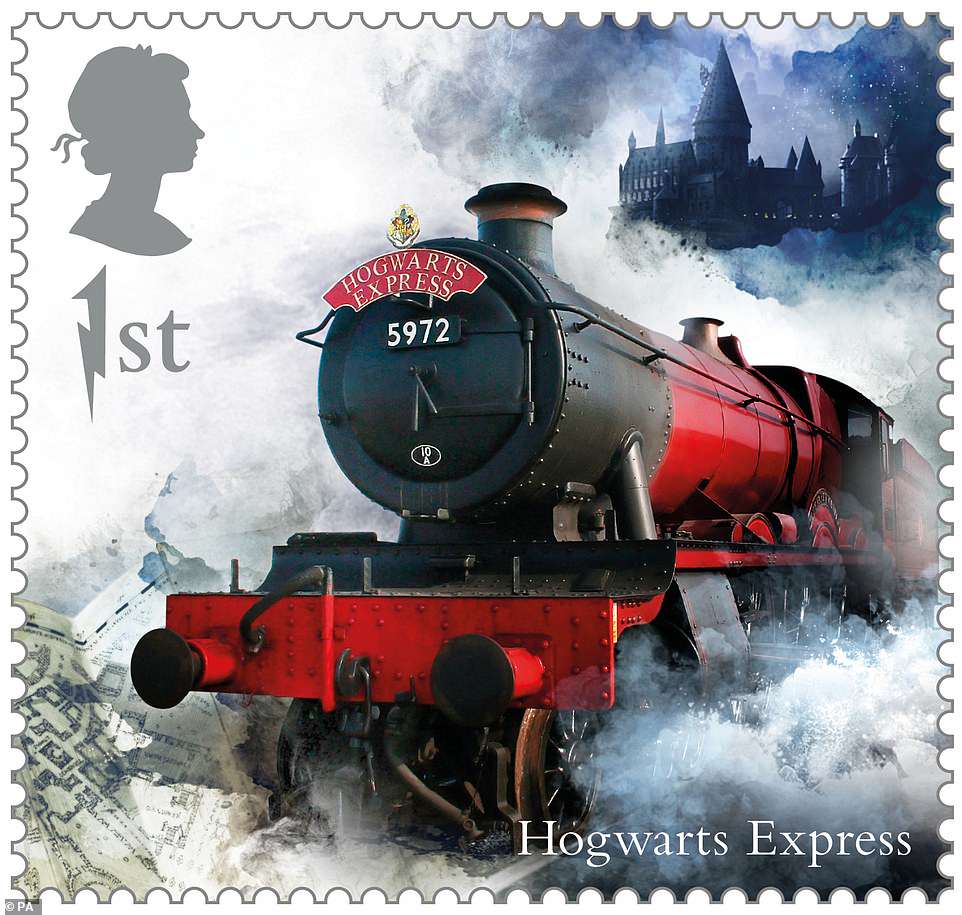 Decorate your letter with the Hogwarts Express to celebrate that back-to-Hogwarts feeling.
Press Release

A set of 15 Special Stamps will be issued to celebrate the series of eight Harry Potter films.

• Also shown are iconic modes of transport from the films: the Hogwarts Express; Hagrid’s enchanted motorbike; the flying Ford Anglia and the Knight Bus

• The Triwizard Cup also makes an appearance on a stamp

• Five of the stamps are presented in a Miniature-Sheet and depict professors: Pomona Sprout; Remus Lupin; Horace Slughorn; Sybill Trelawney and Severus Snape set against a background of the Marauder’s Map

• The critically acclaimed Harry Potter films have attracted huge audiences worldwide, with eight films being released between 2001 and 2011

• The stamps and souvenir products can be pre-ordered now from shop.royalmail.com and go on general sale from 7,000 Post Offices nationwide from 16 October 2018 Royal Mail in partnership with Warner Bros.

Consumer Products is to celebrate the Harry Potter film series with the release of 15 special Stamps.

The Harry Potter series remains to be one of the most beloved and enduring franchises with fans worldwide. The new stamps feature some of the most iconic characters from the films, including Harry; Hermione; Ron; Ginny Weasley and Neville Longbottom.

Also appearing in the set are some of the most iconic modes of transport used in the films; the Hogwarts Express; the enchanted motor bike [sic] ridden by Hagrid; the flying Ford Anglia and the Knight Bus.

Five Hogwarts professors are featured on further stamps presented in a Special Miniature Sheet: Pomona Sprout; Remus Lupin; Horace Slughorn; Sybil Trelawney and Severus Snape. They appear against a background of the Marauder’s Map – the magical parchment that reveals the current location of anyone on Hogwarts grounds.

To provide a little extra magic and intrigue to all 15 stamps, there are secret details that can only be revealed under ultraviolet light. In addition, the style of the ‘1‘ depicting the value on each of the stamps, mirrors the iconic font used for the films.

Philip Parker, Royal Mail, said: “The Harry Potter movies continue to thrill and delight audiences of all ages. The goal with our stamps is to capture the excitement of the Wizarding World and the heroism of the students of Hogwarts School of Witchcraft and Wizardry.”

Hermione is considered by many at Hogwarts to be the brightest witch of her age. On her many adventures with Harry and Ron, it is often thanks to Hermione’s educated mind, grasp of logic and quick thinking that the trio triumphs. Also featured is a Time[-]Turner.

The Hogwarts Express train is used by students of Hogwarts School of Witchcraft and Wizardry. The steam train runs between King’s Cross station in London and the village of Hogsmeade, from where the children reach Hogwarts by boat or Thestral-drawn carriage. Access to the train by wizards and witches can only be gained by passing through a brick wall at Platform Nine and Three-Quarters at King’s Cross Station.

On his 11th birthday, Harry Potter learns that he has been accepted to Hogwarts School of Witchcraft and Wizardry. Harry and his friends, Ron and Hermione, brave the challenges of school life while facing the increasing threat of the dark forces led by Lord Voldemort. As Voldemort returns to power, Harry realises that only he can stop the Dark Lord. Also featured is the Golden Snitch from the game of Quidditch.

In Harry Potter and the Chamber of Secrets, the Weasley twins, Fred and George and their younger brother Ron ‘borrow’ their fathers [sic] enchanted car to rescue Harry through his bedroom window in the Dursleys’ house. Later on, having missed the Hogwarts Express, Harry and Ron take the car on an exciting journey to Hogwarts.

From the moment they meet on the Hogwarts Express, Ron becomes Harry’s best friend. Ron supports Harry on all of his adventures – including a few times at the wheel of the Flying Ford Anglia – even when it means facing his worst fear: spiders.

Riding a flying motorbike, Hagrid and Harry endure a hazardous journey while being pursued by Lord Voldemort and several Death Eaters in Harry Potter and the Deathly Hallows – Part 1.

The youngest and only daughter in the Weasley clan, Ginny spends much of her first year at Hogwarts writing in Tom Riddle’s diary and unknowingly doing the Dark Lord’s bidding. In her fourth year, Ginny joins Dumbledore’s Army and eventually makes her feelings for Harry known. Also featured is Nagini, the snake of Lord Voldemort

Neville Longbottom is known as a good-natured but accident-prone boy with an aptitude for Herbology. As the Dark Lord rises to power, Neville bravely joins Dumbledore’s Army and ultimately plays an integral role in the destruction of Lord Voldemort. Also featured is Godric Gryffindor’s sword.

Described by its conductor as “Emergency transport for the stranded witch or wizard”, the Knight Bus appears in Harry Potter and the Prisoner of Azkaban. It collects Harry and his trunk from the side of the road after he flees Privet Drive following an altercation with Mr. Dursley’s sister.

The new Potions Master during Harry’s sixth year at Hogwarts, Horace Slughorn possesses a crucial memory – one which Harry must access in order to learn the secret of finishing Lord Voldemort.

Divination professor at Hogwarts who has prophesied accurately at least twice.

Remus Lupin is the Defense Against the Dark Arts professor during Harry’s third year at Hogwarts. A werewolf and close childhood friend of James Potter, Harry’s fater [sic]. Lupin is an active member of the Order of the Phoenix.

Severus Snape the Head of Slytherin [H]ouse and Potions Master for Harry’s first five years at Hogwarts. Severus Snape’s loyalty to Dumbledore and the Order of the Phoenix is often questioned by Harry. Only through viewing Snape’s memories does Harry learn the truth about his motives.

The stamps and a range of souvenir and limited edition products can be pre-ordered now from shop.royalmail.com and are available on general sale from 7,000 Post Offices nationwide from 16 October 2018.