In this week’s Casting News, we are charmed by Domhnall Gleeson as he makes the media rounds to support his haunting new film, The Little Stranger; plus, we find last week’s birthday boy, Ezra Miller, posing with a comic book legend.

Get the latest casting scoop with one simple spell: Castium Revelio!

As part of promotion for his new film, The Little Stranger, Domhnall Gleeson (Bill Weasley) gave multiple interviews to varied media this week. Take a look at one interview with Get Into Film, where he describes how he got into character on such an intensely haunting film as well as what he would be like as a host of a dinner party.

While it took place in August, we also just have to share photos of Domhnall at the New York City premiere of The Little Stranger. You know, just because. #GingerLove. Enjoy!

Dame Julie Walters (Molly Weasley) is narrating a new television series for ITV starting on October 5, called The Big Audition. The reality show will feature real people going on casting auditions and will follow them through the entire process, including what happens behind the scenes with the decisions made by each casting panel. There will be six episodes, and if you miss any, you can catch up here, as long as you live in the UK.

The Horrible Histories series from Scholastic, which is popular in the UK, is being made into a film, and it will star a familiar face! Warwick Davis (Filius Flitwick/Griphook) has been cast in the film, which is currently titled Horrible Histories: The Movie - Rotten Romans, but his role is unknown at this time. The film is slated to hit theaters on July 26 of next year.

Looking forward to joining the cast of the #HorribleHistoriesMovie. Hoping my scenes won’t involve ye olde mud, wee and poo though!

Sir Kenneth Branagh (Gilderoy Lockhart) will continue to bring his spin on the Agatha Christie mysteries to the big screen, following Murder on the Orient Express with a film adaptation of 1937's Death on the Nile. Announced this week was the casting of Armie Hammer and Wonder Woman herself, Gal Gadot. The film is due in theaters in December of 2019.

Gary Oldman's (Sirius Black) new naval thriller, Hunter Killer, has released a behind-the-scenes featurette, "Beneath the Surface," which highlights the film's story as well as Oldman's character. Check it out below!

After two years of trying to get him on the schedule, ABC's family comedy Speechless snagged John Cleese (Nearly Headless Nick)! The premiere of the third season took place this week, featuring Cleese as Martin, the father to Minnie Driver's character, Maya. The pair had previously worked together on Will & Grace, and their good relationship on the set ultimately led to Cleese's joining the cast as a guest star. Take a look at the preview clip from the season opener!

David Tennant joined costar Michael Sheen at New York Comic Con this weekend to promote their Amazon series, Good Omens. Check out the teaser trailer from the series and official photographic stills released, as well as an interview from the pair at the convention! 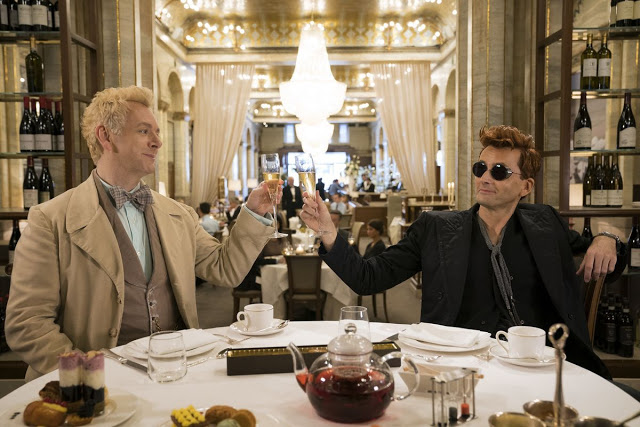 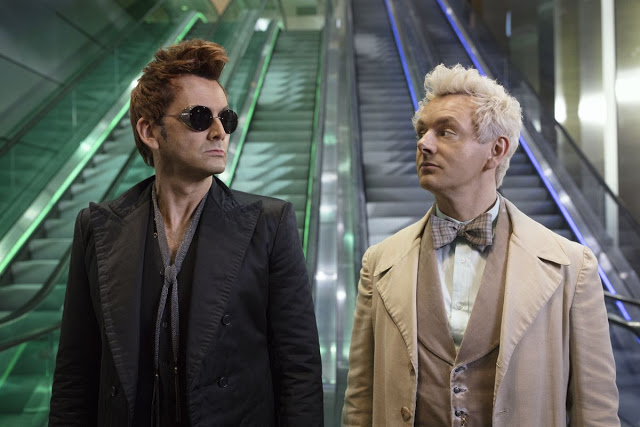 Fantastic Beasts fan favorite Ezra Miller (Credence Barebone) was photographed with comic book royalty Grant Morrison this week. Morrison has written for DC Comics, including two arcs of The Flash, which only adds to the greatness of this photo shared by Morrison on Instagram since Ezra portrays Barry Allen/the Flash in the DC Comics film world. Does this mean that Morrison could be partnering to provide a storyline for the film, which has been riddled with director and script problems for the last year or so? Your guess is as good as ours. Check out the photo below!

We previously revealed that Jude Law's (Albus Dumbledore) upcoming Vox Lux would see a release date in December, but the film will also take center stage at the opening of the Austin Film Festival and Writer's Conference on October 25! Here's the synopsis from the festival's website:

'Vox Lux' begins in 1999 when teenage sisters Celeste and Eleanor survive a seismic, violent tragedy. The sisters compose and perform a song about their experience, making something lovely and cathartic out of catastrophe — while also catapulting Celeste to stardom. By 2017, the now 31-year-old Celeste is mother to a teenage daughter of her own and struggling to navigate a career fraught with scandals when another act of terrifying violence demands her attention.

You can learn more about the festival and conference and purchase tickets to attend here.

If you've been waiting for The Walking Dead to come back, you probably already know that two Fantastic Beasts stars are joining the cast this season. As previously announced, Samantha Morton (Mary Lou Barebone) and Dan Fogler (Jacob Kowalski) will appear in Season 9 of the series. While we are uncertain whether or not their characters will cross paths, here's what we do know based on the comics that have inspired the television series!

For those unaware of the new group, the Whisperers are survivors of the apocalypse who blend in with the dead by wearing suits made from human flesh. What's more, they see the end of the world as the next phase of human evolution, and have adopted more primal customs as a result. As the leader, Alpha is one of few members of the group.

Fogler's character, unfortunately, is a bit more mysterious. Not much has been released except the reveal that he follows another leader of a different group. All we know is that his character's name is Luke and that he belongs to a group run by Magna, who leads her survivors into Alexandria during this upcoming time-jump that is Season 9.

We’re excited about all the projects yet to come from the cast and crew members whom we have come to respect and admire over the years. Keep following us every week to see what your favorite Potter and Fantastic Beasts actors are up to, and don’t forget to let us know what you think about the projects we’ve reported on. We love hearing from fans! You can tweet us, leave comments for us below, or post comments to our Facebook page.