Whether you first discovered them through their screenshotted appearance on Tumblr or grew up watching the short videos on YouTube, Potter Puppet Pals is one of the most iconic web series around. The series began in 2003 with the animated clip titled “Bothering Snape,” uploaded to the Newgrounds website. In 2006, creator Neil Cicierega moved his works to YouTube, where they have since taken off with the creation of over 20 videos! Today we are counting down the five best Potter Puppet Pals videos!

The videos are known for their over-the-top parodying of our favorite Hogwarts characters, and “Neville’s Birthday” is no exception. In the episode, Dumbledore is the crazy, sometimes nude, Headmaster who forces the arrogant Harry Potter, moronic Ron Weasley, and overblown bookworm Hermione Granger to attend a birthday party for Neville Longbottom, depicted as a ripe butternut squash. Squash-Neville implodes at the end of the episode, but in a quirky turn of events, his friends discover that he is secretly delicious, to which ghostly Squash-Neville replies that “it’s the inside that counts.” The highlight of the episode is definitely party games such as “walking in circles” or the catchy “Happy Hogwarts Birthday” song! 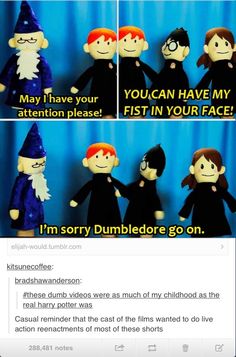 Let’s hear it up for Ronaldo, the new alter ego of Ron Weasley! In this exciting episode, Ron is sucked into a vortex, and when he is pulled out, he is a much cooler version of himself. Dumbledore immediately declares that Ronaldo is even better than Harry, causing hot-headed Harry to cast the spell Petutiarius Shrinky Dinkius. Ronaldo transforms back into Ron and Harry reclaims his social status. Some of my favorite moments in the episode include the invention of Ronaldo and yet another catchy song: “My name is Harry Potter. I am the king of the school. I am better than everybody in the school.”

If you’ve ever wondered what goes on in Snape’s mind, this video is for you! In it, Harry just happened to find Snape’s diary (which was locked away under his bed) and decides to read snippets from it. Some of Snape’s daily conundrums include being bullied by Harry and “the orange one” and losing a button. After said lost button was pointed out by McGonagall in front of all the staff, Snape wrote an ode to the button with lines that include “Button, oh Button, where hath thou fled? Did thee tarry too long amongst fabric and thread? Did thee roll off my bosom and cease to exist? How I wish I could follow thee into the mist.” Hey, Snape is a poet and we didn’t even know it!

While Potter Puppet Pals is definitely a humorous, over-the-top exaggeration of all our favorite characters, one cannot help but think that this video is not too far off from reality. In the video, which is “rated PG-13 for language and boyish attitude,” Dumbledore releases a list of banned wizard swears, which the trio decides to try out by prank calling Lord Voldemort. When Snape attempts to get the three students in trouble, Dumbledore doesn’t punish them and instead claims that he “doesn’t even remember five minutes ago.” He then tells Harry, Ron, and Hermione about an ancient swear lost to time but tells them never to repeat it to anyone. In true Harry fashion, he immediately heads off and uses it without abandon.

“Snape, Snape, Severus Snape!” As soon as you hear that catchy line, you can’t help singing along. It is the first video that pops up when you search “Potter Puppet Pals” on YouTube and probably the most well known. The video features an array of characters, all singing their names to a rhythmic, inexplicable ticking sound, beginning with Snape. At its crescendo, everyone is singing in a concurrent cacophony that ends when Ron discovers the source of the ticking.

Did your favorites make the list? Are there other Potter Puppet Pals videos you enjoy? Let us know in the comments below!