We are days away from the release of Fantastic Beasts: The Crimes of Grindelwald and there is so much to look forward to, not least the incredible graphic art we can expect from Eduardo Lima and Miraphora Mina. The design duo held a press preview of a new gallery at their exhibition space, the House of MinaLima, which displays the gorgeous and detailed work they did on this latest film.

The gallery is so new that there are still a few empty spots on the walls waiting for pieces that have been embargoed until Friday because of worries that they might spoil the film. Mina said of one of the yet-to-be-seen designs, “If you like the Black family tree, you’ll love this!”

There are plenty of magazine covers bearing stories about our favorite Magizoologist that bring somewhat hilariously to mind just how awkwardly Newt must be handling fame at the beginning of this film. A highlight is The Witch’s Friend (For All American Witches), which describes Newt as “British Bachelor Extraordinaire”! 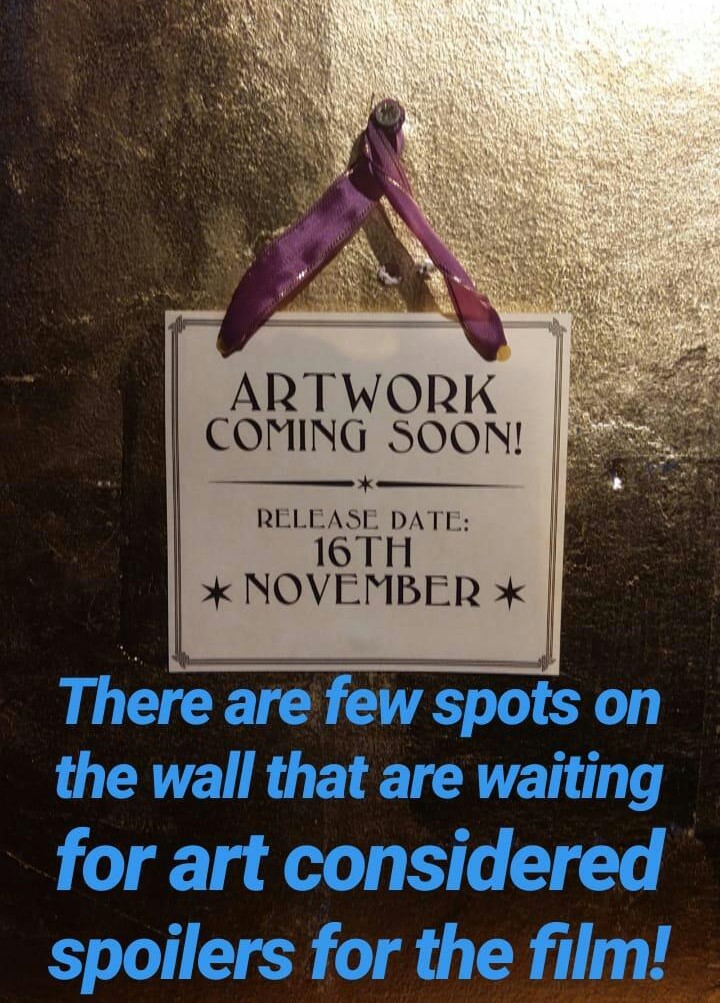 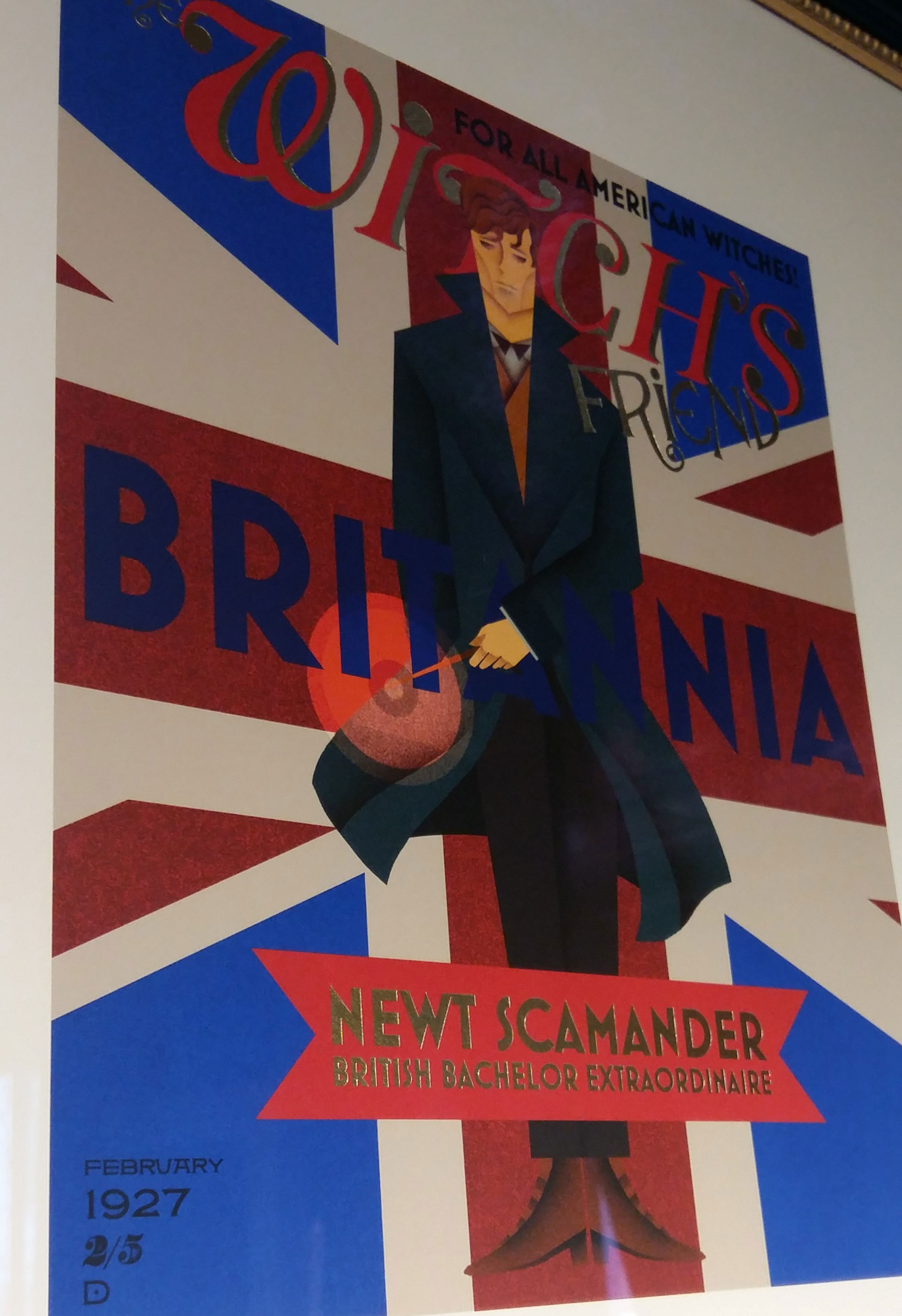 “The Witch’s Friend” – Design by MinaLima for “Crimes of Grindelwald”

Grindelwald insignia – Design by MinaLima for “Crimes of Grindelwald” 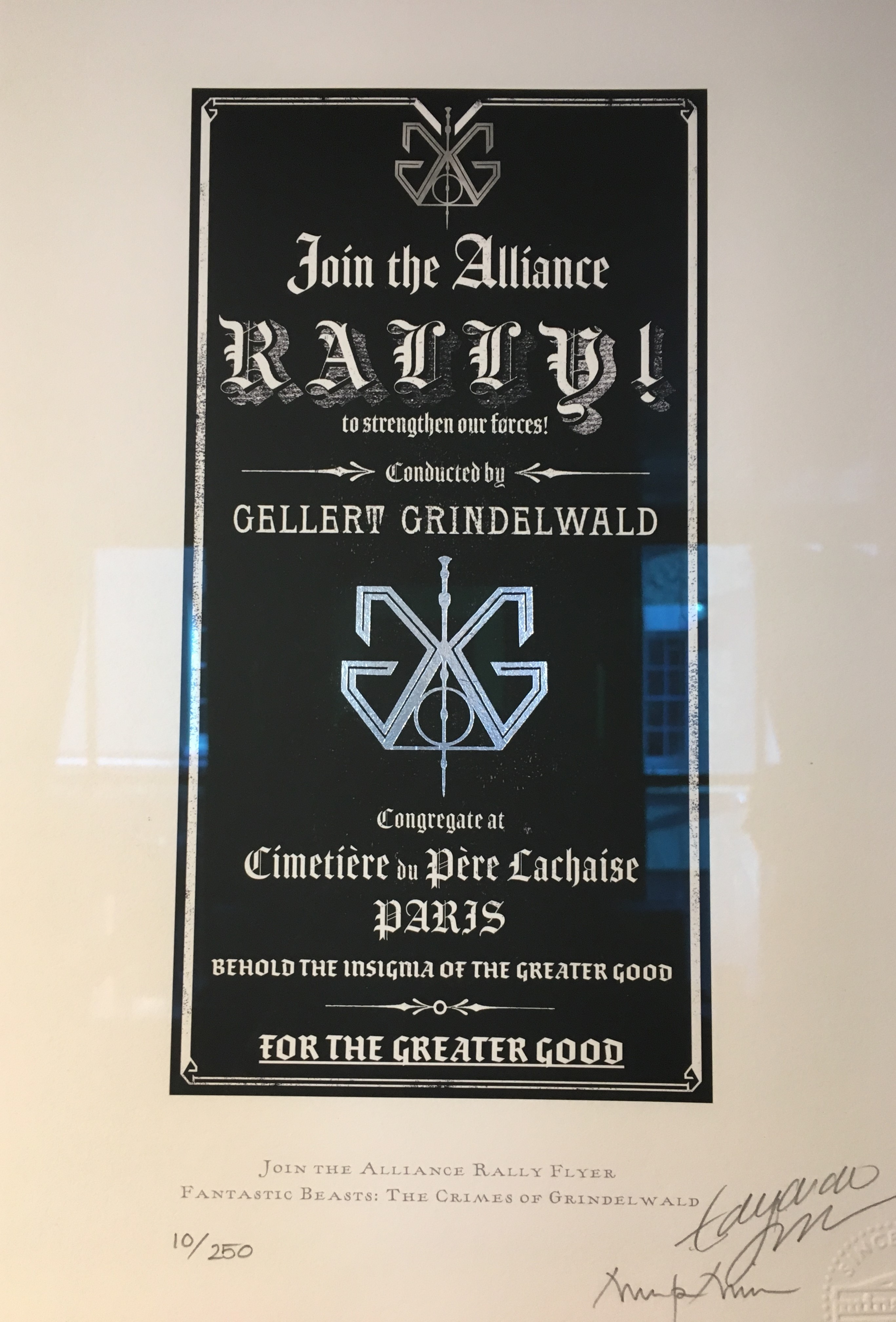 Grindelwald rally flyer – Design by MinaLima for “Crimes of Grindelwald”

Plenty of MinaLima’s pieces don’t end up in the final cut of the film or are only seen for a moment, which is why it’s so special getting to see them up close. Despite being used quite a bit in prerelease promotions, Gellert Grindelwald’s insignia falls into this category. For these pieces, the designers researched fascist propaganda and fused an Art Deco style with a traditional Germanic font to reflect Grindelwald’s forward-thinking and his traditionalism. They also translated the “For the Greater Good” slogan we know from Harry Potter and the Deathly Hallows into German.

Mina told us that the first consideration in their process comes from what’s happening within the universe – including the tone, narrative, and characters connected to the art – before beginning any outside research (Mina’s favorite part). For instance, art for a circus could be fun, but reading further, they can tell that the film’s Cirque Arcanus is more sinister. Lima explained how they made signs for the circus slightly roughly painted because they knew those created at the time would have been done by the circus acts themselves. (Character error is also their excuse for the very occasional spelling mistake!)

Miraphora Mina of @minalima tells us that the first consideration in their process comes from within the universe, including the tone, narrative, and characters, before beginning any outside research. Circus artwork might be fun, but they knew Circus Arcanus was something darker. pic.twitter.com/HYNXmn4yGc

Another great thing about seeing the designs up close is the chance to catch all the hidden details and easter eggs. The book cover for Advanced Defence Against the Dark Arts says it was written by Galatea Merrythought, a Hogwarts professor referenced in Harry Potter and the Chamber of Secrets. A front page for the Daily Prophet bears reference to a lost three-headed dog, as well as featuring the headline “Mysterious Ginger Witch Identified in Greek Street.” The “Ginger Witch” refers to a friend of MinaLima’s and is an ongoing reference throughout their wizarding work, while the House of MinaLima can be found on Greek Street, London. 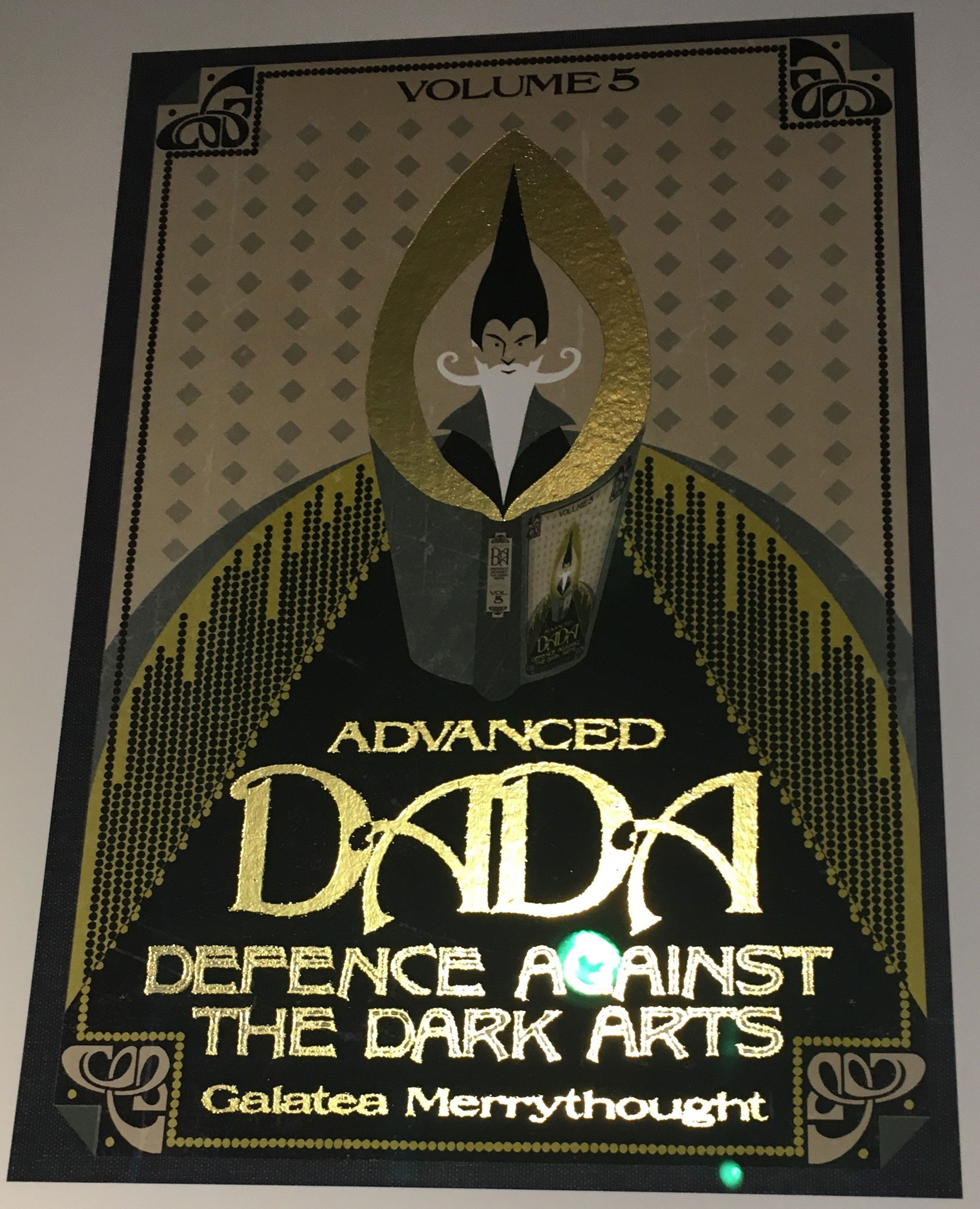 “The Daily Prophet” – Design by MinaLima for “Crimes of Grindelwald”

“The New York Ghost” – Design by MinaLima for “Crimes of Grindelwald”

Lima said that the reason the cover for Fantastic Beasts and Where to Find Them in this film differs from the one they created for the Harry Potter series is that they’re different editions – after all, they do exist about 65 years apart. He joked that they might have to create different covers for each of the 52 editions referenced in the introduction of the Fantastic Beasts published in our Muggle world.

Listening to two fansite representatives debate Nagini’s future, Lima told us that he loved the theories but swore he knew no more than us ahead of properly starting work on the third film early next year.

Something Lestrange is happening at @minalima… pic.twitter.com/7xs6fZ5NJW

The complete exhibition (with potential spoilers) will be open from noon on November 16, but you can also go to a preview event on November 15 from 9:30 p.m. to 1:30 a.m. GMT. Gallery staff will run guided tours until 11:30 p.m., and then starting at midnight, Lima and Mina will sell and sign copies of their new book The Archive of Magic: The Film Wizardry of Fantastic Beasts: The Crimes of Grindelwald.