Hogsmeade is one of my favorite locations in the Harry Potter series, and I’ve always been saddened that we never really get to properly explore the streets of the only entirely wizarding village in Britain in either the books or the films. This is particularly true of Hogsmeade in winter: Who wouldn’t want to experience the festive season in this quaint and quirky village?

Thankfully, the Harry Potter Illuminated Village Collection from The Bradford Exchange combines my love of Hogsmeade with my love of the festive season. The first item in the series of collectibles is a cozy-looking “THREE BROOMSTICKS PUB™”, the perfect place to finish a day of holiday shopping in the village. As the collection grows, imagine all the wonderful places collectors will be able to explore within the magical world of Harry Potter! The handcrafted and hand-painted model of the “THREE BROOMSTICKS PUB™” is covered in glittery snow drifts and has three crooked chimneys, which can be easily assembled and disassembled for storage. The attention to detail in this item is incredible, from the three broomsticks and lamp above the door to the brick and wood detailing of the building itself. The front-facing side of the building features eight windows, with a further four on the back of the model. And if all the snow weren’t enough, leaning up against the side of the pub is a Christmas tree to make the piece feel even more festive. 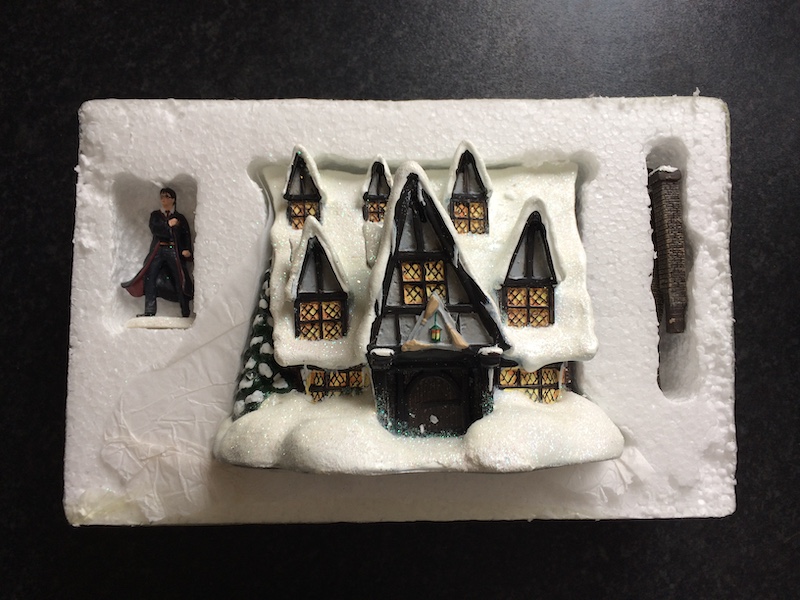 The “THREE BROOMSTICKS PUB™” collector’s model comes with three detachable chimneys, a “HARRY POTTER™” figurine, and a certificate of authenticity. 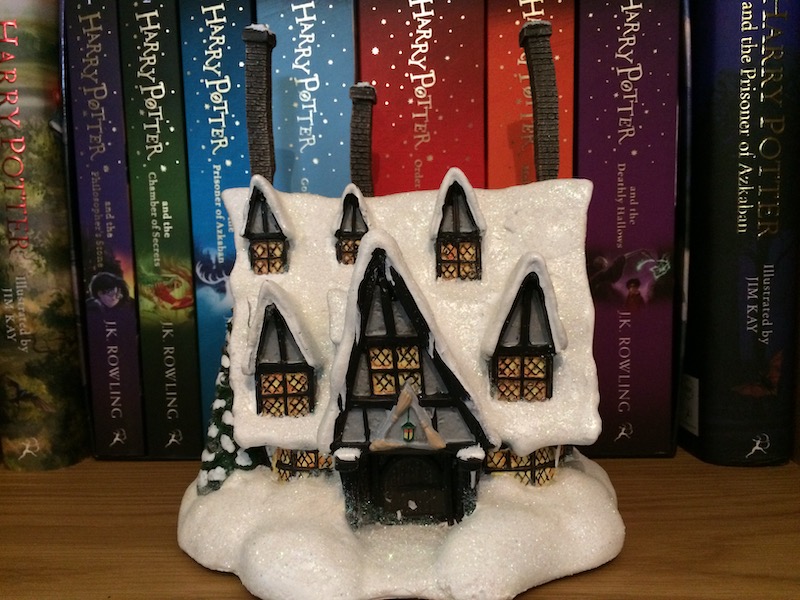 Covered in glittery snow, the “THREE BROOMSTICKS PUB™” looks quaint and quirky with its crooked chimneys and windows.

After hunting down the smallest screwdriver I could find to open the battery compartment, I was able to experience the real magic of this collector’s item. With the help of Mr. Weasley’s favorite Muggle invention (electricity, in the form of three AAA batteries), the windows and Christmas tree are filled with a welcoming warm light. 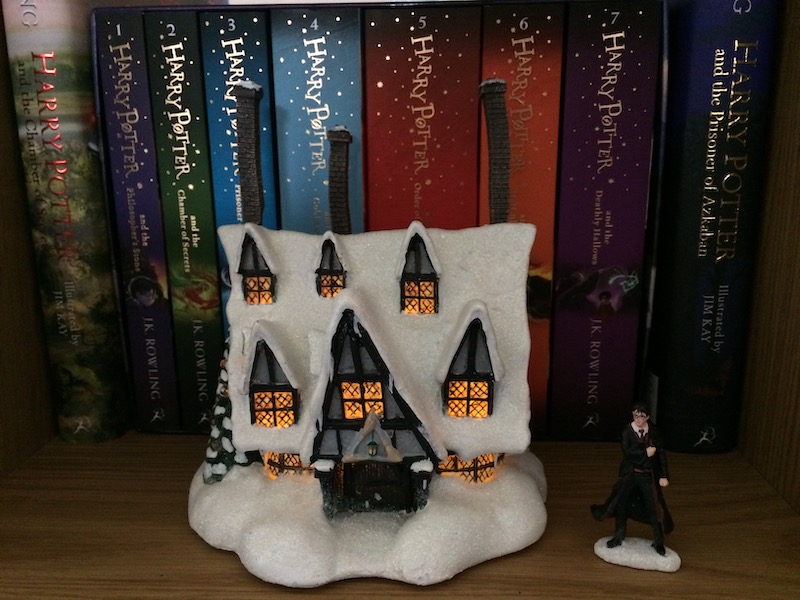 Dim the lights, add some batteries, and flip the switch on the back of the “THREE BROOMSTICKS PUB™”, and the magic of this collector’s item is revealed.

This element is what I feel sets this model apart from other collectibles. The illumination draws your attention to details in the design that you may not have otherwise noticed, and combined with the glittery snow, it gives the wizarding pub an even more magical feel. The “THREE BROOMSTICKS PUB™” looks great on its own, but you can imagine how amazing the village collection will look when all of the pieces are illuminated! 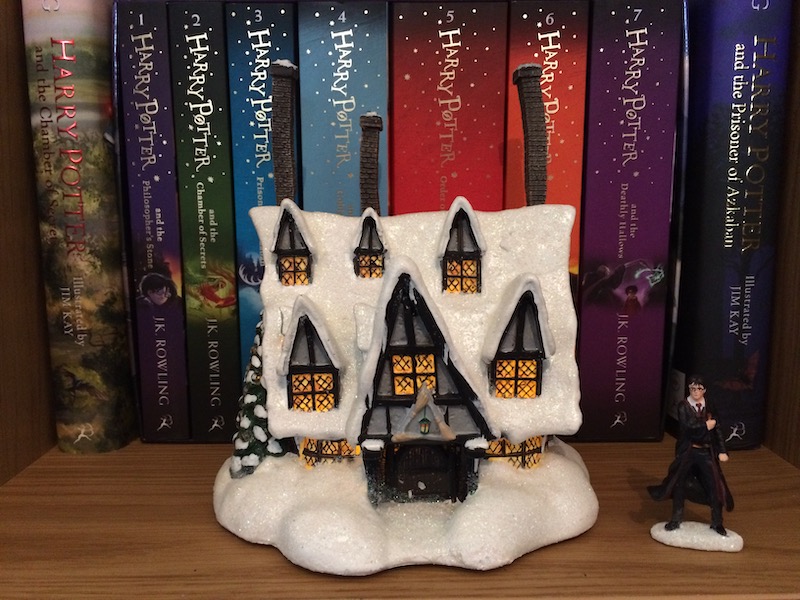 When illuminated, the windows of the “THREE BROOMSTICKS PUB™” look so cozy and inviting! 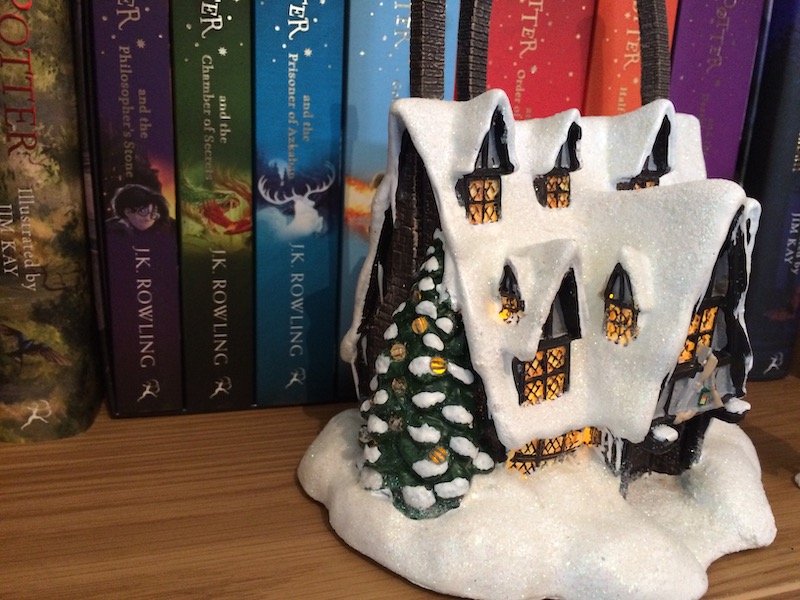 A Christmas tree can be seen leaning against the outside wall of the “THREE BROOMSTICKS PUB™”, which adds to the festive feel of the model. 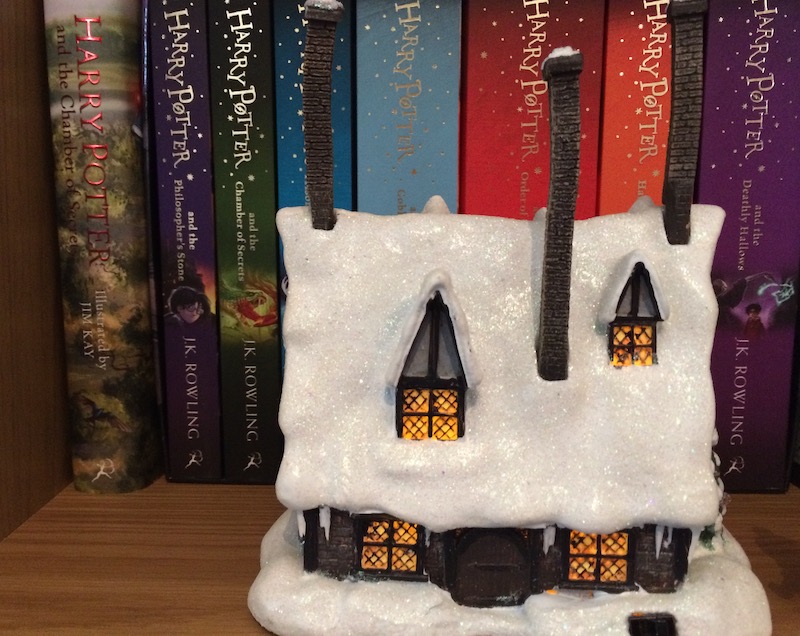 The chimneys attach to the model easily, and they make the pub look even more magical.

The piece also comes with a “HARRY POTTER™” figure, which despite being slightly oversized in comparison to the building, shows incredible detail suggesting movement in its school robes. 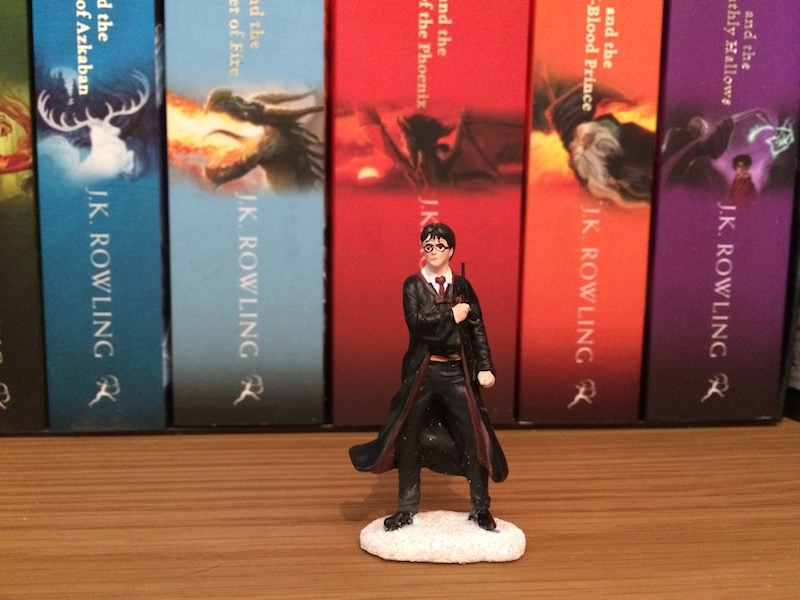 The “HARRY POTTER™” figure included has been hand-painted and includes details such as the Gryffindor crest on its robes. 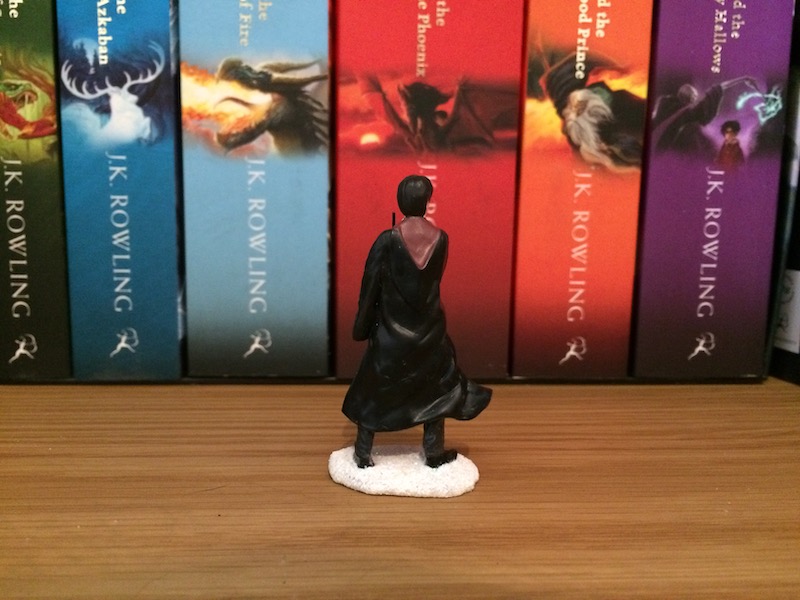 Detailing on the back of the “HARRY POTTER™” figurine gives the impression of movement and makes the figurine more dynamic.

Other pieces in this collection will come with additional figurines, including Ron and Hermione but also potentially other characters from the series. The “THREE BROOMSTICKS PUB™” from The Bradford Exchange is a perfect Potter-themed holiday piece, and it’s exciting to think that with each magical set, collectors can have their very own Harry Potter Illuminated Village. Currently, this collection is available in the United States and Canada only. If you are a fan in the United States and want to start collecting, you can subscribe here. If you are in Canada, you can start your collection by subscribing here.

We know you want to take home this amazingly magical “THREE BROOMSTICKS PUB™” and “HARRY POTTER™” figurine, so make sure to enter our contest for your chance to win! Our giveaway is open to residents of the United States and Canada only at this time.

Currently, there are five announced sets in the Harry Potter Illuminated Village, with more issued each month. As a collector subscribed to The Bradford Exchange’s subscription plan, the entire collection in the Illuminated Village is reserved for you, which means regular deliveries of each new set and no increase in price! New sets are billed and shipped separately approximately every other month, once your previous bill has been paid in full, and you can cancel your plan at any time with no obligation. Here are the five sets that have been announced so far:

We have three sets of the “THREE BROOMSTICKS PUB™” with the “HARRY POTTER™” figurine to give away. Our contest starts on March 7 and will end on March 21 at 11:59 p.m. ET. Winners will be contacted via email after the contest ends and will be given 24 hours to respond and claim their prize. If no response is received within that time frame, another winner will be chosen, so make sure you are checking your spam and junk folders in case our notification email goes astray!

A review set of the Harry Potter Illuminated Village “THREE BROOMSTICKS PUB™” and “HARRY POTTER™” figurine was provided to MuggleNet by The Bradford Exchange. All opinions belong to the reviewer.