Gringotts Reveals the Treasures Hidden Within at the Warner Bros. Studio Tour

Since its official announcement back in January, the set of the famous wizarding bank is now ready to reveal the secrets hidden within.

At an official opening attended by figures from the wizarding world, including Jason Isaacs (Lucius Malfoy) and Dan Fogler (Jacob Kowalski), visitors to Warner Bros. Studio Tour London – The Making of Harry Potter were treated to viewing the brand-new exhibit alongside some other surprises.

Visitors will now enter via a new entrance that contains a Chocolate Frog Café, a vast rug showcasing dueling wands, and most strikingly, a dragon hanging from the ceiling. 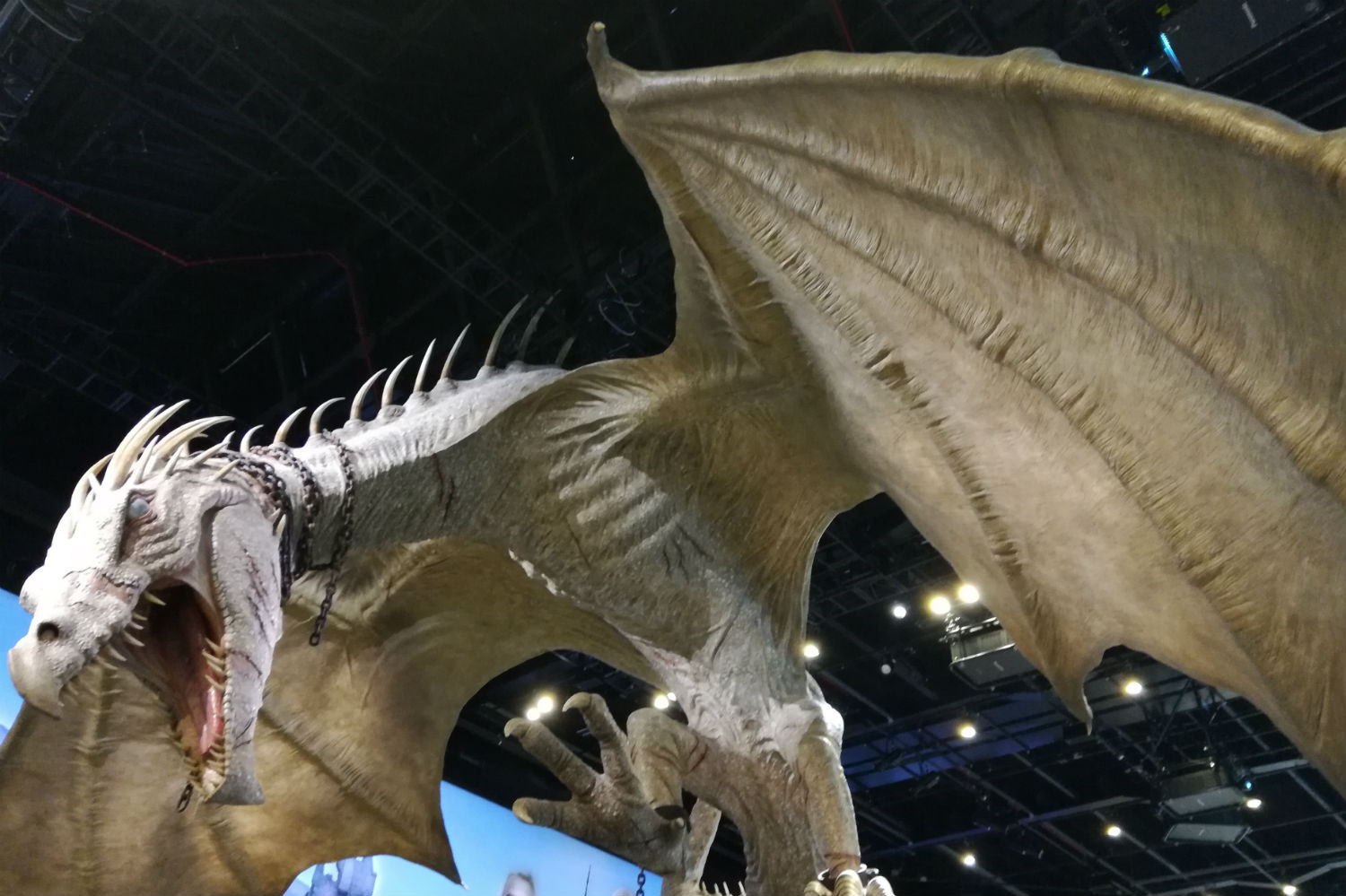 As the room’s centerpiece, it’s clear that this is the dragon that the trio escapes from Gringotts on in Harry Potter and the Deathly Hallows by the broken chains and scarring spread across its body.

That’s not all that’s new. The tour’s entrance now starts off just as Harry Potter and the Sorcerer’s Stone did on Privet Drive. Visitors will find walls adorned with pictures of the Dursley family while the cupboard under the stairs that Harry slept in is the first set to greet visitors. The entrance isn’t the only section to have undergone some changes. Eagle-eyed viewers will notice that a new shop window has sprung up at the bottom of Diagon Alley. Markus Scarrs Indelible Tattoos has now made its home in Diagon Alley alongside the front door to the Daily Prophet. However, the star attraction was undoubtedly Gringotts Bank itself. Visitors are greeted by the Gringotts seal upon reaching the start of the exhibit. The first room looks at how the crew was able to transform the actors into goblins. Everything from molds of the goblin heads to their very fingernails is on display for guests to marvel at. The room further features many of the costumes worn by the goblins and goblin-related characters. 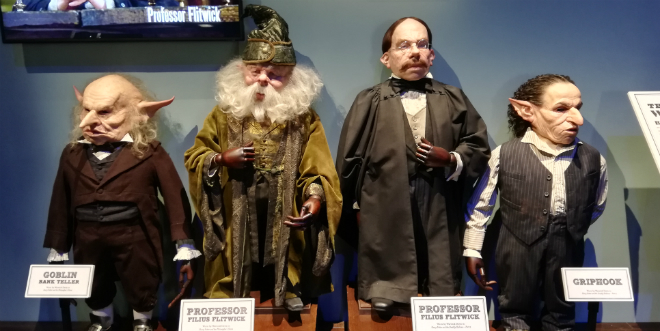 Guests can travel on to view concepts of Gringotts the building itself and have the chance to spy on Vault 713, which holds the Sorcerer’s Stone. Be sure the check out the ornate detail of the vault door!

Moving along the section, guests are also treated to unlocking more of Gringotts’ secrets with a peek inside the Lestrange family vault, brimming with piles of treasure affected by the Flagrante and Gemino Curses. 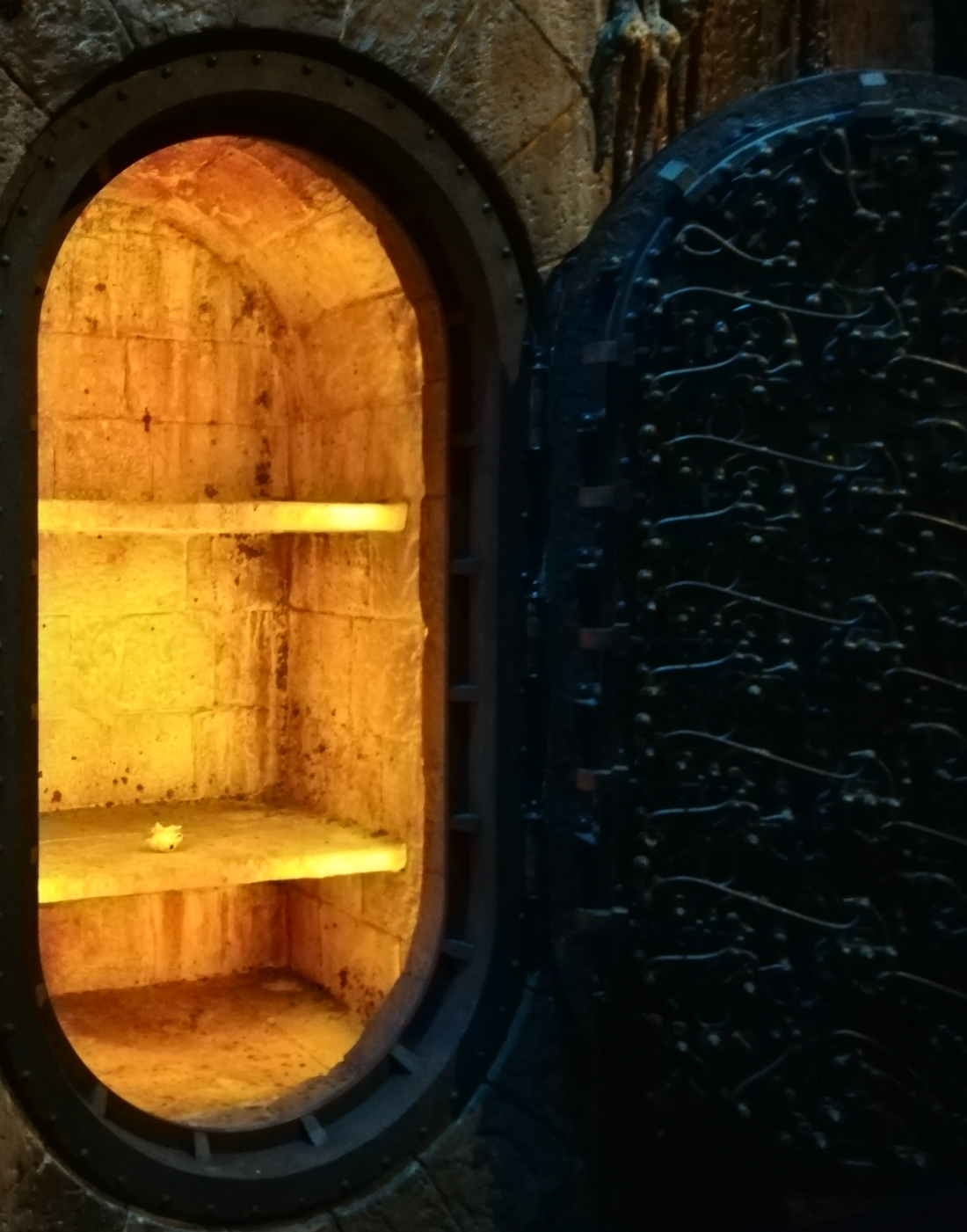 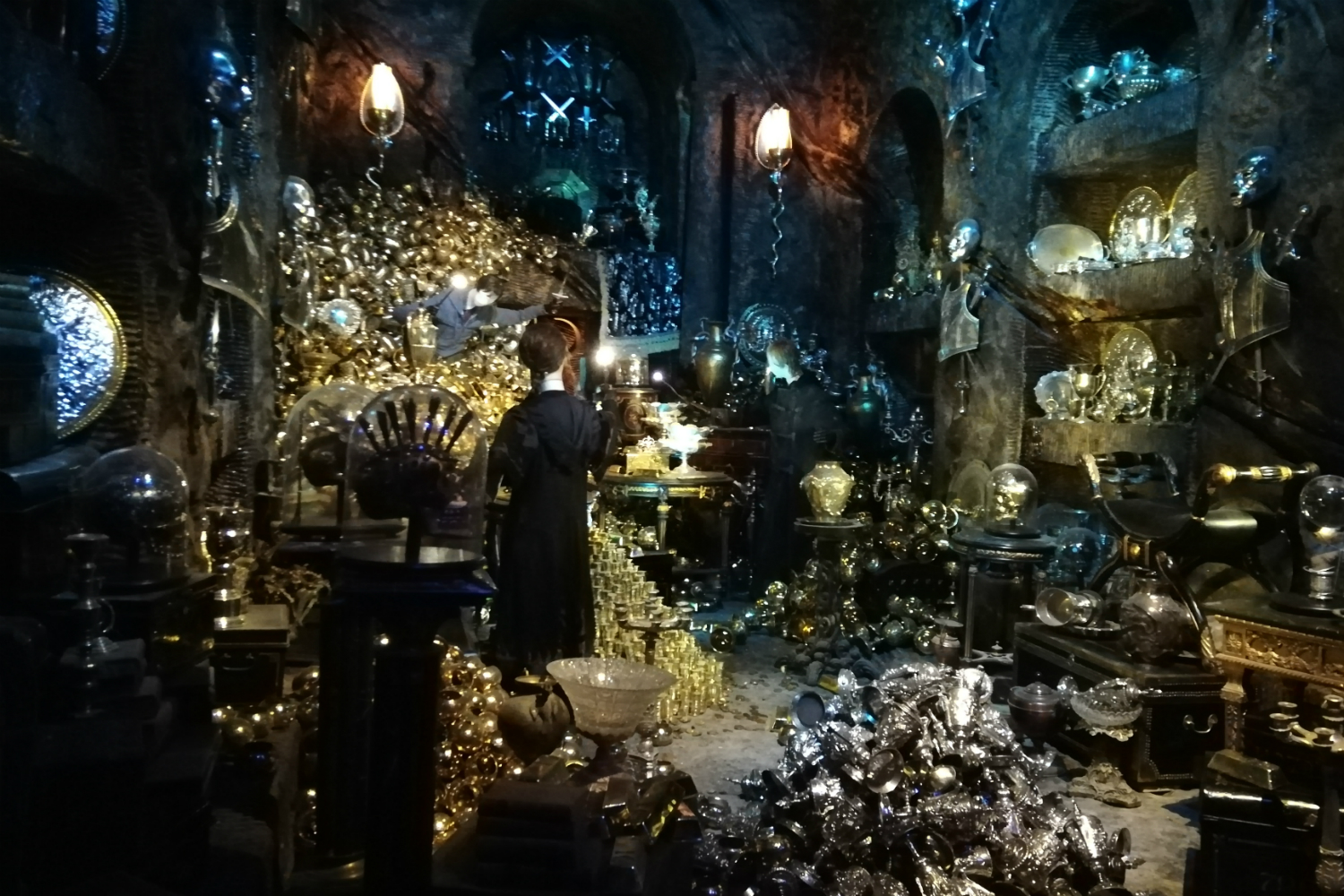 Past these, visitors are able to make their way onto the breathtaking set of Gringotts Bank itself, complete with goblin tellers, the iconic desks that line the hall, and stunning chandeliers that hang from above.

A staff member informed us that the chandeliers are actually made out of plastic since the crew found that plastic refracted the light better than crystal!

Moving along the hall, visitors are even able to visit the Head Goblin just as Harry and Hagrid did during Harry’s first visit to the bank. 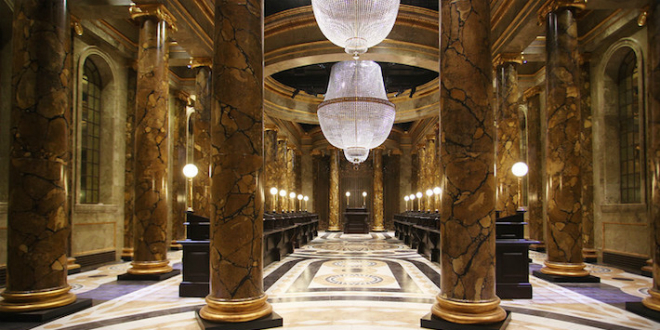 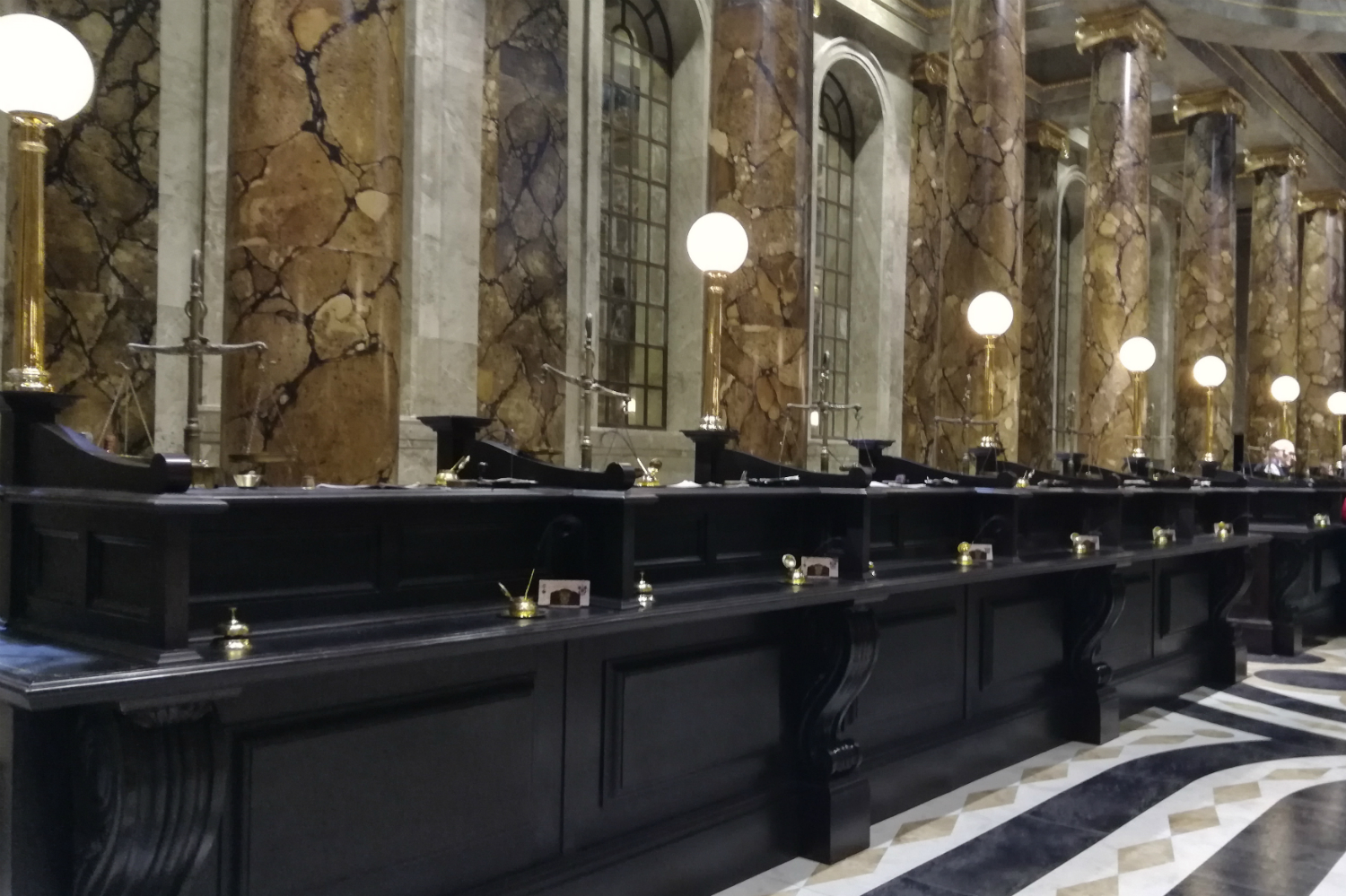 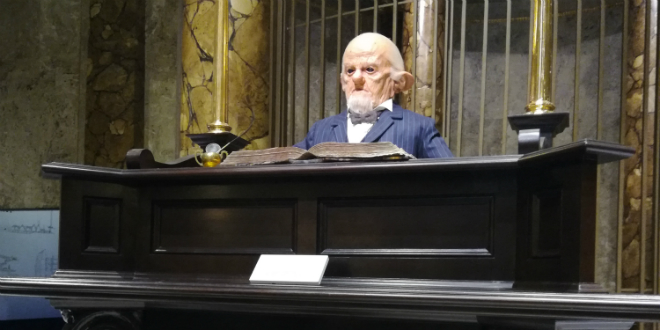 Stepping off this set, however, visitors are struck with a far different view of the once-opulent bank. The marble pillars that line the hall are crushed on the ground as it lies in a state of destruction. Visitors are then treated to a spectacle as loud thuds herald the arrival of the fierce Gringotts dragon, which leers at the crowd before unleashing a firestorm across the hall in an awe-inspiring moment. 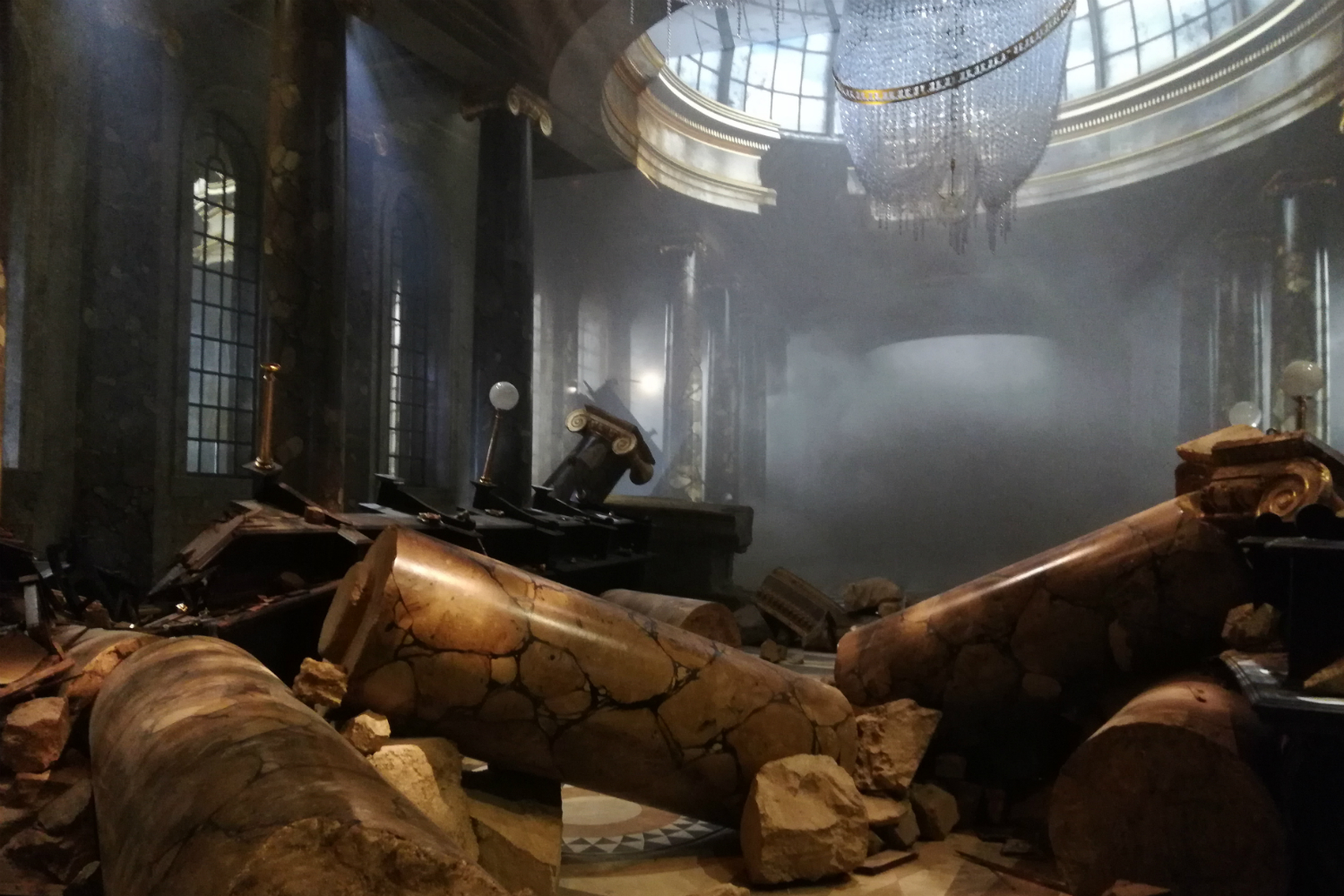 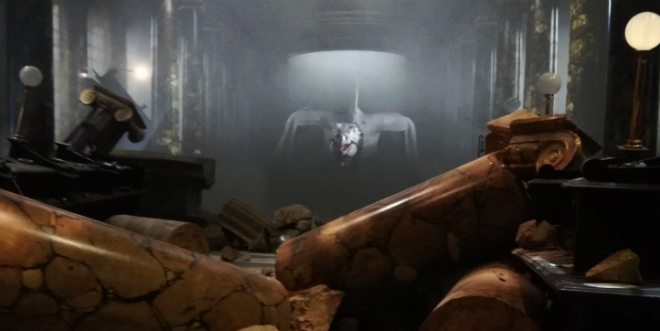 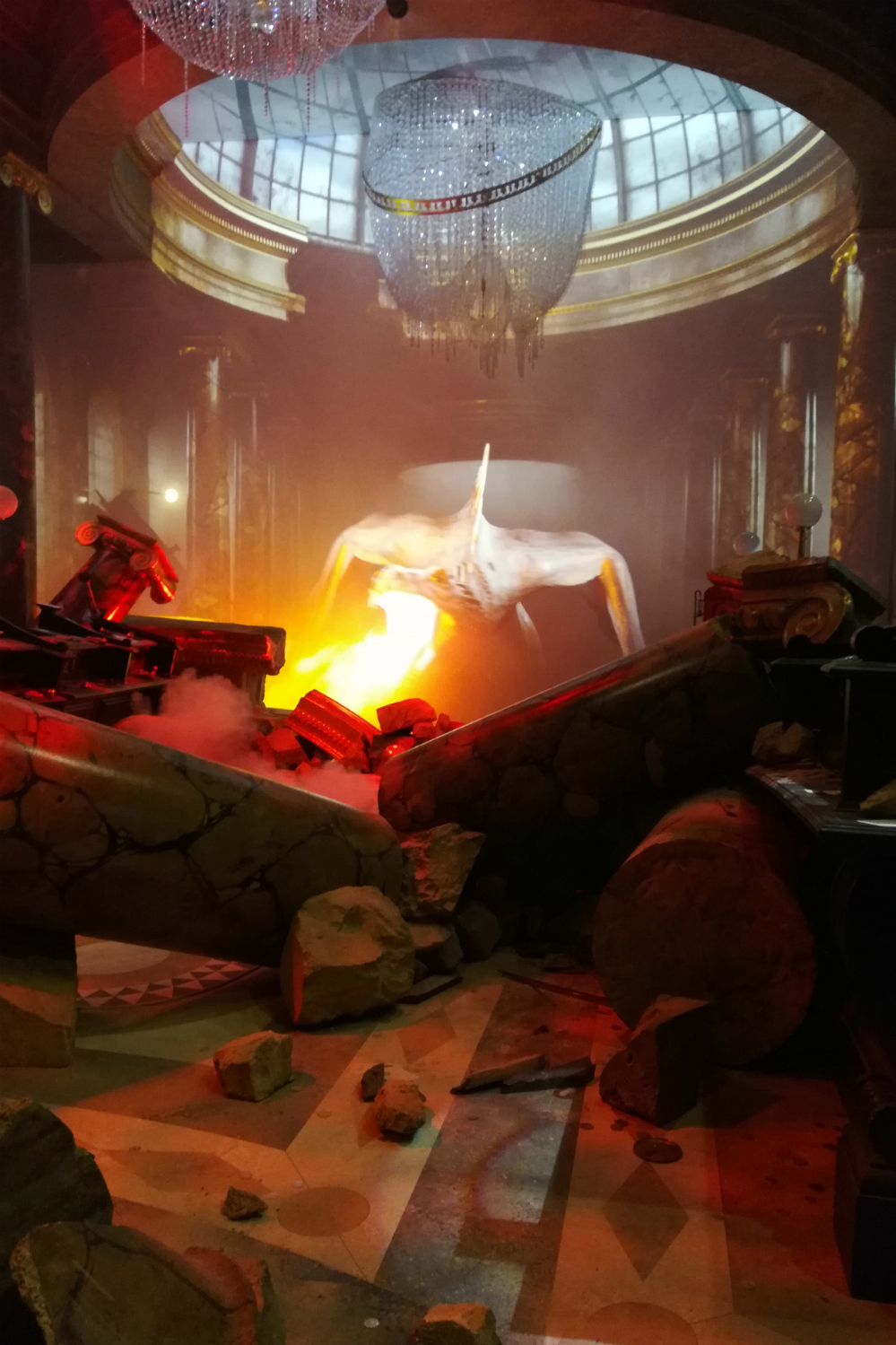 Since guests aren’t allowed to cross the barriers at this set, it actually contains more material from the original since it doesn’t need to withstand as much wear and tear.

You can check out our live stream through the exhibit for an even closer look at everything Gringotts, but with the official opening on April 6, be sure to book your tickets now!

What are you most excited to see?