Dates and Locations for US Quidditch Regional and National Championships Announced

The dates and locations for US Quidditch (USQ) fixtures for the 2019–2020 and 2020–2021 seasons have been announced, with the US Quidditch Cup due to take place in Charleston, West Virginia, and Salt Lake City, Utah, respectively!

US Quidditch Cup 13 will be held on April 18–19, 2020, at Shawnee Sports Complex in Charleston, West Virginia. This is the first time that the venue will host a USQ event, which is partly the reason why it was chosen. USQ is keen to forge new partnerships that will give visitors the chance to take part in unique local activities. The bid was further noted for its creativity, support on offer for medical staff, logistical equipment, hospitality and security, and location as being more centrally located for many teams.

On April 17–18, 2021, US Quidditch Cup 14 will be hosted at the Regional Athletic Complex in Salt Lake City, Utah. This will mark the first time that Salt Lake City will host a major quidditch championship. The complex was chosen for its excellent facilities, significant marketing and volunteering resources, and opportunities for visitors to explore the surrounding outdoor areas, such as numerous national parks.

Many will also be pleased with this choice since it will mark the first time that a venue has been chosen west of the Rocky Mountains, which should help alleviate the travel burden on those who otherwise find they must always travel longer distances.

The final decision process was handled by US Quidditch staff and the board of directors and focused on certain priorities gathered from feedback from players, spectators, and officials. Travel costs, quality of facilities, and the opportunity for activities outside of the main event were all among the key factors in the decision-making process.

The US Quidditch Cup is the culmination of the US quidditch season and sees the best quidditch teams from across the country battle it out for the championship title, in both the collegiate and the community divisions. Teams can qualify through regional events held throughout the year, the dates and locations of which have also been released.

Information about tickets is yet to be announced, but you can sign up using the USQ interest form to be kept updated with the latest news.

Do you agree with these venue choices? Should only experienced venues host the biggest competition in US quidditch or should brand-new venues get the chance to prove themselves on the ultimate stage? 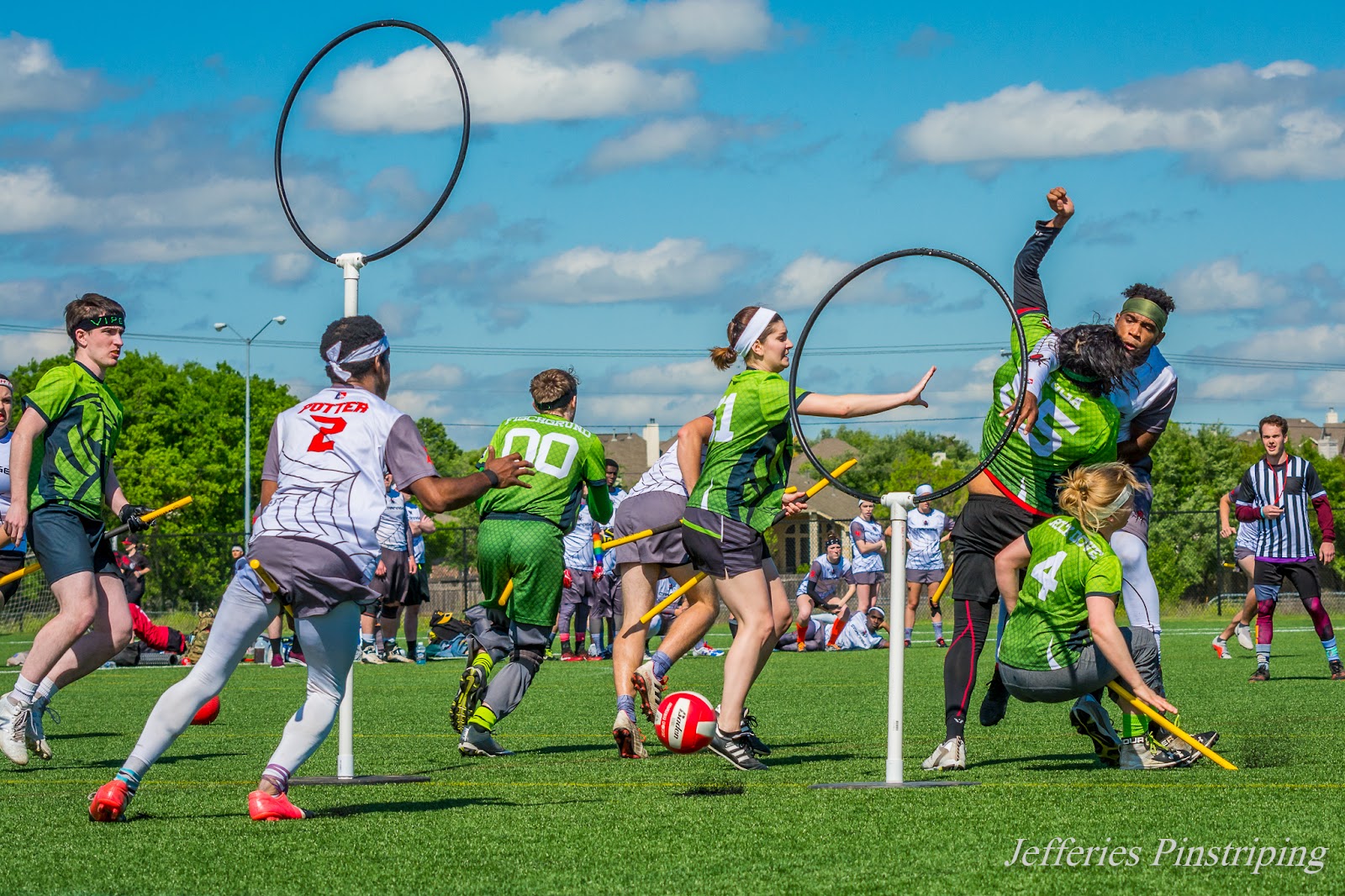 Carnage Quidditch versus Silicon Valley Vipers at US Quidditch Cup 12 in Round Rock, Texas. Photo by Darrell Jeffries.

CHARLESTON, WEST VIRGINIA, AND SALT LAKE CITY, UTAH, TO HOST
US QUIDDITCH CUP IN 2020 AND 2021

Tickets for US Quidditch Cup 13 will go on sale later this year. Those interested in attending can fill out this form to be notified when more information is available.

“Events are a key part of USQ’s strategic plan, and they further our mission of creating competitive opportunities that grow our community, as well as strengthening our commitment to empowering all genders to compete together. I am incredibly grateful to the support of our new partners in Charleston and Salt Lake City,” said Sarah Woolsey, USQ’s executive director.

US Quidditch Cup 12 was hosted April 13-14, 2019, in partnership with Round Rock CVB, which had 59 collegiate and 24 community teams competing. Over 3,000 athletes, fans, officials, and volunteers were in attendance, with several thousand more tuning in online. The champions were Texas Quidditch from the University of Texas at Austin in the Collegiate Division and Texas Cavalry in the Community Division.

Charleston is the river[-]adjacent capital city of West Virginia. It’s a big city with a small-town feel. With its focal point for tourism in West Virginia, Charleston is known for food, art, recreation, and music. Whether it’s a weekly summer concert on the riverfront or catching a baseball game at the minor league baseball affiliate, Charleston has something for everyone. You are never far from adventure. There are many local restaurants and you're mere miles from outdoor activities ranging from white water rafting [to] world-class skiing. With other great cities like South Charleston, Dunbar, Nitro, and Saint Albans, there is a restaurant or activity to keep you busy! The Shawnee Sports Complex knows all visitors will understand why West Virginia is referred to as “Wild and Wonderful.”

“The Shawnee Sports Complex opened a year ago. It was a sketch on a napkin that has grown to exceed all expectations we could have had. Today’s announcement from US Quidditch is a tribute that we are moving in the right direction... On their visit, they saw the work and dedication we have committed to bringing athletic tourism to our area. Thank you for choosing us and welcome to Shawnee Sports Complex!” said Kanawha County Commissioner Ben Salango.

Salt Lake, nestled against the spectacular Rocky Mountains, offers an energetic and friendly downtown that’s full of restaurants, bars, brewpubs, [and] cultural and historical attractions. The city is just minutes from the airport and competition venue and offers a clean, vibrant, and walkable experience. When the competition ends, athletes will have access to dozens of local world-class attractions around Salt Lake City and over 21 national parks and monuments within a few hours’ drive.

"We are thrilled to have US Quidditch host a [n]ational event here in Utah with the [...] 2021 US Quidditch Cup. This event will continue to build our brand as '[t]he State of Sport,' and we know it will have [a] great economic impact [on] our state,” said Jeff Robbins, president and CEO of the Utah Sports Commission.

“Our community is absolutely thrilled and honored that US Quidditch has selected us. The Quidditch Cup is a very unique and high[-]profile sporting event that we have had our eyes on for quite some time. This is an exciting moment for Salt Lake,” said Clay Partain, Director of Sports Market Sales at Visit Salt Lake.

“We’re very excited to host the Quidditch Cup in 2021. The RAC has wanted to host a quidditch event since the complex opened in the fall of 2015, and it’s great to bring US Quidditch out to the [W]est [...]. We anticipate a large crowd for the event and look forward to building a lasting relationship, which will bring plenty of enthusiasm to the RAC and the surrounding community,” said Chris Laughlin with the Regional Athletic Complex.

Quidditch is a full[-]contact, competitive, mixed [-]gender sport inspired by the Harry Potter series. It began in 2005 and has since spread to over 300 colleges, high schools and community teams nationwide. US Quidditch includes official club teams at traditional sports powerhouses like the University of Texas; University of California, Los Angeles; and University of Florida. Teams compete over a year[-]long season. USQ hosts seven regional championships that crown regional champions and are typically part of the qualification process for teams attending the annual US Quidditch Cup. At these events, teams compete in one of two divisions: collegiate and community.

Quidditch is played with seven players to a team all mounted on brooms. Three chasers score goals by putting the quaffle (a volleyball) through any of three hoops at the opposite end of the field. A keeper defends the hoops, while two beaters throw bludgers (dodgeballs) at opposing players to temporarily knock them out of the game. Meanwhile, each team’s seeker tries to catch the snitch: an autonomous yellow-clad athlete who has a tennis ball in a custom-made velcro tail hanging from the back of their shorts, similar to flag football. A game of quidditch ends when the snitch tail is caught, and the capturing seeker’s team is awarded an additional 30 points. US Quidditch’s official rulebook [sic] is available free for download here.