Characters That Would Have Made the “Potter” Movies Magical

Nothing sounds more tempting than getting your pals together for a Harry Potter marathon. Unfortunately, it might be hard to come across a spare 20 hours to watch all the films (not including the two Fantastic Beasts movies). Even if you found the time, you might notice that the movies still don’t capture all the details of the books.

Of course, making a Harry Potter movie is no easy feat. The magical world has a whole language of spells, potions, and magical artifacts to consider, and the cast is enormous. It’s no wonder the filmmakers had to cut some minor characters out. Still, die-hard Potterheads are pretty attached to even the most obscure players in the wizarding world.

Here’s a list of characters that totally should have made it to the big screen.

While viewers see a glimpse of Charlie in Harry Potter and the Prisoner of Azkaban, this Weasley brother disappears after his family vacation to Egypt. I think Charlie deserves more than a flash of a photograph. And yeah, okay, the books don’t say a whole lot about this Weasley brother either. It makes sense why he didn’t make it to the screen. I’m still too curious as to how they would cast and costume a dragon tamer/ex-Quidditch all-star who is also into darning. He might be the most interesting Weasley sibling, with or without movie representation.

Poor Winky. Fans who have only seen the movies probably think that the average house-elf is like Dobby and eager to be free from the family they serve. Winky shows us that “getting free” is not always a joyful experience for house-elves. It is troubling to read about Winky drinking her sorrows away after Barty Crouch dismisses her. Not only does Winky take the blame for the Dark Mark showing up at the Quidditch World Cup, but she also gets written out of the dang movie. Plus, without Winky, we only see male house-elves in the films. Stuff like this is precisely why we need SPEW, Hermione. 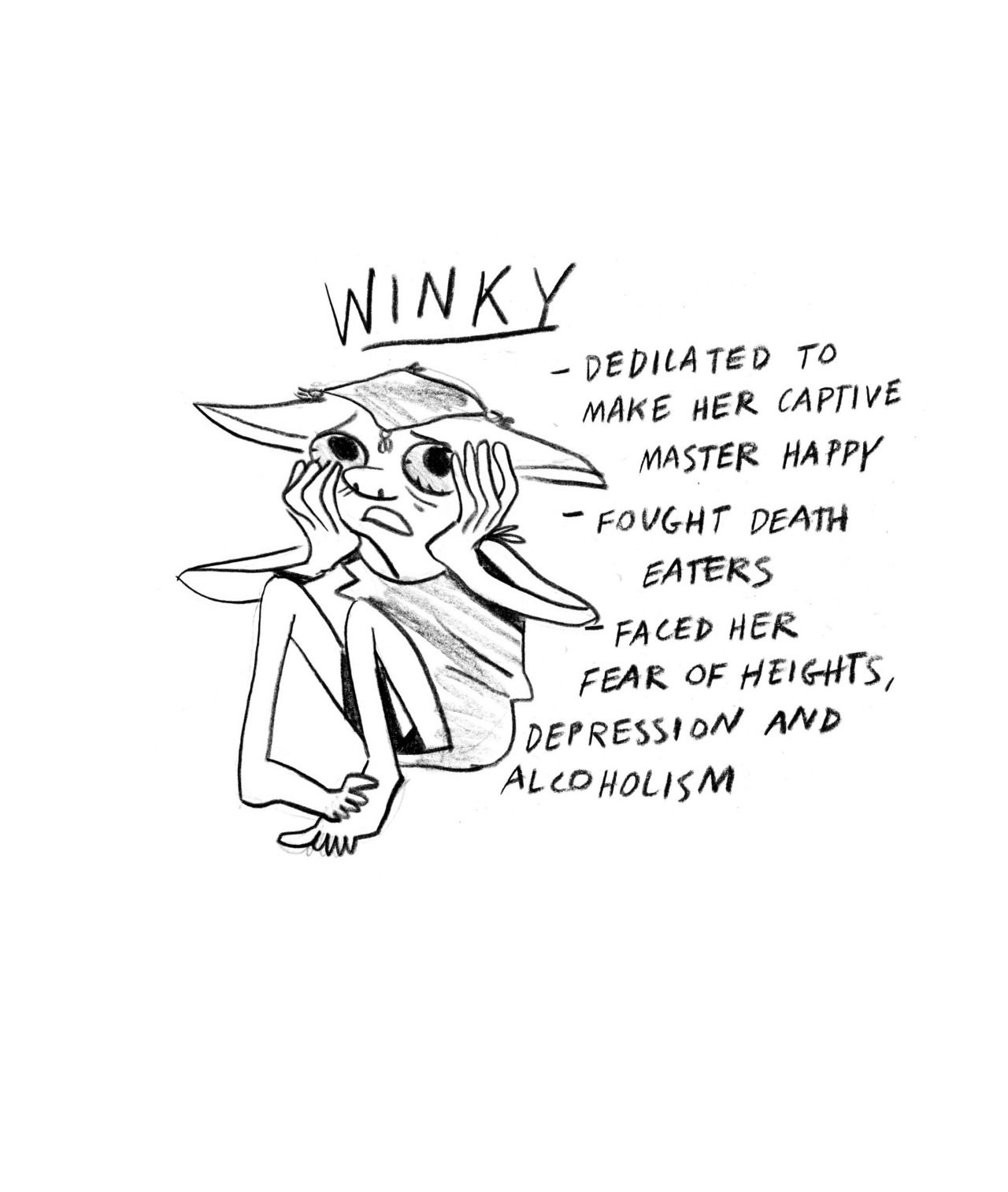 Like Charlie, Frank and Alice deserve more than the photo-flash they get in the movies. Sure, Neville tells us all about how Bellatrix tortured them to insanity in Harry Potter and the Order of the Phoenix. But movie-Neville’s monologue about his parents doesn’t make the same impact as their appearance in the book. When the trio runs into Neville and his gran at St. Mungo’s, they see firsthand how the war against Voldemort has impacted the Longbottom family. The part when Alice brings Neville a candy wrapper as a token of kindness shatters my heart every time I read it. The St. Mungo’s scene would be a total tearjerker in the film. Seeing Frank and Alice in the movie would also make Neville and Bellatrix’s meeting in the Department of Mysteries all the more frightening.

Dumbledore’s memory of Tom Riddle’s mother, Merope Gaunt, didn’t make it to the film version of Harry Potter and the Half-Blood Prince. Maybe the filmmakers cut her from the movie because her story is pretty twisted. Watching Merope’s father abuse her might not be the best in a film made for young viewers. Her coercion of Tom Riddle, Sr. through the use of love potion introduces some pretty adult themes too. However, learning about Merope’s relationship with Tom Riddle, Sr. helps us understand why their son was incapable of love. This plot point adds a level of wickedness to Voldemort’s backstory that makes him all the more despicable.

Like Fred and George, Peeves the Poltergeist believes in the magic of chaos, pranks, and mischief. He is a staple of life at Hogwarts and is the bane of Filch’s existence. I think the CGI department behind the Harry Potter movies could have brought to life some of Peeves’ hijinks mentioned in the books. Peeves also had a song for every occasion: Even the defeat of Lord Voldemort got a rhyme. The Harry Potter movies all have some comedic moments in them, but why not add more? Peeves would help to maintain the whimsical fun of the story when things get dark in the later books.

Which missing character from the Harry Potter movies do you think should have been included?