It’s Beginning to Look a Lot Like Christmas in “Hogwarts Mystery”, “Wizards Unite”

Christmas is coming, the goose is getting fat, and festive feelings are flying about more freely than flurries in Harry Potter: Hogwarts Mystery and Harry Potter: Wizards Unite! Pardon our alliteration, but we’re just a bit excited about these latest updates. They’re the marshmallows atop the cocoa that is wizarding world gaming, and you’ll definitely want to read all about them below!

Let us start this week with Hogwarts Mystery, which is never short on holiday cheer. The Jam City crew has outdone itself this season, with gorgeous bits of Christmas nearly everywhere you look. Players will be happy to know the trees and decorations have returned to the House common rooms, and the Great Hall has been decked. We'd pay a pretty Knut to be able to curl up on those sofas or step into that Hall for a hot breakfast on a wintry morning! This year, however, the holiday spirit has invaded other areas of the game as well. All outdoor spaces at Hogwarts - with the exception of the Magical Creatures Reserve and the Quidditch Stadium - are covered in a picturesque blanket of snow, with snow actively falling in some spots. As an added treat, Diagon Alley and Hogsmeade have also been given the Christmas treatment, with the latter now viewed at night! The glowing windows, wreaths, and garlands are enough to get you caroling on your couch!

Seriously - we can't do it justice, so just bask in these screenshots! 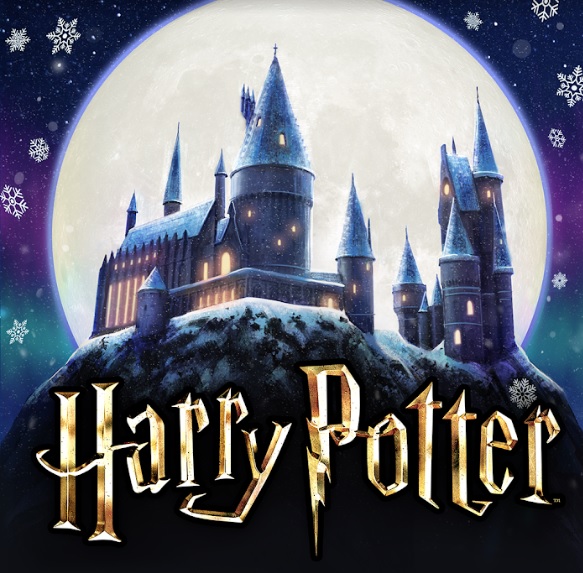 Hogwarts gets the snow globe treatment in this image from “Harry Potter: Hogwarts Mystery”.

The Whomping Willow looks unassuming and less deadly than usual in this snowy scene on the Castle Grounds. 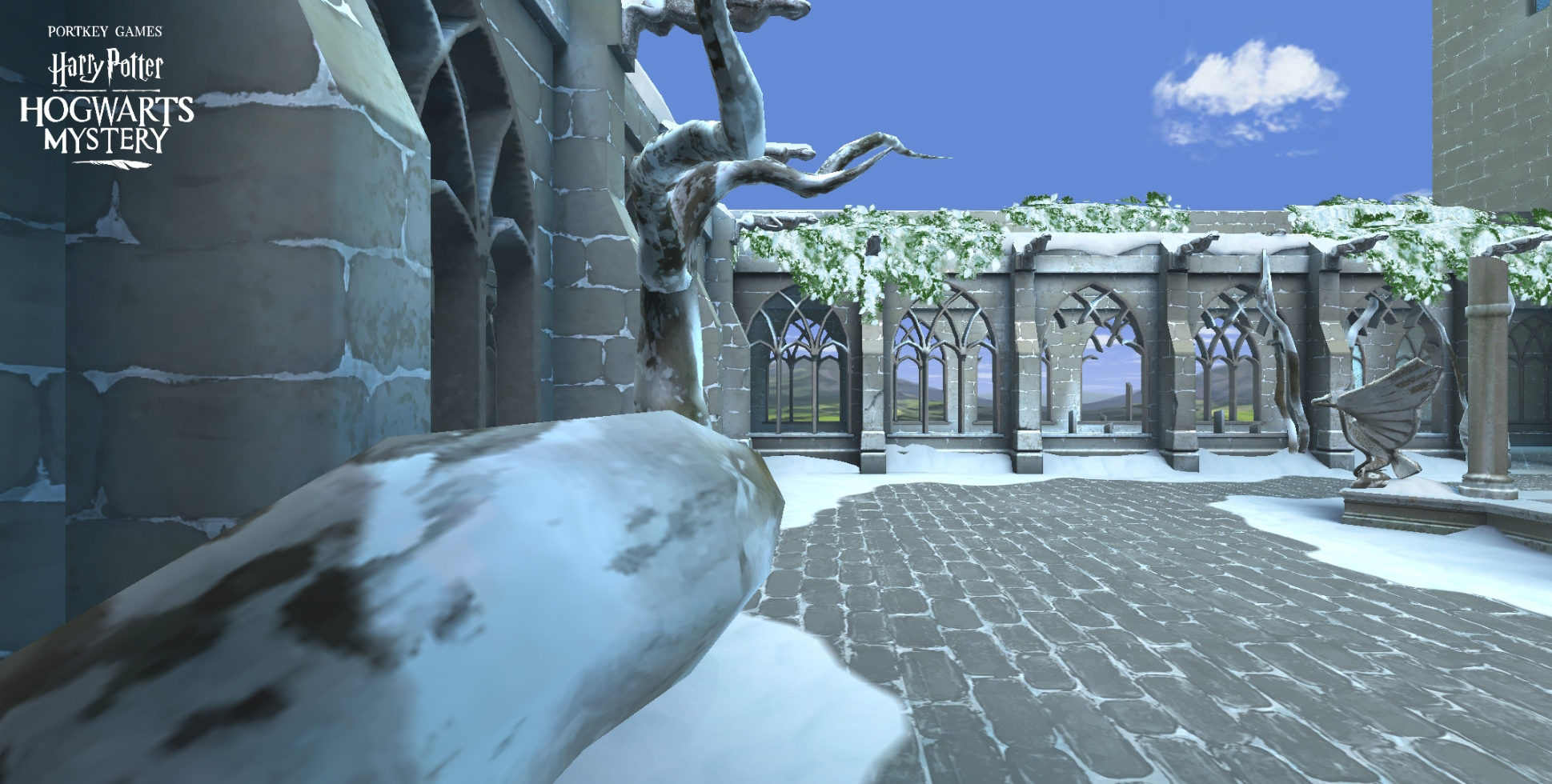 The Courtyard looks like a fun place for a snowball fight.

Diagon Alley is all wreaths and ribbons in the latest “Harry Potter: Hogwarts Mystery” update.

Unless you’re a snowman, heading into the Greenhouses on a cold winter day must be a toasty treat!

The Hogwarts Express is seen just past the glowing windows of the Three Broomsticks.

Honeydukes is undoubtedly a busy place at Christmastime!

Even the limited view of the outdoors from outside the Gryffindor common room features an idyllic snowy scene.

Hogsmeade is now seen by night with glowing windows and holiday decorations. 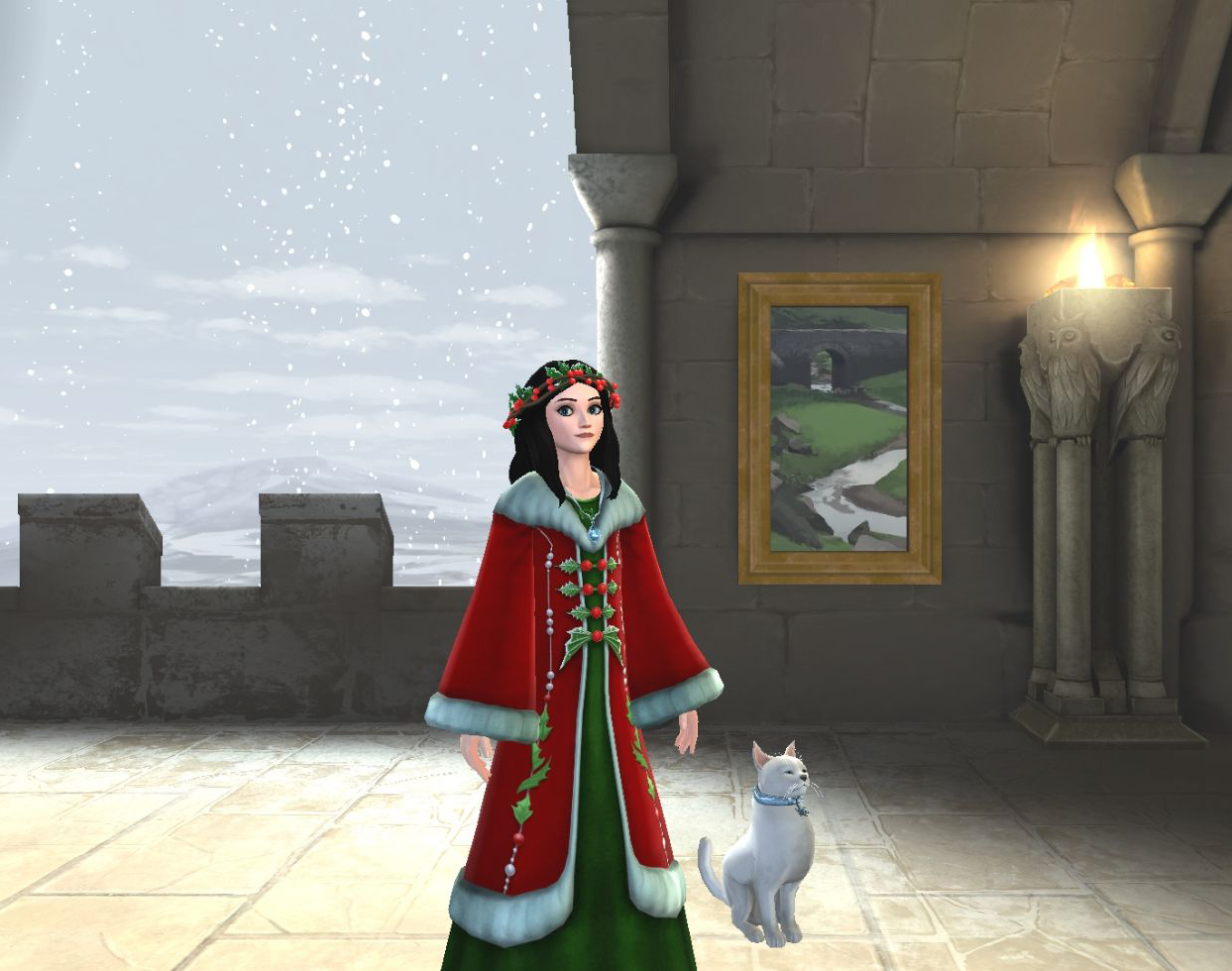 If you were successful in the latest full marks event, your character can be the definition of “festive” for the holidays!

The décor aside, the game has also begun a Twelve Days of Christmas at Hogwarts event.

A surprise giveaway featuring holiday-themed attire and in-game currencies will be gifted to fans every day via the game's social channels on Facebook, Instagram, and Twitter. Fans will also be able to enter the sweepstakes for a chance to win official Harry Potter merchandise.

All players can take advantage of the giveaways, while only players who have completed at least Chapter 7 of their first year will be able to participate in the side quests. Don't forget to share your antics online using the hashtag #HPHMChristmas, and be sure to work up your appetite - Jam City promises we're all "invited to a delicious End-of-Term Feast in the Great Hall before everyone goes home for the holidays."

In its latest newsletter, Hogwarts Mystery also teased that we could be taking a ride in a familiar blue automobile soon! In addition, there appear to be scads of Crup puppies (we can all agree to call them Cruppies, right?) in our future. Elsewhere in the game, nothing puts us in the Christmas mood quite like...

Or not. Either way, if you're progressing in the story, you've encountered everyone's favorite smooth-talking thief after relieving him of his clever disguise in Knockturn Alley, and we'll leave you this week with his warning.

Everyone can pretty much agree that it's just not the holidays without a calamity or two, but that seasonal spirit seems to help us soldier through anything. The same can't be said for Ron Weasley when it comes to the topic of his infamous dress robes.

You heard the man! We must put a stop to that lace and that dodgy little collar! Part 1 of the Christmas Calamity Brilliant Event is now underway in Wizards Unite, and you have until 2 p.m. (Eastern) December 10 to round up those special sparkly Traces. Out in the wild, you can expect to see the familiar purple beams of light emitting from Traces that include Brilliant Hagrid and Madame Maxime and Brilliant Hermione and Viktor. By completing special Event Tasks, you'll be able to add Brilliant Grumpy Ron (it's your own fault, bro) and a Brilliant Punch Bowl to your collection. Step into the Brilliant Portkey Portmanteaus to secure a Brilliant Yule Ball Programme, and complete Wizarding Challenges with event Runestones to snag the Brilliant Ice Sculpture of Castle.

Don't forget to pick up your free event bundle in the Diagon Alley Shop, and remember not to dawdle - once you've completed the assigned tasks, there will be bonuses on offer! Part 2 of the Christmas Calamity, meanwhile, will run December 17--24, and December's Community Day is set for December 14. In addition, Wizards Unite is also pointing players toward its Facebook, Twitter, and Instagram accounts, where it will soon be unveiling a 12 Tasks of Christmas event.

We'll go into more detail on those events in our next update! Until then, wands at the ready!

Celebrate the Holidays with “Twelve Days of Christmas at Hogwarts” filled with festivities, side-quests [sic], and prizes!

Who:
Jam City, a Los Angeles-based mobile games studio, in partnership with Warner Bros. Interactive Entertainment’s Portkey Games, a label dedicated to creating new Wizarding World mobile and video game experiences that place the player at the center of their own adventure, inspired by J.K. Rowling’s original stories.

What:
It's the holiday season, and Harry Potter: Hogwarts Mystery is inviting players to experience Christmas in the Wizarding World like never before! While it’s snowy outside, all of Hogwarts Castle including the Great Hall and House [c]ommon [r]ooms, as well as Hogsmeade, will be decorated for a cozy and festive atmosphere. All students at Hogwarts are also invited to a delicious End-of-Term Feast in the Great Hall before everyone goes home for the holidays.

From December 3 through December 14, Harry Potter: Hogwarts Mystery is launching Twelve Days of Christmas at Hogwarts featuring holiday-themed side-quests [sic] and events for players to win prizes and outfits! A surprise giveaway featuring holiday-themed attire and in-game currencies will be gifted to fans every day via the game’s social channels on Facebook, Instagram, and Twitter. Fans will also be able to enter the sweepstakes for a chance to win official Harry Potter merchandise. The Twelve Days of Christmas at Hogwarts campaign is open to all fans who follow the game’s social channels, while the side-quests [sic] are available to players who have completed Year 1 Chapter 7 and beyond.

Harry Potter: Hogwarts Mystery is calling all Harry Potter fans to share their holiday adventure with #HPHMChristmas. For more information on the giveaways and how to participate, please visit the rules page.

Background:
Harry Potter: Hogwarts Mystery is the only mobile game where any fan can live their fantasy of attending Hogwarts School of Witchcraft and Wizardry. In this award-winning narrative RPG ([r]ole [p]laying [g]ame), players participate in the iconic rites of passage of life at the school, from being [S]orted in Year 1 to becoming a prefect in Year 5, while exploring the secrets of Hogwarts and its grounds. True to life in the [w]izarding [w]orld, players advance through their seven years of schooling at Hogwarts, attending classes, learning magical skills, and forming friendships and rivalries with other students while investigating an original, unfolding mystery.

For more details on Harry Potter: Hogwarts Mystery and to connect with other fans, visit www.facebook.com/HPHogwartsMystery/ [or] www.twitter.com/HogwartsMystery, and for more information visit www.HarryPotterHogwartsMystery.com/.

What do you think about the new holiday updates? Let us know in the comments!