Along with a new year, awards season has arrived, heralded by the notoriously laid-back Golden Globes. And while no Wizarding World alumni took home an individual prize, several were among the ensemble cast or crew of winning productions. You can read all about that below, plus discover what new role will find Colin Farrell toting an umbrella and maybe even donning a monocle. That and Eddie Redmayne singing Christina Aguilera in a balloon suit. We couldn’t make that up. Castium Revelio!

You can check out a video of Heyman accepting the Best Motion Picture - Musical or Comedy award below, along with a photo of Zoë Kravitz (Leta Lestrange, Fantastic Beasts), whose Big Little Lies missed out but who made most of the best-dressed lists for the night.

On the day the first trailer dropped for Escape from Pretoria, starring Daniel Radcliffe (Harry Potter) and Ian Hart (Quirinus Quirrell), Arclight struck a major deal for the film's release. Rights to the picture have been sold to Signature in the UK and Momentum Pictures in the United States. It's set for a March 6 premiere in the UK, and we'll let you know as soon as a US date is announced!

Meanwhile, we still have Radcliffe's appearance in a mystery role in The Unbreakable Kimmy Schmidt interactive special to look forward to, and star Ellie Kemper recently spoke about her time on the set with the actor. You can watch that on SheKnows. The special is set to air on Netflix this year.

The American Association of Retired Persons (AARP) has released its Movies for Grownups Awards nominations, with Emma Watson's (Hermione Granger) Little Women and Heyman's Once Upon a Time in Hollywood up for Best Picture and Dame Maggie Smith (Minerva McGonagall) up for Best Supporting Actress for Downton Abbey. Those awards will be handed out on January 11 in Beverly Hills, California, and broadcast January 19 on PBS.

If you've been contemplating joining the vegan ranks, this month just might be the perfect time to give it a whirl. Several celebrities, including Evanna Lynch (Luna Lovegood), recently banded together to urge Brits (and everyone!) to give up meat and dairy during the month of "Veganuary" in order to help fight climate change. If you're interested, you can sign the pledge.

We have a date with The Batman! Well, we wish, but we do have a date that Matt Reeves' new Dark Knight film - starring Robert Pattinson (Cedric Diggory) as Batman and Kravitz as Catwoman, and with Colin Farrell (Percival Graves, Fantastic Beasts) in talks to play the Penguin - will hit theaters: June 25, 2021.

And while we say Farrell is still in talks because there hasn't yet been an official studio announcement, Reeves essentially made one of his own Monday on Twitter. Looks like the Irishman will be our next Oswald Cobblepot!

That seems further confirmed by a few photos from a lucky guy sitting in a London office. As Stellan Skarsgård pointed out during the Golden Globes, one can generally spot Farrell's eyebrows 20 miles away, and that certainly looks like them to us!

Is this London or Gotham.....?
Filming The Batman 🦇 outside my offices this morning! 👍 @empiremagazine pic.twitter.com/Mszt5wLcYG

Meanwhile, Pattinson has a very specific definition of superheroes, which he shared recently on Sunday Today with Willie Geist.

Batman is not a superhero. It's weird. I always balk at it. I'm like, 'It doesn't count. You need to have, like, magical powers to be a superhero.'

So be on the lookout for the new Harry Potter spinoff: "The Adventures of Expelliarmus Boy and His Sidekicks, Library Card Crusader and Ginger Avenger"! Kidding, of course, but seriously... the Ginger Avenger would be a hit. Pattinson also balked at the idea that his new role might send him spiraling back into Twilight-era heartthrob status, saying, "I'm hoping it won't be people hanging out outside my place. I just think I'm kinda boring and old now."

Anticipation continues to build for Daniel Craig's final turn as James Bond in No Time to Die, and the first trailer for the picture was recently released. You can view it below, and watch for Ralph Fiennes (Lord Voldemort) bringing sarcastic swagger to the role of M on April 2 in the UK and April 10 in the US.

We're also just a few days away from the premiere of Dolittle, starring Robert Downey Jr., so let us celebrate with the film's final trailer and a rather adorable set of posters featuring Downey posing with some of his animated animal costars. You can check out shots of Downey with Fiennes's character, Barry the Tiger, and Emma Thompson's character, Polynesia the Parrot, below. Also featured in the film are Frances de la Tour (Madame Maxime) as Ginko-Who-Soars, Ralph Ineson as Arnall Stubbins, and Jim Broadbent (Horace Slughorn) in a still-unnamed role. 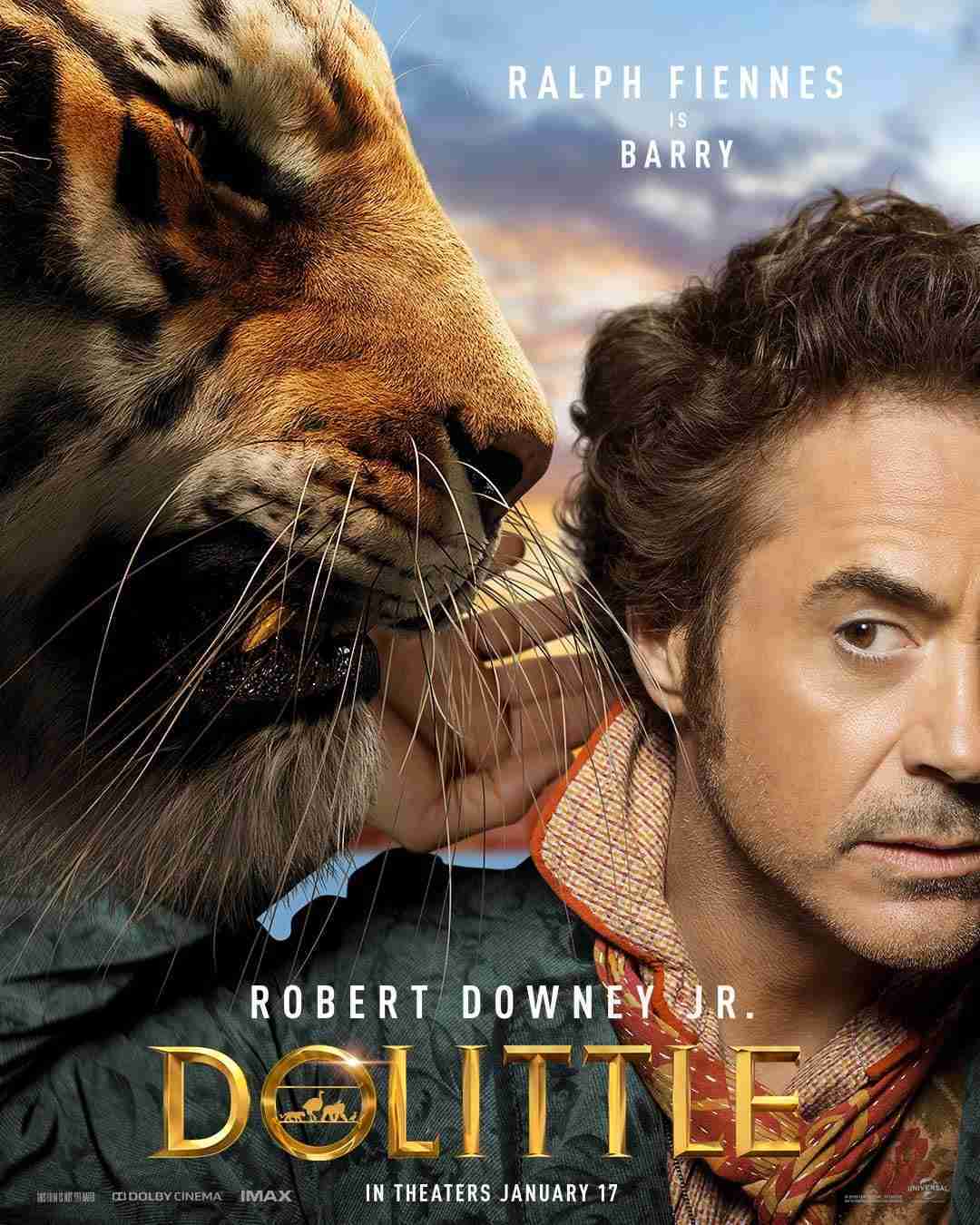 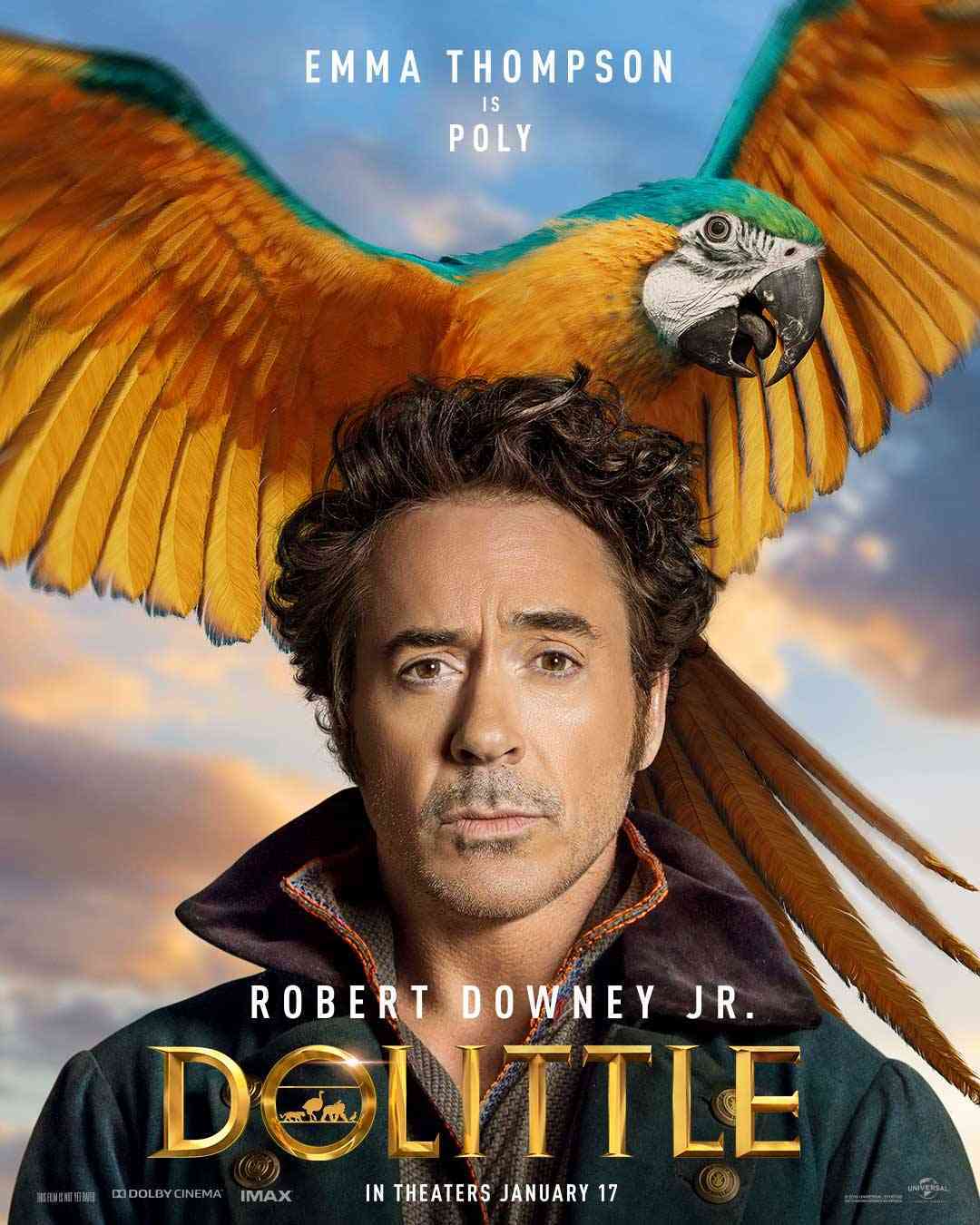 Fiennes is additionally featured in a new book from the New York Times, which features never-before-seen black-and-white portraits of a variety of influential entertainers, artists, politicians, and other notables. The book is available for purchase online.

Imelda Staunton (Dolores Umbridge) will soon be taking on the fantastically iconic role of Dolly Gallagher Levi in a new West End production of Hello, Dolly!, which will begin a 30-week limited engagement on August 11 at the Adelphi Theatre in London. Priority tickets are already on sale. Also, if you'd like to reminisce about some of Staunton's other epic theatre performances, BroadwayWorld has you covered. In further theatre news, Staunton's husband, Jim Carter, will be screening the 2014 film Pride, followed by a Q&A, on February 23 at the Kiln Theatre in London, and he'll be joined by Staunton and Bill Nighy (Rufus Scrimgeour). You can purchase tickets to that event on the Kiln's website.

Staunton and Carter also joined fellow residents of West Hampstead, England, last month to switch on the Fortune Green Christmas lights, and Carter had a hilarious quip for the youngsters who crowded around to greet the pair: "Well done, kids, for standing so close to Dolores Umbridge." Well spotted, Mr. Carter! 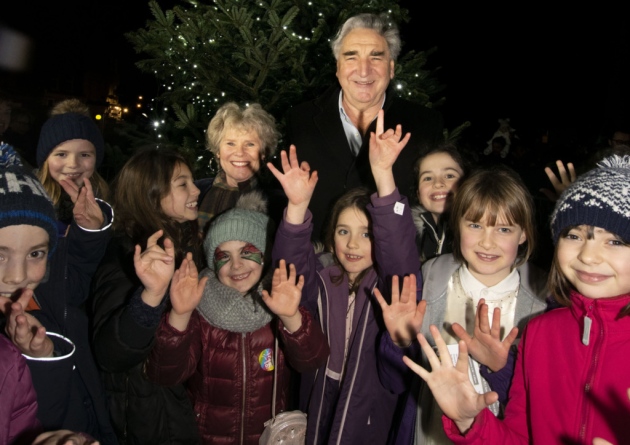 Production is currently underway on a new indie drama from first-time feature director Frank Kranz (Topher Brink, Dollhouse). Kranz also penned the script for Mass, which Deadline Hollywood reports takes place in the aftermath of a violent tragedy that affects the lives of two couples in different ways, and Jason Isaacs (Lucius Malfoy) has joined the cast. We'll keep you posted on that project!

The Dragonheart franchise is making its return in February with prequel Dragonheart: Vengeance, featuring the vocal talents of Helena Bonham Carter (Bellatrix Lestrange). Bonham Carter will be voicing dragon Siveth in the film, which will be released on Blu-ray, DVD, digital, and on demand on February 4. You can check out the trailer below, which features a few behind-the-scenes glimpses of the actress at work.

If you've been all wrapped up in your Disney+ cocoon for the past few months, take a break and head back over to Netflix to check out a familiar voice in the new animated series Fast & Furious: Spy Racers. Luke Youngblood (Lee Jordan) brings Frostee Benson to life in the series, and you can check out the trailer and a few photos of Youngblood from the show's California premiere below.

You may also have recently been fangirling or fanboying - along with many, many others - to Season 1 of Netflix's The Witcher, which features Anna Shaffer (Romilda Vane) in the role of Triss Merigold. And while Triss didn't get quite the attention some were hoping for in Season 1, showrunner Lauren Hissrich tells ComicBook.com that more is in store for the character.

You will see Triss again, but the most important thing, and I love this question because there have been a lot of questions, actually, about the choices that we make to change things in the adaptation, and what I've always said is there is always a reason to do it. We're not doing it for our egos. We're not doing it because it's easier. What we're trying to do is set up the appropriate building blocks for our story, so there is stuff that I know that I want to happen to Triss in Season 1 and Season 2, and, God willing, beyond that. So I need to make sure that that story is set up appropriately, and the best way to do that was actually to bring her and introduce her in a story that she's not in in the novel.

If you tuned in to the fall finale of How to Get Away with Murder, you'll have noticed one minor detail: Wes Gibbons, played by Alfred Enoch (Dean Thomas) was apparently only mostly dead. That means we'll apparently be seeing Enoch's character in the show's six-episode "farewell event", slated to run April 2–May 14 on ABC.

Lastly in Harry Potter alumni updates, people all over the Internet have been expressing widespread shock over the last few weeks about spotting some franchise favorites in other projects - namely, Nat Tena (Nymphadora Tonks) as Twi'lek Xi'an and Shirley Henderson (Moaning Myrtle) as the voice of Babu Frik in The Mandalorian, and Harry Melling (Dudley Dursley) as Sysselman in His Dark Materials. But, of course, readers of Casting News weren't the least bit surprised, since we told you all of that months ago. See? When you read MuggleNet regularly, you get to be smug in front of all your friends.

Jude Law (Albus Dumbledore) fans, brace yourselves: Only five days remain until the premiere of The New Pope on HBO. Law's latest romp as Pope Pius XIII hits screens January 13, and here's an official season synopsis to tide you over.

Following his sudden heart attack, Pope Pius XIII (Jude Law) lies in a coma while his followers fervently pray for a miraculous recovery. As the threat of terrorism and the potential risks of Pius's idolatry loom, Secretary of State Cardinal Voiello (Silvio Orlando) is pressured to bring a new pope to power and, with the conclave at a deadlock, makes a hasty move that throws the Church into even greater chaos.

Meanwhile, Law's on-screen nemesis, Johnny Depp (Gellert Grindelwald), is hitting the road this year with the Hollywood Vampires for a European tour, and you can find more information on that in the post below.

The Walking Dead will be resuming its tenth season on February 23 on AMC, and according to ComicBook.com, Samantha Morton (Mary Lou Barebone) is promising plenty of "nail-biting" moments.

[The back half] gets incredibly heightened, riveting, and just really nail-biting. Things happen that you don't expect to happen. I didn't. A lot of the things I read in the script I was very shocked and surprised at.

And finally, if you missed Eddie Redmayne's (Newt Scamander) appearance on The Late Late Show with James Corden last month, we simply aren't going to permit you to live your life without seeing the actor and host delivering singing balloon telegrams to unsuspecting Los Angeles, California, residents.

Be honest… Eddie Redmayne just moved you to tears, right? Of laughter, of course, but tears nonetheless! Until next time, all together now… “DowntownAbbeyHarryPotterDowntonAbbeyHarryPotter!”