Winter is fully upon us! Since we Muggles/No-Majs lack the ability to perform warming charms to keep out the cold, here are some ways to spice up hot cocoa based on characters in the wizarding world. Make some Cauldron Cakes to brew up some heat in the kitchen, and nibble on them while you sip your cocoa to give yourself a warm hug.

Albus Dumbledore has cocoa with English toffee syrup and plenty of marshmallows, since he has a sweet spot for all things saccharine.

Harry Potter channels his Butterbeer appreciation through cocoa with caramel and butterscotch syrup with whipped cream.

Hermione Granger has cocoa with sugar-free peppermint creamer or syrup. When she’s at Hogwarts, she’ll add a candy cane as a stir stick since her dentist parents aren’t around. 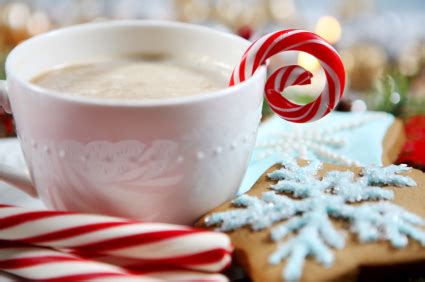 Luna Lovegood’s white chocolate and raspberry syrup cocoa has a pink hue to match her Spectrespecs.

Remus Lupin makes a double chocolate cocoa by adding chocolate syrup to a packet of hot cocoa, since after all:

Seamus Finnigan drinks his cocoa with white chocolate and Irish crème creamer or syrup while reminiscing about Ireland’s victory at the 422nd Quidditch World Cup.

Minerva McGonagall’s cocoa has no extra sauces or syrups but two large marshmallows. It is served in a tartan-patterned mug with a biscuit from her tin from the infamous scene:

Mrs. Figg has cocoa with fig syrup, mostly for the pun.

Newt Scamander takes his ethically-sourced cocoa with a dash of cream for an extra smooth flavor.

Tina and Queenie Goldstein make cocoa with lots of marshmallows and chocolate shavings on top for extra chocolatey goodness. Serve with a pastry from a local bakery in homage to our favorite No-Maj!

The Weasleys make cocoa by melting milk chocolate into whole milk before pouring it into the biggest mugs in the house, and they put in a double serving of whipped cream before sprinkling lots of cinnamon on top to make the house smell nice too. (Optional: Serve alongside a meal with seconds and thirds.)

Gryffindors take pride in their cocoa made with raspberry syrup, whipped cream, and caramel sauce drizzled on top to make the colors match their scarves.

Hufflepuffs make a toasted marshmallow syrup, marshmallow, and whipped topping cocoa. They’ll make s’mores in their fireplace. After all, why should chestnuts be the only thing roasting on an open fire?

Ravenclaws like hazelnut syrup and chocolate whipped cream to get as close to liquid Nutella as possible.

Slytherin cocoa has dark chocolate and mint creamer or syrup. Because they appreciate the finer things, they’ll add a chocolate-covered spoon as a stir stick.

The milk/white/dark chocolate can be done either by getting a sauce or syrup or by melting some of the desired flavors of chocolate bars in a pot (it’s easier to melt chocolate in a pot than the microwave).