Warner Bros. Studio Tour London – The Making of Harry Potter has added to its award collection by receiving the EuroShop RetailDesign Award 2020, becoming one of three winners out of a shortlist of 33 nominees from across the world. 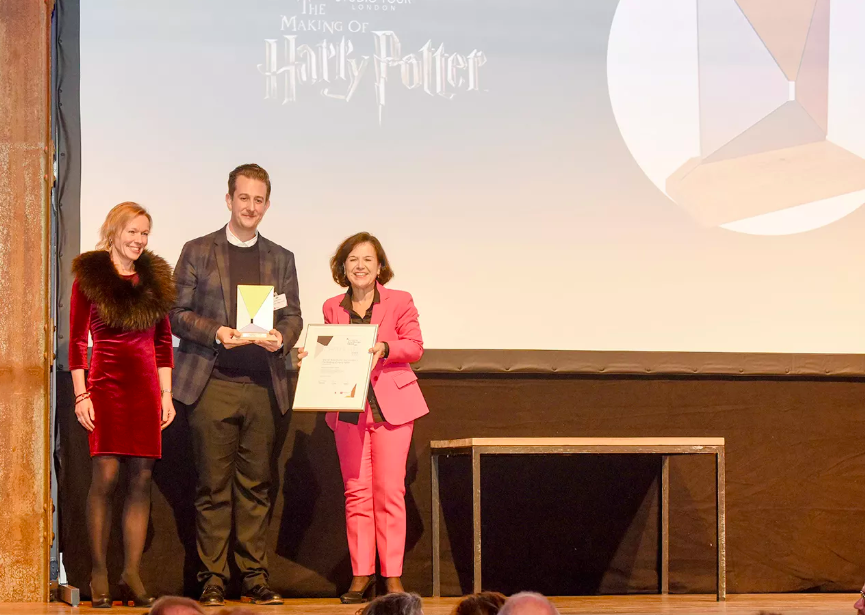 The RetailDesign Award recognizes commitment to conveying a story to customers through excellence in design, appeal to a target audience, and visual merchandising. At an award ceremony on February 19 in Düsseldorf, Germany, Lumsden (the design company behind the retail and dining experiences at the Studio Tour) was commended for its theming across each section of the main store, as well as its use of special effects.

The “Gothic” look typical of the Harry Potter films is reflected in the store design as well. The atmosphere in the Dark Arts, where you can buy a shrunken head or a Horcrux, is sinister, while the sweets shop Honeydukes is bright and colourful; the division of the store into thematic zones allows visitors to orientate themselves intuitively. Special effects, including “real” goblins that count gold coins, make the magic moments unforgettable.

We are thrilled to announce that Lumsden have won the Euroshop #RetailDesign Award 2020 for the shops and cafés at #WarnerBros Studio Tour London – The Making of #HarryPotter To find out more go to https://t.co/yxOUV0zLkB pic.twitter.com/T8cy224cHs

Lumsden was also recognized for its design of the dining experiences at the Studio Tour, which shows further commitment to immersing fans of the Potter series in the magic of the wizarding world, even when they have stopped to get a bite to eat.

The studio’s new culinary offerings include restaurants that are fully part of the Harry Potter experience, such as the Chocolate Frog Café, where you can buy the frog-shaped chocolates that appear in the film series, and the adjacent Food Hall, in which floating candles are part of an illuminated night sky. Original props from the Harry Potter films bring the entire studio to life.

The Hub Café, the Chocolate Frog Café, and the Food Hall were opened in 2019 and were completed alongside an expansion of the Studio Tour’s main store. James Dwyer, Lumsden’s design director, has previously spoken about how important commitment to guest experience was when designing the dining experiences:

For a project like this, it’s important to understand that storytelling doesn’t start or stop with the tour. It starts the moment the visitor arrives and permeates all spaces from café to retail and beyond.

Congratulations to Lumsden and Warner Bros. Studio Tour – The Making of Harry Potter for winning this prestigious award!