Peeves the Poet: Peering at the Poetry of “Potter”

To celebrate World Poetry Day, we need to look no further than Peeves, who is perhaps the poet laureate of Hogwarts. His rhymes may not be the most elegant or sophisticated, but they certainly speak to his mischievous character and give us some unforgettable moments of lighthearted humor. 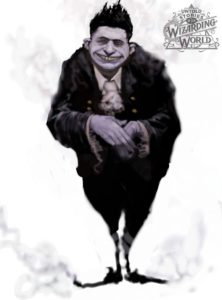 From a critical standpoint, perhaps Peeves is not the most technically brilliant poet in the wizarding world, but he makes a great impact all the same. His works are structured around rhymes, utilizing rhyming couplets or even internal rhyme to give his poems the flair and spunk that we know him for. His works draw from the strong confidence in his identity as Hogwarts poltergeist, living up to his name with his teasing rhymes. Perhaps his poetic style is simpler than other poets at Hogwarts, but his fun approach to rhyming gives us lines like “Voldy’s gone moldy,” so I’m not complaining.

Hogwarts is a hotbed for poetry, sporting everything from cryptic riddles to Ginny’s Valentine’s Day message. Some of the greatest examples of Hogwarts poetry are challenges that Harry must face, both in reaching the sorcerer’s stone and getting past the sphinx in the third task of the Triwizard Tournament. These riddles are perhaps more complex poems than what we see from Peeves, using a wider array of techniques – like rhetorical questions – and definitely being more impressive in their length and substance.

First think of the person who lives in disguise,
Who deals in secrets and tells naught but lies.
Next, tell me what’s always the last thing to mend,
The middle of middle and end of the end?
And finally give me the sound often heard
During the search for a hard-to-find word.
Now string them together, and answer me this,
Which creature would you be unwilling to kiss?” (GOF 629)

However, Peeves definitely has the edge in terms of repertoire, constantly sporting different rhymes and limericks, even adding dance routines to vary his performances. Poetry is the way that Peeves expresses himself best, his acidic wit proving that he’s more than the Hogwarts menace.

He kept popping up in the crowded corridors singing ‘Oh, Potter, you rotter …’ now with a dance routine to match.” (COS 235)

Despite the impression that Filch may give, Peeves and his poetry are not always met with disdain or irritation. Peeves himself forms a fundamental part of Hogwarts as irreplaceable as the moving staircases or living portraits. And his character and poetry, while not always well received, are appreciated from time to time. For example, Remus Lupin seems to enjoy the alliteration of “Loony Loopy Lupin” given at his expense; although, rather than a standing ovation, Peeves ends up receiving bubble gum up his nose. It is really the readers who value Peeves’s contributions, adding lighthearted moments of silliness to otherwise bleak situations. Ron’s reaction to Peeves’s celebratory rhyme at the end of the Battle of Hogwarts reflects on this quality of Peeves’s poetry: “Really gives a feeling for the scope and tragedy of the thing, doesn’t it?”(DH 746).

Peeves is a poet who is perhaps quite underappreciated at Hogwarts. His poetry speaks to a much more humorous and lighthearted side to life at Hogwarts, which is at least very much appreciated by the readers. Then again, perhaps the students of Hogwarts are just glad that he’s showering them with rhymes rather than ink, water balloons, or Dungbombs.