Those of you who tuned in to Tom’s recent live chat with Jason Isaacs, the ever-intimidating Lucius Malfoy and Tom’s real-life buddy to this day, may remember his passing remark about a road trip flick he filmed in Oklahoma last year. Good news: the wait is over!

Video-on-demand company Gravitas Ventures has announced that Tom Felton’s new family comedy, Braking for Whales, will get a VOD/digital release on April 29. The Boston Film Festival award-winning picture, originally titled Whaling, will also be available for preorder on iTunes as early as April 24. 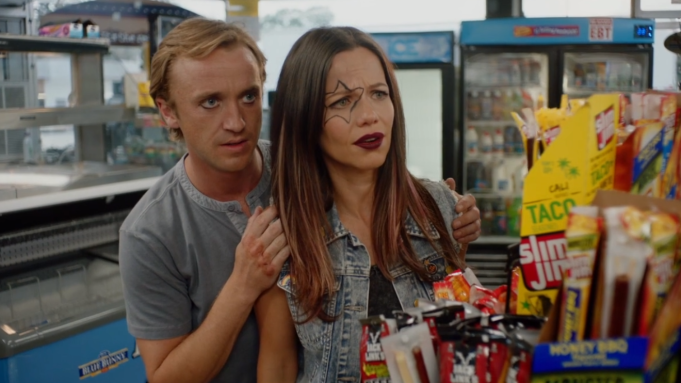 Tom Felton and Tammin Sursok in Braking for Whales

Tammin Sursok (Pretty Little Liars) as Tom’s on-screen sister sums up the premise in the trailer: “An absurd road trip to bury your mother’s ashes in the body of a whale with your brother who hates you. Now, that is funny!” It is funny and very intriguing. Luckily, there’s no need for us to drive across the country since the film will be available for digital download in just a couple of days.

Ironically, while the promise of a road trip movie is all the more tempting for us fans now that we are stuck in quarantine, this is the story of two estranged siblings confined in a claustrophobic situation and having to confront their issues while looking for a whale in a landlocked state. Cue drama. Tom plays Brandon, who embarks on the journey to fulfill their mother’s eccentric final wish with his rebellious, feisty, and troubled sister, Star. Forced to team up, these dysfunctional siblings have to come to terms with each other and themselves along the way. 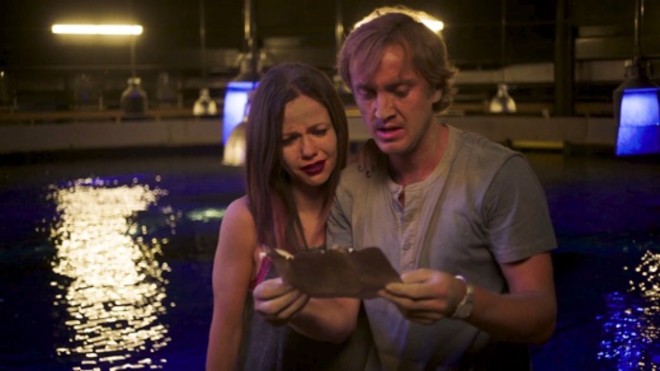 Braking for Whales is Sean McEwen’s debut feature film as a writer and a director. Tom’s other costars include Wendi McLendon-Covey (The Goldbergs), David Koechner (Anchorman: The Legend of Ron Burgandy), and Austin Swift (Live by Night), all of whom are sure to bring A+ comedy to our digital home screens in just a couple of days. Check out the trailer below.

While his sister is the outspoken type, Tom’s character seems to wrestle with an added layer of secrecy: Brandon may be gay but in the closet. We see Tom share a pretty sizzling kiss with a guy in the trailer, but fair warning: It seems he also has a physical altercation with him in the same scene – whether before or after the kiss, we don’t know. Given LGBTQIA+ representation’s trigger-happy history with story lines that entangle romance with aggression, often unnecessarily, it is hard to be optimistic about this plotline having a happy ending, but we don’t have long to wait to see the movie for ourselves. Hopefully, the actual scenes will prove our pessimism wrong.