When a woman from Buckinghamshire, United Kingdom, discovered three copies of Harry Potter and the Philosopher’s Stone in a dumpster 12 years ago, she had no idea they were rare first editions.

The schoolteacher, who is now 65 years old, discovered the books in a dumpster that was outside of the school where she was working. The school was clearing out its library in preparation for a routine inspection by the ministerial body for school standards in England, known as Ofsted.

The Potter books were thrown away because they were no longer in pristine condition.

They’d been well-read [sic], and the school always ensured its library was pristine for Ofsted inspections.

The rescued books, two paperbacks and one hardback, are currently up for auction listed by Hansons Auctioneers. 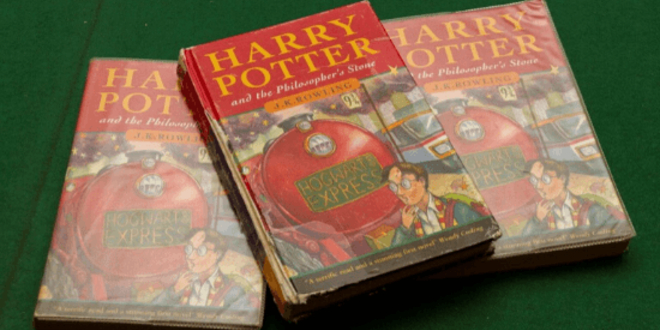 The three first-edition copies of “Harry Potter and the Philosopher’s Stone” were found in a dumpster 12 years ago.

The teacher told the auctioneers that she also believes the school had another nine copies of first-edition Potter hardbacks, but she does not know what happened to them.

I think the school originally had 10 Harry Potter hardback first editions. I don’t know what happened to the other nine.

The teacher, who wishes to remain anonymous, was watching TV one day when she saw an interview with the owner of Hansons Auctioneers about another Harry Potter first edition.

Last year we were watching a TV interview with Charles Hanson, owner of Hansons Auctioneers, about the sale of a Harry Potter first edition, which sold for thousands at auction, and decided to get in touch.

She already knew that her Potter books might be worth a good amount of money after her son decided to investigate their potential value four years ago.

A London business offered £4,000 for one of the paperbacks there and then, but they just went back into the loft.

However, after seeing the interview on TV, the teacher enlisted the help of the auctioneers to find out the current value of the books.

Speaking about the rare hardback edition, book expert Jim Spencer at Hansons Auctioneers said they “are as rare as hens’ teeth. They’re the holy grail for collectors.”

When Philosopher’s Stone was first published, there were only 500 hardback copies printed. 300 of them went to schools and libraries while the others were sent to private book shops.

You may have heard of first-edition Philosopher’s Stone hardbacks going for a lot more. Spencer explained that his estimate of the schoolteacher’s hardback accounts for the binding being slightly damaged.

The reason why I’ve put what may seem like a humble estimate of £8,000-£12,000 on the latest copy is because the binding is damaged. Internally it’s very good, though, and could surprise us.

In March of this year, a special first edition of Philosopher’s Stone, which included a special handwritten note by J.K. Rowling, fetched an impressive £118,000 ($146,026).

These magical first editions of Harry Potter and the Philosopher’s Stone have sold, with the hardback edition going for more than double the original estimated price.

The anonymous seller said, “To say I’m pleased is an understatement.”

Jim Spencer of Hansons Auctioneers said, “It was marvellous to see the Harry Potter books do so well and spark such intense bidding.”