UPDATED: Going, Going, but Not Quite Gone: First Edition of “Philosopher’s Stone” Is Expected to Sell for Tens of Thousands

The auction has ended and the lucky winner walks away with something special. A first-edition copy of Harry Potter and the Philosopher’s Stone sold at Bonhams auction house for an “impressive” £118,000 (US$144,786). Despite the presale estimate ranging between £70,000 and £90,000, Matthew Haley, Head of Bonhams Fine Books and Manuscripts Department, says it’s no surprise the book sold for this price.

This unique copy of the highly desirable rare first edition of Harry Potter and the Philosopher’s Stone really was a little piece of Harry Potter history. I’m not surprised that it attracted such interest and achieved such an impressive price.

We’ll have to wait anxiously until another first-edition book is uncovered. Until then, congrats to the new owner of the inscribed first edition of Harry Potter and the Philosopher’s Stone.

In recent months, we’ve seen first editions of Harry Potter books auctioned to whoever is willing to spend a pretty penny. Yet another one is going up for sale in March. Other books before this one have been near mint condition or signed, but this one has something a little more special – a note from J. K. Rowling.

When the author was unpublished and trying to sell the idea of Harry Potter to the world, an office manager by the name Bryony Evens helped put Rowling on the map.

Evens worked at a publishing company run by Christopher Little. At the same time, Rowling was trying to introduce Harry to the world. Despite the company not having published children’s books, Rowling sent Little the first three chapters of her book anyway. Unfortunately, the manuscript “was destined for the slush pile and rejection,” but Evens insisted that Harry Potter be given a chance, and the rest is history. Rowling later wrote Evens a note of thanks on the dedication page.

to Bryony – who is the most important person I’ve ever met in a signing queue & the first person ever to see merit in Harry Potter. With huge [underlined 4 times] thanks. J.K. Rowling 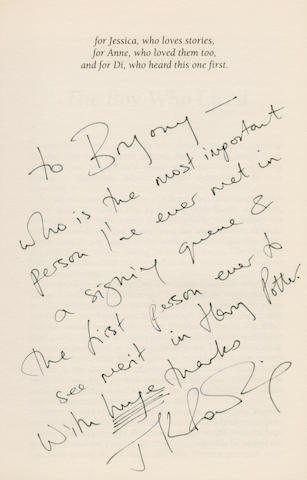 Harry Potter and the Philosopher’s Stone was rejected by 12 publishers before Rowling reached Little’s company. Eventually, in 1996, the book was sold to Bloomsbury for a whopping £2,500 (about US$3,200). Only 500 hardcover first editions of Philosopher’s Stone were sold.