Harry Potter fandom tends to overlap with other fandoms. It’s unsurprising to find out that a Potter fan also enjoys other fantasy or science fiction franchises, like Star Wars, Lord of the Rings, superheroes, or Disney fairy tales. These stories share epic quests, magic or supernatural powers, and battles to save the world. But I am often pleasantly surprised to meet fellow Potter fans who also just so happen to share my love of musical theater. Whether or not they were raised going to Broadway shows in New York City or another major theater hub, there seems to be a plethora of Potter fans who grew up listening to Broadway soundtracks, attending local productions, and performing or otherwise participating in school shows. The success of Team StarKid’s A Very Potter Musical is a testament to the popularity of the intersection of musicals and Potter.

Is this mere coincidence, or is there something else at play? Genre musicals like Wicked or Camelot have an obvious appeal to avid readers of a series about wizards and witches, but the same can’t be said of Chicago or Hamilton. Or can it? 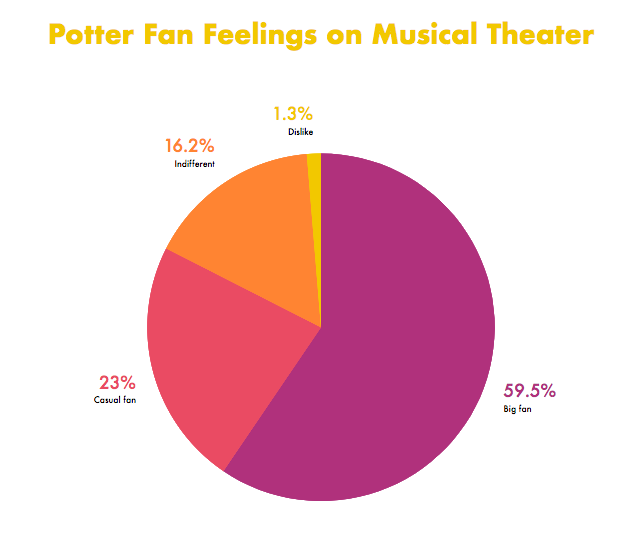 Many respondents thought that the overlap between Potter and musical fans wasn’t necessarily about the content or genre of Potter specifically but narrative more generally:

I feel like people who enjoy reading fiction in general tend to like theater. When the mind is always craving stories, it’s a great place to get it. Not only that but both reading and live theater ask something of the consumer. There are places that have to be filled in with the imagination, so they have that in common as well.

Personally, I like musicals and books because they both let me escape reality while also feeling like I’m in a reality.

For some, the appeal lies in a sense of togetherness:

Theater, and especially musical theater, is such a singularly unique experience. There’s such an energy transfer between the audience and actors that is not replicated in any other kind of storytelling. An audience is a part of a play/musical in a way that you can’t be a part of anything else. It’s beautiful. Plus, we’d all like to break into emotional song sometimes, wouldn’t we?

I also love the community that breeds from musical theater. When you do a show, you develop a bond with your fellow cast/crew members, and when you are a fan of a show, there’s the community of people who also really like it. To me, that’s the thing that overlaps between the musical fandom and the Potter fandom.

Respondents also pointed to the world-building of musicals in the use of dance, lighting, staging, and costumes. While J.K. Rowling could flesh out the wizarding world in detail through thousands of pages, musicals rely on alternative methods to pack all that atmosphere into a couple of hours.

My own theory concerns a subconscious recognition of a sense of fantasy portrayed in musicals. No matter the content of a musical, the very medium holds an inherent element of fantasy in its format and concept. While there are certainly small-scale domestic dramas with onstage bands and minimal sets, musical theater is quite often the realm of stories of epic proportions with large ensembles, full orchestras, complex moving set pieces, and flashy costumes whether the setting is the roaring ’20s, revolutionary France, Oz, or Oklahoma and whether the characters are performers, animals, royalty, businessmen, or high school students.

The idea that an entire room could break out into spontaneous song and dance – all knowing the tune, lyrics, five-part harmony, and choreography – is a fantasy in and of itself. Having a method of expression available to us that is beyond our usual possibilities and immediately understood and joined by those around us seems like a superpower. Every mundane conflict or conversation has the potential to become magnificent as it turns into a sweeping ballad or an energetic production number. As sung in Pippin, it certainly feels like “We’ve got magic to do, just for you…”

Are you a Potter fan who loves musicals too? Do you see any similarities between the two as to why they appeal to you? Is it about something unique to Potter, fantasy more broadly, or just a love of stories? Or do musicals not hold the same magic for you? Let us know in the comments.