Is Moaning Myrtle the Most Tragic Character in the “Harry Potter” Series?

Everyone is aware of “Miserable, moaning, moping Myrtle,” (CoS 54) the annoying ghost that haunts the second-floor girls’ bathroom at Hogwarts. We know that she was killed the first time that the Chamber of Secrets was opened, but what all do we know about her death? And possibly even more depressing, what do we know about her life? In both life and afterlife, I view her as one of – if not the – most tragic character in the Harry Potter series. Here’s why: 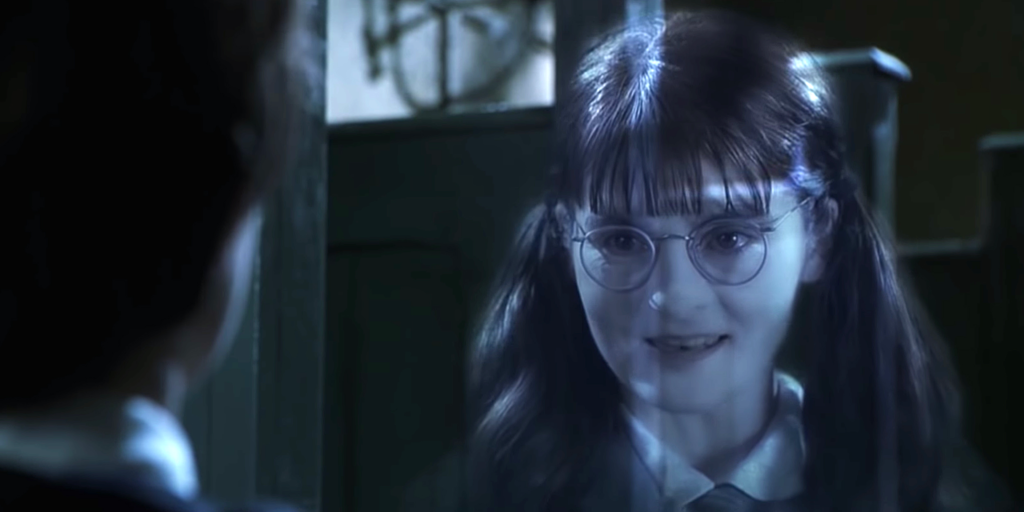 She was just 14 when she died.

Myrtle’s life was cut shockingly short when she was killed by the Basilisk at Tom Riddle’s command. It’s not surprising to me that she stayed on as a ghost. She was so young and hadn’t had the chance to experience much of life. In the wizarding world, ghosts are often either afraid of death or have a strong connection to the places that they haunt, and it seems likely to me that both apply to Myrtle. Additionally, we are told that she remained as a ghost in order to haunt Olive Hornby, the Hogwarts student that bullied her on the day of her death. After the Ministry stopped her from stalking Olive, Myrtle returned to Hogwarts, where she later met Harry.

She was only hiding in the bathroom when she died because she had been bullied by a fellow Hogwarts student.

Myrtle was bullied throughout her life at Hogwarts, both for her physical appearance and her personality. As previously mentioned, on the day that she died, she had been bullied by Olive Hornby about her glasses and hid in the girls’ second-floor bathroom.

I’d hidden because Olive Hornby was teasing me about my glasses. The door was locked, and I was crying, and then I heard somebody come in. They said something funny. A different language, I think it must have been. Anyway, what really got me was that it was a boy speaking. So I unlocked the door, to tell him to go and use his own toilet, and then – I died.” (CoS 299)

She was so distraught by this that after her death, she haunted Olive Hornby. But not only in life did Myrtle get bullied – this continued after her death. She had essentially no friends, not even other ghosts. Peeves – a poltergeist, mind you, not a ghost – bullied her incessantly to the point of her wanting to kill herself before she remembered that she already was dead. She was made fun of by Harry and his peers (although usually not to her face), and she herself said that her “life was nothing but misery at [Hogwarts] and now people come along ruining [her] death!” (CoS 156).

Her body wasn’t found for hours after her death.

Nobody missed me even when I was alive. Took them hours to find my body — I know, I was sitting there waiting for them.” (GoF 465)

I think of how quickly Harry and Ron came to find Hermione in Harry Potter and the Sorcerer’s Stone where they end up fighting the troll. Yet Myrtle waited hours by her physical body, no one even realizing that she was missing until a Professor asked a student to check on her.

Her murder was used to create Voldemort’s first Horcrux: the Diary.

Voldemort – then Tom Riddle – created his first Horcrux at the age of sixteen after murdering Myrtle Warren with the Basilisk. This was the first murder that Voldemort ever committed. It must be pretty awful to know that because you died, the Darkest wizard of all time was able to start splitting his soul, becoming nearly-invincible.

Myrtle may be hard to tolerate, but I can’t help but feel sorry for her. She didn’t have an easy life, nor did she have an easy death. Because of her complete lack of friends and how quickly she clung to Draco in Harry Potter and the Half-Blood Prince, you can tell she is lonely. She is hard to be around, and since she spends most of her time with herself, I can only imagine how unhappy she is.