The Protego Foundation, which fights for animal rights, is teaming up with Room of Requirement Apparel for a special T-shirt this month. This Magical Menagerie tee from RoR Apparel is limited edition and available for purchase now, with 50% of the proceeds benefitting the Protego Foundation to fight against animal cruelty.

The Protego Foundation has been around since 2015, and it took inspiration from the Harry Potter series as well as Fantastic Beasts to begin the fight against animal cruelty in the Muggle world. It was one of the first fan groups to empower other fans to join in this fight. The main goal of the Protego Foundation is “to have a wizarding community that is more considerate of the rights, feelings, and treatments of all creatures regardless of species, size, or magical ability.”

The Magical Menagerie played a significant role in the Harry Potter series. It provided Ron with a tonic for Scabbers, and it’s also where Crookshanks found his forever home with Hermione. Tylor Starr, the creator, cofounder, and program director of the Protego Foundation, shared his excitement over this design and partnership with Room of Requirement Apparel.

The Protego Foundation will be using the proceeds from this partnership to launch a campaign focused on getting companion animals into forever homes and off of the streets. We are very excited to be able to make a difference in the lives of cats, dogs, and other animals who look to [M]uggles and wizards for food, shelter, and love.

Check out the amazing hand-created shirt design along with a close-up of the logo! 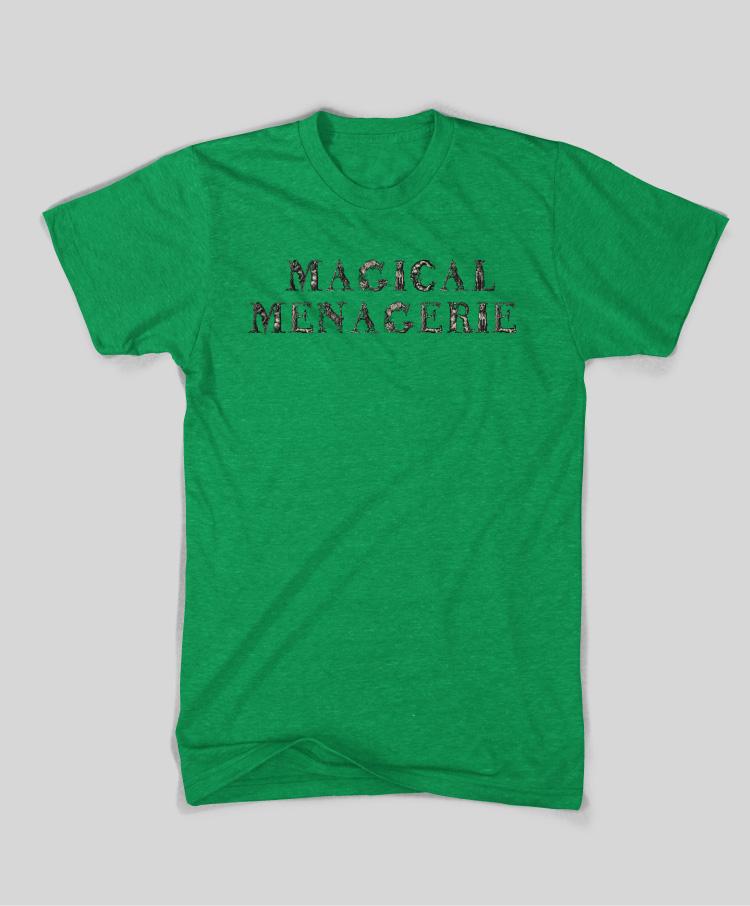 Logo of the Magical Menagerie shirt

You can never have too many Harry Potter related T-shirts, right? Especially if the proceeds are going to benefit our very own magical creatures. This special Magical Menagerie shirt is available in sizes XS–3XL through the Room of Requirement Apparel website. Tylor also talked about the urgency to order your limited-edition shirt and how RoR Apparel had been on the Protego Foundation’s radar for a while.

The Protego Foundation is so excited that 50% of all proceeds from this shirt will go to our work to make the Wizarding World fandom more compassionate for animals. The tee is limited edition, and so once the shirt sells out, that’s it! The 50% donation will be for every shirt sold until they sell out.

[RoR Apparel’s] ability to capture the magic from the Wizarding World of Harry Potter on a [T]-shirt made it an easy decision to work together on a design that speaks to our mission and also speaks to Wizarding World fans. I am so happy to add Room of Requirement Apparel to our growing roster of fan-owned companies who care about helping magical creatures.

The Magical Menagerie logo on the shirt is truly a work of art. Carrie Hoke, the owner of Room of Requirement Apparel, shared that the original wordmark is based on lettering from over 100 years ago! Brian, the artistic wizard behind the design, re-created each letter and placed them in the same format as the Magical Menagerie banner we’ve seen at Universal Orlando Resort. Carrie also spoke about her excitement for working with Tylor and the Protego Foundation.

When Tylor reached out to us, we were really excited. We already knew who Tylor Starr was because of his work with the Chickpeeps podcast. We appreciate what the Protego Foundation is trying to accomplish in regards [sic] to animal rights, and we were more than willing to help. We have our own little menagerie of rescue companions at our house, so if we had the opportunity to help, we definitely wanted to spread the magic beyond our burrow.

You could probably expect to see Hagrid or Newt sporting one of these shirts in Hogsmeade. If you want a shirt, visit the Magical Menagerie page and order yours today. Will you be sporting your love for magical creatures with one of these?