Ten Deleted “Harry Potter” Scenes That Should Have Been Included

Over the course of the eight movies, many scenes, although shot, never made it into the final films. Some of them did not add much to the movies, so it’s easy to see why they were cut. However, there were several that would have added to the films. Below are the top ten scenes that should have been included in the films.

The cut clip takes place on Christmas Day and shows the depth of Ron’s friendship with Harry. Instead of staying with his family, Ron goes up to Harry to try to help him when he’s in pain. This is especially poignant when you contrast Ron’s loud dynamic with his siblings with Harry’s quiet life without one, which highlights the longing he would have felt for them – especially after his time with the Mirror of Erised. 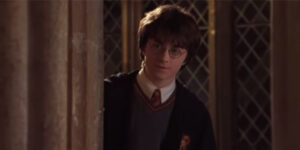 Hearing his classmates talking about him behind his back and seeing the pain on Harry’s face when he hears it is hard to watch. This moment only amplifies the isolation he would have already felt after everything he went through with Voldemort and the exposure of his ability as a Parselmouth.

Sir Cadogan was such an entertaining character in the books, and his ridiculous behavior brought some comic relief to the film.

The aftermath of the events in the Ministry isn’t fully explored in the film adaptation, and this short scene highlights just some of the grief and distance Harry would have felt after Sirius’s death.

6. Hogwarts Before the Death Eaters

This short scene occurs while Harry and Dumbledore are away and before the Death Easters arrive at Hogwarts. The hauntingly beautiful choir adds a sense of foreboding that builds the tension before the attack.

This clip added closure to the relationship between the two cousins. Without it, the audience is left with the immature Dudley from Harry Potter and the Order of the Phoenix who bullied younger kids and mocked Harry. The growth of his character is missed without this clip, as well as the hints for a potential future for the two as adults.

While this moment was not in the books and was removed from the final version of the film, it does add more to the relationship Harry has with the Dursleys. Like the moment with Dudley, the scene shows a further depth to Harry’s relationship with the Dursleys. For the first time, we see a woman who is grieved by the loss of her sister instead of just the cruel woman she often was to Harry.

The Dumbledores’ story wasn’t fully developed in the films, and this scene offers a glimpse of the resentment between the two brothers. Hopefully, we’ll be able to explore this further in the upcoming Fantastic Beasts films.

Unfortunately, their relationship was one of the ones that were condensed because of the time constraints of film, and it’s such a shame that this scene went the same way.

What did you think of the list? Are there any deleted scenes that should have been included? Let us know in the comments!