David Tennant Talks “There She Goes”, “Doctor Who”, Politics, and the Future of British Theater

This summer, David Tennant returns to the small screen in not one but two roles. Though his fictional counterpart in Harry Potter and the Goblet of Fire, Barty Crouch, Jr., struggled with daddy issues, so to speak, Tennant is a struggling dad himself in BBC One’s There She Goes, which is now on its second season. This is following Staged, a meta-production in which Tennant appears with his wife, Georgia Moffett (Doctor Who), and his Good Omens costar, Michael Sheen, filmed under the COVID-19 lockdown.

Speaking to the Guardian, Tennant made it clear that the characters he and his wife play in Staged are a far cry from their real personalities or their couple dynamic. However, as regards There She Goes, he said that Shaun Pye and Sarah Crawford’s series is all true, confessing to going up to Pye on set to say, “‘This bit we’re doing today – that didn’t really happen, did it?’ And everything is true.” Based on the writers’ real-life experience parenting a child with severe learning disabilities, the show has been both praised and attacked for not sugarcoating reality. 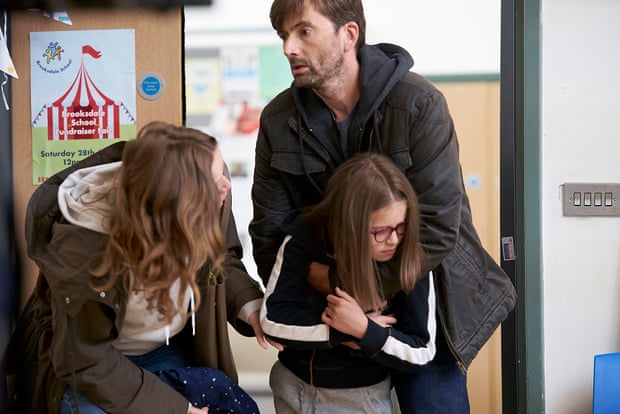 Emily (Jessica Hynes) and Simon (David Tennant) take their daughter, Rosie (Miley Locke), to school in “There She Goes”.

Tennant is an extremely versatile actor who can sell reality as well as fantasy. His brief appearance in Harry Potter is dwarfed in comparison to his fame in another serial work that has become a national treasure in the United Kingdom: Doctor Who. He reminisced fondly about the sci-fi series even ten years on:

It’s a nice show to be associated with, because people feel kindly towards it. You may not be a fan, but it sort of sits there in the cultural firmament. As a nation, I think we’re quite proud of it. […] It felt like a very different show in 2005 than it did in 1963, but it also has that link to the past – which is a positive, rather than preserving it in aspic in any way. [The Doctor is] a wonderful character to aspire to. It’s about being the cleverest person in the room, not the strongest.

However, as regards the cleverest and strongest persons in the room in real life, he professed disillusionment with today’s politics:

Ugh! It’s a very sad state of affairs. Remember when there used to be clever people? When you look back on David Cameron and George W Bush with some kind of sentimentality, you think: ‘Jesus – how low have we plummeted, when they look like better options than what we’ve got currently?’

He hopes the new Labour Party leader Keir Starmer “can fulfil his early promise,” but he remained doubtful about the his move to bail out UK theater, saying, “If one felt more inclined to trust this government, one might relax, but they haven’t exactly covered themselves in glory thus far.” Interviewed before a late £1.57bn package for cultural institutions was announced earlier this month, he was also pessimistic (or realistic?) about the future of theater in light of COVID-19:

It’s a huge bill just to keep those buildings running … We could be left with a cultural scene that’s vastly changed, and that’s a huge part of who we are as a nation. Even if the theatre is of no interest to you, even if it feels like an elitist playground, it’s places like that that all the other creative industries feed off.

In order to better the situation, Tennant is set to appear in the Royal Shakespeare Company’s new, weekly, online series, Talking Shakespeare, alongside Dame Judi Dench (Cats, Skyfall), Dame Harriet Walter (Killing Eve), and many more acting royalty. The first episode premiered on July 13, with Dench. Find out more on the RSC’s website on how to join and donate if you can to support the theater through this challenging time.