Harry Potter has grown into a global community; readers from all over the world fall in love with this magical story. As such, Harry Potter and the Sorcerer’s Stone has now been translated into 80 languages, making it easier for the beloved series to reach more and more people. To celebrate the way Harry Potter can bring communities of different nations, cultures, and language groups together, I thought I’d look into the French version of Harry Potter and the Sorcerer’s Stone and celebrate the magic behind translation.

Translating Harry Potter is no mean feat. The translation process itself is often fraught with compromises and no small amount of imagination since translators have to capture the feel and nuances of the original author’s work while still making the words make sense in the new language. For the Harry Potter series, this brings up a whole lot of questions: How do you recreate the wordplay and hidden clues that are spread across the text – from character names to places within the wizarding world? It is not simply a question of translating the plot and keeping all spells and names identical since this would mean that a lot of the magic of reading Harry Potter would be lost.

Reading Harry Potter and the Sorcerer’s Stone in French was not an easy task for a French learner who is far from fluent. In fact, the title itself is quite different since Harry Potter À L’école Des Sorciers translates to Harry Potter at the School of Witchcraft and Wizardry. However, it was a real pleasure to discover how the French language adopts and adapts the intricacies of Harry Potter and creates its own wordplay. Here are some of my favorite moments. 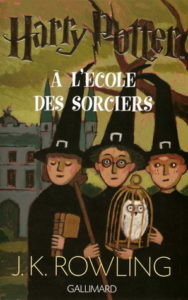 Poudlard is the French version of Hogwarts and literally translates to “lice-bacon,” or more accurately, “bacon lice,” and therefore captures the meaning behind “Hogwarts,” a pig that has some sort of skin issue. Why not literally translate “hog” and “warts” and then stick them together? Well, the answer to that is that the word would be verruecochon, which I think you’ll agree is rather more complicated than the pleasing sound of poudlard. 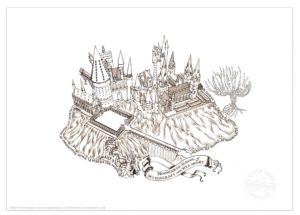 Since the name Voldemort is already French and means “flight from death,” there are no issues with its translation. However, just like in the English version, most people don’t dare say this dreaded wizard’s name and therefore use Tu-Sais-Qui or Vous-Savez-Qui, which are both ways of saying “You-Know-Who.” It was quite cool to see that this title follows one of the French grammar rules, using the tu form for speaking with friends or in casual conversations and using vous when addressing teachers, adults, or strangers. Therefore, the title changes depending on who is talking to whom. As a sidenote, Voldemort’s true name – Tom Marvolo Riddle – also had to be changed due to the wordplay that occurs when Riddle reveals his future identity as Voldemort. This means that in French, Tom Marvolo Riddle becomes Tom Elvis Jedusor. It’s rather funny to think that Voldemort’s grandfather was named Elvis. 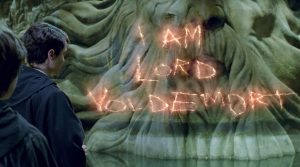 The process of translating magical objects in Harry Potter must have been rather fun as you can really use your imagination to convey the meaning and purpose of these objects. For example, the Sorting Hat is named the “Choixpeau Magique,” which combines the words choix (meaning “choice”) with chapeau (meaning “hat”). This clever combination gives you choixpeau, or “choice-hat,” with the adjective magique thrown on just to let you know that this is a magical choosing hat. A baguette is commonly known around the world as that classic French style of bread and is in fact named such because of the meaning of baguette, which translates to “stick.” Therefore, baguette magique is “magic stick,” or wand. As an English speaker, it is rather amusing to imagine the denizens of the wizarding world waving around their loaves of bread, but it is simply a good translation that makes perfect sense in the French language. 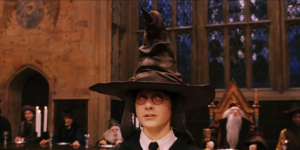 There are, of course, many other cool and interesting translations in the French translation of Harry Potter and the Sorcerer’s Stone – from the translation of Dudley Dursley’s nickname Dudleykins to Dudlinouchet in French or the Hogwarts Houses, my favorite of which is Poufsouffle. This, as you may be able to guess, is the translation for Hufflepuff. Reading a book in another language is an amazing experience and not only improves your language skills but makes you think about the ways in which language can be created and the nuances of conveying meaning. I would encourage any language learners to give this a go because if you already know the story, it makes the idea of reading a book in another language less daunting. Even if you aren’t a language learner or bilingual, take a look at the Scots version of Harry Potter and the Sorcerer’s Stone (titled Harry Potter and the Philosopher’s Stane). You’ll be captivated right from the first chapter: “The Laddie Wha Lived.”