When we think of Hogwarts, we think of food – the extravagant feasts in the Great Hall and the mouthwatering menu. Even in the Muggle world, Harry Potter can inspire people’s food creations. On MasterChef Australia, a Potter-inspired dessert was the winning dish that secured victorious contestant Reynold Poernomo his spot on finals week. 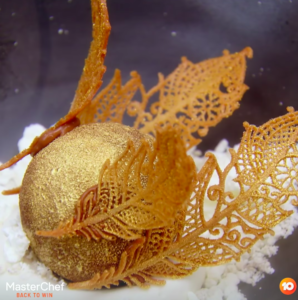 Presenting the stunning dish to the judges, Poernomo described it.

Inside is a brown butter mousse with a tonka bean caramel, coated with chocolate. On the outside is a ganache holding the honey tuile feathers. With a pear yuzu sorbet and yogurt snow.

He also shared his sentiments about his creation.

I’m really happy with this. I’d say it’s one of the most beautiful dishes that I’ve ever made to date. And in the MasterChef kitchen, I should pull this off, I’m really, really happy.

Needless to say, the judges were completely blown away by the creativity and complexity of the Golden Snitch dessert. Judge Melissa Leong gushed that it was “absolutely magical.”

The judging trio then proceeded to taste the dessert, following which they had more praises for the dessert king’s skill. Judge Jock Zonfrillo declared that it was “absolutely inspired cooking” and “first-class.” Leong agreed with him, lauding Poernomo for pulling off a culinary masterpiece.

While the Snitch looks simple to create, Poernomo admits that it was a big risk to take, and the preparation process was fraught with challenges. Since it was revealed that this immunity challenge would have no rules, Poernomo was left to decide the rules with two other contestants and was outvoted almost immediately. However, he quickly turned the situation around to his advantage. 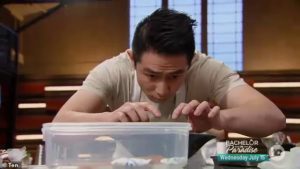 A masterpiece in the works: Poernomo delicately creates his Golden Snitch.

Fortunately for Poernomo, the final product was a spellbinding success, earning him the first spot in the MasterChef finals. Curious to find out more about the judges’ comments? You can check out the full video on Facebook. Tell us your thoughts on his Golden Snitch!