The Names of “The Ickabog” – Part 2: Ichabod

SPOILERS FOR THE ICKABOG: PROCEED WITH CAUTION

David Martin has insightfully tracked the way in which reading is bound up with goodness in Rowling’s portrayal of the magical world. His examination of the role of books in Harry Potter culminates in his observation that the sight of Snape’s groaning bookshelves at the beginning of Harry Potter and the Half-Blood Prince (the first time we ever see him without Harry’s viewpoint constricting our own) is a hint to his true allegiance. David Martin has likewise noted that The Ickabog follows this pattern: “As in Harry Potter, the good guys read books (especially Lady Eslanda) and write letters. The bad guys seem to avoid reading and writing. Lord Spittleworth has a library, but it is dusty. Further, Lord Spittleworth seems to be in several ways at war with letters. He reads (censors) all the King’s mail and blocks the mail from outside Chouxville. Spittleworth and Flapoon rely a lot on messengers and face-to-face conversations, just as the Death Eaters did.” Lord Spittleworth’s neglect of his family library (and the heroine’s unerring instinct to find it) is not just a message about books and goodness – it is a moment in which Rowling draws on books, specifically Jane Austen’s book-loving heroines: “And Marianne, who had the knack of finding her way in every house to the library, however it might be avoided by the family in general, soon procured herself a book” (Sense and Sensibility, Chapter 42).1

The most important name in The Ickabog also has a literary heritage, for (when read aloud) “Ickabog” is almost identical with “Ichabod” – a name known primarily for being the protagonist of Washington Irving’s short story “The Legend of Sleepy Hollow” (1820). Like The Ickabog, this story revolves around a mysterious bogeyman – in this case, a supernatural Headless Horseman – and its unprepossessing hero whose self-worth is dented by a terrifying encounter with this mythical monster. Irving’s story, like Rowling’s, is highly comic and told at the expense of its central character who, having read Cotton Mather’s “History of New England Witchcraft,” becomes a believer in ghosts. The narrator’s wry attitude to the Headless Horseman (who would certainly be welcome in the Headless Hunt) is reminiscent of the comedy which surrounds the Hogwarts ghosts, in particular Nearly Headless Nick. Irving writes, “Besides, there is no encouragement for ghosts in most of our villages, for they have scarcely had time to finish their first nap and turn themselves in their graves, before their surviving friends have travelled away from the neighborhood; so that when they turn out at night to walk their rounds, they have no acquaintance left to call upon.” (There is also a giant, spooky tree in Sleepy Hollow with more than a touch of the Whomping Willow about its “gnarled and fantastic limbs.” It “groans as it rubs one huge bough upon another…twisting down almost to the earth, and rising again into the air.”) 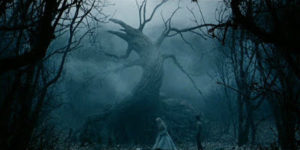 The Tree of Dead 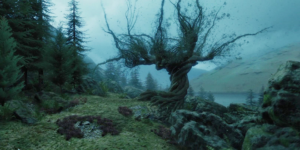 Irving’s famous short story has very much the same style of self-conscious narration as The Ickabog. Rowling chats with her reader throughout (“Let’s allow Bert to walk on without us for a moment or two, so I can tell you about the coach”); in a similar vein, Irving comedically imagines his narrator entering the time-world of the fiction: “I want breath and time to discuss this banquet as it deserves, and am too eager to get on with my story. Happily, Ichabod Crane was not in so great a hurry as his historian, but did ample justice to every dainty.” Food, indeed, is another link between the two texts, for Sleepy Hollow is as abundant in edible delights as the fairy tale world of Cornucopia. While “the bakery windows of Chouxville were piled high with delicacies such as Maidens’ Dreams, Fairies’ Cradles, and, most famous of all, Hopes-of-Heaven” (Chapter 1), Ichabod looks forward to “dainty slapjacks, well buttered, and garnished with honey or treacle” and views “such heaped up platters of cakes of various and almost indescribable kinds, known only to experienced Dutch housewives! There was the doughty doughnut, the tender oly koek, and the crisp and crumbling cruller; sweet cakes and short cakes, ginger cakes and honey cakes, and the whole family of cakes.”

“The Legend of Sleepy Hollow” has an interesting relation to The Ickabog given the central mystery in Rowling’s story as to whether or not the monster is real. Throughout “Sleepy Hollow,” as throughout most of The Ickabog, the central character’s belief in the monster is presented as foolish, and Ichabod’s credulity is played upon by a rival with a pumpkin just as Fred’s is by the fake Ickabog and the fake Ickabog foot. But while “Sleepy Hollow” primarily presents Ichabod’s belief in ghosts as foolish, Irving also threads his tale with phrases from Hamlet (Ichabod is “quite chapfallen,” and when he sets off, “it was the very witching time of night”) – piquant reminders of the most canonical ghost story. Irving enjoys raising a gothic frisson in his reader and then leaves the ending of his story slightly opaque, setting the stage for a fully supernatural version in which the Headless Horseman is real: Tim Burton’s 1999 film Sleepy Hollow. In this reworking, the plot of Irving’s original story becomes a subplot. In the first half of the film (just as in the first half of The Ickabog), the mysterious bogeyman is not real, and the apparition that terrifies Ichabod is, in reality, a young man with a pumpkin (just as the apparition that terrifies the king appears to be merely a dog caught in some brambles). But then, after introducing the fake Horseman, the film delivers the same twist as The Ickabog – the mythical monster is real after all.

And there is a further startling layer behind the name of the Ickabog. Rowling’s plot and narrative lightness of touch have some close connections with the main literary source of the name “Ichabod.” But the message of her story – a message about how fear breeds hate – also shares resonances with the biblical source of that name, and Ichabod’s blighting by his terrible birth is a story we have seen before in the history of Voldemort. Voldemort has a terrible conception from a loveless union, a terrible birth from a woman dying in misery, which Rowling has described as prejudicial to his chances of being able to love. And the biblical Ichabod, likewise, is born at a moment of great personal misery and national calamity:

As the Ickabog explains to Daisy, “What we’re doing and what we’re feeling when our babies are Bornded gives them their natures. It is very important to have a good Bornding” (Chapter 54). The biblical Ichabod is given a name that speaks of the despair – of both his mother and his nation – at the moment of his birth. The tragic story of Ichabod’s birth – a terrible birth at a moment of personal and national misery – and its suggestion of the moment of birth as fate appear to have been a major source for the Bornding-plot within The Ickabog.

In The Ickabog, as always with Rowling, there is much food for thought in following up with the sources of her names.

1 For more on Austen in Rowling’s work see my “Communities of interpretation in Jane Austen and Harry Potter” in Open at the Close: Literary Essays on “Harry Potter,” ed. Cecilia Konchar Farr (Jackson, MS: University of Mississippi Press, 2020/1), forthcoming.