There are not many activities that Voldemort and Harry Potter fans alike participate in, but a rather curious one seems to have emerged recently: grave hunting. Unfortunately, this has resulted in unexpected consequences. Greyfriars Kirkyard reports that its cemeteries are facing significant soil erosion due to the hundreds of Potter fans searching for Voldemort’s gravestone. 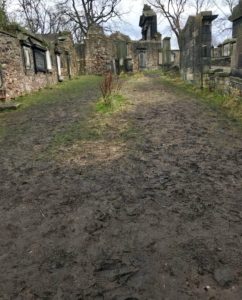 Have you seen You-Know-Who’s grave before?

In a tweet published by the City of Edinburgh Council Cemeteries, the council shared that “Greyfriars Cemetery [is] sufferimg [sic] [from] significant erosion on [the] ground around Tom Riddell #HarryPotter #LordVoldemort (Tom Riddle) grave due to 100,000’s [sic] of visitors. It’s great the cemetery is so popular, so we are looking at solutions.” Thomas Riddell was a general who died on November 24, 1806, at the age of 72. Although it has never been officially confirmed, it is widely believed that J.K. Rowling spent a significant amount of time at this cemetery. Together with the similarity in name, this has fueled speculation that Thomas Riddell serves as the original inspiration for Lord Voldemort’s name.

At Greyfriars Kirkyard, the air abounds with rumors and conspiracy theories, since there are other gravestones that could have potentially inspired the names of other characters. As the Scotsman reports, the graves of Mr. William McGonagall and Mrs. Elizabeth Moodie could be the namesakes of our Transfiguration and Defense Against the Dark Arts professors, respectively.

The problem of soil erosion is not unique to Greyfriars Cemetery. Earlier this year, the beloved gravesite of Dobby had to be relocated as a result of environmental damage to the local beach. Furthermore, there are additional concerns of privacy, since the high influx of tourists might disturb the peace of family members who are mourning their deceased loved ones there.

What are your thoughts on these issues? Share with us your ideas and potential solutions below!