SPOILERS FOR THE ICKABOG: PROCEED WITH CAUTION

The Ickabog has brought much joy during the pandemic – with an astonishing five million visits on the first day – but it almost didn’t see the light of day. J.K. Rowling wrote the first draft of it “in fits and starts between Potter books, intending to publish it after Harry Potter and the Deathly Hallows,” and one of the first times she mentioned it in public was in the documentary A Year in the Life (filmed between October 2006 and October 2007). She is filmed writing and responds to the question “What are you writing now?” with “a story that I describe as a political fairy tale and it’s for, I think, slightly younger children, and so that will probably be the next thing that I finish.” 1 According to one interviewer, however, she had already finished The Ickabog in January 2006: “A new children’s book is also complete. It is about a monster and is what Rowling calls a ‘political fairy story.’ It is aimed at children younger than those who read Harry Potter: ‘I haven’t even told my publisher about this.’ There are also some short stories already written.” (Should we now be watching out for those short stories?) Rowling did not publish it though, turning instead to writing for adults; although, she reminded people of its existence when she wore it at her 50th birthday party (Halloween 2015): “The theme of my 50th birthday, which I held at Halloween, even though that’s not really my birthday, was come as your own private nightmare. And I went as a lost manuscript. And I wrote over a dress most of that book.” (Presumably, Rowling’s guests were too couth to spend the whole time trying to read her dress – it’s what I would have been doing.) That was pretty much the last we heard of it until a fan asked about it on Twitter (March 19, 2016), and Rowling replied, “I didn’t like it enough to publish it. It’s in a drawer!” Kudos to the Rowling Library who may have given her the idea for her generosity when it responded to this tweet with the suggestion that she should “publish it for free online.”

The Ickabog is full of the hallmarks of Rowling’s narrative charm. It is full of jokes – from Fred and the wasp to a monster that hops, forces its victims to give it English lessons, and says “roar” to sound scary. The inclusion of birthday presents in Spittleworth’s estimates for the cost of maintaining the Ickabog Defence Brigade has a very Blackadder ring to it: “Well, yes, sir, the land will cost tuppence-ha’penny, but there are many other factors to be considered: stamp duty, window tax, swamp insurance, hen food, dog biscuits, cow ointment – the expenses are endless” (Blackadder, Series 3.1 “Dish and Dishonesty”). And was there a nod to Python’s Life of Brian in the heroic Captain Beamish being the son of cheesemakers? (Blessed are the cheesemakers after all.)

The Ickabog also has many echoes of Harry Potter – both in terms of scenes/characters and structure. The introduction of the terrifying yet friendly Ickabog recalls Harry’s first meeting with a giant: It feeds the startled and malnourished children steaming hot meat pies, while Hagrid feeds Harry blisteringly hot and delicious sausages. Bert and Roderick slipping off at the climax to do something essential away from the main action had a very Ron-and-Hermione-nip-off-to-fetch-Basilisk-fangs feel to it. Some of the chapter titles include a nod to those in Potter – Chapter 32 “The Flaw in the Plan” echoes (or is it pre-echoes if The Ickabog was written first?) Chapter 36 in Deathly Hallows, while Chapter 46 “The Tale of Roderick Roach” recalls a frequent form of Harry Potter chapter titles – “Hagrid’s Tale,” “Kreacher’s Tale,” “The Prince’s Tale,” and “The Tale of the Three Brothers” – all of which point to the titles of Chaucer’s Canterbury Tales.

In terms of structure, Rowling has written The Ickabog – like all her work – in a ring structure. The plot follows a retributive and redemptive arc in which the medal given to Bert for his father being shot by Flapoon saves him from death when “Flapoon Fires Again” (Chapter 61). The tragic snowdrops that appear in Chapter 4, laid on Daisy’s mother’s grave, reappear four-ish chapters before the end as charming symbols of hope, distributed by the Ickabog. The “tasteless, rubbery mushrooms” of the Marshlands in the opening chapter become the perfect mushrooms – “every single one of them as beautiful as a pearl” – of Ickaby in the closing chapter. The final chapter replays the opening chapter, and the titles of the two chapters – “Cornucopia” (Chapter 1) and “Cornucopia Again” (Chapter 64) – draw attention to this circle as well as hearken back to one of the most important circles in the Harry Potter books – “The Forbidden Forest” is the third-to-last chapter of the opening novel, while “The Forest Again” is the third-to-last chapter of the final novel.

The Ickabog was first written around 2005-2007, and the name of the prime minister “at the time of which I write” being “Gordon Goodfellow” points to an ending or redrafting sometime around June 27, 2007 (when Gordon Brown became prime minister). It is, therefore, probably the case that The Ickabog has influenced some of Rowling’s later writing rather than the other way around (as it feels to us reading it in 2020). The idea for The Casual Vacancy came while Rowling was on her USA book tour for Deathly Hallows, and therefore, the Marshlands (the impoverished area in The Ickabog) is likely the inspiration for naming the impoverished area in The Casual Vacancy as the Fields. There is a pre-echo of Fantastic Beasts here too with Daisy’s authoritative books on the misunderstood Ickabog. Jacob Kowalski’s delightful baked beasts, likewise, are prefigured in Bertha Beamish’s “Ickapuffs, which were the lightest, fluffiest pastries you could possibly imagine, all covered with a delicate dusting of peppermint chocolate shavings, which gave them the appearance of being covered in marsh weed” (Chapter 64). 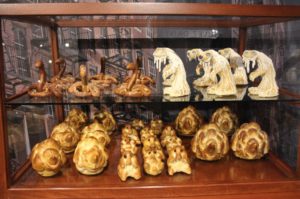 Probably, however, the aspect of The Ickabog that is most quintessentially Rowling is its delightful – and cratylic – names. Cratylic names accurately describe the nature of the character who bears them, and The Ickabog’s cratylic names range from the comically overblown (Professor Fraudysham) to the relatively subtle, such as Withers the groom – “withers” being a part of a horse, made famous by Hamlet’s quote “Let the galled jade wince, our withers are unwrung” (3.2.231). And as always, the source of many of Rowling’s names is literary. Both The Ickabog and Harry Potter, for example, have an incidental but upright character called Ogden – a name I suspect Rowling likes because it belongs to the brilliant comic poet Ogden Nash.

The ruler of Pluritania – King Porfirio – has a particularly satisfying cratylic name. One of the reasons I like it so much is that I have just completed a piece on the influence of Keats’s “Lamia” on Rowling’s work.2 Published alongside “Lamia” in Keats’s 1820 volume of poems is “The Eve of St. Agnes” – whose hero is called Porphyro. And it is certainly the case that the gentle rebuff offered to Porfirio by Lady Eslanda at the end of The Ickabog (that he must stop treating women as objects to exchange for food) could be leveled at Porphyro too as he attempts to seduce his beloved with one of the most luscious piles of food ever assembled:

And still she slept an azure-lidded sleep,
In blanched linen, smooth, and lavender’d,
While he forth from the closet brought a heap
Of candied apple, quince, and plum, and gourd;
With jellies soother than the creamy curd,
And lucent syrops, tinct with cinnamon;
Manna and dates, in argosy transferr’d
From Fez; and spiced dainties, every one,
From silken Samarcand to cedar’d Lebanon.”

But Porfirio is a brilliant cratylic name for another reason too. Like his Keatsian namesake and most suitably for a king, Porfirio is named after Imperial Porphyry – a stone linked to rulers since Roman times. Emperor Tiberius, intoxicated by the way its color echoed imperial purple, decreed that Imperial Porphyry (as it came to be known) could be used only for the emperor’s palaces and statues. A circle of porphyry was placed on the floor of the Pantheon to mark the spot where new emperors stood to be crowned, and Nero started the fashion for emperors to have tombs fashioned from Imperial Porphyry. (It was for this reason that Napolean wished to be buried in an Imperial Porphyry tomb, but by this time, the single source of the stone – the mountain Mons Porphyrites in Egypt – had been lost.) 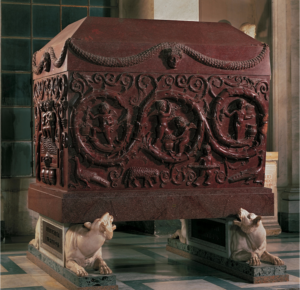 Rowling draws subtle attention to this source of Porfirio’s name in the suit that Fred wears to greet him: “The King of Pluritania came to pay a formal visit to Fred (still hoping, perhaps, to exchange one of his daughters for a lifetime’s supply of Hopes-of-Heaven) and Fred decided that he must have a brand-new set of clothes made for the occasion: dull purple, overlaid with silver lace, with amethyst buttons, and grey fur at the cuffs” (Chapter 3). English royalty often compliment foreign countries during formal visits by the colors they wear (an idea that was begun by the Queen and continued by the Duchess of Cambridge), and Fred’s new outfit perfectly echoes the color of Imperial Porphyry – a purple stone studded with white. It is Fred’s entitlement over this gorgeous new suit that causes the tragedy of Daisy’s mother’s death, and the anti-royalist message of The Ickabog – and the over-bearing attitudes of its kings – is encapsulated by a stone that Roman emperors decreed must only be used by themselves.

Another of my favorite names in The Ickabog is the perfect cratylic name of Dan Dovetail, the carpenter. “Dovetail” is a carpentry term – an ancient and ubiquitous joinery technique found in ancient Egyptian furniture as well as every drawer in your home. By giving her carpenter a joinery name, however, Rowling is also playfully alluding to Shakespeare’s A Midsummer Night’s Dream in which two of the characters are, likewise, carpenters with joinery names: Snug the Joiner and Peter Quince (“quines” being a type of wooden wedge). (And this is not the first time Rowling has drawn on A Midsummer Night’s Dream for names.) The carpenter’s surname, of course, also belongs to his daughter – the true hero of the story – and in her, it is fitting for another reason. Daisy Dovetail is peace-bringing, like a dove, but she is also the person who makes everything fit together, finally dovetailing the lives of Ickabogs and humans in a way that will save them both.

Rowling continually charms with her names, and The Ickabog is no exception. I loved her variations on “Ickabog” – the town Ickaby, the sibling Ickabob, and the baby Ickaboggle (a name that made this reader, at least, think of the delightful name of baby puffins: pufflings). Ickabogs are named (in part) after the icky bog from whence they come, but they also have a fascinatingly apt literary heritage, which I shall discuss in part two tomorrow.

1 Thanks to Nick Jeffrey for finding this reference.